Guardians of the Galaxy Vol.2 enhances the first film, James Gunn's terrific blend of awestruck space opera and deliciously irreverent pop-culture obsessed comedy, rather than improving it. It's pretty much what we got out of the original, not much more, and not much less. I understand that this doesn't sound like the most passionate of endorsements, but considering my love for the first Guardians, which I still think of as the best Marvel movie and one of the best films of 2014, I'm more than wholly satisfied to be met with the same level of quality.

Yes, the first sequel does its typical first sequel thing, and takes what the audience loved about the first film and delivering more of it with slight tweaks. Yet there's still an undeniable amount of genuine ingenuity and charm that keeps pumping fresh blood into this franchise, instead of studio suit-infused condescension that treats fans as if they're seals at an aquarium, ready to gulp down anything familiar thrown into their gullets. Most cynical cash grab sequels bring us more of the SAME, Guardians of the Galaxy Vol.2 delivers MORE of the same. 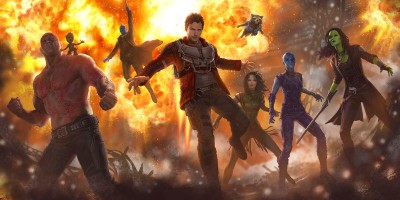 Let's start with the overall theme. The first Guardians focused on the importance of friendship, forcing a group of galactic oddball misfits to work together for a common good, while finding their own self-worth through their connection with others in the process. Vol. 2 takes this a step further and becomes an allegory on the concept of "family". Gunn's script, which carries a surprising amount of emotional depth considering the sequel's deft handle on the original's brand of self-proud goofy humor, takes inspiration from the many literal and figurative family-oriented sub-plots in the story to form a complex yet instantly relatable take on what it truly means to be part of a family.

A "parental love triangle" plot that culminates in the most striking use of a Cat Stevens classic in any film I can think of, a sibling rivalry with many violent yet touching turns, an overall upgrade to the bond between the guardians, Gunn delivers a strong narrative foundation to support his many appropriately over-the-top and colorful action set pieces. Speaking of which, from a hilarious single take opening battle that focuses on the adorable Baby Groot, all the way to a massive classic anime-inspired fight sequence that somehow finds a way to organically incorporate an 80s video game icon, Vol. 2 presents a bevy of original and visually inventive action sequences that rival those found in the first film.

It was obvious from the title alone that Guardians of the Galaxy Vol.2 would repeat the first Guardians' inventive use of 60s and 70s pop hits, perfectly complimenting the franchise's borderline psychedelic visual palette. That approach is also enhanced a bit, as the song selections not only fit the tone of any given scene, but also narratively support the themes of the story. Alongside the aforementioned brilliant use of a Cat Stevens track, a Fleetwood Mac classic builds on the climax, while a Looking Glass song is even used to explain an important piece of character motivation.

The outcome is simple: If you loved Starlord and team's first outing, then you'll love Guardians of the Galaxy Vol.2. If you thought Gunn's unique blend of absurdist space fantasy and pop-culture nostalgia was too grating to begin with, then stay the hell away. Also, Michael Rooker is a goddamn national treasure.