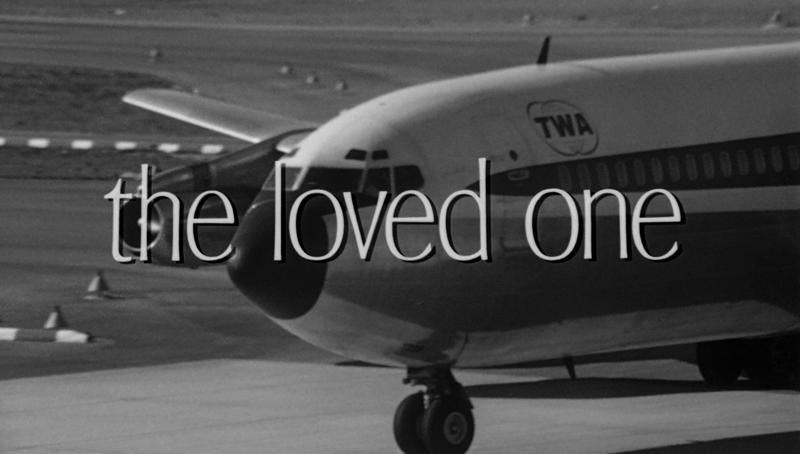 
The Movie
When I was in college, I took an English class titled "Gothic and Grotesque," which focused on dark and disturbing literature. Among the books we read in that class was Evelyn Waugh's The Loved One, a slim novel about Hollywood and the funeral business. I was immediately hooked on the insanity of the plot, the unique characters, and the satirical way the story portrayed the death industry. As part of the class, we watched a scene from the film, but I never saw the entire film, as the VHS tape was out of print and I didn't have a laserdisc player. Many years later, Warner Brothers finally graced us with a DVD release, and now, a Blu-ray edition, via their Warner Archive Collection.

The story follows Dennis Barlow (Robert Morse), an Englishman who's come to America to seek his fortune. An aspiring poet, he doesn't have any skills, but he does have a relative in Sir Francis Hinsley (Sir John Gielgud), who works for a Hollywood movie studio. Sir Francis introduces him to the British community in Hollywood, and finds he doesn't quite fit in, as despite having just arrived from England, he's not English enough for the expatriates.

An untimely end for Sir Francis' however brings Dennis into contact with the staff of Whispering Glades, the Disneyland of cemeteries. Led by The Blessed Reverend (Jonathan Winters) and head embalmer Mr. Joyboy (Rod Steiger), the cemetery's cult-like staff helps "the waiting ones" inter their "loved ones." There's one staffer that catches Dennis's eye, and that's Aimee Thanatogenous (Anjanette Comer), a naive, young cosmetologist who believes in only aesthetics (and the Reverend) and lives her life according to the advice of a newspaper columnist. Dennis woos her with poetry he didn't write, but her affection is for Joyboy, who crafts the smiles of the dead. 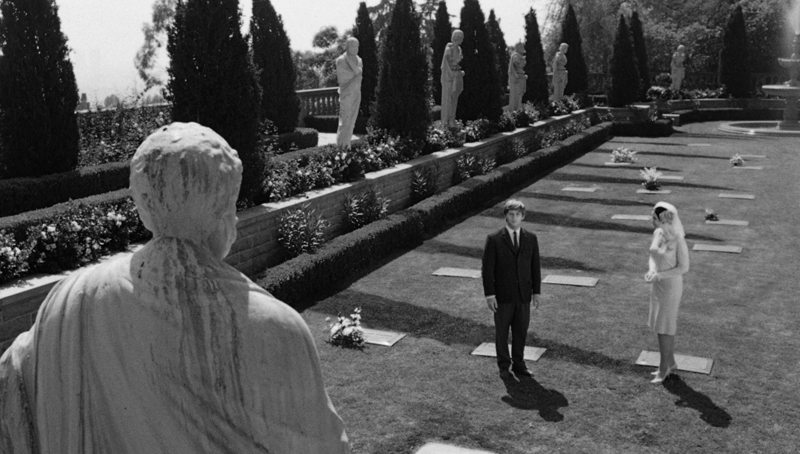 The underlying plot, a love triangle involving hidden identities, is rather pedestrian, but the rest of the film is anything but. Joyboy is one of the most disturbing characters seen on celluloid, and is deserving of a film all to himself, while a plan to launch corpses into space to maximize cemetery profits drives the film to its conclusion (an addition not found in the original book.) The subplots are somewhat episodic, involving drunk strippers, hookers in caskets and the burial of animals, and they serve to poke further fun at American values, misplaced or otherwise, even if they don't quite flow together well. The ending of the film wraps all of this up as logistically as possible, but whether it is satisfying is another story altogether. Honestly, it would be hard for any ending to live up to the expectations built by watching an insane woman rip apart a whole pig in her bed.

Director Tony Richardson (Oscar winner for Tom Jones) did an admirable job of attempting to bring the film's disparate (and, in the case of the space-age rocket subplot featuring Paul Williams, occasionally unnecessary) elements together with a classic look that gives way to a bit of ‘60s-era wackiness at times, and all-star writers Terry Southern (Dr. Strangelove) and Christopher Isherwood gave him plenty (perhaps too much) to work with in padding out Waugh's efficient cark comedy. Southern's fingerprints are obvious, with plenty of similarities to Dr. Strangelove, thought it certainly doesn't hit the same type of heights. Despite being billed as "the motion picture with something to offend everyone", it's barely shocking a post-John Waters world, though the bleaker gags and surreal moments can still have some impact.

The cast, which includes cameos by James Coburn, Milton Berle, Roddy McDowall, Tab Hunter and a shockingly low-key Liberace, is quite good, led by Steiger's fascinatingly mad (and delightful) turn as Joyboy, far outshining Morse's hard-to-root-for hero. Gielgud gives perhaps the best performance of the film, establishing a sense of sad reality, before the film ascends into farce, whiler Jonathan Winters is enjoyable in dual roles (one well villainous), along with Comer, whose acting is something of a mix of Madeline Kahn and Julie Hagerty. She's something to to behold as the story's key victim, portraying an innocent adrift in a world she's ill-equipped to live in. 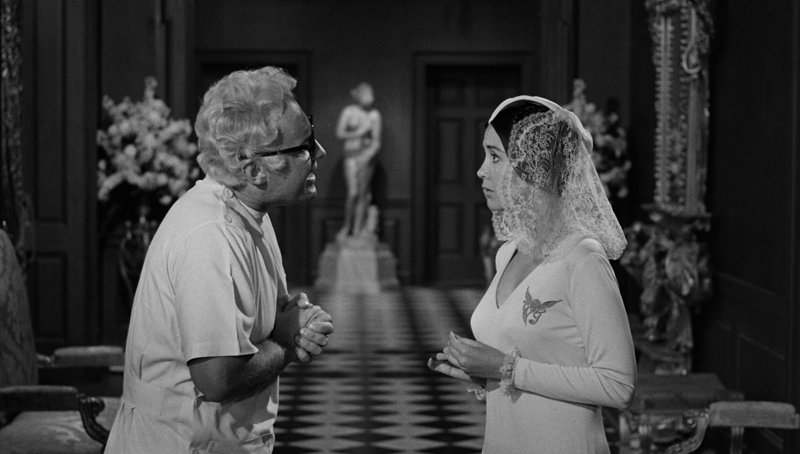 The Disc
Delivered as a one-disc release in a standard Blu-ray keepcase, The Loved One features the poster art as a static menu, offering options to watch the film, check out the extras and adjust languages. (Oddly, the scene selections available on the DVD are not included here.) The only language option is for English subtitles, which again is a step down from the DVD, which had French audio and French and Spanish subtitles.

The Quality
The 1080p, AVC-encoded 1.78:1 transfer here is lightyears ahead of the previous DVD in basically every possible way. Contrast has been drastically improved (with accompanying boosted black levels) and the level of fine detail is remarkably better, with impressive sharpness throughout the image. Stability has been improved here (removing the jitters that could be seen on the DVD) and dirt and damage has been mostly eliminated, resulting in a beautifully clean image. The only issue you could find is in the grain (which was previously excessive) and in this new version it looks rather noisy if you're on top of the screen or watching an enormous screen. From a proper distance, it looks great.

The audio is presented in a mono mix that's delivered in a DTS-HD Master Audio 2.0 track. Dialogue is clean and crisp, with a nice depth to it, while the score, which is key to several scenes, is nice and strong. There are no complaints about the audio on this release.

The Extras
Though it wasn't likely that this release would add anything new to the party, at least the extras from the DVDs return, including a 15:12 featurette, "Trying to Offend Everyone," that brings together some of the cast and crew, including Comer and Morse, and provides a loving look back at the film's production and the people involved, many of whom have become "loved ones", as well as the film's reception. After watching bigger, more popular films get lesser treatments, it's nice to see a film like this get at least a modicum of DVD respect.

The other extra is the film's theatrical trailer, which is your standard wacky '60s trailer, the kind that are always fun to look back on. It's in pretty decent shape, and is a good artifact to have included. 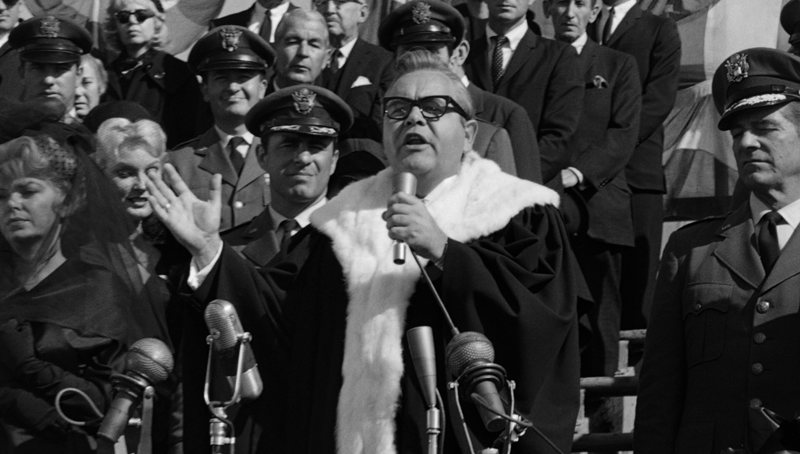 The Bottom Line
The Loved One has all the dark and unusual elements to be a cult classic, but it's more clever than laugh-out-loud funny, and is something of a mess thanks to its abundance of subplots. However, it is certainly intriguing, with several wonderfully weird performances, and should appeal to fans of films like Dr. Strangelove and The Ruling Class. The presentation is quite nice, and the few extras return from the DVD, making it worth picking up if you don't have the previous release and want to see the kind of film that doesn't get made these days.