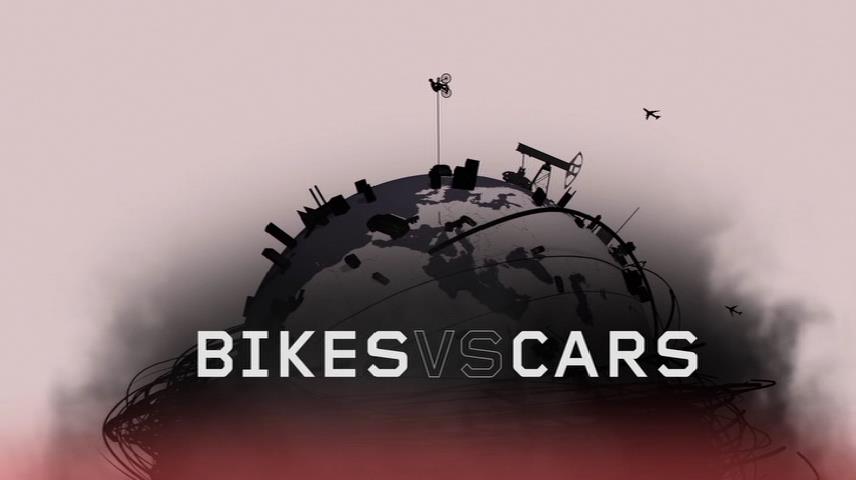 ….or A Tale of Five Cities: Los Angeles, Sao Paolo, Copenhagen, Toronto and Bogota are the main focus of Swedish filmmaker Fredrik Gertten's cross-continental look at the ever-present problems of humans' desire to get from Point A to Point B as easily and quickly as possible. Having spent the entire 1980s in the city of Davis, CA which is regarded as at least one of the world's bicycle capitals (another city claims that honor here) I've had drilled into my head for a long time the idea that cars are costly, consume too much energy and cause pollution while bicycles consume no energy at all and keep frequent riders in top physical shape. With that in mind you'd think bikes would be the preferable way to travel, but when you're lazy it seems so easy to just get in your car and drive, plus of course you can go much further in less time in a car than you can on a bike. (My current commute to work by car is 30 minutes, it would be several times that if I rode my bike.)

Gertten not only looks at these cities but in many of them also at people who are strong advocates for bike-riding. Take Dan Keoppel who hates cars and driving, and also wonders why he lives in Los Angeles which is one of the car capitals of the world. He takes us through a bit of history of transportation in that area- in the early 1900s there was an elaborate bike path called the California Cycleway that connected LA and Pasadena, and we get to see what little of it remains today. We're also reminded that Los Angeles once had a very big trolley system which was at least a bit more energy-efficient than everyone driving their own car, but that was gradually dismantled in part by "shell companies" funded by General Motors which of course wanted more people to drive. Today there are so many cars on the road that it's actually slower to drive to some places rather than bike or walk. The last time I visited that city I got a bit fed up with the traffic and when deciding to head back to the northern part of the state, it seemed to take forever just to get out of the city as the freeway leading out was stop-and-go for several miles (which poses a question I've had for a long time- has anybody ever seen the FRONT of a traffic jam? Someone should find and film a bunch of those!) Meanwhile a staggering .8% (yes, that's a point there, meaning less than ONE percent) of LA residents are said to commute by bicycle.

In Sao Paulo, Brazil, the 20 million people who live there seem to love their cars as well but it's gotten to the point where there's hardly even any room for them all. Just the few seconds of traffic jams shown here are enough to make me not want to go there, as a few locals rightfully complain about how long they take to get through. The city has its share of bicycle advocates, but they feel edged out by the cars and say that an average of one bike rider is accidentally killed in the city each week. Many of them are commemorated by "ghost bikes", painted white and placed at the place of the accident, which I've seen plenty of here in Sacramento as well. Meanwhile up in Toronto, the rather crazy mayor Rob Ford declares an end to the "war on cars" from all the damn bicyclists there and gets rid of the city's bike lanes to make room for one more lane of cars to drive in- after all, he reasons that it's so cold there in the winter that nobody wants to ride a bike there anyways, even if the movie shows evidence to the contrary. Back down the continent in Bogota, it's said that there's a stigma that if you're seen riding a bike it's because you're "too poor" to own a car, but in Copenhagen (Denmark) the streets are overrun with bicycles (more in that one city than the ENTIRE United States) and we hear a taxi driver complain about their always being in the way.

It's pretty clear from the beginning that this documentary favors bikes in the title battle, but gives a gathering of auto enthusiasts in Irvine some equal time saying that while they do love their cars they don't want to contribute to air pollution and favor efforts to reduce that. Still some dirty laundry is aired about the situation in Europe where politicians were paid off by car and oil companies to hold off on too many restrictions, showing that this isn't just an American problem. Overall this is a quite entertaining and enlightening documentary, even though it doesn't really get to a definite answer as to how to solve the problems presented. I certainly don't like traffic jams but riding my bike to work would still take longer, and I can't adhere strictly to the public transportation schedule which if everyone used would keep a lot of cars off the freeways- so I'll admit I'm part of the problem. Not spending much time in Los Angeles I didn't know about the sketchy history of public transportation there (the trolley system was gone by 1960) but am quite familiar with the BART train system in the San Francisco area which began in 1972, so perhaps the state of public transportation isn't quite as bleak as might be suggested. 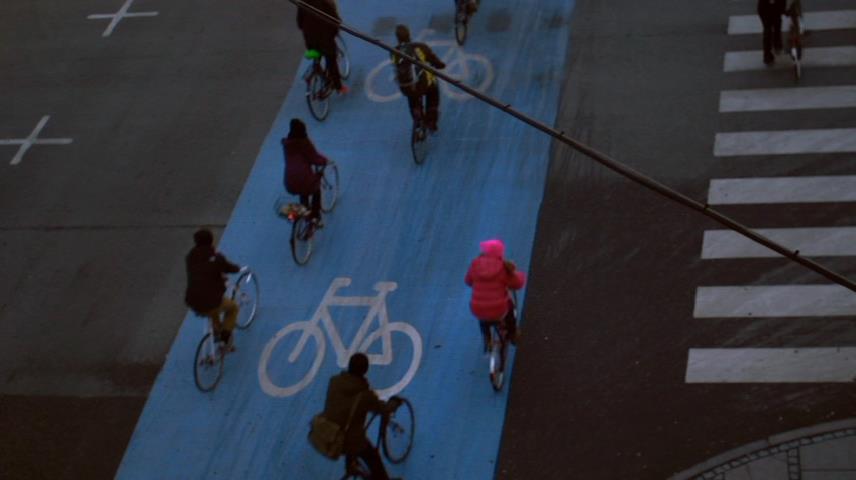 The 16x9 picture appears to have been shot mostly on hi-def video in 24 frames per second, with some TV and film footage included. It looks reasonably good on this dual-layer DVD, though it would obviously have looked much better on Blu-Ray. While documentaries in general often have to make do with less-than-optimal lighting and weather conditions, there's hardly a bad-looking shot here.

The DVD comes with both Dolby Digital 5.1 and 2-channel mixes. The 5.1 track keeps the sound mostly up front, but it conveys the ambient sounds of cars on the road very well along with Florencia DiConcilio's quite captivating music score. It doesn't seem complex enough to suffer being mixed down to 2 channel playback, but the separate track is included for that nonetheless. 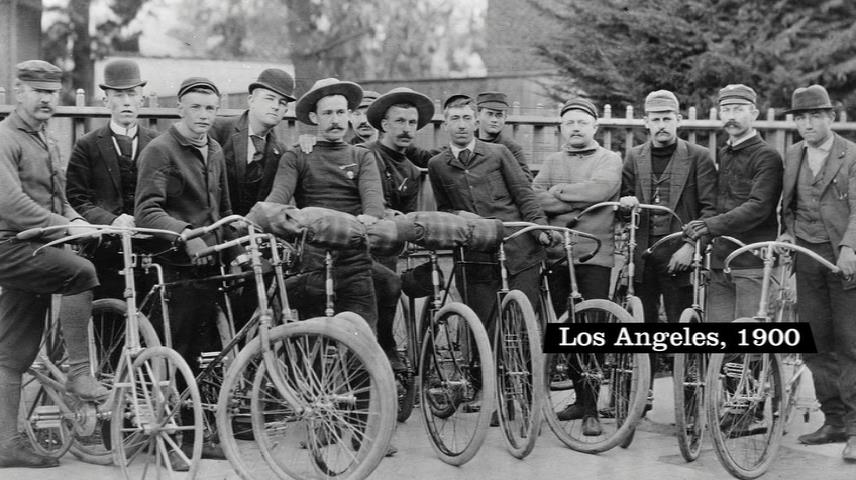 Along with a trailer for the documentary, we get a decent-length interview with director Fredrik Gertten who discusses how he chose the people and places that appear, among other things. There's also a "short film" that plays a bit like a commercial, showing a contraption that works like an airbag for your head- persons shown appear not to be wearing anything on their heads, but should they crash into anything the "helmet" inflates and protects the riders. This seems like an interesting idea, but I'm not sure if I'd trust it- although I was reluctant to wear a bike helmet for a long time being in TWO crashes in a couple of weeks years ago now makes me feel incomplete riding without one. 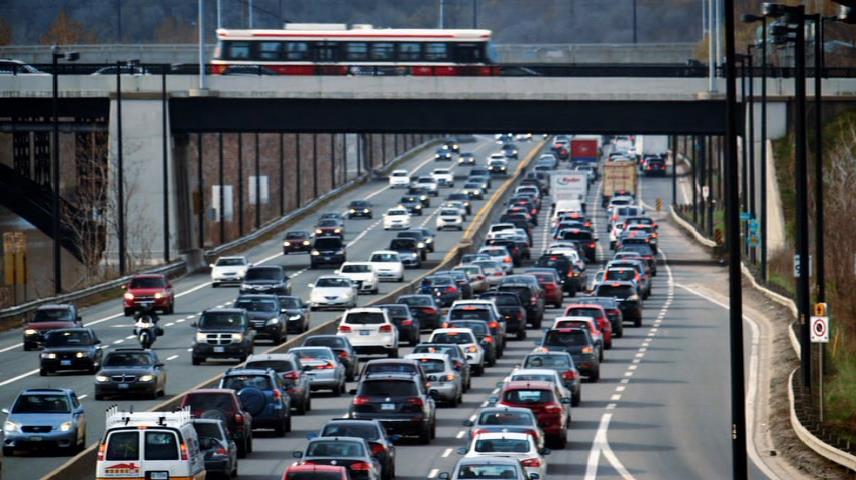 Anyone living in a big city has likely been frustrated by transportation being inconvenient, slow and sometimes dangerous. This documentary presents plenty of examples of that, but doesn't quite come up with an easy answer as to how to solve the problem. It does tell us though that an increase in bike riding would at least be a start, though exactly how to promote that more is a bit up in the air. One solution that isn't mentioned is plain old walking, which I've done quite a bit of in my city and found quite enjoyable- perhaps that can be the subject of another documentary.