For fans of the franchise, the draw to this comic-book-like vision of a viral apocalypse is not just the ravaging hordes of zombies hunting the last remaining uninfected humans of Earth. It's the central badass heroine Alice surviving this dark, infested hellhole, kicking the butts of the walking dead and not tolerating any lip from anyone who underestimates her, all the while looking good in spite of probably not showering for a few weeks. (The last time was in the previous entry when she and Claire battled the Axeman in a stylish prison shower scene.) In Resident Evil: The Final Chapter, director Paul W.S. Anderson returns once more to the series (the only notable worthwhile project of his career outside of Event Horizon and to a lesser degree, Soldier) to finally answer the mystery behind Alice's origins, her abilities and her role in the Umbrella Corporation's master plan for world domination. I'm not really sure anyone was asking these questions or for an answer to them, but Anderson is determined to remedy that in this sixth and final conclusion to the franchise.

Whether he plans to keep that promise, we'll never know since each installment over the last fifteen years has been rather sporadic and on the fly. None of the five previous movies ever hinted at a larger end goal or as though guided by an overreaching plot aimed at a solidified objective. Each entry has felt as though someone was writing the script while going along or while in the middle of production, and Anderson takes writing credits in all six movies. With all the zombies supposedly gone worldwide, there is a massive cleanup job for the last remaining uninfected, so expect "Resident Evil: The Restoration" in a few years. Or, maybe the T-virus somehow resurfaces and pandemonium starts all over again in "Resident Evil: Regeneration." The possibilities are endless, and I wouldn't put it pass Anderson and his crew to come out with a part seven. But for now, the filmmakers would like for moviegoers to imagine an end to the zombie mayhem when Alice, Claire and a new team of survivors make their last stand against Albert Wesker and Umbrella Corp. 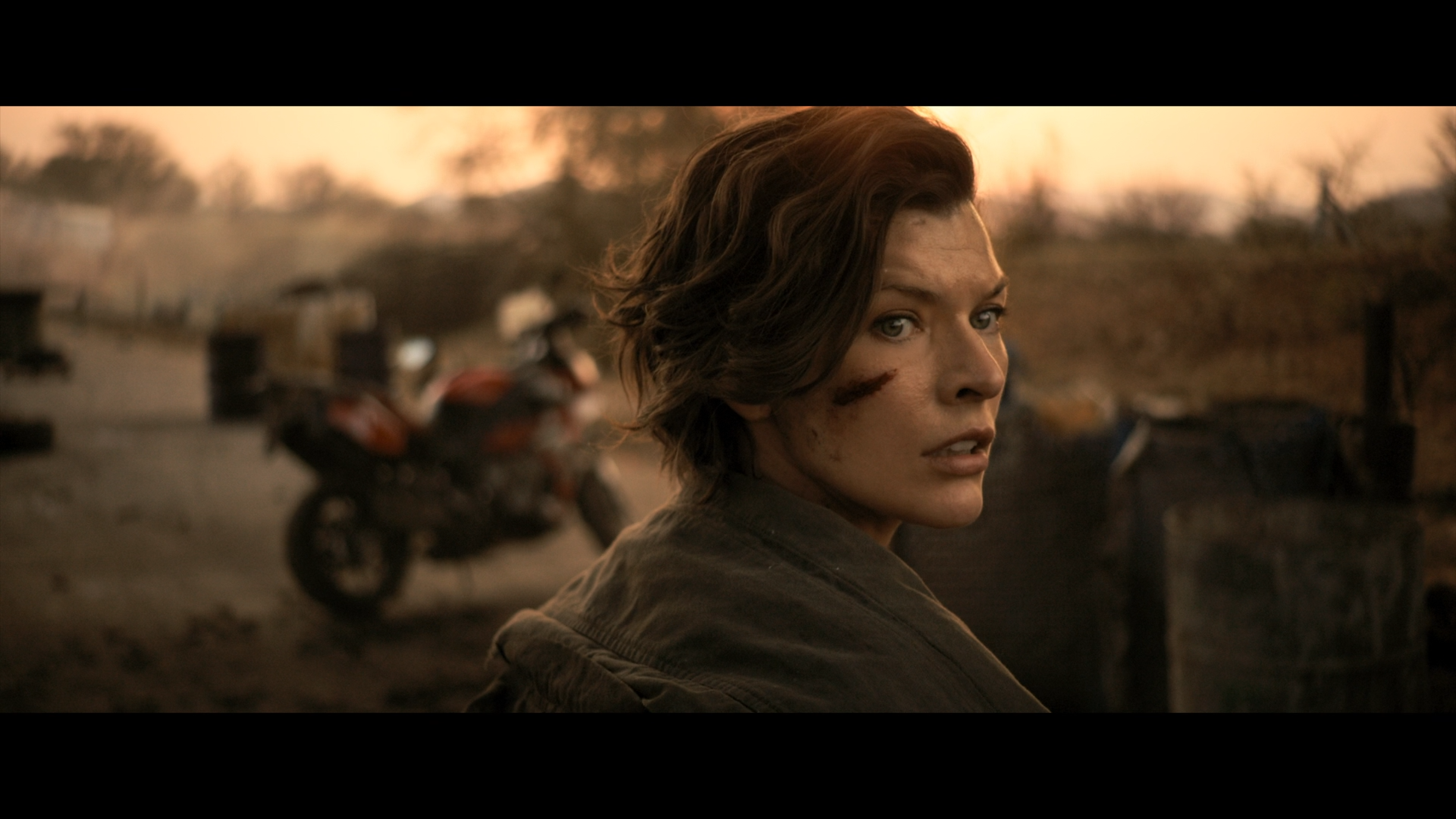 Picking up soon after the events of Retribution, Alice (Milla Jovovich reprising the only role that frankly justifies her acting career) is given an opportunity to actually fulfill the meaning of that word when the computer program Red Queen turns snitch and explains humanity's last hope can be found in Raccoon City where it all began. Basically, half of the story is a road movie littered with zombie peril while the second half is an Alamo trope with a Christ parable for a dash of taste. The perilous journey is made more perilous when Umbrella mastermind Dr. Alexander Isaacs (Iain Glen) returns from the dead! And if that's not enough shocking enough, wait until the filmmakers start throwing one twist after the next while sightseeing what's left of the city. Not only does Wesker refuse to die, but even Claire (Ali Larter) must be hiding some kind of reviving potion or hording all the health packs because everyone else around her seems to be dropping like zombies.

Apparently, for The Final Chapter, Anderson is under the impression that showering the last videogame-based horror actioner with double-crosses and sudden revelations is the way to keep audiences invested and interested. Yet, with each clichéd turn of the screw, more unanswered questions arise and quickly forgotten for the sake of reaching the main surprise, which includes the origins of the Red Queen and the T-virus. Sure, it's a clever twist to the series, but what does it matter when the action is a haphazard ball of confusion thanks to the headache-inducing, rapid-fire editing that turns the choreographed fights into a complete chore. The whole mess feels like Anderson's given up, running the whole show on autopilot with little care or enthusiasm behind the over-the-top nonsense, one of the main reason for even watching each installment. The only memorable action sequence worth noting is Alice fighting five Umbrella thugs while hanging on one foot. And with the amber gloominess of Glen MacPherson's (Trick 'r Treat) cinematography making it more difficult to see, humanity's last stand is ultimately firing duds at the zombified viewers. 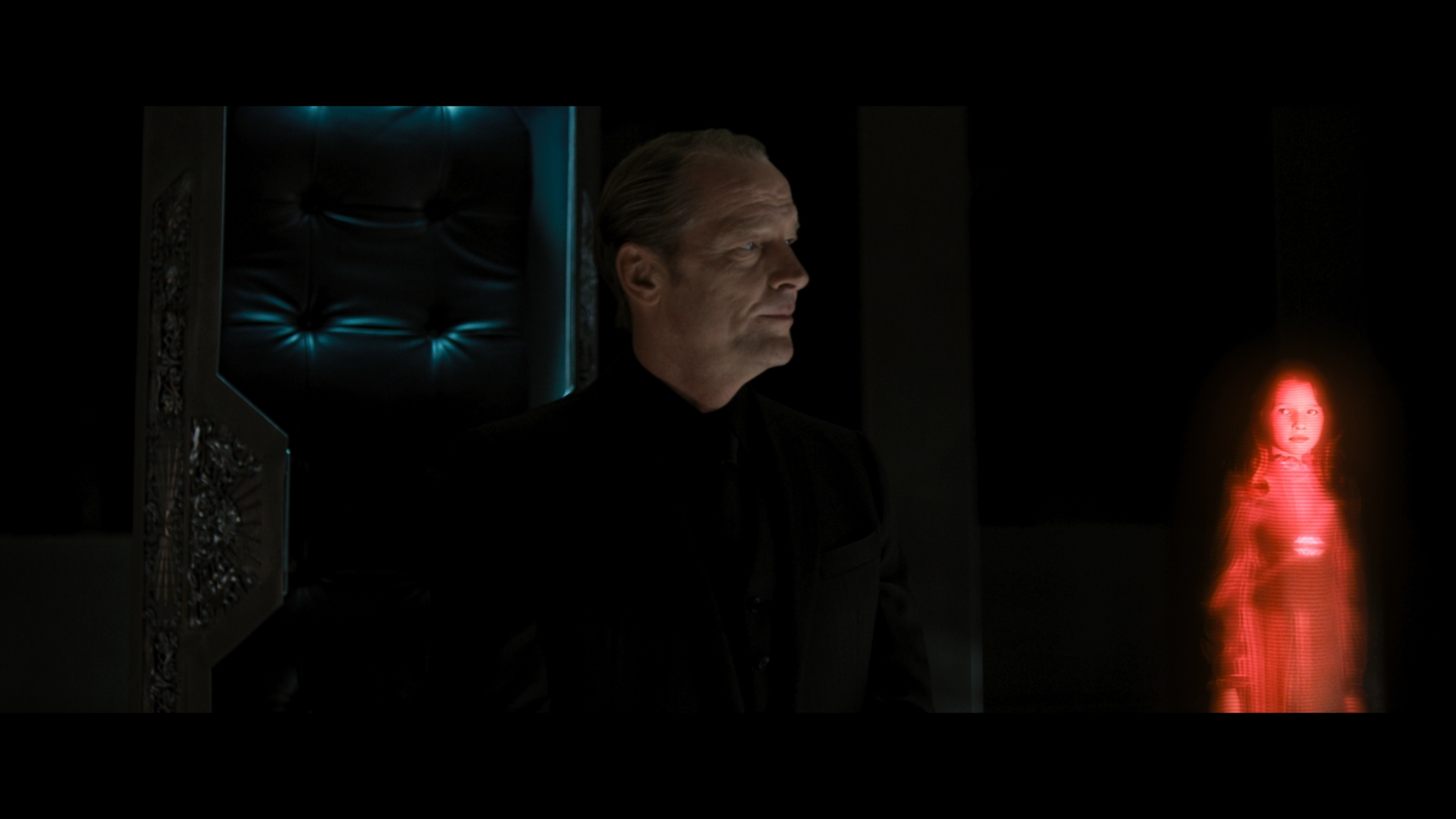 The sixth and final chapter in the zombie apocalypse series delivers the final death blow on Ultra HD with an excellent HEVC H.265 encode. Although not significantly sharper than its Blu-ray counterpart, the freshly-minted transfer, made from a 4K digital intermediate source, is nonetheless an uptick with better resolution and definition overall.

Despite a few soft, blurry moments, which may be the result of the deliberate photography, viewers can plainly make out the stitching in Alice's ragged clothing, individual hairs are razor sharp, and each piece of concrete rumble scattered on the street is distinctly detailed. Speaking of which, the stylized cinematography also affects the rest of the presentation where contrast intentionally falls on the lower end the grayscale. However, whites appear a tad brighter and specular highlights are nicely improved, revealing a bit more detail in various sources of light, gunfire and metal comes with a slightly more realistic shine. The palette is limited overall, leaning more towards amber-brown accents and earth-tone ranges, but primaries remain full-bodied and a bit more intense than its HD cousin. Best feature of the 4K presentation are the richer, darker black levels, providing better depth, but sadly, the finer details tend to be overwhelmed in the darkest, deepest shadows. Still, it's a great-looking Ultra HD video fans are sure to enjoy.

After 15 years, Alice finally finds redemption equipped with a fantastic Dolby Atmos soundtrack, which defaults to Dolby TrueHD 7.1 for those who haven't upgraded. The rears are consistently employed with the subtle atmospherics and a variety of activity. Action sequences, especially, break out in an uproar of gunfire, explosions and the hungry screams of zombies all around. Things improve with many of those same effects flawlessly panning into the overheads and the echoing resonance of each gunshot, creating an immersive dome-like soundfield that puts the listener right in the middle of chaos. The rest of the action is splendidly balanced across all three front channels where background activity fluidly moves from one side of the screen to the other with an engaging, spacious presence. While vocals are well-prioritized and distinct even during the loudest moments, where ambient effects and musical score bleed into the front heights, dynamic range is extensive with crisp, sharp detailing. The low-end provides a thunderous, wall-rattling weight to each gun battle and explosion, making this a great, near reference-quality lossless mix. 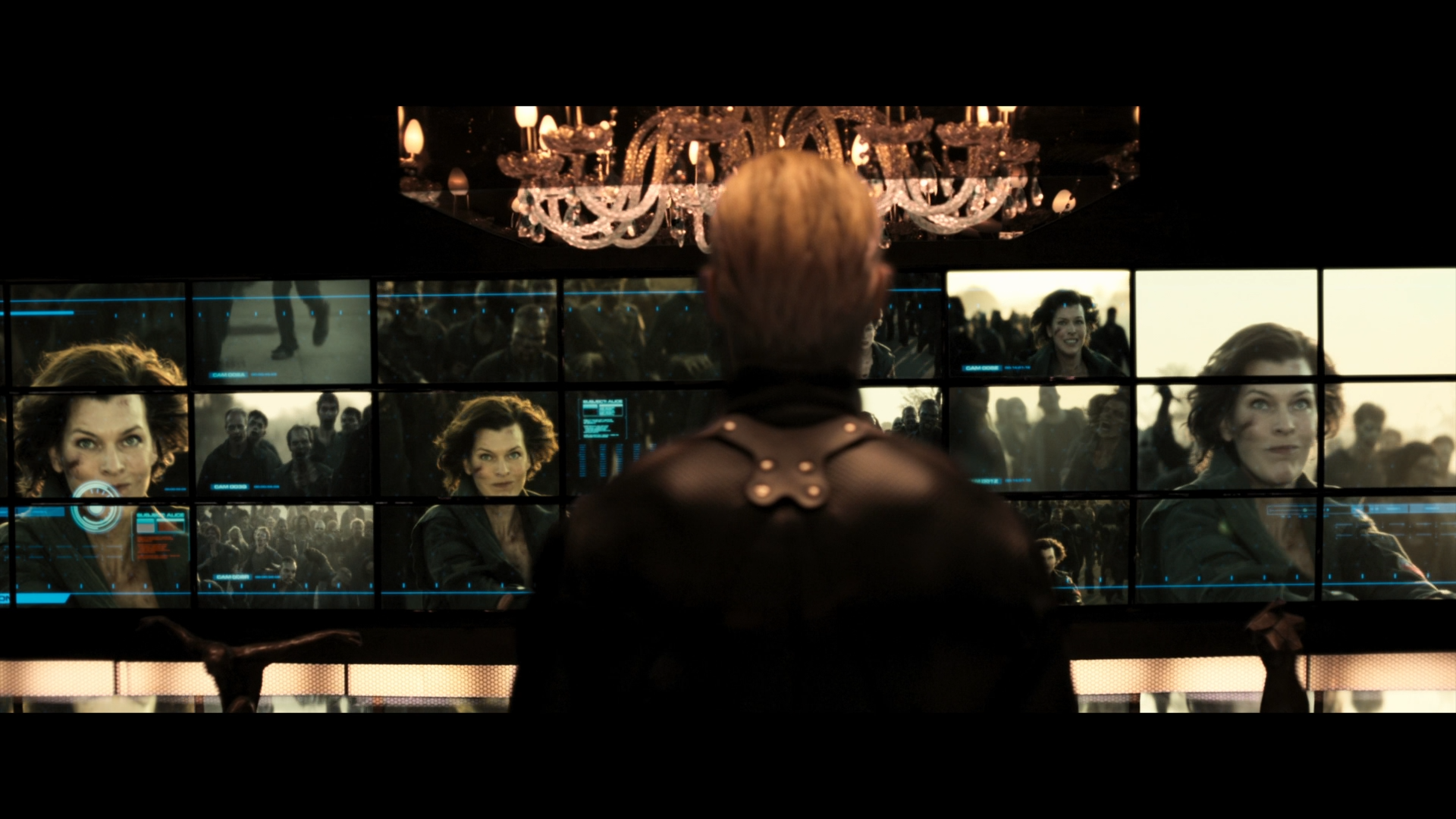 Sony Home Entertainment brings the sci-fi horror actioner to Ultra HD Blu-ray as a two-disc combo pack with an UltraViolet Digital Copy code and housed inside a slightly thicker than normal black, eco-vortex keepcase and a glossy slipcover. In addition to the 4K HDR10 disc, owners are also rewarded with a Blu-ray copy of the film with a DTS-HD MA 7.1 soundtrack and containing all supplemental material presented in HD.

Paving the way is a Picture-in-Picture commentary track with director Paul W.S. Anderson and Milla Jovovich entitled Retaliation Mode where the two share their thoughts on the movie and the franchise. Also included are snippets of BTS footage and sneak peeks at the action choreography. This is followed by a closer look at the Stunts and Weaponry (9 min) and a tour of the set serving as the scene of the final confrontation in Explore the Hive (4 min). Next is a seven-minute piece called The Bad Ass Trinity & the Women of Resident Evil spotlighting the female characters and how much they kick butt throughout the franchise. It all comes to a close in an extended trailer for Resident Evil: Vendetta. 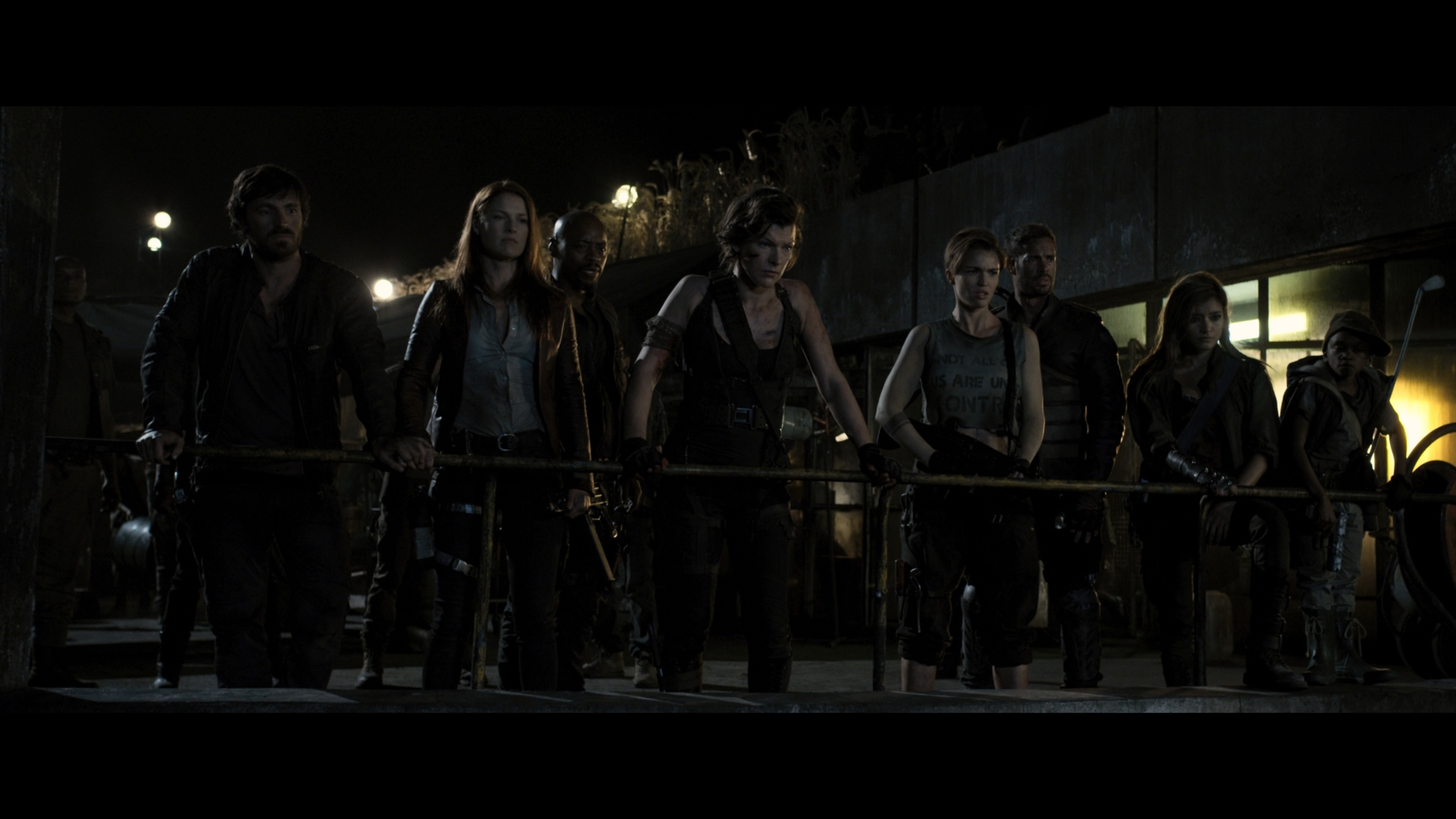 Granted, the Resident Evil franchise is the furthest from high art or anything close to good cinema, but each installment is fun and entertaining, embracing the ridiculous absurdity of the concept while enjoying the bad-assery of its heroine Alice. In The Final Chapter, director Paul W.S. Anderson attempts to do the same thing, but somehow manages to conclude the series on a sour, yawning-inducing and sadly disappointing dud. The Ultra HD Blu-ray, on the other hand, rides into the sunset with a fantastic 4K video presentation and a near-reference Dolby Atmos soundtrack. Supplements are the weakest link, but overall, devoted fans of the franchise and completists will more than likely be content with their purchase.