Paramount // Unrated // May 9, 2017
List Price: $74.63 [Buy now and save at Amazon]
Review by Stuart Galbraith IV | posted May 31, 2017 | E-mail the Author
Except for hazy memories of my parents watching Mannix when it was new, and, of course, Lalo Schifrin's jazzy theme music, the kind of classic TV opening that, once heard, is never forgotten. Strange then to watch the series for the first time only now, despite the high pedigree of talent involved. Mannix (1967-75) was the creation of Richard Levinson and William Link, just prior to their finding much greater and more lasting success with Columbo. It was the last hurrah of Desilu Productions before Lucille Ball sold the company lock, stock, and barrel to the adjacent Paramount Pictures (via Gulf + Western) and produced as it was on the heels of Desilu's final successes, Mission: Impossible and Star Trek. Mission's Bruce Geller developed the series and, initially, produced it in a less intense, more leisurely yet similar manner.

Mannix ran for an impressive eight seasons and 194 episodes, this despite the fact that it nervously fiddled with its format before settling into a mostly routine if entertaining private eye show. As with several other long-running series now controlled by CBS/Paramount, Mannix initially sold as season sets but has since been reissued (this is at least the second time) as a Complete Series boxed set. 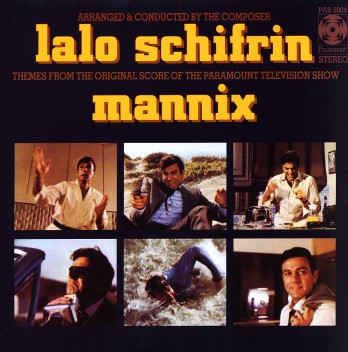 The first season, different from all that followed, was centered on Intertect, a detective agency relying on high-tech computers to aid investigators like Joe Mannix (Mike Connors). Mannix, however, is resolutely old school, in the Philip Marlowe mold, and largely ignores protocol and the orders of his superior, Lew Wickersham (Joseph Campanella), generally steering clear of Intertect's ant colony-type operation.

That version of Mannix was not particularly successful, and Lucille Ball reportedly had to pressure her longtime network, CBS, to keep the show on the air. So, from season two the entire Internact angle was dropped and Joe Mannix became a straightforward private eye, operating out of a small office-apartment in West Los Angeles. Like Mike Hammer's Velda, Peggy Fair (Gail Fisher) is Mannix's loyal assistant, a role reportedly first offered to Star Trek's Uhura, Nichelle Nichols. In any case Fisher was among the first African-American actors to receive opening credits billing, indeed the only other performer besides Mike Connors to do so.

The series also experimented in alternating Mannix's regular police contacts, the most visible being Ward Wood (as Lt. Art Malcolm) but also a pre-M*A*S*H Larry Linville (as Lt. George Kramer), and Robert Reed (as Lt. Adam Tobias). Reed did Mannix concurrent with his patriarch role on The Brady Bunch (another Paramount show), which must have kept him busy. Joe Mantell (Chinatown) played another private eye, disappeared for a while, and then returned, albeit played by another actor, Milton Selzer.

Born Krekor Ohanian, Mike Connors was of Armenian descent, a World War II veteran of the Army Air Forces, and a UCLA basketball star. Many of these same characteristics, with slight variations, were incorporated into the character of Armenian-American Joe Mannix (Korean War vet, college football star). Originally billed as "Touch" Connors, he drifted into movies and TV where he was busy if not especially upwardly mobile. He briefly played the lead in another CBS show, Tightrope! (1959-60) but Connors's career wasn't going anywhere when he landed the series that made him famous. (With the exception of William Shatner, Desilu's Star Trek and Mission: Impossible likewise took chances with experienced actors with little name recognition.)

What Mike Connors had in spades was Sam Spade, the classic private eye look. Handsome yet vaguely world-weary, Connors looks like everyone's image of a private investigator, with the physical prowess to make his fisticuffs believable. Connors also projected a relaxed, easy-going charm that's undeniably appealing. As an actor he's not at all bad, and seemed to recognize his limits while playing to his strengths.

What Mannix lost in dropping Campanella it gained back in equal measure with Gail Fisher. Like many a private eye Peggy Fair is mostly around to serve her boss coffee and story exposition, much like Lee Meriwether's charming but under-utilized secretary to Barnaby Jones, with both women joining after a felony murder left them widows. A true pioneer among African-American performers, Fisher was the first to star in a nationally televised commercial, and the first to win an Emmy Award for acting (in Mannix), but after the series ended show struggled with personal problems, including drug addiction, and died in 2000.

As a series, Mannix is only slightly above average. It's entertaining but routine, rising and falling based on the quality of each week's script and, to a lesser degree, its guest stars. Busy, journeymen writers and directors rather than Geller, Levinson and Link were tasked with cranking out episodes, the end result that some are quite good, some quite bad. Of the former, Season 2's "The Silent Cry" is not only good but innovative, featuring National Theatre of the Deaf founder Audree Norton as a deaf-mute witness to a murder plot. Season 3's "Eagles Sometimes Can't Fly" is also good, with a young black man in the frame for a murder actually committed by a rich, white thrill-seeker.

Conversely, Season 4's "A Ticket to the Eclipse," with Darren McGavin playing a veteran of Mannix's old unit in Korea, is quite awful. McGavin, normally delightful, is perfectly dreadful as a good ol' boy martial arts master-serial killer taunting Mannix with his gleeful killing spree. Wildly miscast, anyone familiar with McGavin's normal screen persona would be nonplussed watching him (or more accurately his stuntman) performing ersatz Bruce Lee-type backflips and karate chops.

As with most other library titles shot on 35mm film and released by CBS/Paramount, Mannix: The Complete Series looks great, with bright color, a sharp image and hardly any signs of damage or age-related wear. The "shelf-friendly" packaging is indeed that, but viewers are on their own searching for specific shows, with only show titles provided inside the two jumbo DVD cases holding all eight seasons, four to a case. The discs themselves appear identical to those on the season sets and probably were just that. The mono audio is excellent and the Region 1 discs are closed-captioned.

Supplements, as before, are limited to the first season episodes, but they include fairly recent interviews and commentary tracks and episode intros by Connors and Campanella, along with Connors's appearance on The Mike Douglas Show, promo films, and an excerpt of Connors's appearance as Joe Mannix on an episode of Diagnosis: Murder decades after Mannix went off the air.

Not quite Great American Television but enjoyable nonetheless, thanks in no small way to Mike Connors's agreeable PI, Mannix: The Complete Series is Recommended.