Spotlight On A Murderer

Arrow Features // Unrated // May 30, 2017
List Price: $21.63 [Buy now and save at Amazon]
Review by Stuart Galbraith IV | posted June 19, 2017 | E-mail the Author
Reviews of Georges Franju's Spotlight on a Murderer (Pleins feux sur l'assassin, 1961) often compare it to works of Agatha Christie. It resembles Ten Little Indians a bit, but mostly the impetus, rather than the stylistic concerns, seems to have been West Germany's hugely successful Edgar Wallace movies made by Rialto Films between 1959-1972. Those hugely entertaining films weren't exactly spoofs, but stylishly embraced an older style of murder mystery and adapted them in contemporary terms. The early Edgar Wallace films were slightly more serious and less stylized but by the early ‘60s they were gaining in popularity and were increasingly bold in their direction.

Franju's approach to similar material is as uniquely his and as specifically French as the Wallace movies were emphatically German in their attitudes. Spotlight on a Murderer, Franju's immediate follow-up to his classic Eyes without a Face (1959), made with much the same crew, operates from an ingenious, two-prong premise, and overflows with evocative camerawork, making the most of its great location, a beautifully preserved castle in Brittany.

It's not as good as Franju's poetic horror film Eyes without a Face or the marvelous, even incredible Judex (1963), Franju's tribute to silent-era French serials, mainly for Spotlight's glut of too many under-defined characters and its lack, for the most part, of a central protagonist the audience can latch onto. But it's still very clever, uniquely Franju in its direction, and a real treat for the senses. 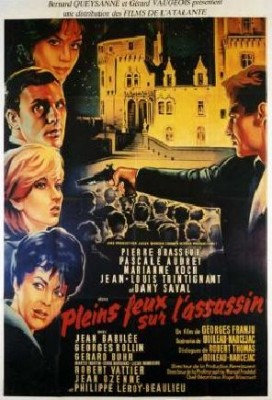 The basic story works from two very clever ideas this mystery-lover doesn't recall ever seeing before. The first: The Count Hervé de Kerloguen (Pierre Brasseur), terminally ill and no more than a day or two away from certain death, disappears into a hidden chamber within his vast centuries-old castle. Soon after, various cousins arrive for the reading of the will, but as the Count's body cannot be found, the disposition of the estate has halted. Either the body must be discovered within the castle, or everyone must wait a full five years to collect.

The second: Left with little choice but wait around, hoping the corpse will turn up, the mostly scheming relatives decide to cash in on the castle's famous legend, about a 13th century ancestor who discovered his wife was having an affair with a knight, killed her lover, and then drove his wife to commit suicide, jumping from the castle's high tower. Borrowing money for the elaborate equipment needed, they prepare a son et lumiere, an intricately staged sound and light show recreating the story for wealthy tourists, a macabre Disneyland-type extravaganza.

As crews arrive to wire and test equipment, it soon becomes apparent that not only is a murderer amongst them, but he's using the high-tech audience-monitoring and elaborate sound system to taunt the heirs, driving some to murder and suicide, while occasionally doing the deed himself (or herself).

Similar somewhat to the Rialto Edgar Wallace movies, where the plots are so Byzantine that the only way to enjoy them is to let them wash over you while one takes in the amusing performances and visual delights of the direction and camerawork, in Spotlight on a Murderer, things aren't exactly logical. At times it feels like important expository scenes may have been omitted. Strange deaths occur regularly yet there's nary a policeman detective in sight. Indeed, when one death is blamed on another heir, he's arrested off-camera. None of the characters seem too terribly concerned that they're being picked off one-by-one and, most curiously, none team up to search for the missing corpse.

The movie audience hears the legend all the way through so many times one can almost recite it verbatim by the fade out, but the son et lumiere is quite spectacular, the well-dressed VIPs attending the dress rehearsal marveling at it and craning their necks to follow the action of the spotlights and discrete sound effects. (One can't help but wonder if Franju hoped for a fully immersive discrete stereo theatrical release, entirely doable in 1961.)

The closest thing Spotlight on a Murderer has to a main character is Jean-Marie de Kerloguen (Jean-Louis Trintignant), who keeps his free-spirited girlfriend Micheline (Dany Saval) under wraps outside the main gates, if for no clear reason. We never learn much else about them, so little in fact that when Jean-Marie's occupation becomes important late in the story the audience is surprised, as it was never mentioned before. The other characters are even more sketchily defined, like flirtatious Edwige (Marianne Koch), who rides a white stallion day and night, leaving the horse dripping with sweat while she vents her sexual frustrations. Mostly, though, they're just genre stereotypes, secondary interests perhaps for Franju, who with cinematographer Marcel Fradetal concentrates on the visuals.

Many cheap and expensive movies have used real castles in other productions, but few as well as Franju. Where an artist like Mario Bava would have concentrated on lighting effects, Franju seems more interested in the textual qualities of the masonry and Baroque interiors. Like Robert Wise's near-concurrent The Haunting (1963), the setting itself becomes a character, almost superseding the human cast.

In super-crisp black-and-white and standard (1.37:1) screen shape*, Spotlight on a Murderer looks fantastic, in line with Gaumont's other high-def restorations. It features some of the inkiest blacks this reviewer has come across, and the 1.0 uncompressed French mono 1.0 PCM audio is unexpectedly robust. The disc is region "A" encoded and comes with a region 1 DVD.

The extensive supplements include an unusually thoughtful and thorough 40-page booklet of essays and interviews; a production featurette from 1960 shot during filming, with the cast and crew; a trailer and reversible sleeve art.

Not perfect but a real treat nonetheless, Spotlight on a Murderer is a DVD Talk Collector Series title.

* There's evidence on both sides that the picture was shot for and originally presented in theaters in 1.66:1 widescreen, but there seems to definitive confirmation of this.