I don't think in all of cinema there's been an official movie series before or since that, having started out so promisingly, descended to such rock-bottom putridity so quickly as these films. Some background is in order:

Their producer, former procurer and possible Soviet spy Harry Alan Towers, found a niche beginning in the early 1960s packaging international movie deals. These were usually based on pre-sold properties, often literary or pulp classics based on works by Jack London, Arthur Conan Doyle, Robert Louis Stevenson and others that were usually in the public domain, or which he could acquire film rights to very cheaply. He'd then rustle up financing typically from two or more European countries, often using at least one name actor from each one, and he'd write the scripts himself, under the pseudonym Peter Welbeck.

The Brides of Fu Manchu (1966), the first sequel, isn't nearly as good, but it's still not bad. Sharp, Lee, Marion-Crawford, and Chin all returned, though Douglas Wilmer replaced Nigel Green as Nayland Smith. Another co-production with West Germany, Heinz Drache headlined the continental cast.

The Vengeance of Fu Manchu (1967) was yet another step down, this time with a lesser director (Jeremy Summers) at the helm, and loopier financing, this one an Irish-West-German-Hong Kong-British co-production filmed mainly at Shaw Bros. Studios in Hong Kong. It's watchable, but only barely.

For the last two, The Blood of Fu Manchu and The Castle of Fu Manchu, Towers entrusted the directorial chores to Jesus "Jess" Franco, auteur de la merde, the unaccountably celebrated cult filmmaker of the vast share of the world's worst movies. Yet Franco's staunchest defenders readily admit that, even by their standards, Franco's Fu's stink. 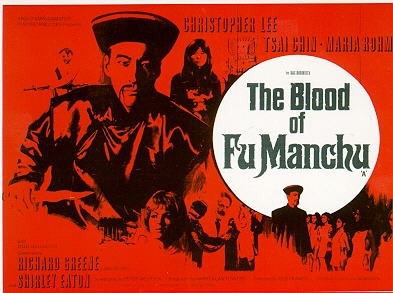 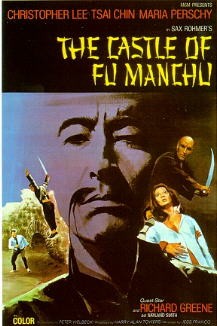 It's a toss-up as to which is worse. Most find Blood of Fu Manchu very slightly more tolerable, possibly because Franco fans find it a bit more emblematic of that director: endless pointless zooming in-and-out to nothing particular, crude handheld and out-of-focus shots, a disregard for continuity, a brothel-like seediness and threadbare quality unusual even for cheap movies of its budget level. Castle is made with even less "enthusiasm," but I find its combination of brazen cheapness and laughable incompetence very slightly more entertaining, though there's not a whole lot of that, either.

Blood was, rather incongruously, filmed in Brazil, with Fu Manchu cavorting with bandito-styled outlaws and hiding out in particularly Spartan conditions in the jungle. There he's discovered a fatal poison that kills only men. Fu rounds up the usual bevy of beauties (not so beautiful this time out) to become carriers of a kiss of death on Nayland Smith and other adversaries. For this and Castle, Richard Greene replaced Douglas Wilmer from the previous two, who of course had replaced Nigel Green from the first. However, Howard Marion-Crawford toughed it out through all five pictures, only to commit suicide a few months after completing Castle, his last film. He's full of enthusiasm but increasingly ruddy and pasty-faced as the series progressed.

"Guest Star" Shirley Eaton appears fleetingly as "The Black Widow," a character that seems to be from another movie. And that's because it is footage from another picture, The Girl from Rio, another interminable Towers-Franco collaboration. Apparently Eaton's appearance was neither disclosed in her Rio deal nor was she aware she was even in Blood until it came out.

The Castle of Fu Manchu, a West German-Italian-Spanish-British-Liechtensteinian (!) co-production largely shot in Barcelona and Istanbul (!!), including scenes supposedly set in the Scottish Highlands (!!!), is notable mainly for its audacious and lengthy pre-credits sequence. Fu Manchu, in his high-tech fortress, uses his latest weapon to create icebergs in the Caribbean. All of the Fu Manchu scenes are stock shots from The Brides of Fu Manchu and prominently feature actor Burt Kwouk, who goes uncredited. Except for a few crowd scenes, all of the ocean liner scenes and special effects of it striking the iceberg is lifted from A Night to Remember (1958), Roy Ward Baker's great film about the sinking of the Titanic. Since that movie was shot in black-and-white, all of those cutaways are tinted blue (after all, who'd otherwise notice?). The mismatching is dizzying and yet, incredible cheat though it is, it's actually better than anything that follows.

One of the more depressing qualities of the Franco films is the contrast of the carefully nurtured period atmosphere created by Don Sharp in the first two movies, and the slapdash disregard for period (and everything else) in the Francos. In Blood and Castle, modern automobiles and the like are plainly visible, and the non-Asians wear ‘60s wardrobe, yet some of the props and set decoration vaguely hint that these movies are still supposed to be period.

Genre scholars often point to the parallels between the Fu Manchu series with Lee and Universal's 1940s Mummy films with Lon Chaney. In both cases the actors were extremely hampered by uncomfortable makeup that allowed very little expressiveness. Lee, who whinged endlessly about Hammer repeatedly asking him back for more Dracula sequels, was strangely much less critical about appearing in the far worse last Fu Manchu movies. The difference, reading between the lines, is that Towers treated Lee and his family to First Class accommodations at the exotic, far-flung locations of the pictures. If nothing else, Towers knew how to sweet-talk name actors into his terrible productions.

Blue Underground's single-disc double feature Blu-ray of The Blood of Fu Manchu and The Castle of Fu Manchu is rather disappointing. The transfers (Blood is of the unrated European version with extra nudity) are just adequate; one suspects that may have used high-def masters made for the 2003 DVD releases, transfers not really up to 2017 standards. The DTS-HD 1.0 mono audio is likewise okay. The disc offers English subtitles and is region-free.

Excellent extras from the 2003 DVDs are repurposed here. A two-part featurette, touting interviews with Lee, Franco, Chin, Towers, and Eaton is among the best ever done for such bad movies and worth the price of the disc by itself. Also included are trailers, poster, and still galleries.

It's a pity that there's no U.S. Blu-ray of The Face of Fu Manchu, the first and by far the best film of the series. These are quite terrible yet have a certain appeal, the kind at least that Lin Tang would certainly approve. Rent It.