Cabin in the Woods 4K Ultra HD, The 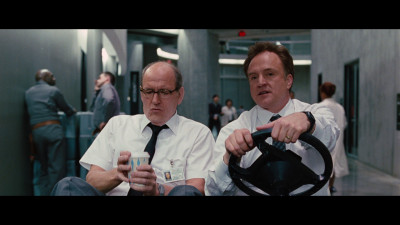 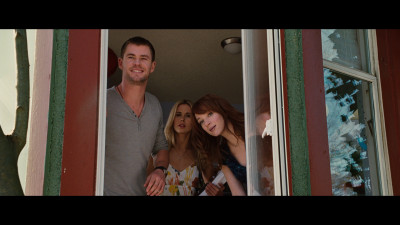 All images in this review are from the 1080p Blu-ray, and not representative of this 4K UHD Blu-ray release.

There's nothing like a good horror film, but the genre has grown increasingly stale since its heyday. There are some occasional surprises - The Conjuring and Sinister come to mind, not counting their sequels - but most of what's served up tends to disappoint. As a result, certain filmmakers grow bored and want to turn things upside down. Wes Craven's Scream is one such example; it pokes fun at the usual tropes by using them as a central plot point, twisting them just enough to keep things lively. Shaun of the Dead took a more comedic approach while lampooning clichés in the zombie subgenre. It was only a matter of time before someone tackled that whole ‘cabin in the woods' thing, and it didn't take long for those wheels to start turning. Drew Goddard and Josh Whedon - who previously worked together on Buffy the Vampire Slayer and Angel - wrote a screenplay in three days, hoping its satirical take on slashers and torture p**n would give horror a much needed kick in the pants. Principal photography began in May of 2009, but it didn't see the light of day until early 2012. The wait was worth it because their film - simply titled The Cabin in the Woods - wowed film goers and critics alike, and for good reason.

The plot revolves around a group of teens heading to the country for a weekend of fun. They're staying in an abandoned cabin, of course, and as expected, they're going to make dumb decisions, get loaded, and show a bit of skin. Things go awry when an old journal is found and one of the weekend warriors recites incantations from it. This summons a family of zombies, and one by one the teens are picked off.

I know what you're thinking. "Pass! I've seen it a million times before!" But what I've just described is only the beginning. What we're treated to instead is both an examination and celebration of the genre, and to say the rabbit hole Goddard and Whedon have dug goes deep would be something of an understatement.

Writing a review for this film in 2017 is difficult, because I feel like I'm trying to withhold a secret everyone already knows. I don't want to tell everyone that Darth Vader is Luke's father, you know? But at the same time, I want to have a meaningful conversation about what this film has to offer. I'm going to try and toe a line somewhere in the middle. But I warn you, this film is best experienced cold, so if you've been fortunate enough to avoid any and all spoilers, you may want to skip to the technical portions of this review. 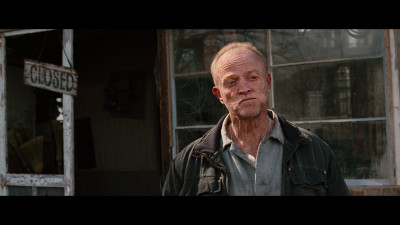 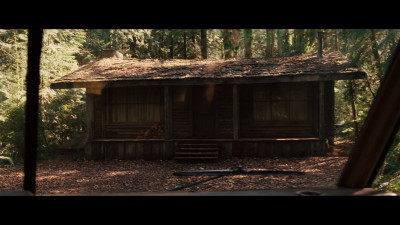 The Cabin in the Woods is entirely self-aware, meaning other than the tired premise, there's also the usual stereotypes on display, namely the virgin, whore, scholar, idiot, and jock. However, their adventures are intercut with bits from a high-tech work environment, and in the film's opening scene, we're given hints that the two guys working here are part of something ominous. As the runtime progresses, we learn that the teens are unwilling participants in a deadly rat maze. Each new twist along the way explains - in a fictional way, of course - why horror films tend to be so formulaic. The twists don't stop coming, either. Just when you think you've figured out what's going on, additional layers continue to reveal themselves.

I didn't find Cabin in the Woods to be all that scary. There are some genuine frights, but the overall tone is that of fun, especially if you know the genre inside and out. But as time goes on, I find the stuff it's attempting to convey more troubling than amusing.

But first, the guys in the high-tech facility can represent the filmmakers as well as the audience. As the teens are being massacred, they're cracking jokes, taking bets, you name it. Point is, they're completely amused, not to mention desensitized… just like us. But they're also the ones controlling this little charade, and they have higher ups to appease. So, they have to put on the most entertaining show possible, lest they anger their superiors and lose their jobs. So the film gets crazier and crazier, because they're commenting on what critics and filmgoers alike expect these days: more! Goddard and Whedon clearly had fun with this aspect of the film. I can almost picture them sneering with their best Jack Nicholson impression, "Wait ‘til they get a load of this!" This is all well and good, but… 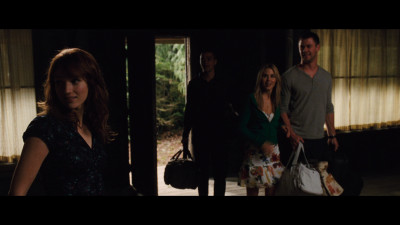 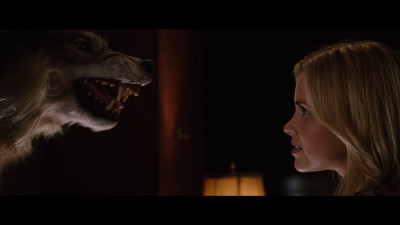 Deeper still, another angle is that the teens represent us as a society, while the corporate guys represent the major entities which enact evil deeds upon the unsuspecting public. The cabin itself, by extension, is the world we live in, heavily controlled and monitored by the powers that be. The only problem with this message, if it's what the filmmakers truly had in mind, is that it doesn't contrast with that fun vibe very well. Telling people that they only have so much free will from within the confines of corporate and possibly political control is a harsh, sobering thought, and filmgoers probably just want to have a good time. For some, this kind of messaging can detract from the viewing experience.

Of course, I could be over thinking things. Honestly, I don't think the messaging in this film is too heavy handed, so don't worry. It still has gobs of gore, monsters, supernatural entities, and all the inside references a horror fan could dream of. As satirical horror and a deconstruction of the genre, The Cabin in the Woods is one of the best films horror fans have been treated to in a long time. Its execution is practically flawless. Everything from casting, to direction, editing, acting, and special effects are great. There's even a surprise cameo that genre fans will flip over. If you haven't seen this film in the 5 years it's been making the rounds, do yourself a favor and sit down to enjoy it as soon as possible. 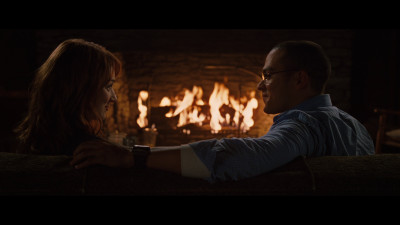 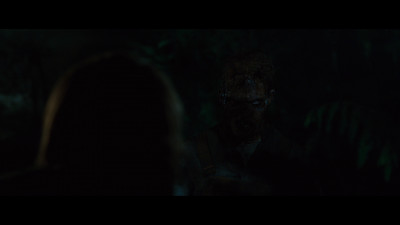 The Cabin in the Woods debuts on 4K UHD Blu-ray via the HEVC codec at an aspect ratio of 2.40:1, and while it's an upgrade over the Blu-ray, it isn't the best example of what UHD has to offer.

This movie had a 2K DI, which right away makes people assume the worst. But 2K DI's benefit a great deal from having more disc space, a more efficient encoder, and even more detail brought out through HDR. Some of the best releases on the format to date have come from 2K DI's. This year's John Wick 2 is a stunning example of that, as is Fox's catalog release of Prometheus. The Cabin in the Woods, though, doesn't benefit as much as I had hoped.

There's an increase in clarity and detail, but not consistently. When it's noticeable, it's usually subtle. Some close-ups reveal nice clothing textures and fine hair details. A number of others fail to impress, and don't seem like much of an upgrade over the standard Blu-ray. It's all sort of a mixed bag, and this could partially be because of the way this film was shot.

‘Mixed bag' describes a lot of aspects of the visual presentation, actually. Black levels, for example, are all over the place. They appear deep and inky at times, but range from murky to milky at others. Skin tones appear natural at times, but appear red or even orange more often than not. The contrast doesn't pop very often either, even with the inclusion of HDR. There are definitely moments where highlights look nice, but most of film, again, doesn't seem much better than the Blu-ray. Of course, darkness is inherent to the film's horror aesthetic, so most of the visuals aren't exactly meant to shine. Still doesn't explain why the skin tones lean so heavily towards red, though.

My comments probably make this sound like a tragic release, but it isn't. I think this may be reasonably accurate to the source and it's definitely an improvement over its 1080p counterpart… it's just to what degree that bothers me. I'm the kind of person who will take a visual upgrade regardless of how small it is. I'm a bit of a video snob so I take what I can get, even if making the purchase sends the wrong message to the studio. But for most people out there, this release is hard to recommend. I doubt they'll find enough difference to feel happy about upgrading, especially when there's far worthier catalog titles that have already been released.

I don't have an Atmos speaker setup, as I've instead opted for straight 7.1. That caveat aside, the 7.1 Dolby TrueHD track is, in a word, marvelous. Dialogue is prioritized and crystal clear, as it should be, and the soundstage is an environmental symphony of chaos. It's enveloping from beginning to end, whether minor sound cues are creeping through to place the setting, or when things get crazy and sounds sweep and zoom across all angles. The dynamic range really helps to deliver the more powerful moments, too. What really surprised me was how active the LFE was. For a satirical take on horror, I wasn't expecting this film to kick the bass as heavy or as often as it did. Simply put, this is a top notch experience and should be one of the many highlights of watching this film!

Much to my surprise, this disc actually has extras on it! That may seem like a small feature, but most 4K UHD Blu-rays to date have left extras off, instead relying on the included standard Blu-ray to deliver… but not here. The only thing that's missing from the 4K disc is the Picture-in-Picture feature, ‘It's Not What You Think'. If that bums you out, no worries, as the original Blu-ray is included. The features are as follows:


-Audio Commentary with Writer / Director Drew Goddard and Writer / Producer Joss Whedon
-We Are Not Who We Are: Making The Cabin in the Woods
-The Secret Secret Stash
-An Army of Nightmares: Makeup and Animatronic Effects
-Primal Terror: Visual Effects
-Wonder-Con Q&A
-Theatrical Trailer 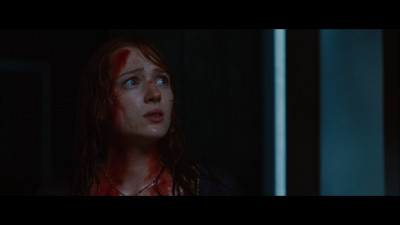 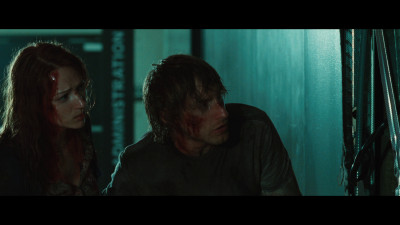 Upon its theatrical release, The Cabin in the Woods was one of the films that seemed destined to collapse under the weight of its own hype. But it was praised by both critics and filmgoers alike, earning a reputation for being the smartest meta take on the genre since Wes Craven's Scream, and I concur. There's always a lot of horror films being released, but it's rare for any to grab this kind of attention these days. If you haven't seen The Cabin in the Woods, it's a must. What format should you watch it on? That's the real question. The 4K presentation is a step above the Blu-ray, at least in some respects… but not by much. If you want to save a bit of money, you can't go wrong with the Blu-ray, especially since it has more accurate skin tones. Still, minimal upgrade aside, this is a terrific movie with a killer lossless audio track. Recommended.