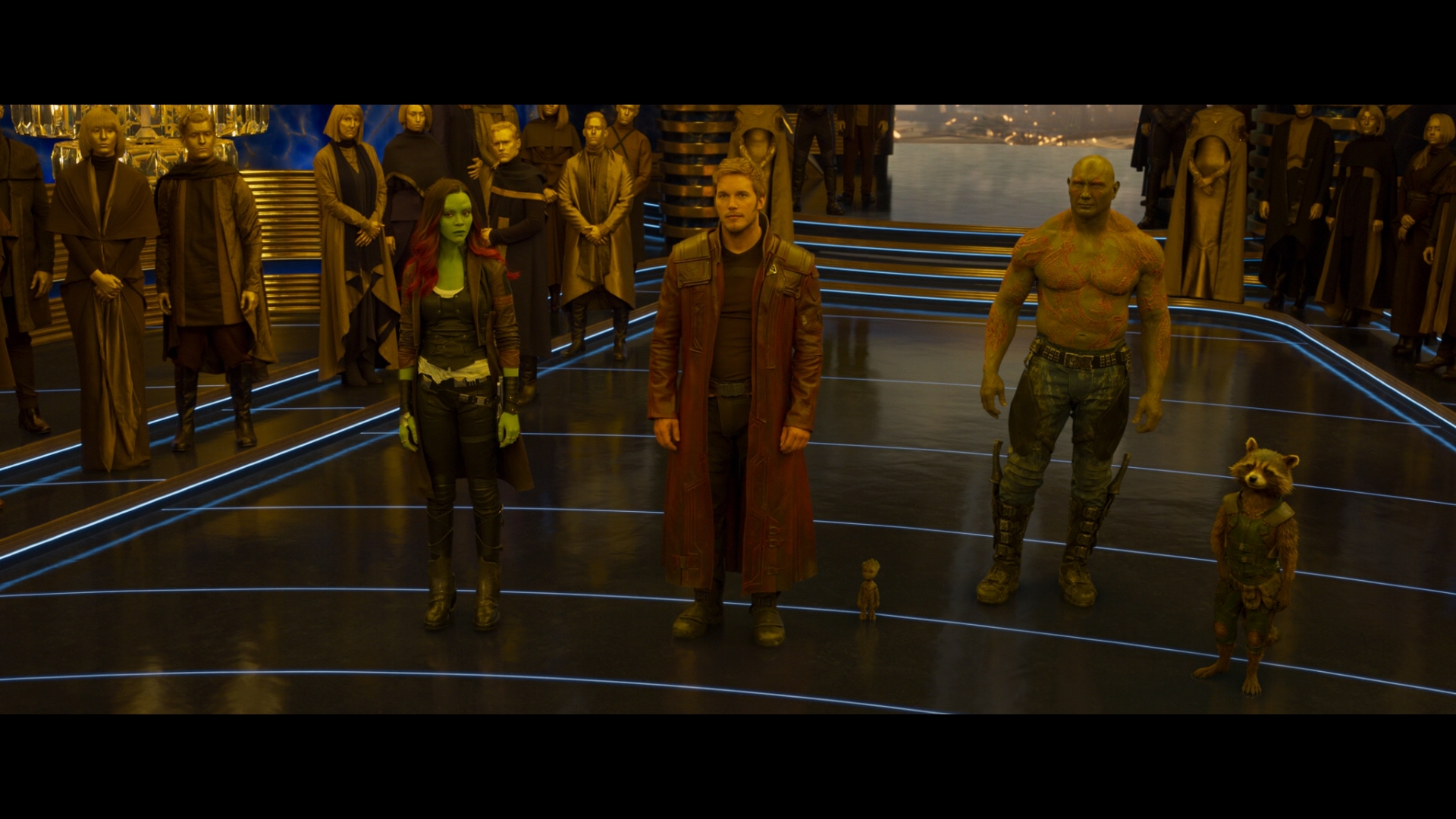 The original Guardians of the Galaxy was one of the most pleasant surprises of the summer of 2014. It was a movie based on one of the lesser-known comic book teams in the Marvel Universe who turned into perhaps the most lovable big-screen characters of the various Marvel movies to date. The highly anticipated sequel is bigger in almost every way, not the least of which is the amount of money Disney has sunk into the budget. Why then does is seem so much smaller?

The second volume begins with our heroes - Peter Quill (Chris Pratt), Gamora (Zoe Saldana), Drax (Dave Bautista), Rocket Raccoon (voiced by Bradley Cooper), and Baby Groot (voiced by Vin Diesel) - as hired guns for a race of gold-skinned aliens, taking care of a huge monster in order to protect some type of intergalactic batteries. In exchange for defeating the monster, Gamora's sister, Nebula (Karen Gillan), is turned over to their custody. However, things go awry when Rocket steals some of the precious batteries, causing the gold alien race to send attack ships after them. Quill and his pals are saved, though, when a ship appears and destroys the attackers. The pilot of the ship introduces himself as Ego (Kurt Russell), and claims to be Peter's father.

Ego turns out to be more than just a powerful alien entity - he's actually a god, whose powers enable him to control an entire planet...in fact, he is the entire planet, but let's not dive too deep into the science of it all - just roll with it. Not long after our characters have arrived on Ego's god-planet, Rocket is captured by their old adversary Yondu (Michael Rooker), but a mutiny among his fellow Ravagers causes both raccoon and whatever race the blue-skinned Yondu is to wind up behind bars together. This is actually the best part of the movie, as Rocket and Yondu eventually come to realize that they're not all that different - at least personality-wise.

As for Ego, his "master plan" is to use the god-like powers that are inside his son, Peter, along with his own powers to drain additional power for them both from all the different worlds (including Earth) that Ego has visited in the past...or something like that...destroying the world in the process. Honestly, Ego's plan makes zero sense to me. Even less sense is why Peter would entertain the idea of helping him for one second - other than it's necessary to the plot. I'm sure fans of the comics understand a whole lot more what's going on here, but Writer/Director James Gunn doesn't do a very good job of translating it to the big screen, assuming he's following an earlier comic book plot at all.

Any joy from Vol. 2 comes from small moments in the movie, rather than the overall storyline. There's a fun part where Yondu needs Baby Groot's help to retrieve an item for him and Groot keeps bringing back the wrong thing...over and over and over again. There's also a pretty moving conclusion to the movie where Peter realizes his parentage may have been closer than he imagined all these years (I won't say more than that). However, these nice moments are surrounded by tons of mindless action sequences (and many of these sections just seem like a huge waste of money, as they don't add a whole lot to the story) and other "comedic" sections that don't work all that well - for example, the character of Drax, who was a lot of fun in the original movie, just comes off as a mindless muscled moron in this sequel. His character has regressed instead of progressed between films.

Because it's such a mixed bag, I didn't enjoy the second Guardians of the Galaxy movie nearly as much as the first one. There are fun moments to be had, for sure, but there's not much progression for any of these characters except for one: Michael Rooker's Yondu. He's the real star of the movie, and almost every moment he's in is worth checking out. As for the rest? It's mostly forgettable.

Guardians of the Galaxy Vol. 2 arrives on 4K in an Ultra HD/Blu-ray/Digital HD combo pack that includes a fold-out mini-poster (measuring approximately 15 1/2 x 9 3/4 and featuring David Hasselhoff). The 4K disc and 50GB Blu-ray come housed inside a black eco-Lite Vortex keepcase along with a sealed insert containing a code for a digital copy of the film (plus some exclusive bonus content). There are no front-loaded trailers on the 4K disc, although it does give viewers the option of jumping straight to the movie or going to the main menu, which consists of a short montage of movie footage with menu selections horizontally across the bottom of the screen. The Blu-ray disc, on the other hand, is front-loaded with a trailer for Thor: Ragnarok. The Blu-ray menu matches the look of the 4K one.

The Blu-ray is in this release is region-free, and the Ultra HD disc (as is the case with all such releases) has no region coding.

Guardians of the Galaxy Vol. 2 was shot digitally on RED Weapon Dragon Vista Vision 8K and Phantom 4K cameras. The movie is presented in the 2.40:1 aspect ratio. There seems to be some debate out there over whether this 4K transfer is an up-convert from a 2K digital intermediate (as reported on IMDB.com) or a 4K digital intermediate. In an interview with Director James Gunn by British journalist Lizo Mzimba (which can be found on Mzimba's Twitter feed), Gunn seems to indicate that parts of the intermediate are in 4K and parts in 2K, which seems to confirm (assuming Gunn knows his technology, which he should) that a 4K intermediate exists that contains up-converted segments. Then again, Gunn also states in that interview that the 4K release should be provided with Dolby Vision in addition to HDR, and indeed, that was the word from the folks at Disney in the days leading up to this release. Sadly, at least for those with Dolby Vision-capable players and TVs, that didn't happen here, and HDR is the only option. Regardless of the above, I find it hard to believe that anyone is going to be disappointed with the image here. It's spectacular, reference-quality stuff.

As is almost always the case, the HDR (High Dynamic Range) provided on the 4K disc gives this already colorful movie a boost in both the depth and contrast of the movie's palette that really wows. Reds are deeper, yellows are brighter, and virtually every frame is filled with wonderful eye candy to behold. Black levels are inky deep and noticeably better than the Blu-ray counterpart. And while details aren't a huge jump over the already-impressive Blu-ray image, the 4K disc manages to offer just a bit more of that too, particularly in some of the darker moments in the movie.

If there's any downside to the 4K image, it's that sometimes the visual effects don't look quite as seamless as they might on a less-detailed image. Baby Groot, who is completely CGI, often seems more animated than he does a living, breathing creature, and some of the other F/X come off that way as well. The makeup on the various actors is a little more obvious too. But that's really only a statement about what a great job has been done with this 4K transfer. This is one of the best-looking Ultra HD discs I own.

The featured audio here is an English 7.1.4 Dolby Atmos track that should blow audiophiles out of the water and really shows off one's home theater capabilities when it comes to sound. Guardians of the Galaxy Vol. 2 is about as busy with its audio mix as it is with its visual presentation. Spaceships swoop left and right, laser blasts ricochet from front to back, and explosions rock one's home theater with some great LFE rumblings.

My favorite part of the audio presentation, however, was during a scene where Yondu takes out a platoon of bad guys with his whistle-controlled Yaka Arrow. The arrow zips left, right, back and forth, up and down - all while the soundtrack blasts Jay and the Americans' "Come a Little Bit Closer". It's a blast to listen to (not to mention watch).

The dynamic range and channel separation here is excellent, dialogue is distinct and crisp, and I detected no glitches or problems with the mix - everything here sounds great and it's really nice to get a release where both the audio and the video quality are top-notch. 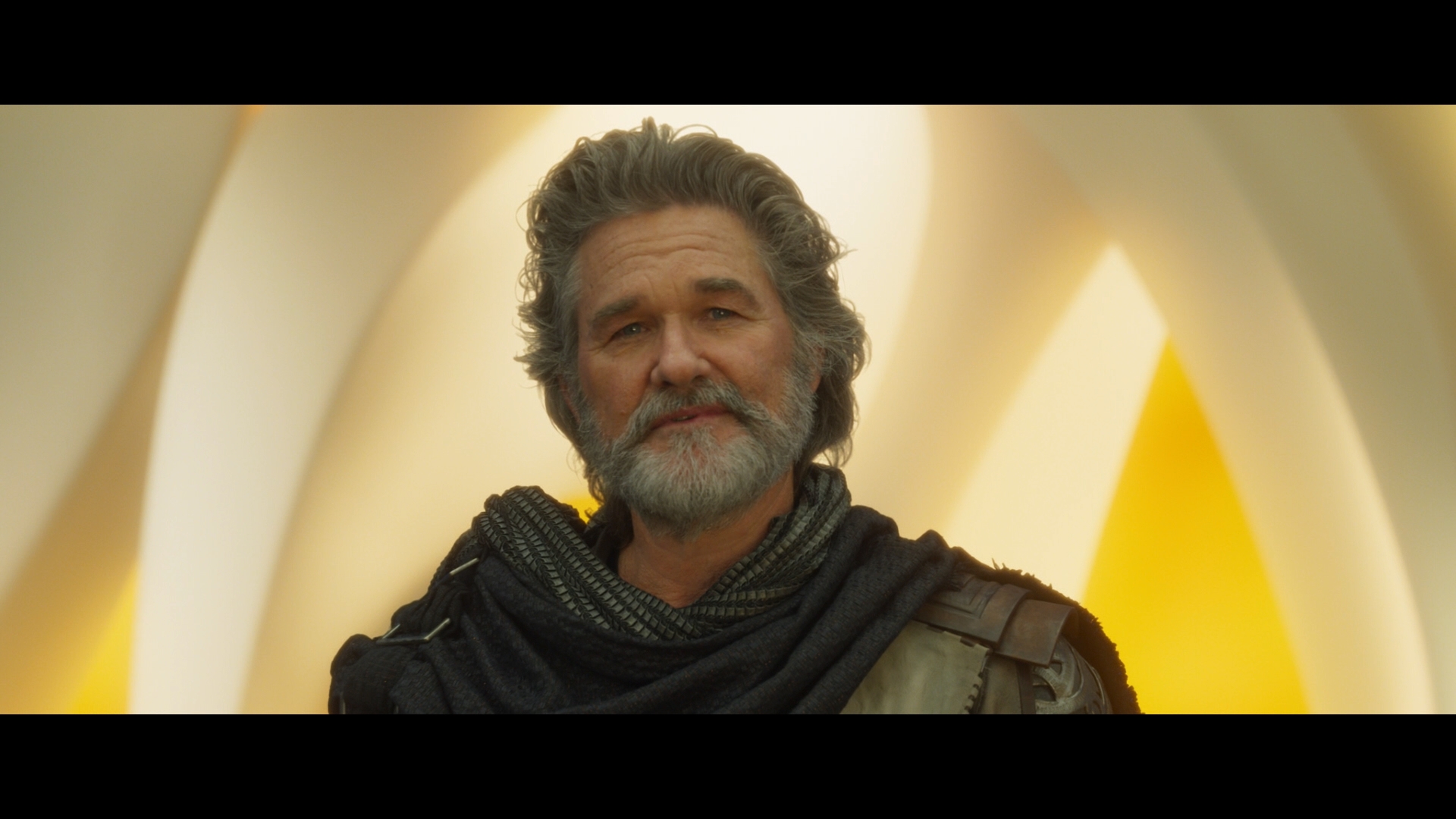 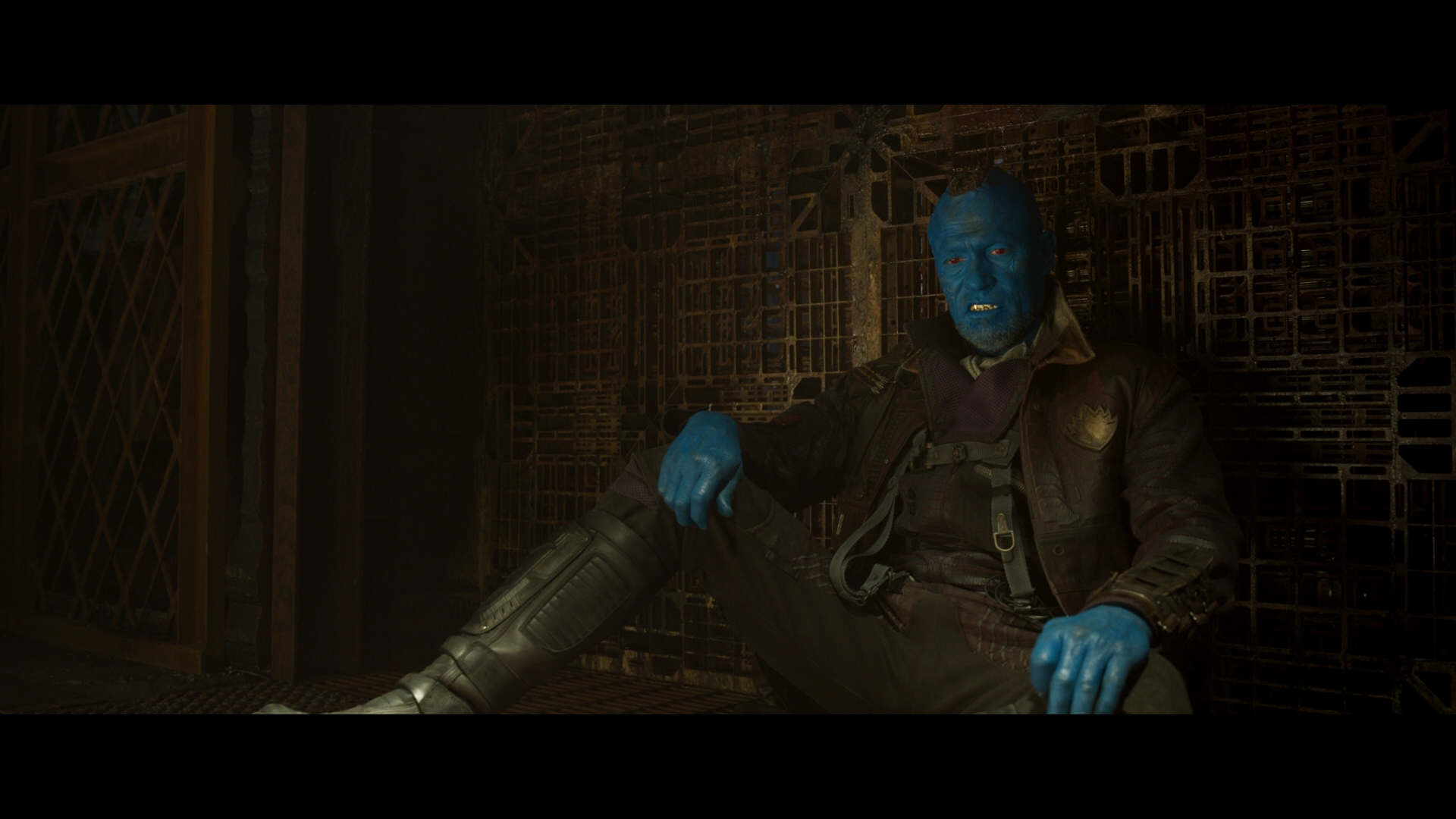 Although the sequel isn't nearly as much fun as the original, and much of the movie feels like the visual effects department going crazy in a storyline that hasn't quite been fully worked out, the reference-quality aspects of Disney's first Ultra HD release make this a title worth adding to one's collection. Recommended.