A rather obscure exploitation film shot in 1981, Victims! makes it way to Blu-Ray via Slasher // Video (those two "//"'s are part of the label's name), but in possibly the worst technical presentation I've ever seen of a movie on the format. Since the original film elements are long gone, it seems the best available master was an analog tape source. A disclaimer is printed on the back cover: "Victims! is presented using the best available elements provided by Slasher // Video. Not sourced from an HD master; remastered from Beta SP and upconverted to Blu-Ray and DVD specifications." They likely meant to say BetaCAM SP, which was a semi-professional format not compatible with consumer Beta VCRs, but this disc still doesn't look much better than that. I'll talk more about the picture quality below, but first about the movie itself: 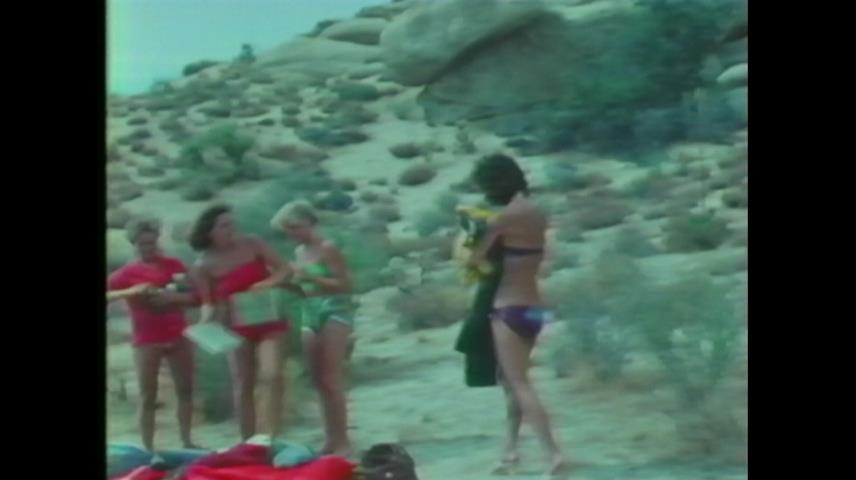 Two "serials killers" (that's what it also says on the back cover, played by Robert Axelrod and Lonny Withers) are on the loose, raping and killing innocent young women. Meanwhile a group of four girls- Susan, Janet, Lisa and Debbie- decide to spend a weekend camping out in a California desert. Stopping at a gas station along the way, they're harassed by the two psychos who are cruising the area in a dune buggy. Arriving at their destination which is pretty much in the middle of nowhere, they can't help but have the feeling they're being watched- that doesn't stop them from finding a small body of water and going skinny dipping however. Their real troubles begin once they return to their campsite though- they find their stuff rifled through, and when they get in the car to leave they discover it's been tampered with and won't start. The bad guys then appear and proceed to make this one trip they'll end up regretting- but our heroines just might be able to fight back.

This is a very low-budget film, with truly awful acting and dialogue- though the muffled sound quality at least tries to hide that a bit. While it tries to be exploitive, the events that unfold just aren't shocking enough (and the acting isn't the least bit convincing) to have any sort of impact, and the story isn't even thrilling or scary either. I've heard a few comparisons of this to I Spit On Your Grave, but as poorly made as that movie was it looks like Citizen Kane compared to this- and it's definitely got a number of memorable moments for those who have seen it. Given the abysmal quality of the master used for this disc one would think there had to be something unique about this movie that made it worth preserving, but I'll be darned if I could find what that was. Actor Robert Axelrod in his first screen appearance here did go on to a few more well-known movie and TV roles, most notably that of Lord Zedd in the "Mighty Morphin Power Rangers" series, so I guess that's something. The only elements that made this worth watching for me were the clothing styles and scenery of the time it was shot, as well as the very cheesy synth score and a quasi-pop song that plays a couple times, perhaps enhanced by the poor sound quality of the master in this case. 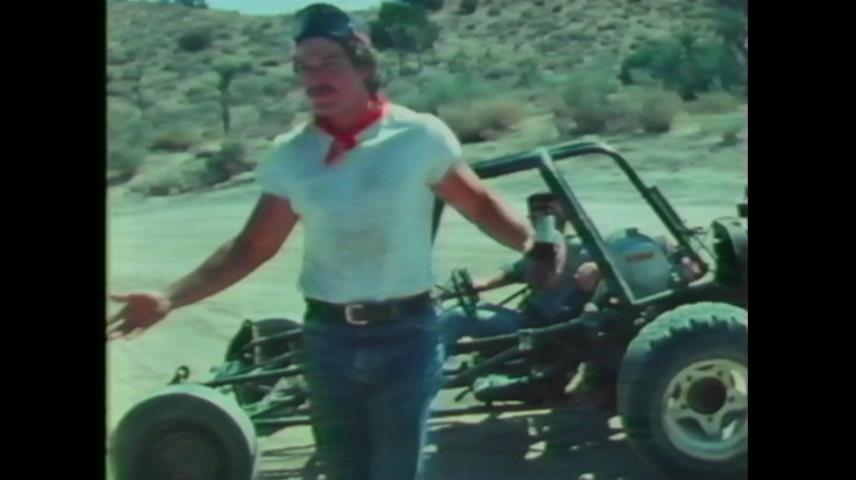 Given how many recent movies and TV series have been issued by major studios only on standard DVD, it's simply amazing that this of all things gets released on Blu-Ray. Originally shot on 16mm film (which could have looked very good in a true HD transfer), the film elements have been supposedly lost to time after being transferred for a VHS release by Simitar Entertainment in the mid-80s (a label I don't remember much from that time, but they did go on to be one of the first "budget" labels in the first years of DVD, and also the first DVD label to go out of business.) What we get here is a poor-quality 4x3 standard-def analog master upscaled to 1080i resolution. That might be a novelty to some, but as a collector of old media myself I routinely watch VHS tapes and other analog formats upscaled to HD through my A/V receiver- my current one even upscales to 4K. The picture doesn't come out looking like a 4K disc of course, it still looks like analog but the TV still thinks it's getting a 4K signal. The Eagle Vision label has also released a number of older concerts shot on standard-def video on Blu-Ray, which at least look better than this title does. The overall quality here looks a slight step above a VHS tape, as the picture is quite fuzzy but at least I noticed no dropouts and just a couple hints of tape damage. Color looks artificially boosted in a few places, and the film-to-tape transfer itself is rather washed out.

I will share with you my favorite shot from the film- just look at that antenna: 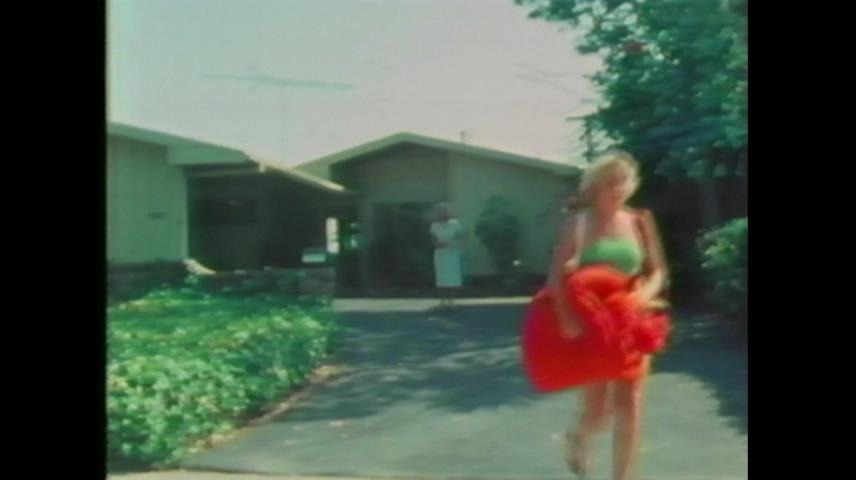 This may be the worst-sounding movie to appear on Blu-Ray as well, and the fault here lies more with the production than any re-mastering that could have been done. Most of the dialogue sounds like it was recorded on location, poorly at that, much of it difficult to hear and sometimes drowned out by noises from off-camera. The whole thing is a very lo-fi affair, with the music (one of the only memorable things about this movie) sounding like a dirty magnetic tape head. The Blu-Ray encodes this in 2-channel DTS Master Audio and the mono track stays properly centered. Simitar's VHS cover, seen in the extras, proclaims "Hi-Fi Stereo" on the front- many of their DVD releases were erroneously labeled as stereo also. Olive Films did go to the trouble of including hearing-impaired subtitles, which deciphers some of the dialogue although there's a few parts where the subtitler gave up and simply indicated "Inaudible", they also describe the music which made me laugh a few times. 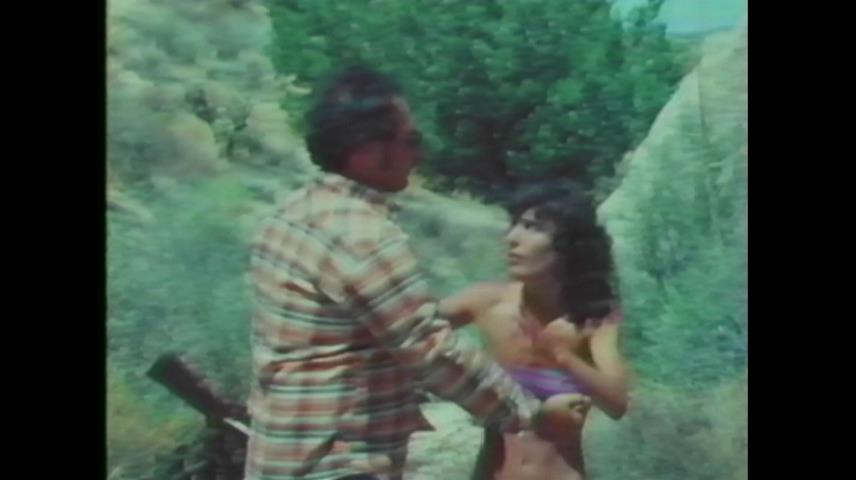 Those who make it through Victims! to the end will likely be hoping for some sort of justification on why it was ever made, and we sort of get that. Jesus Teran, the head of Slasher // Video who apparently likes this movie, met up with director Jeff Hathcock in a hotel room and recorded a commentary track as well as a 20-minute video interview. The commentary track is mostly improvised, with Hathcock saying at some points that he doesn't remember shooting a particular scene while others he remembers "just like yesterday." He acknowledges that this was a low-budget production and didn't really aspire to make anything great; he had worked at Knott's Berry Farm in California and wanted to make a film with some of the park's stunt performers just for fun. He held separate auditions for the four main female roles and remarks that he wasn't very happy with their performances during shooting and says that he could have gotten a "better looking" cast if he'd had more money. The most interesting anecdote is of when the cast and crew had to leave the camp location after a band of "hippies" who seemed to be in a "devil cult" appeared and told them to "get the f- out of here!" Having already shot the essential parts, they obliged.

The commentary ends a few minutes before the movie does, as Hathcock says he has to leave, but the on-screen interview was then shot afterwards where he goes over some of the same points and remarks that putting the "!" in the title added a sense of urgency, and also talks a bit about the painting done for the VHS cover which is also on this disc's front cover and label. There's also a trailer for this disc release done by Slasher // Video, and a somewhat laughable "photo gallery" which plays as a slide show set to most of the music lifted from the movie's lo-fi audio track- a lot of the pictures are simply stills from the movie itself which are a bit of a waste of time, as well as several shots of Simitar's videotape covers. The fake video store stickers on the disc's cover including "Please Rewind" are an amusing touch. 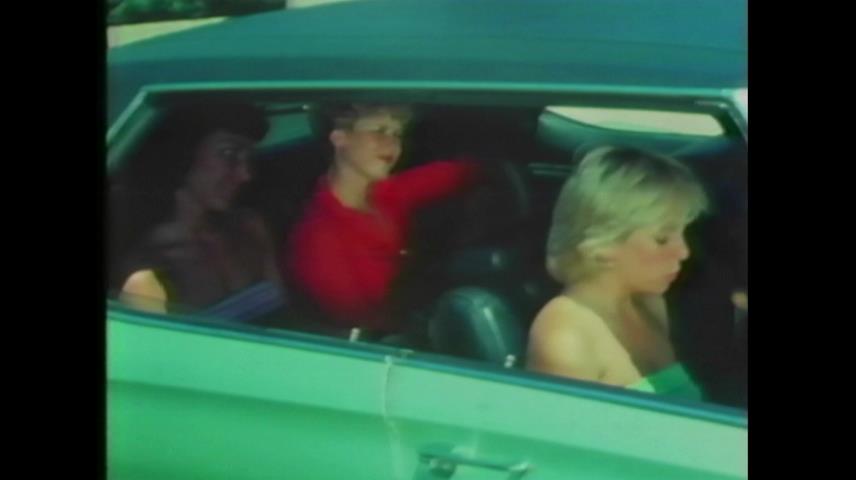 As bad as this movie is, it does seem to have a few fans out there and hopefully they'll be happy to have this on Blu-Ray disc regardless of its quality. Those who enjoy cheap, bad movies will probably get a laugh or two out of this as well, but there's really nothing truly remarkable about it that would make it worthwhile for anyone else to check out. I think the fact that this title made it to Blu-Ray despite being from a low-quality analog master puts to rest the claims of any "hardship" or "expense" of putting current titles out on the format though. If this can make it to Blu-Ray then nearly ANYTHING can, and there's certainly no reason for a movie like Strange Magic to be issued only on DVD.