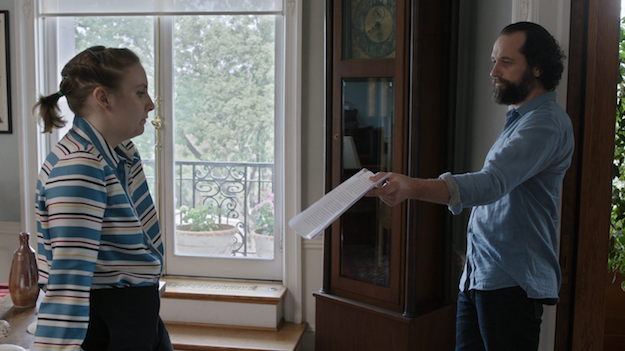 After six seasons of twentysomething self-involvement, HBO's button-pushing hit Girls has called it quits. (DVD Talk has reviews of every season for your perusal [I took over starting with season 3].) The sixth season, new to Blu-ray, offers an appropriate and satisfying close to a series known for antagonizing its audience as often as it entertained them.

As in the past few seasons, this last batch of episodes starts off with a seeming digression. Hannah (creator and star Lena Dunham) makes a professional splash with a confessional article, about her best friend Jessa (Jemima Kirke) and her ex Adam (Adam Driver) getting together, that gets published in the New York Times. She starts getting freelance work, and her first big assignment sends her off to a surf camp for bored housewives. The episode hangs on the premise that grumpy, spoiled urbanite Hannah gives into the chilled-out worldview of her beach bum surf instructor, Paul-Louis (Riz Ahmed). It plays somewhat like a retread of the mother-daughter yoga retreat episode from the previous season, and doesn't feel like a promising harbinger of what's in store. However, once the whole season unfolds, this low-key opener reveals itself to be a clever insinuation of themes to come.

Where last season was uncertain about what to do with Hannah, and found much more promising storylines in all the characters surrounding her, this concluding season brings her back to the fore. Possible spoiler ahead, but not really, since it has been fairly well-publicized that the Girls creative team (which also includes writer-producers Jenni Konner and Judd Apatow) decided the best way to cap off Hannah's fitful coming-of-age journey was to have her get pregnant and decide to keep the baby. The responsibility of caring for another life presumably makes one put away childish things, although the show remains true to its characters by demonstrating Hannah's capacity to truly grow up coupled with her stubbornness to do so. As ever, she requires prodding from those around her, like newly divorced best friend Marnie (Allison Williams) or Hannah's newly alone mom, Loreen (Becky Ann Baker).

Most of the other characters are given less intensive arcs for the season, as potential love triangles abound. Marnie tries to put some distance between herself and Ray (Alex Karpovsky), while flirting with the notion of getting back together with her toxic ex-husband, Desi (Ebon Moss-Bachrach). Ray meanwhile spends much of his time away from Marnie with ex-girlfriend Shosh (Zosia Mamet), fretting over whether he is locked into a dead-end existence. All is not totally well with Adam and Jessa either, as Adam feels compelled to make a film about his relationship with Hannah to help him work through his remaining feelings for her.

The show seems to understand only some of these soapy entanglements are compelling, and smartly focuses on the emotions which drive the characters to constantly be second-guessing their current situation. A late-season episode, "What Will We Do This Time About Adam?," offers Hannah and Adam a chance to see if they can be a couple again, with Adam making plans to fill the vacant father role in the life of Hannah's baby (the surf instructor is, unsurprisingly, out of the picture). Jessa meanwhile copes by flirting with breaking her sobriety and seeking the solace of anonymous sex. For better or worse, all three of these characters have grown out of these old ways of behaving. This realization is handled elegantly, without explanatory dialogue, making one of the most powerful moments of the entire series.

Some of this season's other highlights include the artistic revitalization of Hannah's roommate Elijah (Andrew Rannells), who rebounds (wait for it) from his confidence-shattering break-up last season by auditioning for a musical version of White Men Can't Jump. (Get it now, rebounds?) The Americans' Matthew Rhys shines in a largely two-handed episode, "American Bitch," where Hannah is invited to the apartment of a novelist hero of hers who has been called out as a sexual predator. She wrote a disappointed thinkpiece on him; he wants to tell his side of the story. It's a timely episode, and a smart one, that indulges only somewhat in Oleanna-style mind games. We never quite know if Rhys's character is totally on the level, even after the episode is done. It's a tribute to the quiet complexity of the actor's work, as well as writer Dunham and director Richard Shepard's unwillingness to let the episode devolve into a straw-man match between old school patriarchy and modern-day identity politics.

In its final season, Girls doesn't offer much in the way of definitive closure, which feels true to the spirit of the show. With each passing year, the characters have gotten a little bit wiser and a little bit better adjusted to the world. But only a little bit. There's still plenty of growing and living to do, so one could easily see Dunham and Co. pulling a Curb Your Enthusiasm and offering up a belated seventh season without missing a beat. I won't hold my breath, but I certainly won't groan if given the chance to check in with these characters again. 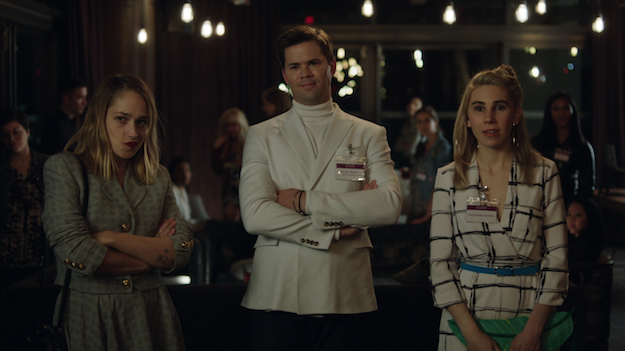 The Blu-ray
Girls: The Final Season is presented on two Blu-rays. A code for digital HD through Ultraviolet or iTunes is included.

The Video & Audio:
The A/V quality is as good as on previous seasons. The AVC-encoded 1080p 1.78:1 video presentation is clean, clear, and crisp, with strong color and contrast. Dialogue dominates the English DTS-HD MA 5.1 surround audio mix, but it's also (you guessed it) clean, clear, and crisp. A smattering of atmospheric effects and powerful music cues remind you that your surround speakers are there. Same two dub options as before: French DTS 5.1 surround and Spanish DTS 2.0 stereo. And subtitles-wise, you still get English SDH, French, Spanish, Danish, Finnish, Norwegian, and Swedish.

- Dang it, I like commentaries. Season 5 had no commentaries, and this time we only get one. But at least it's a typically jovial, anecdote-packed chat to wrap up the whole darn series. 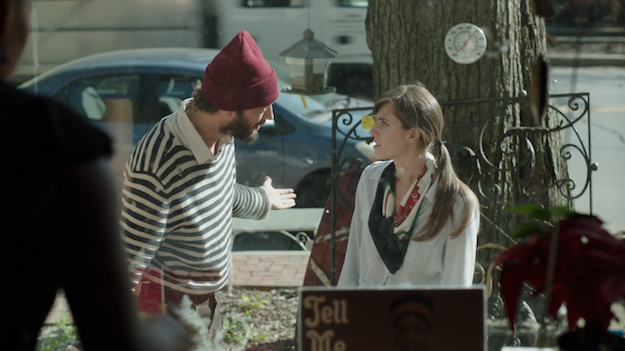