Time Life // Unrated
List Price: $47.99 [Buy now and save at Amazon]
Review by Stuart Galbraith IV | posted September 13, 2017 | E-mail the Author
We have no idea why Time-Life chose to send us a screener of The Tonight Show Starring Johnny Carson: The Vault Series (6 DVD Set Collector's Edition). It appears to be a very slight repackaging of a set they released three years ago, but this reviewer is nonetheless more than happy to sing its praises.

After Carson left the program in 1992, excerpts have turned up on places like YouTube, and there have been DVD clip show releases. This, however, is altogether different, a boxed set of 12 complete shows (along with some bonus clips) running more than 17 hours.

Although Tonight Show episodes have turned up on "cable television" in recent years, those programs are, so I hear, heavily edited, mainly due to music licensing issues. However, the 12 shows collected here not only include all the musical guests and their complete performances, but also everything else, including film clips from stars promoting their movies, network television commercials and sponsor spots featuring announcer Ed McMahon and musical director Doc Severinsen. (Including spots for Johnny Carson-brand leisure suits!) 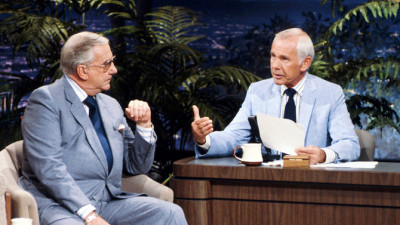 The selection of episodes has been wisely chosen. Disc 1 opens with a 10th Anniversary show from October 1972, featuring a dizzying array of talent (see below), It's followed by two more fascinating shows from that fall. Disc 2 offers two shows filmed on or near Carson's birthday ten years apart, in 1974 and '84 (when Carson was 49 and 59). Disc 3 offers three shows all from December 1975.

Discs 4 and 5 contain one complete week of Tonight Show episodes, from March 2-5, plus bonus clips from later in that month. Disc 6 offers and 11th Anniversary show, plus one more from later that fall.

The 10th Anniversary show gets things off to an excellent start. After stuffy plaudits from then California Governor Ronald Reagan, Johnny spends time with his idol, comedian Jack Benny, who's followed by Joey Bishop, George Burns, Jerry Lewis, Don Rickles, Dinah Shore, and Dan Rowan & Dick Martin. (The insert incorrectly lists one scheduled guest, Dean Martin. Lewis, still on the outs with his ex-partner, stepped him to replace him at the last-minute.)

The episode is quite funny but even more fascinating as a document of the era. Burns, for instance, was still a few years away from becoming everyone's favorite ancient Vaudevillian in movies like The Sunshine Boys and Oh, God!, and his onstage persona is less predictable and more acerbic at this point. When Jerry Lewis shows up, everyone else barely tolerates his mild pretentiousness: he references postproduction on his notorious The Day the Clown Cried, and becomes offended when audience members chuckle when he discusses a personal appearance in France. When others get laughs Jerry forces amused reactions to their material.

The ad-libbing is frequently hilarious. Noting the preponderance of Jewish comedians there, one cracks a joke that doesn't go over, and Rickles (or is it Bishop?) cracks, "Better warm up the car!" When Rowan & Martin show up near the end, they launch into a long, carefully rehearsed routine that's funny but at odds with all the adlibbing that had preceded them, prompting Carson to crack, "It's a shame you two didn't prepare any material for tonight."

The shows are equally interesting as a time capsule look into the era in which they aired. In Carson's monologue, for instance, he refers to the Watergate break-in, which had occurred less than four months earlier, and nearly two years prior to Nixon's resignation. Some of the references in the jokes reminded this reviewer of outré pop culture phenomena long forgotten, and some of the references had over the decades become so obscure they prompted me to look them up on the ‘Net.

Some guests make ironic appearances, unknown at the time. Bob Hope appears in one show to promote his latest movie, Cancel My Reservation (1972), which turned out to be his last, despite Carson's fleeting cameo appearance in it. Bonus material on that disc includes a demonstration by African-American stuntwoman Peaches Jones, a strikingly attractive woman who often doubled Pam Grier. She's charming and obviously talented but when I looked her up on the Internet I discovered she died of an apparent drug overdose just a few years after this show was taped.

Frequent ‘70s era guests like Buddy Hackett, Dom DeLuise, and David Brenner provide some big laughs before Carson seemed to decide that they had outlasted their welcome. Many such guests were on regularly then - poof! - in Johnny's eyes they had lost what appeal they once had an never came back.

The disc includes many big stars, including Sean Connery and Michael Caine (promoting the great The Man Who Would Be King), Dean Martin, Lucille Ball, Charlton Heston, Muhammad Ali, Burt Reynolds, James Brown and more, but it's just as fun to watch Johnny interact with "civilians" not in the Show Business, or even guests that prove dull and/or awkward, if only for Carson's wit and self-deprecating grace under pressure.

The 12 shows, most running about 75 minutes with commercials (only the local spots and station identifications are left out) are collected two to a disc, leaving plenty of room for lengthy bonus material on each disc. Shot on (1-inch?) videotape, the shows generally look great for their age, as do the commercials, some with long-forgotten jingles and/or featuring future stars early in their careers. The mostly mono audio (I believe one 1987 bonus clip is in stereo) is excellent though subtitle options are not included.

Enormous, enormous fun for those who fondly recall the series at its peak, The Tonight Show Starring Johnny Carson: The Vault Series Collector's Edition is a DVD Talk Collector Series title.