Olive Films // Unrated // August 29, 2017
List Price: $27.38 [Buy now and save at Amazon]
Review by Stuart Galbraith IV | posted September 18, 2017 | E-mail the Author
"They call him Flipper, Flipper, faster than lightning,
No-one you see, is smarter than he,
And we know Flipper, lives in a world full of wonder,
Flying there-under, under the sea!"

Flipper, the 1964-67 family television series about a "aquatic Lassie"-type title character, a bottlenose dolphin kept as a pet by a family at the (fictitious) Coral Key Park and Marine Preserve in Florida, is fondly remembered by those who saw it when it was new. Other than a few snippets here and there through the years I never saw it until Olive Films unexpectedly opted to license it from MGM and release its first two of three seasons to, surprisingly, Blu-ray.

Flipper was produced by Ivan Tors, a Hungarian Jack-of-all-trades who first produced comparatively science-based science fiction films and a TV series (Science Fiction Theater) before shifting his interests to animal-based family films and TV shows; and co-created by Ricou Browning, the underwater stuntman who got his start playing The Creature from the Black Lagoon and who later became the go-to guy to supervise underwater action scenes, most prominently for the James Bond megahit Thunderball (1965).

It's easy to see why MGM's TV division would back a series like Flipper. MGM had made Lassie a movie star in seven feature films between 1943-51, but then foolishly sold away all rights to the character for a mere $40,000 to Lassie's trainer, Rudd Weatherwax. The Lassie TV show, made without MGM's involvement, debuted in 1954 and ran 19 seasons, through 1973.

Tors, Browning, and co-writer Jack Cowden first conceived Flipper as a feature film, released in 1963. Starring Chuck Connors and Luke Halpin, the movie was a quite success for a non-Disney family film, earning rentals (i.e., profits) of $2.5 million. Flipper's New Adventure (1964) immediately followed, again starring Halpin but with Brian Kelly replacing Connors. It, too, did reasonably well, turning a $1.6 million profit and effectively set up the TV series that shrewdly debuted less than three months after New Adventure's premiere. 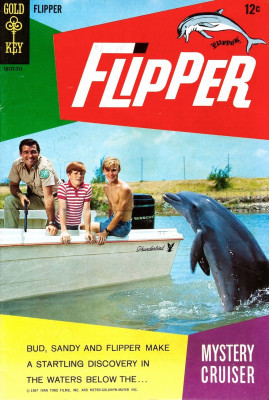 As with Lassie, stories revolve around Flipper's (played by five different dolphins, all but one female) great intelligence and bravery in coming to the rescue of Sandy and Bud, and helping Porter's efforts to rescue injured or stranded humans and sea creatures.

Flipper is a good pick for Blu-ray release. It was lushly filmed from the start in color, and in 35mm, and shot on location in Miami, Key Biscayne and, occasionally, Nassau. It's a bright, colorful series and, under Browning's guidance, the underwater scenes are very well done by TV standards.

But like an awful lot of ‘60s television, Flipper's unusualness and production values are countered by an extremely limited premises, one more so even than Lassie. Flipper is cute but his characterization necessarily limited. He chatters incessantly (the manipulated warblers of a kookaburra, rather than a real dolphin, were used) and gestures merrily, but that's about it. As with Lassie, the show is limited to a tiny handful of basic plots, which Flipper begins recycling about three shows in. The pacing is sluggish even by ‘60s TV standards, the underwater scenes slowing everything down even further, pretty though they may be.

But there's no denying the show's appeal to family audiences of the day. For children of the 1960s, the Ricks Family were living a dream life in paradise. The actors, along with the guest stars, seem to have been chosen as much for their swimming abilities as their skills as thespians. Nonetheless, the two kids are appealing and Brian Kelly cuts an especially handsome figure as their understanding Dad. Kelly is a decent enough actor, coupled with handsome features, so much so that if not for a series as innocuous as Flipper it's easy to have imagined Kelly becoming a huge film star. And, of course, there's that iconic theme song, introduced in the first movie.

A few surprising faces turn up as guest stars: Jessica Walter appears in the pilot, while other youngish talent such as Michael Conrad, a pre-Get Smart! Barbara Feldon, and James Best. (After the show proved a hit, slightly bigger names began appearing.) Certainly the strangest guest star of Season One was none other The Monster of Piedras Blancas, the titular star of the 1959 cult sci-fi film. "Flipper's Monster" is one sure to please genre fans, loosely suggested by Ricou Browning's experiences shooting Creature from the Black Lagoon.

Olive Films packs all 30 first season episodes of Flipper into a standard Blu-ray case, ten episodes per disc. The shows look great, with all the color photography and locations coming off really well. The DTS-HD Master Audio mono is also strong, and English subtitles are offered on this Region "A" disc.

Olive has erred, however, in opting to provide no written episode guide of any kind, either as an insert or part of the packaging, so viewers are on their own trying to locate a specific episode. No Extras.

My soon-to-be 10-year-old daughter enjoyed the episodes of Flipper we sampled together, though Dad was a little bored by the sluggish pacing and repetitive storylines, though it sure looked pretty. Light entertainment for the family, Flipper is modestly Recommended.