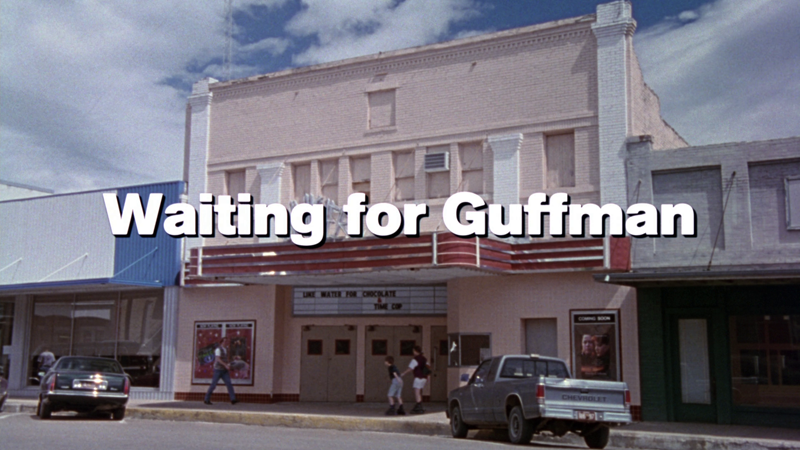 
The Movie
Christopher Guest had long ago established a spot in mockumentary history as a star of This is Spinal Tap, the 1984 masterpiece which followed a struggling, fictional British rock band's misadventures in America. So it was no surprise to see him return to the genre 12 years later, this time behind the camera as well, with a very different peek at the lives of some very different people. Waiting for Guffman would be the start of a four-film run of mockumentaries that masterfully built worlds full of oddball characters we could laugh at, but cheer for. (We'll ignore Mascots, Guest's unfortunate recent return to the well that doesn't quite work as well.)

Focusing on Blaine, Missouri, a little town with a proud populace, the film chronicles the events of the town's sesquicentennial (that's 150 years) celebration, which includes a big stage show, Red, White and Blaine, directed by local drama teacher Corky St. Clair (Guest). Now, back when the film came out, it was easy enough to laugh at Corky, an eccentric, flamboyant, effeminate theater stereotype, whose talk of a wife is obviously a cover for an orientation unlikely to be accepted in this little Southern town, but times have changed, and someone who considers themselves even mildly enlightened ought to consider why you laugh at Corky. Though there's certainly an element of Corky being a gay joke, through his voice and the insinuations (his interactions with a handsome young man and Brian Doyle Murray's concerned observation certainly lands in this zone), there's also the fact that Corky is simply an oddball, and his over-the-top behaviors needn't be reflective of his sexuality at all. Would some of Corky's best lines be less funny without the voice Guest puts on? Most likely. But, boy, they are good. 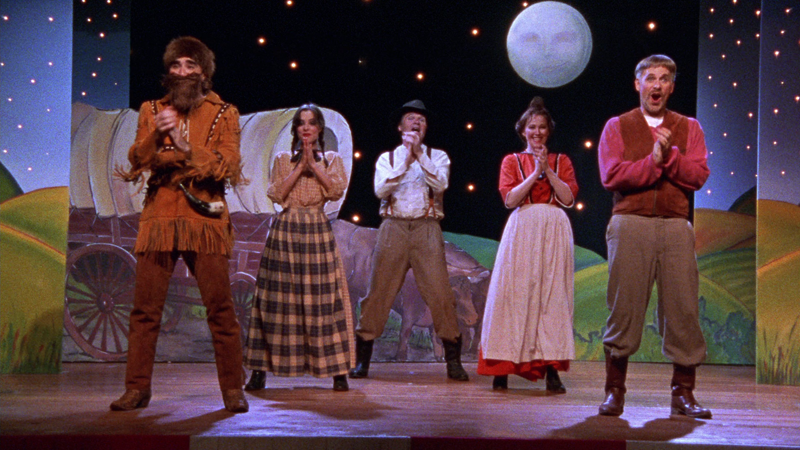 Though some consider Best in Show to be Guest's best work, and A Mighty Wind to be his most entertaining--thanks largely to the music--Waiting for Guffman is probably the purest distillation of his take on the mockumentary, in part because the smaller cast allows for more focus on the characters and the truly small-town setting brings with it certain elements that work tremendously well for the genre, mainly the seriousness with which the characters approach their somewhat silly activities. To someone who is about an hour from the Great White Way, a rinky-dink play in a school gymnasium is not a big deal, but to the characters here, it is everything, which heightens the comedy and gives motivation to their thoughts and behaviors, helping make them more than just targets of the laughs, as they hope that their show will be the springboard to Broadway, courtesy of a review by the visiting Mort Guffman from New York City.

Of course, the reason why this tale of community theater and the outsized dreams of its cast works so well is the incredible cast. It's here where Guest's troupe was formed, starting with Fred Willard and Catherine O'Hara as Ron and Sheila, a pair of travel agents with the acting bug, who have almost never left the confines of their tiny Blaine. Ward is his bombastic blockhead best, while O'Hara gets a bit more meat to chew on as his secretly unhappy spouse, and together they epitomise the idea that a modicum of fame (or even the potential of it) can lead to delusions of grandeur. You can see the same issue with the local dentist Dr. Pearl (a delightful Eugene Levy) and Libby (Parker Posey), a young lady with smaller dreams than the others, who still falls for Corky's talk of the big city. They are surrounded by a host of fantastic improvisors, including Larry Miller, Michael Hitchcock, Don Lake and Bob Balaban, not to mention Lewis Arquette and David Cross, all of who combine to create a very real world that's also incredibly funny.

The thing about the show, however, which takes up nearly a quarter of the fast-moving 87-minute film, is the fact that, outside of the character's acting abilities and the low-budget sets, it's actually pretty entertaining, especially when it comes to the songs, which were provided by the guys of Spinal Tap: Michael McKean, Harry Shearer and Guest. Tunes like "Nothing Ever Happens on Mars," "Stool Boom" and the wonderful "A Penny for Your Thoughts", would be legitimate stage songs if sung with real talent (unlike the half-measures the cast portrays.) And as the show's narrator, Arquette is folksy and fun, the perfect fit for the town.

When the curtain falls on Red, White and Blaine, the story's not over, and we see what the near future holds for the quintet. It's here where all the character building that happened over the course of the film pays off, as the epilogues wouldn't matter nearly as much if we hadn't gotten to know the characters to the degree we had. The result is a film that tops off its comedy with a dollop of darkness that, rather than being depressing, simply confirms the sense of fictional realism and reaffirms its core theory. You could say that without tragedy there can be no comedy, or that maybe we have been just laughing at these small-town bumpkins after all, but either way, there are laughs to be had in life, and often it's those who take themselves a bit too seriously who end up the butt of the joke. 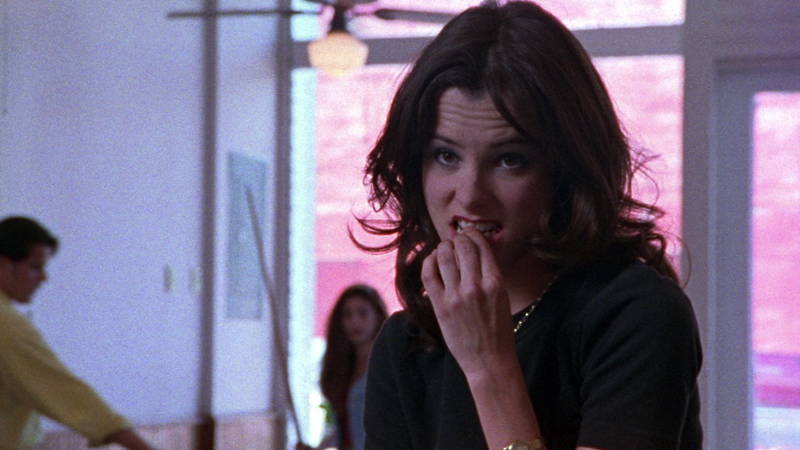 The Disc
Part of the Warner Archive manufactured-on-demand series, Waiting for Guffman, is a one-disc release packed in a standard Blu-ray keepcase. The Blu-ray features a static menu sporting the same cover art with options to watch the film, adjust languages and check out the extras. (So, no scene select.) There are no audio options, but subtitles are available in English.

The Quality
The film has received a new high-definition master for this 1.78:1, AVC-encoded 1080p transfer, and comparing it to the previous DVD reveals just how much the look has improved. Annoying problems like frequently-present jitter have been eliminated, fine detail is sufficiently high for the low-budget film (revealing some previously unnoticed visual elements) while color saturation has been markedly improved (even if the film doesn't boast the most vibrant palette to start with, as the film has a very naturalistic look, with deep reds popping the most, but avoiding blooming.) Dirt and damage are not an issue, nor are digital distractions, resulting in a clean, tight image, while the consistent grain can look a bit noisy up-close, but from a proper distance the movie looks tremendous.

Approximating the sound mix of documentaries of the era, the DTS-HD Master Audio 2.0 track focuses on getting the dialogue right, and it does that well, making sure the voices are nice and clear. The music in the film is delivered with a bit more power, but there's still the appropriate feel of a live capture from in the room. There's definitely nothing to complain about when it comes to the sound on this disc.

The Extras
With the exception of some text screens, the extras from the DVD release have been thankfully carried over to this Blu-ray disc, starting with an audio commentary featuring Guest and Levy. It's a somewhat dry affair, though the pair obviously have a natural rapport with each other, joking about various parts of the film and the very idea of what to provide during a commentary. There's frequent discussion of elements that were winnowed out of the film by final cut and how various characters and storylines developed (including an alternate, unshot ending for Corky), as well as Guest's torturous editing process. It's informative and amusing enough for fans to listen through, but it's not as funny as you might expect for two stars of this film.

Guest and Levy also provide optional commentary for a run of 14 unused scenes, which run 34:04. Amongst the excised moments are a scene where Sheila's sadness is depicted with much more certainty, Libby does a fascinating audition monologue (written by Posey), we get to see Frances Fisher's deleted character and two unheard song and dance numbers, along with some alternate epilogues, all of which make this reel worth checking out.

Wrapping things up is the film's theatrical trailer (2:03), which does an effective job of summarizing the movie. It also shows just how bad the film could have looked. 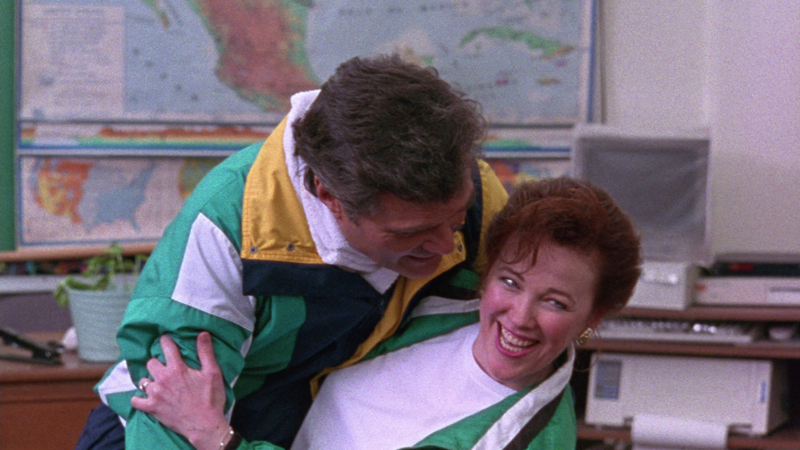 The Bottom Line
Waiting for Guffman gets a lot out of its cast of quirky characters, allowing the audience to become enamored with them, while still holding them up to ridicule for their choices and mindsets. Have some tremendous comedic talent ham it up as bad actors and give them fun songs to sing, and you have a recipe for something fun and great. Warner Archive has brought this gem to HD with a solid presentation, and brought along the archival extras to boot, making this an easy choice for an upgrade and a must-watch for comedy fans. Francis Rizzo III is a native Long Islander, where he works in academia. In his spare time, he enjoys watching hockey, writing and spending time with his wife, daughter and puppy.Follow him on Twitter