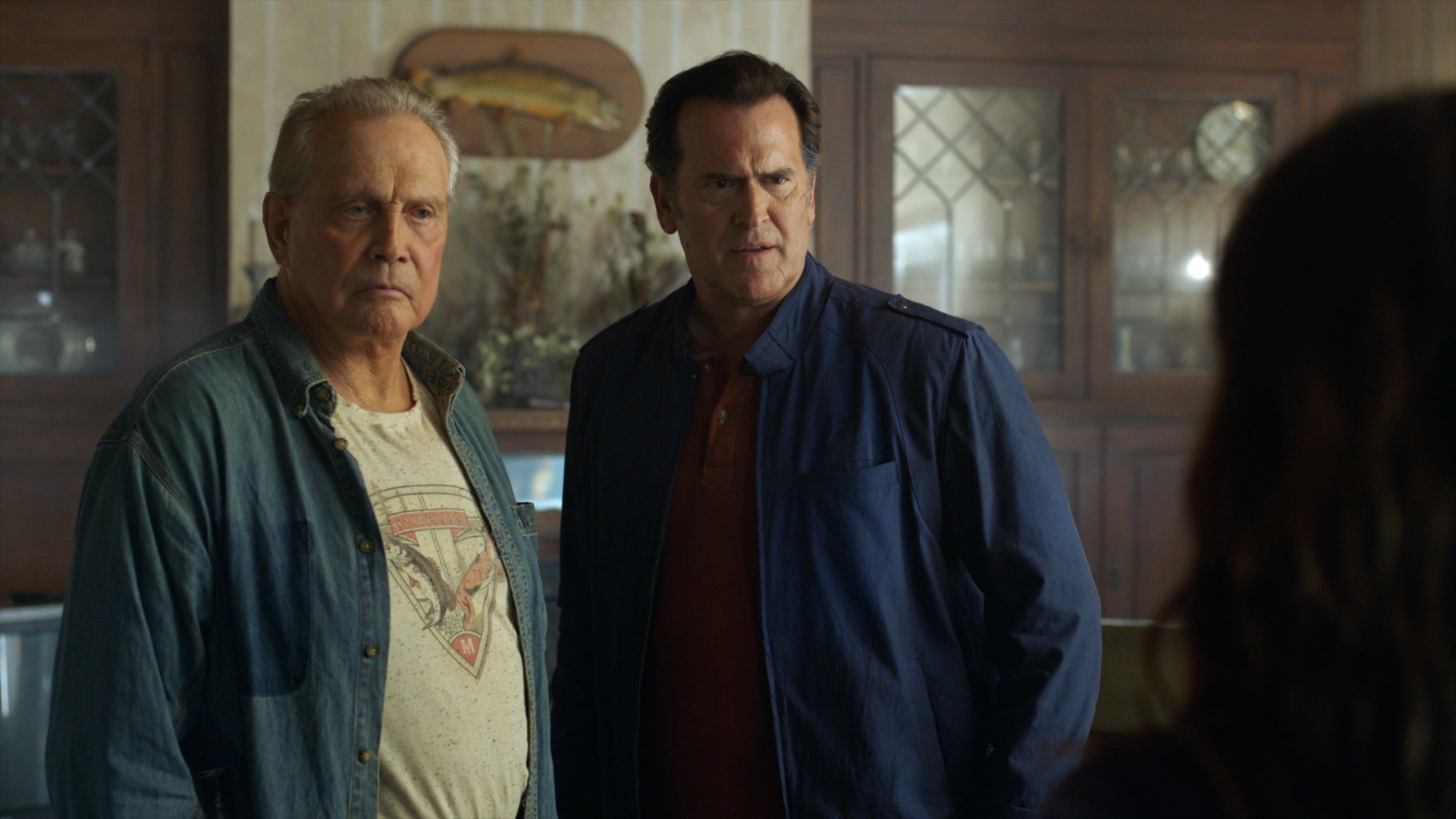 Hail to the king! Ashley James Williams ("Ash" to friend and foe alike) returns for a second season of bloody fun in Starz's Ash vs Evil Dead, and it doesn't disappoint. While Season 1 was a wonderful surprise and immensely entertaining, Season 2 outdoes its predecessor in gore, humor, and creativity. It's groovy, baby.

The first season of this series ended with Ash (Bruce Campbell) and his younger companions Pablo (Ray Santiago) and Kelly (Dana DeLorenzo) making a truce with the evil Ruby (Lucy Lawless), turning the Necronomicon (aka "Book of the Dead") over to her in exchange for allowing the three of them to retire in peace to Jacksonville, Florida. Well, that deal didn't last long as Ruby's hellish spawn are out to claim the book from her, including going after Ash and his friends down in Florida.

All roads lead back to Ash's hometown of Elk Grove, Michigan, where the locals are less than thrilled to see their prodigal son return. While we know Ash has saved the world (more than once), everyone back in Elk Grove thinks Ash is just some unhinged looney who went crazy at a cabin when he was younger and chopped up all his friends. In a great bit of "stunt" casting, Lee Majors has been brought on board in Season 2 to portray Ash's father, Brock. If you've ever wondered where Ash gets his horn-dog attitude when it comes to the ladies, you'll figure it out pretty quickly once his father appears on screen.

Ruby eventually arrives in Elk Grove as well, and Ash makes yet another uneasy truce with her in order to take on the evil that is coming after them. Without giving too many of the surprises of Season 2 away, the remainder of these episodes cover everything from Ash questioning his own sanity to the return to that infamous cabin in the woods where it all went down so many years ago. It's a really fun ride, all punctuated with enough gore (the series seems to revel in drenching its actors in fake blood in almost every episode) to keep even the most die-hard horror fan entertained.

The ending to Season 2 proves to be shocking in that it seems to provide our characters with a semi-happy ending, although not without a hint that their story isn't quite finished yet...and it's not. As of this writing, Season 3 is already wrapped, edited, and ready to go - although Starz has made the decision not to air the next season this fall (as the first two did), but instead hold it off for sometime in early 2018.

Even if you're not a horror fan (and this writer has never been much of one), it's hard not to fall in love with this series. Sure, it can get incredibly gross at times (Season's 2 "The Morgue" features perhaps the most disgusting thing ever seen on TV - which still manages to be hilarious to watch), but there's a charm to it that is undeniable. Season 2 opens some new aspects of Ash's character we haven't seen before, with the promise of more to come in the future. This Blu-ray release is a must-own.

The second season of Ash vs Evil Dead chops its way onto Blu-ray with packaging that has the two 50GB dual-layer discs housed inside an eco-friendly Elite keepcase along with a slipcover with artwork matching that of the case. There are no inserts (and no digital copy) included. Neither disc contains any front-loaded trailers, and the menu begins with a short montage of footage followed by a still of the main characters with menu selections across the bottom of the screen.

The Blu-rays in this release are region-free.

Each episode of Ash vs Evil Dead was shot digitally on Arri Alexa equipment and is presented in the 1.78:1 aspect ratio. As transfers of digitally shot television series go, this is a quality presentation with lots of detail and bright colors at times and no major problems with shadow delineation when the series goes into some of its less-well-lit environments. Skin tones are consistent throughout - assuming they're not drenched in blood, of course.

In terms of any glitches in the presentation, there is a very small amount of noise that creeps into the background of shots from time to time, but it's likely only to be spotted by those with particularly large screens. Other problems like banding and aliasing are non-existent - or at the very least to such a minor degree that they were not spotted by this reviewer. While I don't think the video here approaches reference-quality, it's still very impressive and viewers should have no complaints.

English 7.1 Dolby TrueHD is the featured audio for the 10 episodes on this release. The audio mixes for each episode have a lot of fun. There is plenty of surround activity, with things springing to life on one speaker or another, as well as an abundance ambient sounds, all of which often provide for an immersive feel to the presentation. Dialogue is clear throughout, with no hint of muddiness or other defects. Overall, these are very well-rendered tracks and add a lot to one's enjoyment of each episode.

In addition to the lossless 7.1 English tracks, tracks are also available for each episode in Spanish Dolby Digital Surround 2.0 and French Dolby Digital 5.1. Subtitles are an option in English SDH, Spanish, and French. 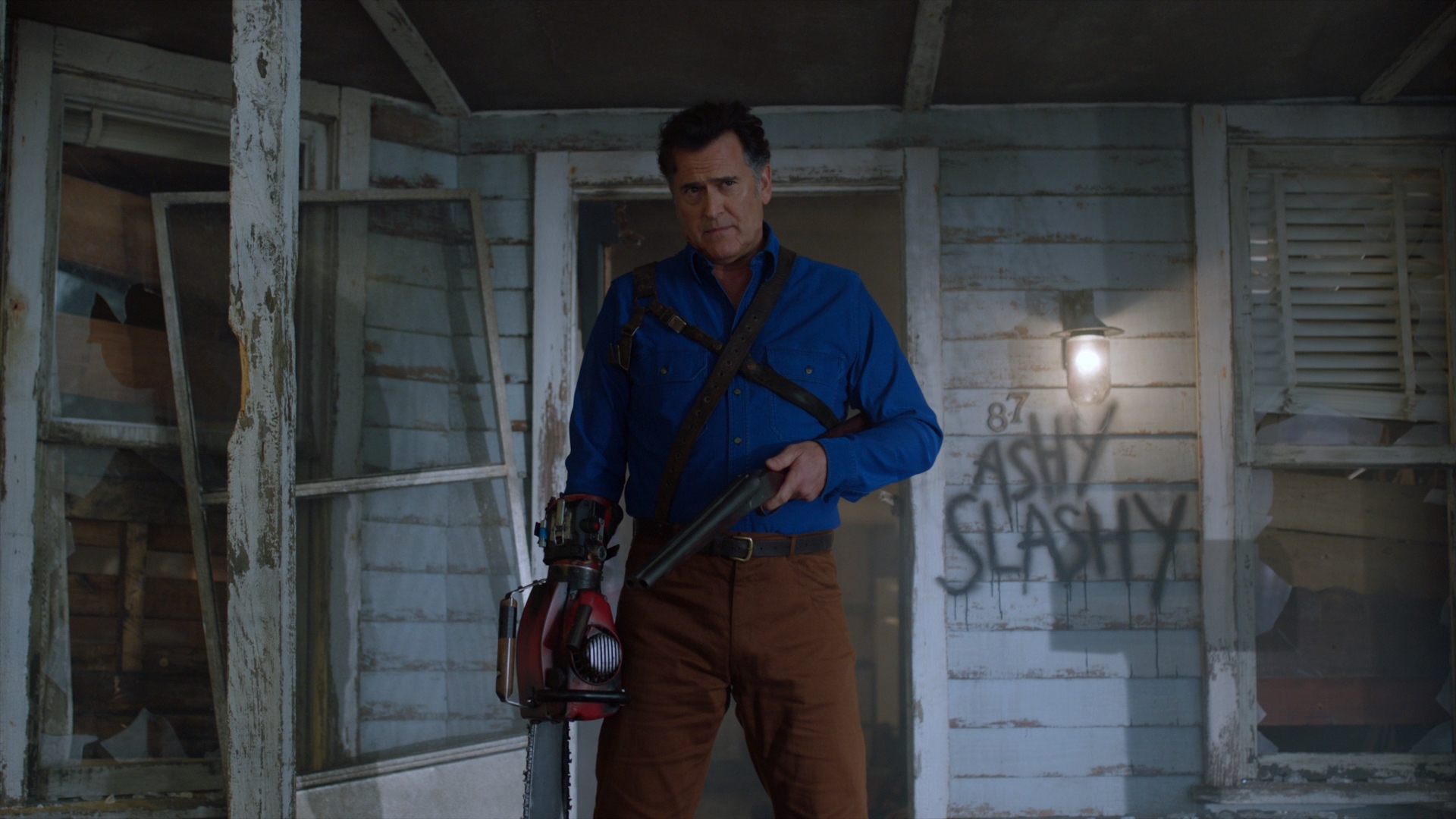 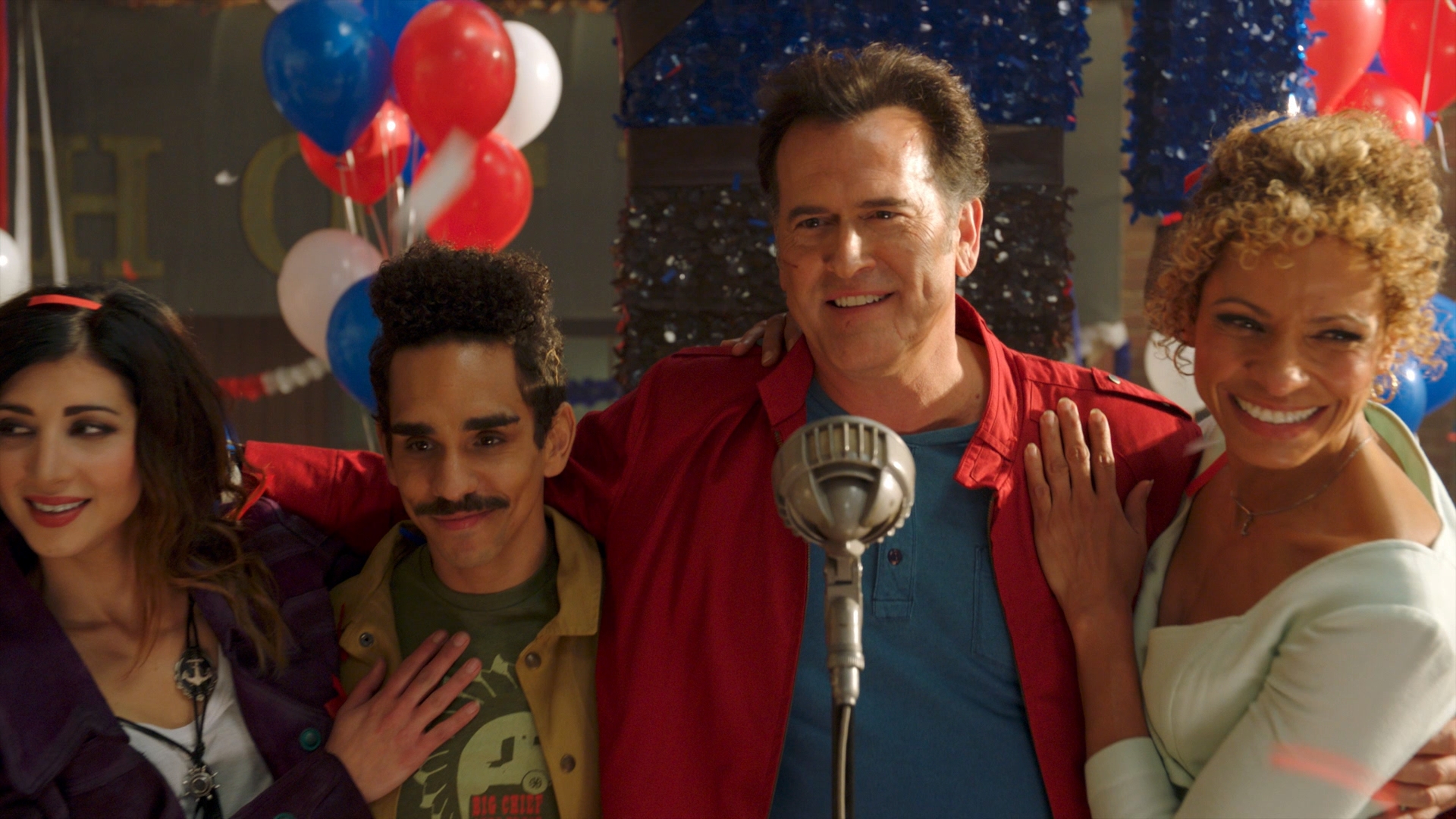 Even for someone like myself, who has never been a fan of horror or gore, Season 2 of Ash vs Evil Dead is a blast. Filled with creative moments and Bruce Campbell's wonderful portrayal of one of the genre's most popular characters, you'd have to be a deadite not to enjoy these 10 episodes. Highly Recommended.