Good Place: Season One, The 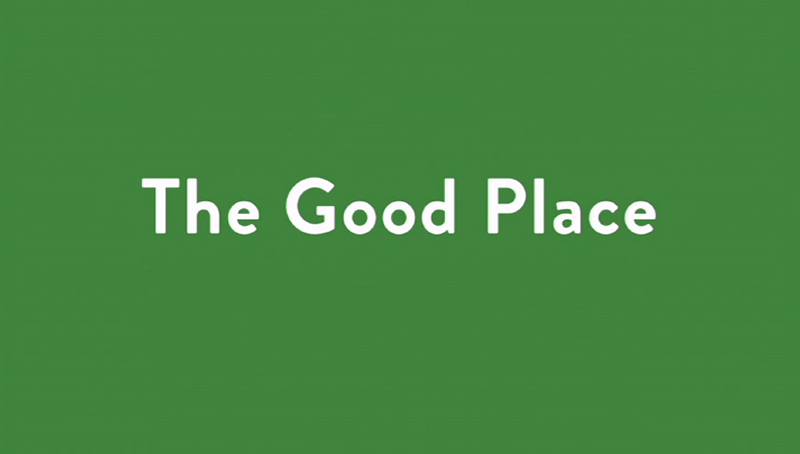 
The Show
From the moment Eleanor (Kristen Bell) opens her eyes at the beginning of the first episode of The Good Place, the show is obviously not the usual sitcom. Having recently died, Eleanor is now in The Good Place--a non-denominal version of heaven--where everything is perfect and everyone is happy, because everyone in The Good Place has earned their spot through their positive behaviors on Earth, including charity-driven model Tahani (Jameela Jamil), ethicist Chidi (William Jackson Harper), and Jianyu, a pious monk (Manny Jacinto.) The problem is, Eleanor doesn't belong. She was--and still is--an awful person, and her presence is damaging The Good Place, much to the chagrin of Michael (Ted Danson) the architect of this iteration of The Good Place. And an anonymous person has made it known to her that they know the truth.

Somewhat serial in construction, giving out bits of background and plot with each half-hour episode, the show is based around a mystery, and that mystery unfolds with plenty of twists and turns along the way, as well as plenty of comedy. (Philosophy and ethics also play a surprisingly large part in the show, integrating well with the rest of the ingredients.) To discuss any of the plot would certainly ruin the show for those who haven't watched, but the revelations at the end of the first season are a huge payoff for everything that came before, rewarding viewers who are paying attention along the way. The story is mostly self-contained within the first season, with a satisfying conclusion, making the second season feel like it could be too much of a good thing (and the first two episodes of the second go-around only furthered that concern.) But that doesn't take away from the experience of this tale, which is fantastical in many ways, but grounded and relatable. 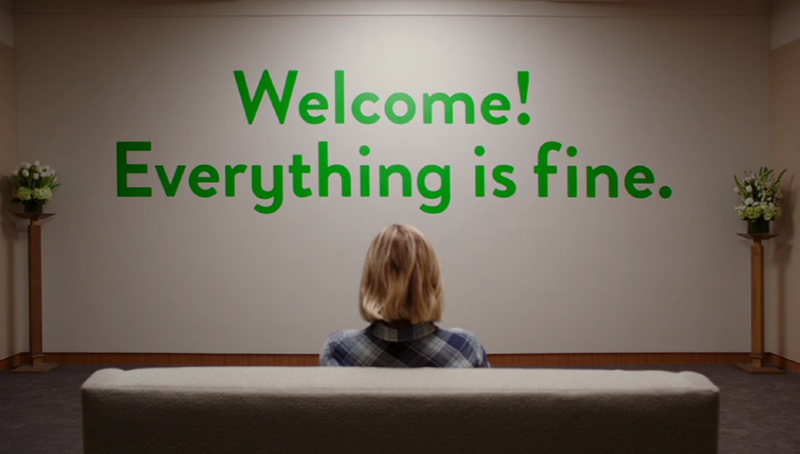 Though the story is well-constructed and enjoyable in the way it's told--both unique and innovative, yet completely approachable, despite the heavier aspects--it's the cast that sells the show, starting with Bell, who was a perfect choice as our street-trash heroine Eleanor. Whether she's swearing in the censored way The Good Place only allows or frustrating Chidi with her selfish, lazy ways, she's consistently funny, while her growth during the course of the season is completely believable (even if there is a moment that severely tests one's ability to suspend disbelief.) The likability factor is high on this show, as Danson is in peak form as Michael (easily one of the best characters he's ever played in terms of range and comedy), and Jamil and Harper are delightful in their debuts as leads, with both bringing silliness and humanity to their parts. As for Jacinto...maybe he's a nice guy stuck with a weak role, Either way, he's the least enjoyable part of the show.

As for the best part, that's got to be D'arcy Carden's hilarious, omnipresent assistant Janet, whose understanding of humanity is slight, while her desire to please is limitless. At least twice an episode, Janet will simply steal a scene with a ridiculous line or reaction, making her every appearance a reason to smile. When, at one point, her knowledge of The Good Place is compromised, her confusion makes her even funnier. For Carden, it's a gift of a role, as she gets to play around and portray Janet a number of different ways (including a variant known as Bad Janet), and every single version is hysterical. Impressively, the show--which features an all-star crew including creator (and Parks and Rec alum) Michael Schur; writers Joe Mande, Megan Amram and Alan Yang; and directors Drew Goddard, Beth McCarthy-Miller and Tristram Shapeero--didn't abuse a powerful weapon like Carden's Janet and sprinkled her in to great effect throughout the season. (Again, I would say more about the performances, but they are intrinsically tied into the plot, so no spoilers.) 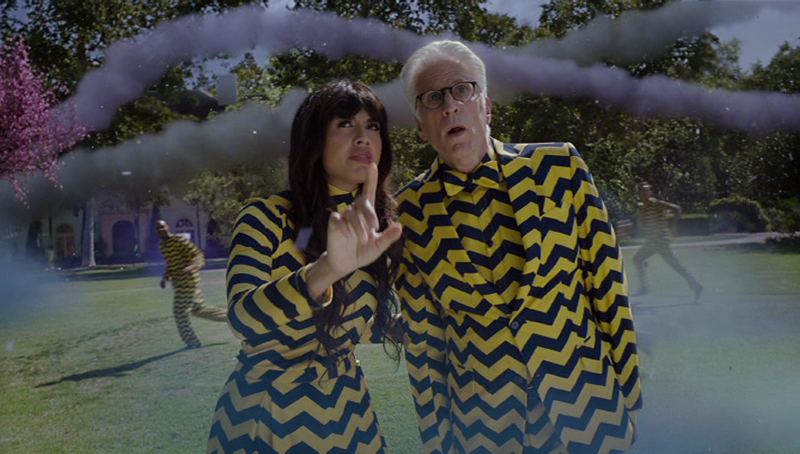 The Discs
The 13 episodes of the first season of The Good Place are delivered on two DVDs, which are packed in a clear standard-width, dual-hubbed keepcase with a two-sided cover that has an episode listing on the inside. The static, anamorphic-widescreen menus have options to play all the episodes, select shows and check out the extras (if applicable.) There are no audio options and no subtitles.

The Quality
Thanks to the clean, idyllic nature of The Good Place and the fantastical elements that frequently are a part of the show, this series has a distinct visual style, which these standard-definition, anamorphic-widescreen transfers deliver quite well, with solid saturation and appropriate skin tones, while the level of fine detail is high enough to show all the jokes hidden in the backgrounds (like the many different restaurant names.) Cramming 13 half-hour episodes onto two DVDs isn't ideal for the quality, but there doesn't look to be much in the way of digital distractions, with a pleasing image as the final result.

The Dolby Digital 5.1 tracks dont have a lot to do with the dialogue, as that mainly takes up residency in the center channel, but the surrounds do handle the jazzy, upbeat score on the show, along with some transitional audio elements, along with some decent atmospheric effects. The low-end is surprisingly present in the score, providing some punch throughout. The entire aural presentation is free of any issues with distortion.

The Extras
Shout! Factory stepped up to save The Good Place from physical media purgatory, and took things a step further by providing some legitimate bonus content, starting with a pair of audio commentaries with Schur, Goddard, Jamil and Carden. However, because this set includes the extended versions of both the season premiere and the season finale (which combined two episodes into one), it actually makes it four commentaries. Chatting in a very silly, friendly manner, the quartet covers a variety of topics, including the origins of the project, Goddard's TV-watching habits, casting the characters and Max Greenfield's influence on the show. The tracks are not heavily informative, but the blend of entertainment and insight makes them a fun listen.

For the show's first-season wrap party, a 10:05 gag reel was put together, anchored by Adam Scott (in his The Good Place character.) There's a lot of the usual gag-reel content, done with a theme that ties into a concept on the show, and offers up one hilarious line from Carden and several belches from Bell. Worth a look, as the actors raise it above the norm.

"A Look at Visual Effects" is quite brief at 1:17, but via splitscreens it shows how scenes look before and after CG goodness is added in, so there's something of interest there.

The bonus content wraps up with a table reading of episode 12 (28:45). Shot with one camera from a high angle, it's a bit of a static affair, but as the runtime shows, it's a longer version of what aired, so you get to hear some bits that didn't make it to the final cut. 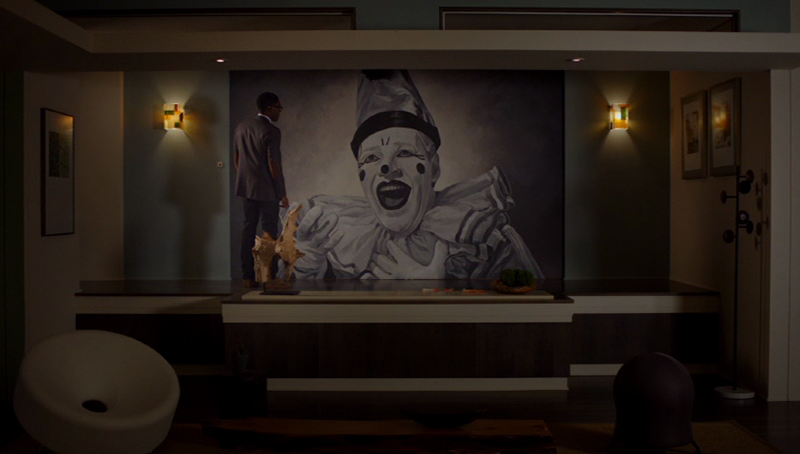 The Bottom Line
If The Good Place was a movie, it would be a cult classic, revered by its fans and critics alike for it's wonderful story, great performances and enjoyable style. As a series, it has more room to roam, and more opportunities to explore its characters, which spreads things out a bit and creates chances to meander a bit, but in the end, the first season is funny, unique and satisfying. This DVD presentation is solid, with a nice array of bonus content for fans to check out, making it a set that those familiar with the show will want to revisit, while newcomers get a chance to see what they missed the first time.