Universal // Unrated // August 29, 2017
List Price: $32.67 [Buy now and save at Amazon]
Review by Stuart Galbraith IV | posted October 11, 2017 | E-mail the Author
Pity the Chicago franchise fan. Fans of Chicago Fire (2012-present) are pretty much obliged to follow the entirety of executive producer Dick Wolf's vast television universe. That because characters from Chicago Fire frequently appear in episodes of all of the shows spun-off since: Chicago PD, Chicago Med, newcomer Chicago Justice and even Law & Order: SVU, set and filmed in New York. There have been story arcs crossing over up to three different series, and sets from one show (such as Molly's the bar opened by several Chicago Fire characters often appear in the others. Contracts for the cast members of these programs must be as thick as phonebooks.

Living in Japan, this far-flung reviewer (and hard-media holdout) watches most "new" American and European TV shows on Blu-ray and DVD, and is usually a season behind everyone else. Because of all the crossover shows and long character arcs, I'm compelled (as, I'm sure, are others) to figure out the correct viewing order for these programs, no easy feat considering for the 2016-2017 season Chicago PD and Chicago Med aired first, followed three weeks later by the first new episode of Chicago Fire, while Chicago Justice, a midseason replacement, didn't begin airing until March 1, 2017, as the final act of a three-part crossover show beginning on Chicago Fire and continuing on Chicago PD. Confused yet? I sure am.

Chicago Fire was the first of Wolf's new run of successful shows following the gradual cancellation of all but SVU among his long-running Law & Order shows. Chicago Fire remains interesting if feeling a little tired, with storylines from its first four years reworked with minor variations. In my review of Season Four I listed some of these: "characters with jobs on the line from IAD, the Internal Affairs Department (which had already been milked dry on SVU to seemingly every character on that show at one time or another); a rescue worker becoming too personally involved with a victim; a firefighter losing his edge and running the risk of throwing away his career due to personal demons; the "one big family" rallying around a fallen comrade or pooling their ingenuity and resources to protect a local landmark or help out a down-on-his-luck neighbor." Season Five reworks a slightly different jumble of been-there and done-thats, but the same sense of déjà vu remains.

In one sense Chicago Fire is a victim of its own likeability. The characters are all brave and intensely loyal to Firehouse 51 and to one another. They're selfless and treat one another like blood siblings, By contrast the characters of Chicago P.D. are much more troubled and morally ambiguous, and hence more interesting. Chicago Med, which at first seemed like a rehash of earlier programs like ER, hit the ground running with much compelling human drama. Chicago Fire is more like a high-concept, better budgeted Emergency! the old but similarly likeable Jack Webb series from the 1970s.

But there's no denying that Chicago Fire still entertains, helped by incredible production values compared to series television of even a decade ago. 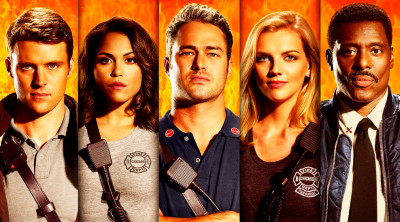 The series resembles forerunners like Emergency! in that Chicago Fire typically centers around two big set-pieces, often one major fire and one smaller scale but equally harrowing rescue operation, emergencies presenting unusual and/or dangerous accident scenes, often freak accidents. The first two seasons stuck to this formula pretty closely but veered more and more away from this during Season Three, as well as move away from its over-the-top predilection for firemen (and paramedic women) constantly stripping down for hot steamy sex scenes. And, like most television drama these days, there's usually a darker "A" story complementing a slightly lighter "B" story, often involving the veteran firefighters and their hapless business ventures and love lives. Some plots are self-contained within a single episode; others are arced over many episodes or even the entire season.

There are six major characters and myriad supporting and recurring ones, not to mention all the crossover folk. Lt. Matthew Casey (Jesse Spencer) is the no-nonsense leader of Truck 71 and part-time City Alderman, now permanently ensconced (so it would appear) with firefighter Gabbie Dawson (Monica Raymund). At the beginning of Season 5 she's adopted foster child Louie, whose status with the couple is threatened by political opponents to Alderman Casey uncorrupted, straight-shooting positions. Casey and Gabbie share about equal screentime with Lt. Kelly Severide (Taylor Kinney), of Rescue Squad 3.

Early seasons of Chicago Fire depicted Casey as the internally tormented of the two, while ladies' man Severide was more affable and easy-going, while a crack rescue worker when the chips are down. Casey's endless hardships teetered toward simply grating and annoying by the end of season two, and the show's writers shifted a lot of that millennial angst over to Severide. But Casey is still a frequently annoying character, too wholesome and steadfastly honest and pure to stomach, and he's never seemed to muster as much empathy as the show's producers had intended.

Severide, on the other hand, started out as a pretty-boy hero, model handsome (Kinney is a former model himself) with a lot more depth, and Kinney more commanding, assured screen presence than probably many expected. The show's writers don't quite know how to expand his character either, with this season Severide falling in with an Instagram millennial sensation on the nightlife circuit, and Severide's gradual falling out with such reckless shallowness.

These and other story threads shift a bit of the focus away from the older and, frankly, much more interesting characters of Senior Firefighter Christopher Herrmann (David Eigenberg), firefighter Otis Zvonecek (Yuri Sardanov), and firefighter Randall "Mouch" McHolland (Christian Stole). These guys and their back stories are always compelling but, one suspects, Wolf and/or the network may have mandated more screentime for the younger, more conventionally attractive characters, even when that means slighting the older ones, an issue that also seemed to plagued Law & Order: SVU with its underuse of its veteran supporting actors.

Twenty-two 42- to 43-minute episodes (including the crossover shows) are spread across six single-sided, dual-layered discs. The 1.78:1 enhanced widescreen shows look quite good, up to contemporary television/video standards, and the Dolby Digital 5.1 audio is, expectedly, quite lively and full of oomph. Despite its white leads, this and Wolf's other programs are notable for their balance of Hispanic, African-American, and Asian characters is sizable roles, which may account for the alternate Spanish and Portuguese audio tracks, as well as subtitle options in those languages plus French. <

Behind-the-scenes featurettes were included in the early season DVDs but not here, with extras limited to the crossover episodes.

Chicago Fire remains enormously compelling but, at least based on a viewing of the first third or so of the season, seems to be visiting the same wells again and again (as did Season Four), with too much focus on some of the less interesting characters. Still, Highly Recommended.