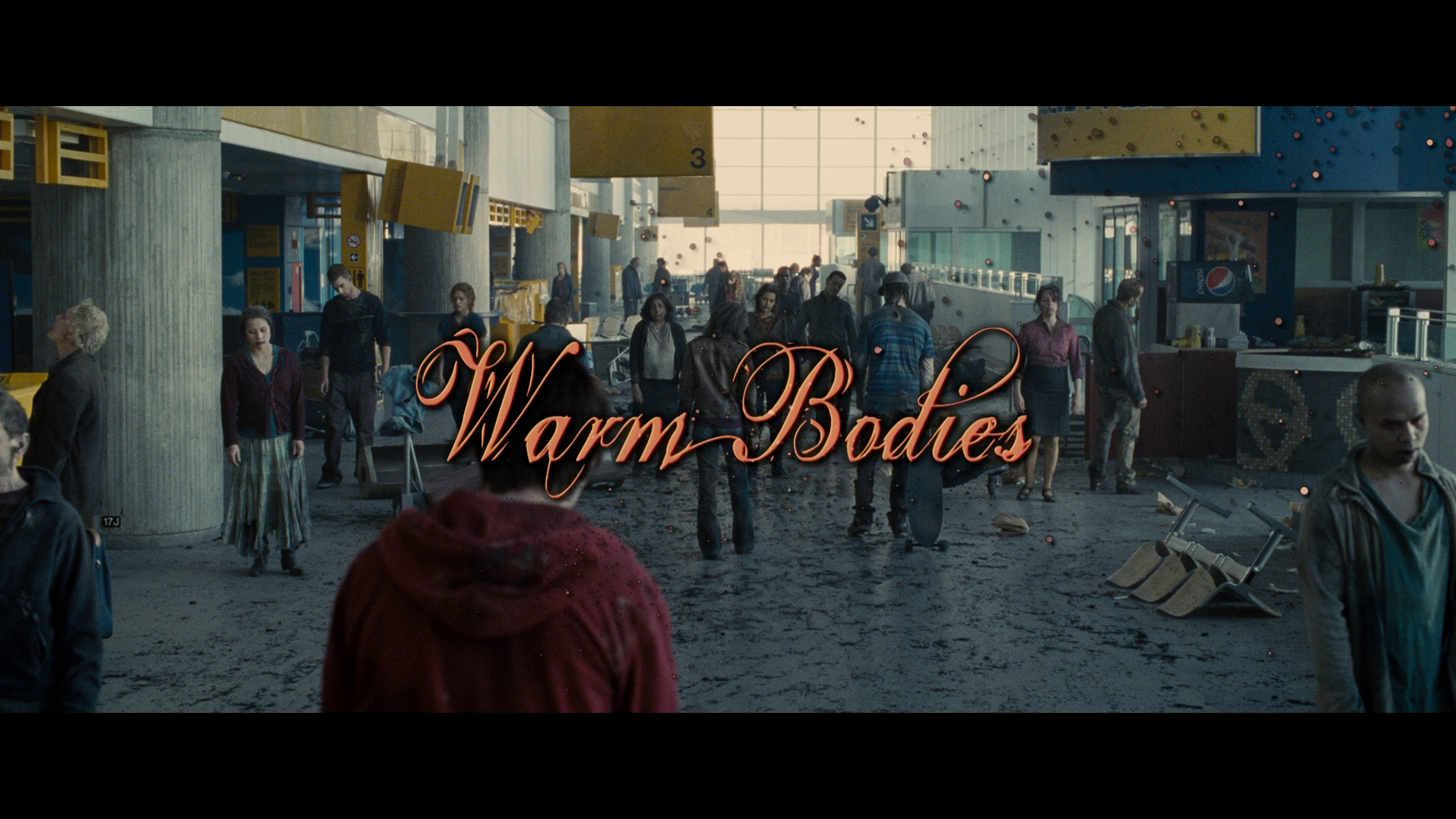 Jonathan Levine's Warm Bodies really is the best zombie love story ever. Based on a novel by Isaac Marion, the movie follows the undead "R" (Nicholas Hoult) who spends his time wandering around an apocalyptic airport. When he meets a pretty, living girl, Julie (Teresa Palmer), his heart starts to beat, and R finds himself regaining the humanity he thought he lost. Funny and uniquely entertaining, Warm Bodies is a nice change of pace from the monotonous zombie gore-fests of late. The principal cast is solid, and Hoult and Palmer are joined by John Malkovich, Rob Corddry and Dave Franco in supporting roles. Lionsgate's 4K Ultra HD release offers excellent picture and sound, and fans who do not yet own the film will likely opt for the reasonably priced 4K edition.

This movie easily could have turned into a Twilight imitator, with cloying teenage romance and eye-rolling drama. Fortunately, writer/director Levine (50/50) does not allow that to happen. Instead, Warm Bodies is handsomely shot, with cinematography from Javier Aguirresarobe, and has a great sense of humor and fun. The allusions to William Shakespeare do not go unnoticed. Is "R" our Romeo and Julie our Juliet? And is R's friend, "M" (Corddry), Mercutio? If so, the undead walkers are apparently the Montagues and Julie and her Colonel father, Grigio (Malkovich), are the Capulets. 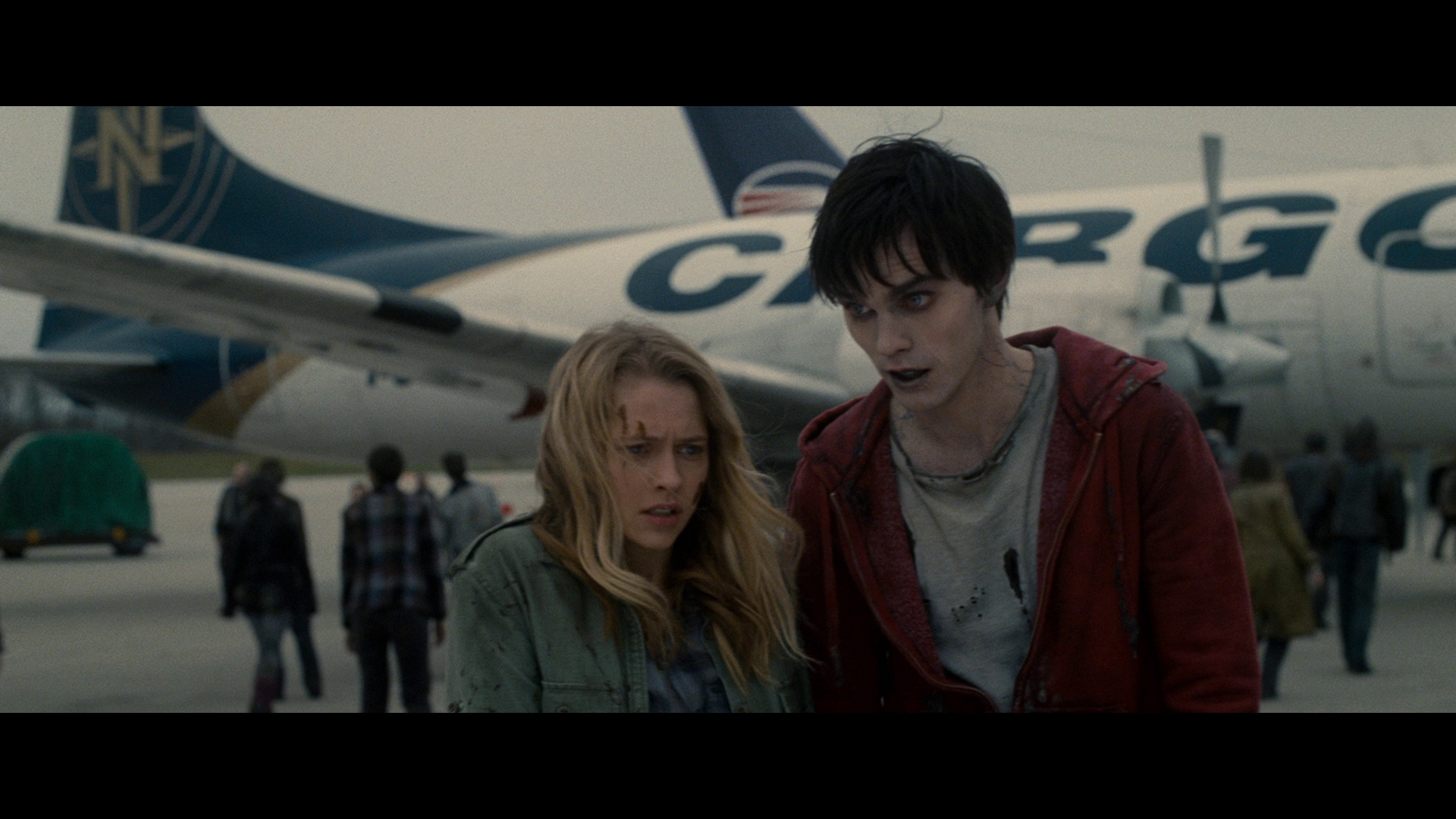 Hoult does an excellent job here, and plays R like an open book. The film opens with an extended internal monologue in which R laments his current state of being. He can vocalize words and short phrases, and "talks" with friend M in grunts and short bursts of syllables. Julie comes at the request of her father, attempting to locate medical supplies. Her boyfriend, Perry (Franco), is killed in a skirmish, and R eats his brains, which allows him to assume Perry's memories. R comments that this is the only time he feels human, and, unlike the primal "Boneys," he at least feels conflicted about killing another man. He rescues Julie after this firefight and takes her to a nearby airplane he calls home. The two bond over music and form an unlikely friendship, which ultimately leads Julie to try to convince her father that R and the other zombies may not be lost causes after all.

This is a complete mash-up of genres, and there are a couple of solid zombie action scenes that create suspense. Most of the film relies on R's humorous monologues and dry wit. The amped-up romance in act two is complemented by this humor and the ongoing action as R and Julie flee outside forces. Warm Bodies never falls into teen-romance cliches, and feels more like something Edgar Wright would direct than Bill Condon. This one kind of came and went in theaters, and I ended up catching it for the first time during its initial Blu-ray release. If you have not seen Warm Bodies, I certainly recommend you doing so, particularly if you have a 4K setup. 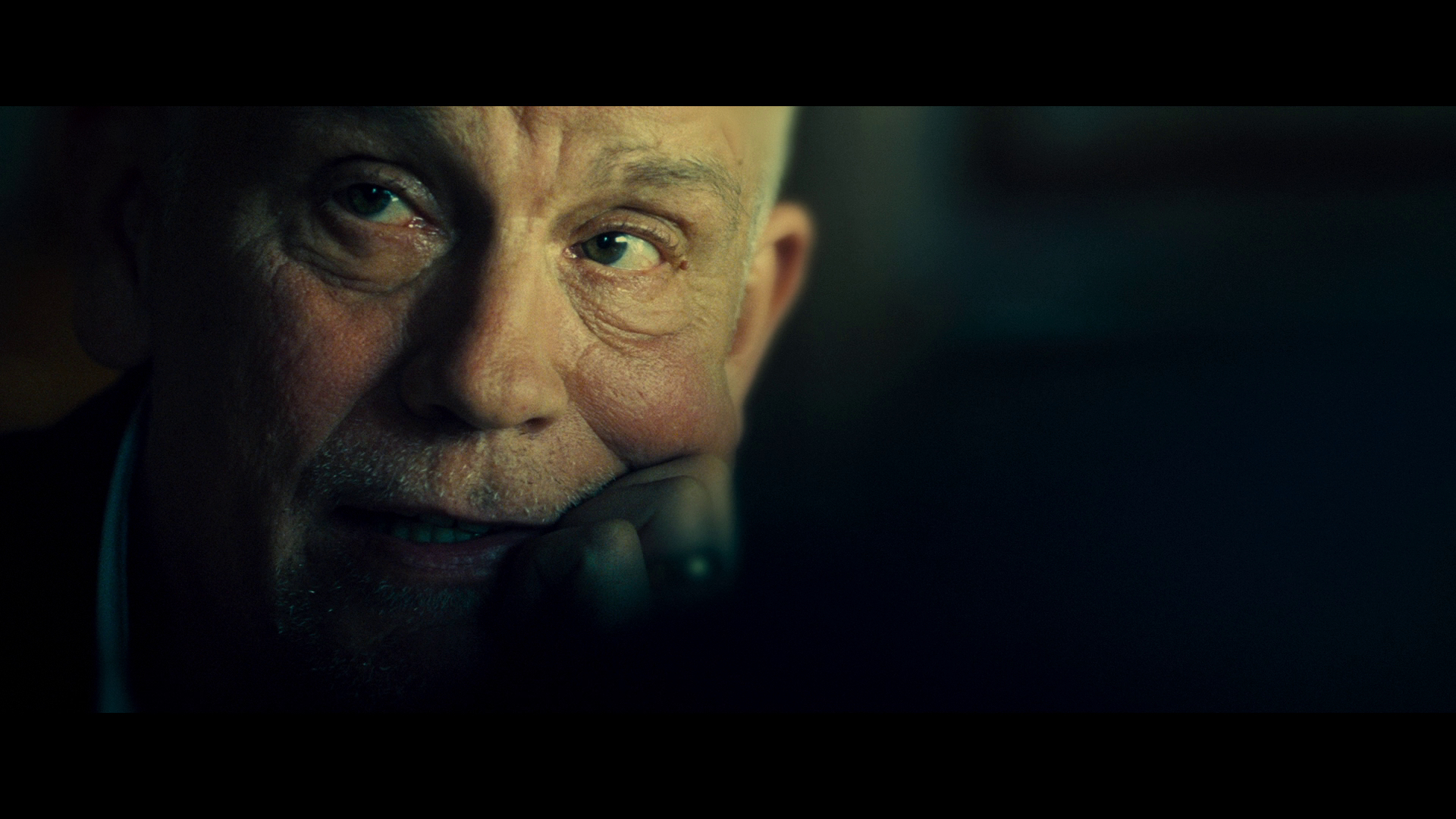 This 2.40:1/2160p/HEVC/H.265 4K transfer offers both HDR10 and Dolby Vision. The film was mastered at 2K from 35mm so this is an upscale, as are many of Lionsgate's recent 4K releases. Compared to the included HD release, there is a moderate uptick in fine-object detail, particularly in zombie faces and in the intricate apocalyptic sets. The color scheme is purposely grey, blue and brown, and, while the HDR pass may not be as noticeable under these conditions, the colors are more lifelike and nicely saturated in 4K. Black levels are slightly improved, as is shadow detail. I didn't notice any halos or aliasing.

The Dolby Atmos soundtrack, which I sampled as a 7.1 Dolby TrueHD mix, is immersive and expertly balanced. Dialogue is crisp and clear, and the track really shines when presenting environment effects in the zombie-infested airport. Action effects like gunfire and charging Boneys rattle the subwoofer and pan the surrounds, and the score and musical selections are deep and layered appropriately. French and Spanish 5.1 Dolby Digital dubs are included, as are English SDH, French and Spanish subtitles.

This two-disc set includes the 4K disc and a Blu-ray, as well as a code to redeem both iTunes and UltraViolet HD digital copies. The discs come in a black 4K case that is wrapped in attractive slipcover. Lionsgate goes the extra mile and ports all the Blu-ray's extras to the 4K disc, which is much appreciated. You get an Audio Commentary by Director Jonathan Levine and Actors Nicholas Hoult and Teresa Palmer; Boy Meets, Er, Doesn't Eat Girl (9:49/HD), about the project's genesis; R&J (16:21/HD), about the romance; A Little Less Dead (16:41/HD), about the cast; Extreme Zombie Make-Over (10:11/HD)' A Wreck in Progress (14:59/HD), about the locations; Bustin' Caps (10:09/HD), about the action; Beware the Boneys (7:04/HD), about the really bad guys; Whimsical Sweetness: Teresa Palmer's Warm Bodies Home Movies (12:38/HD), shot by Palmer on her iPhone; Zombie Acting Tips with Rod Coddry (4:43/HD); Deleted Scenes with Optional Commentary by Levine (11:11/HD); Shrug & Groan Gag Reel (5:07/HD); and the Theatrical Trailer (2:32/HD). 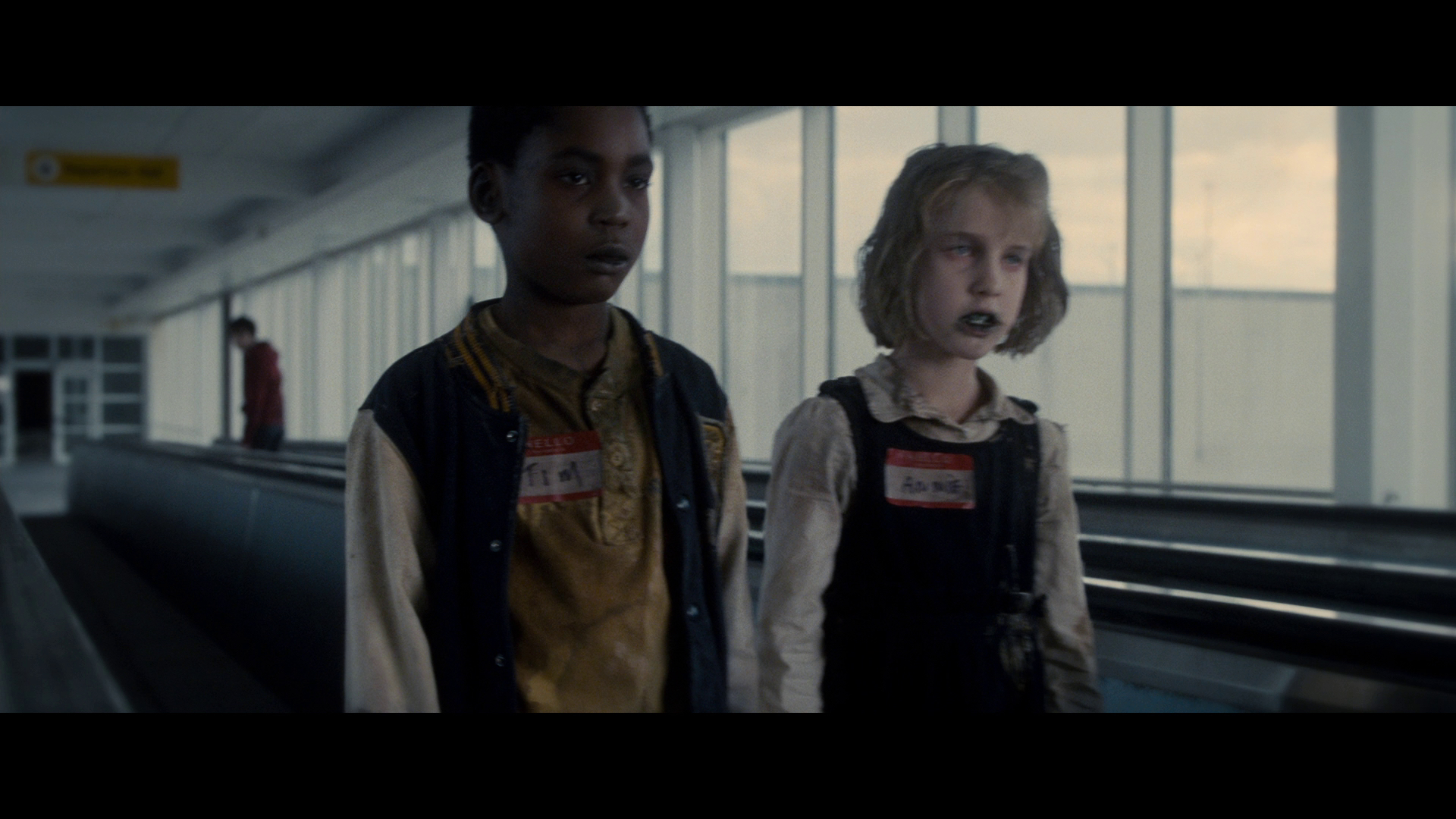 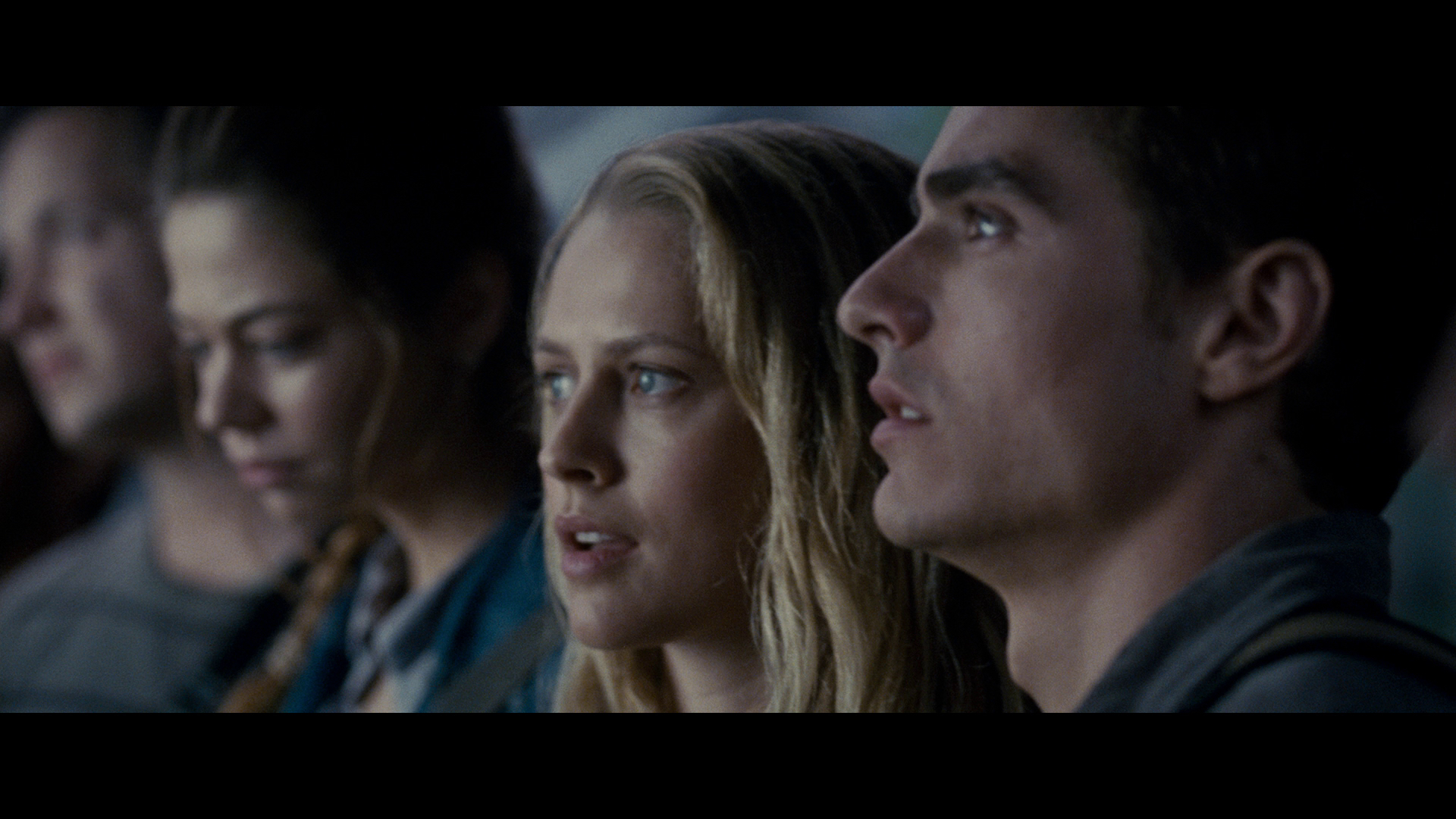 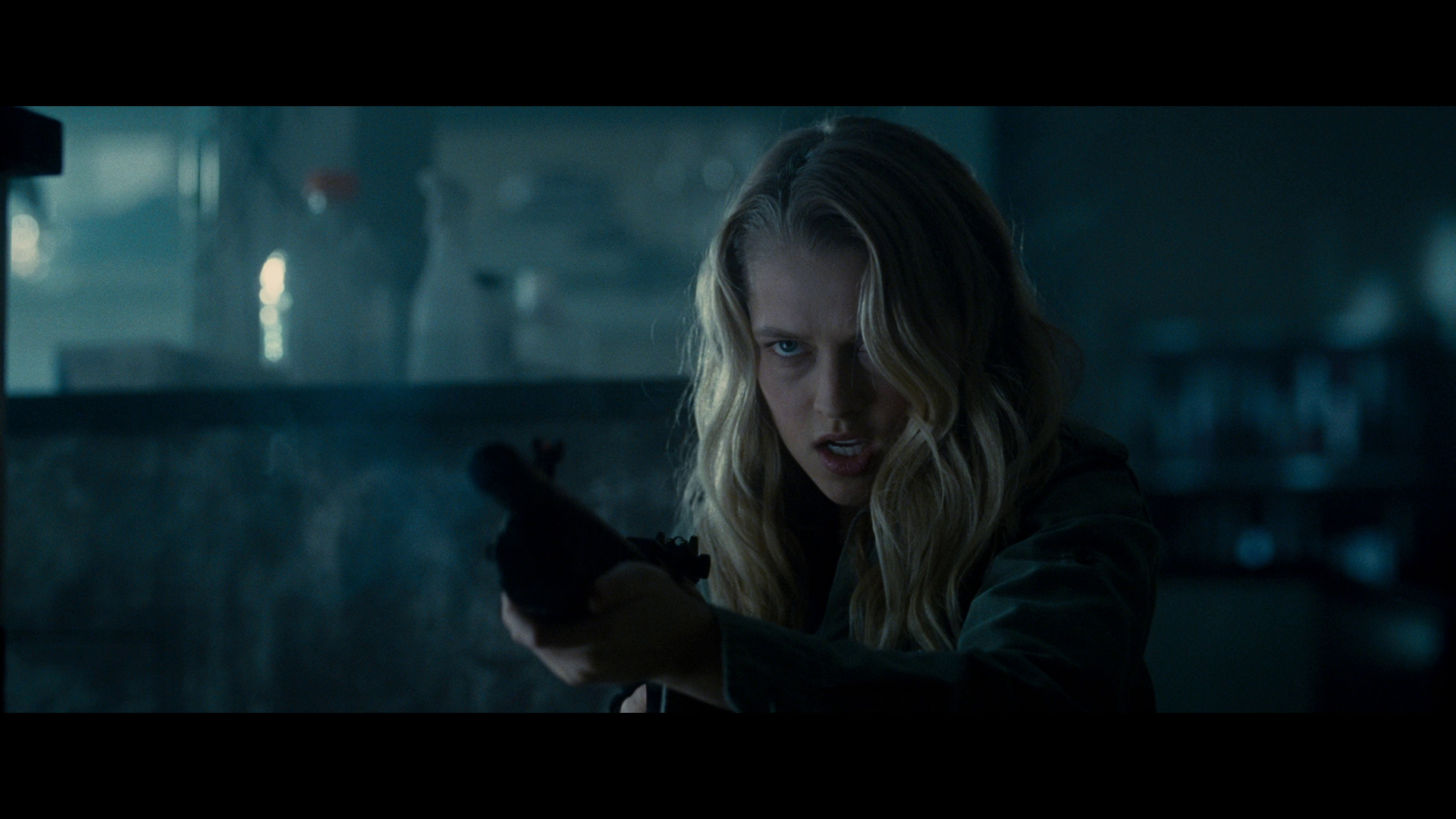 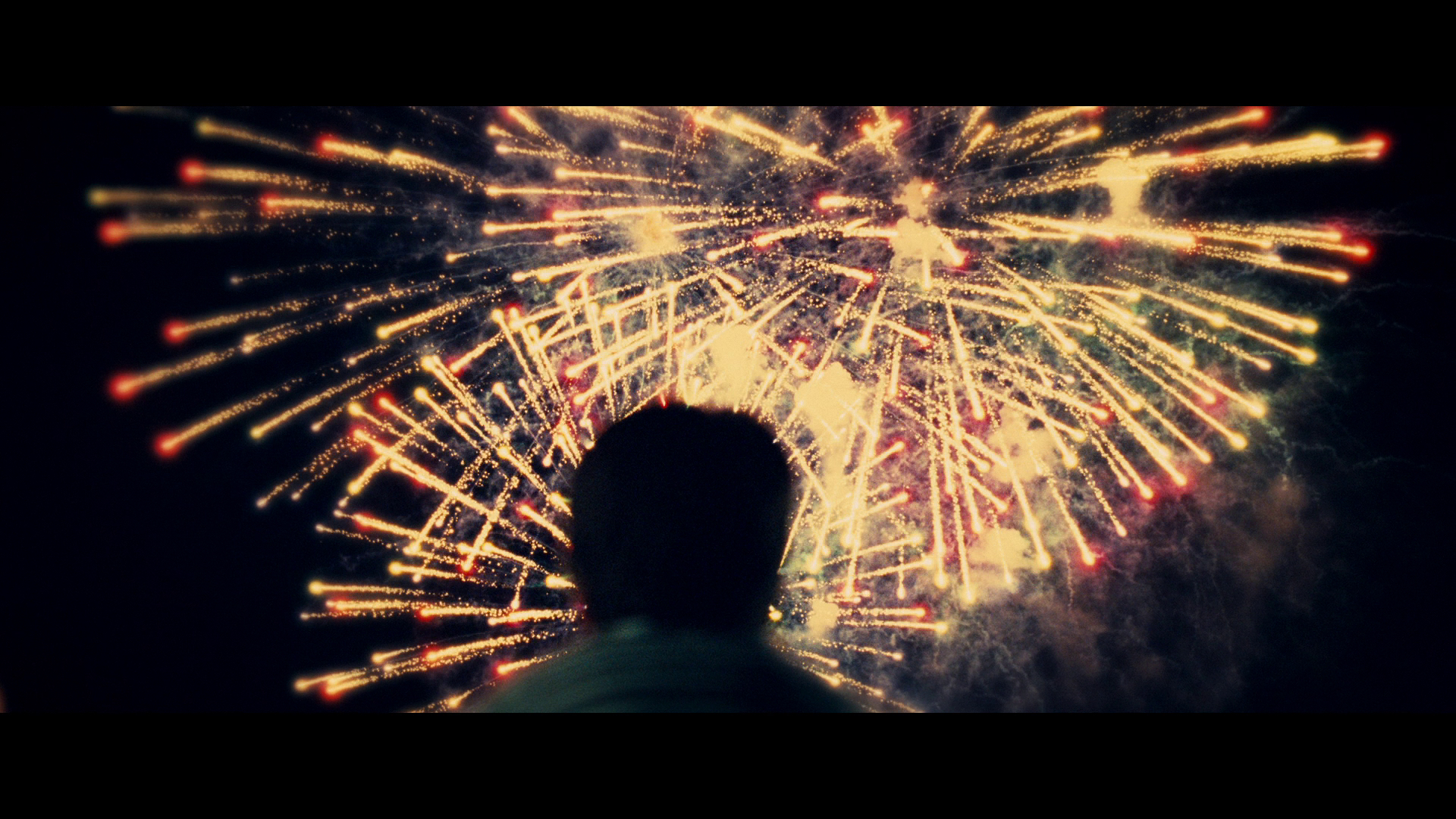 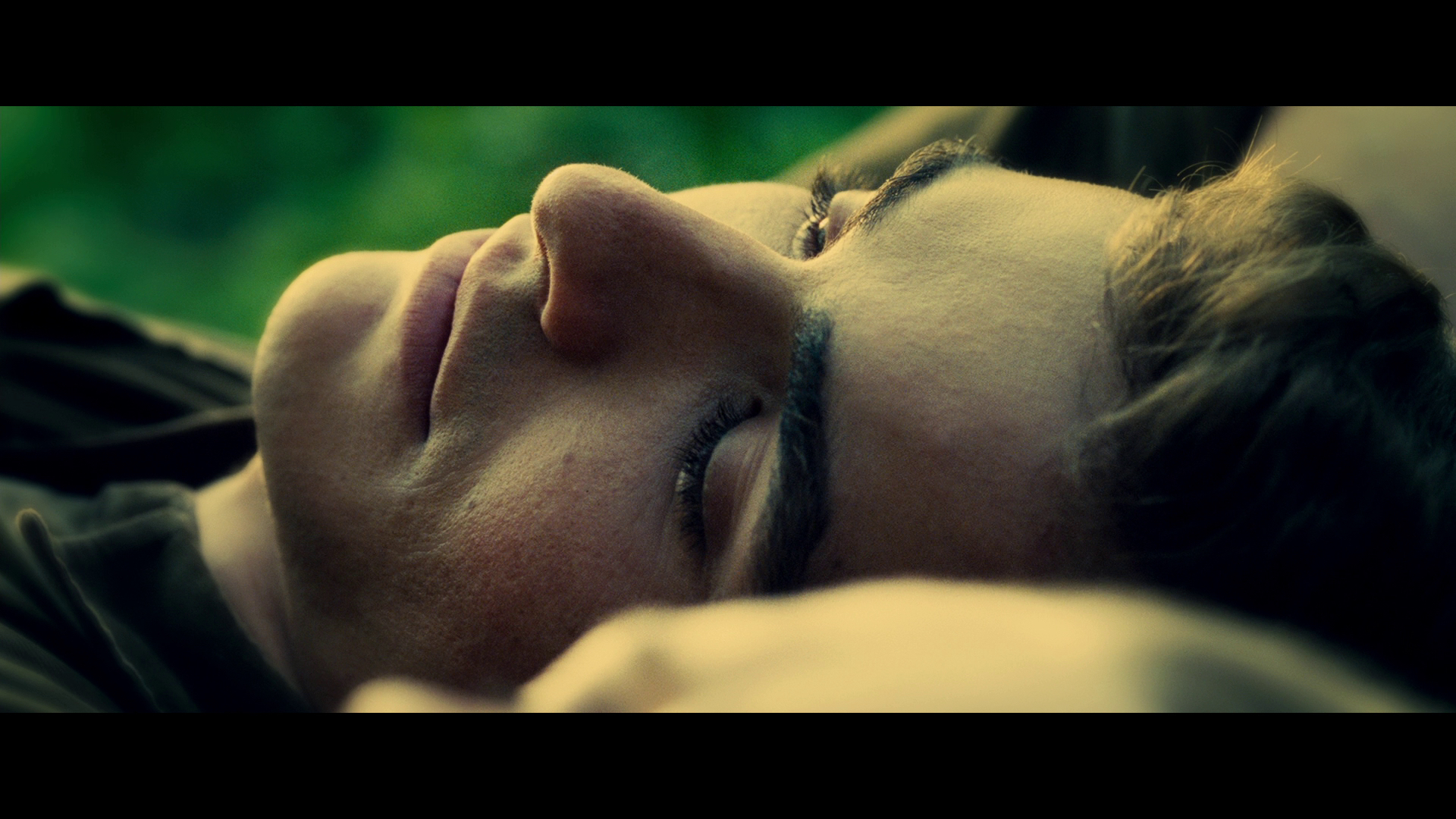 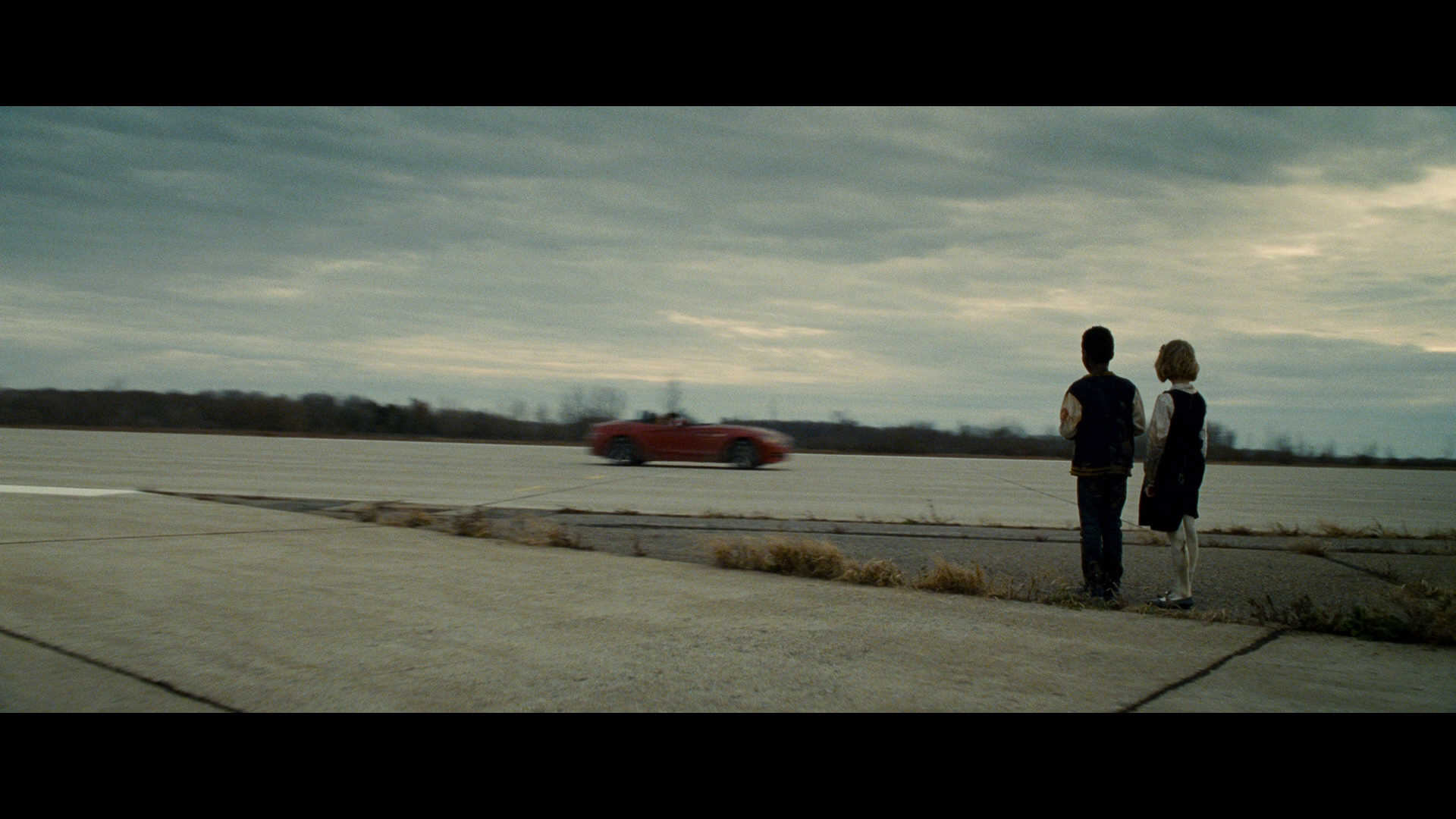 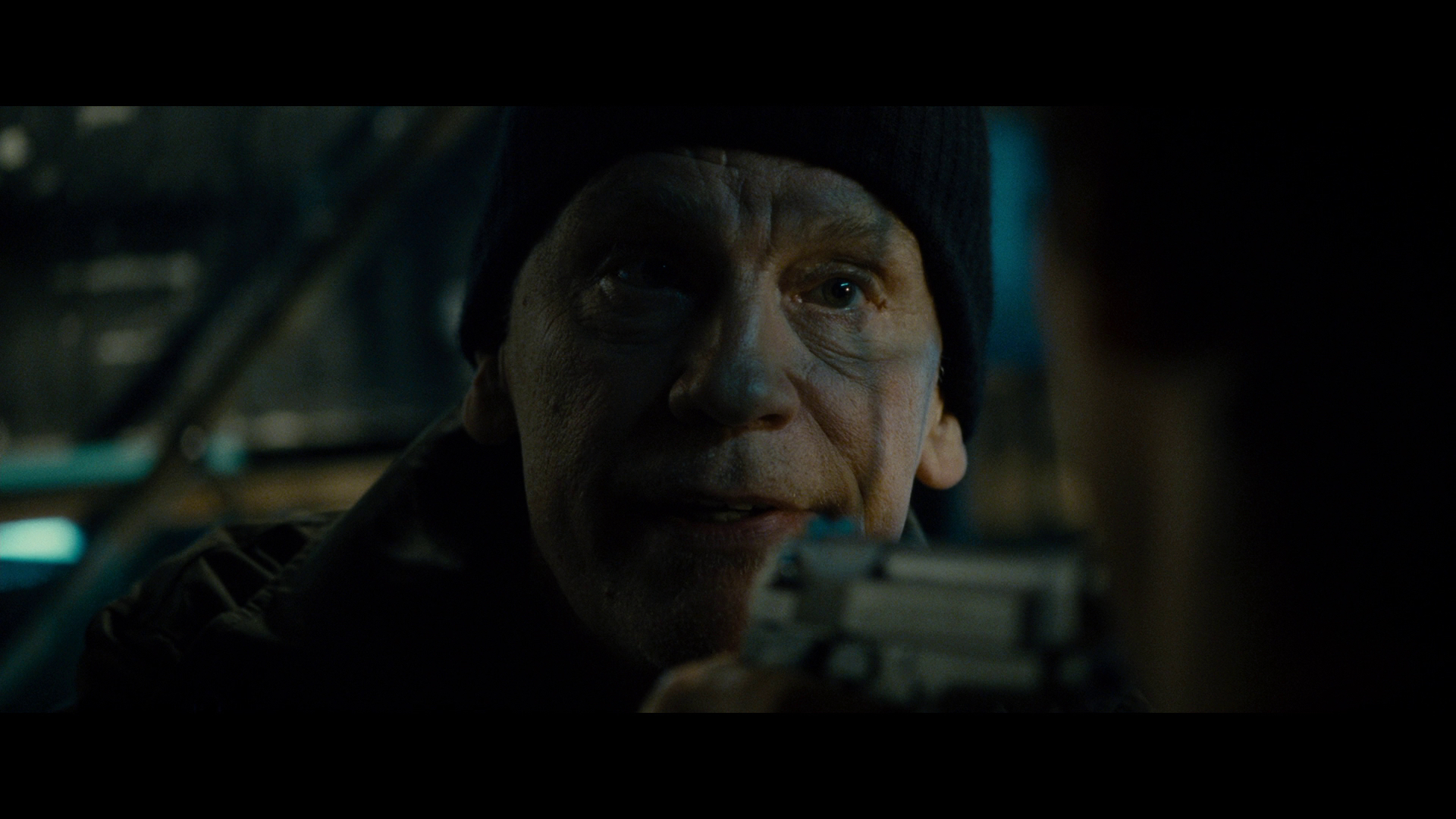 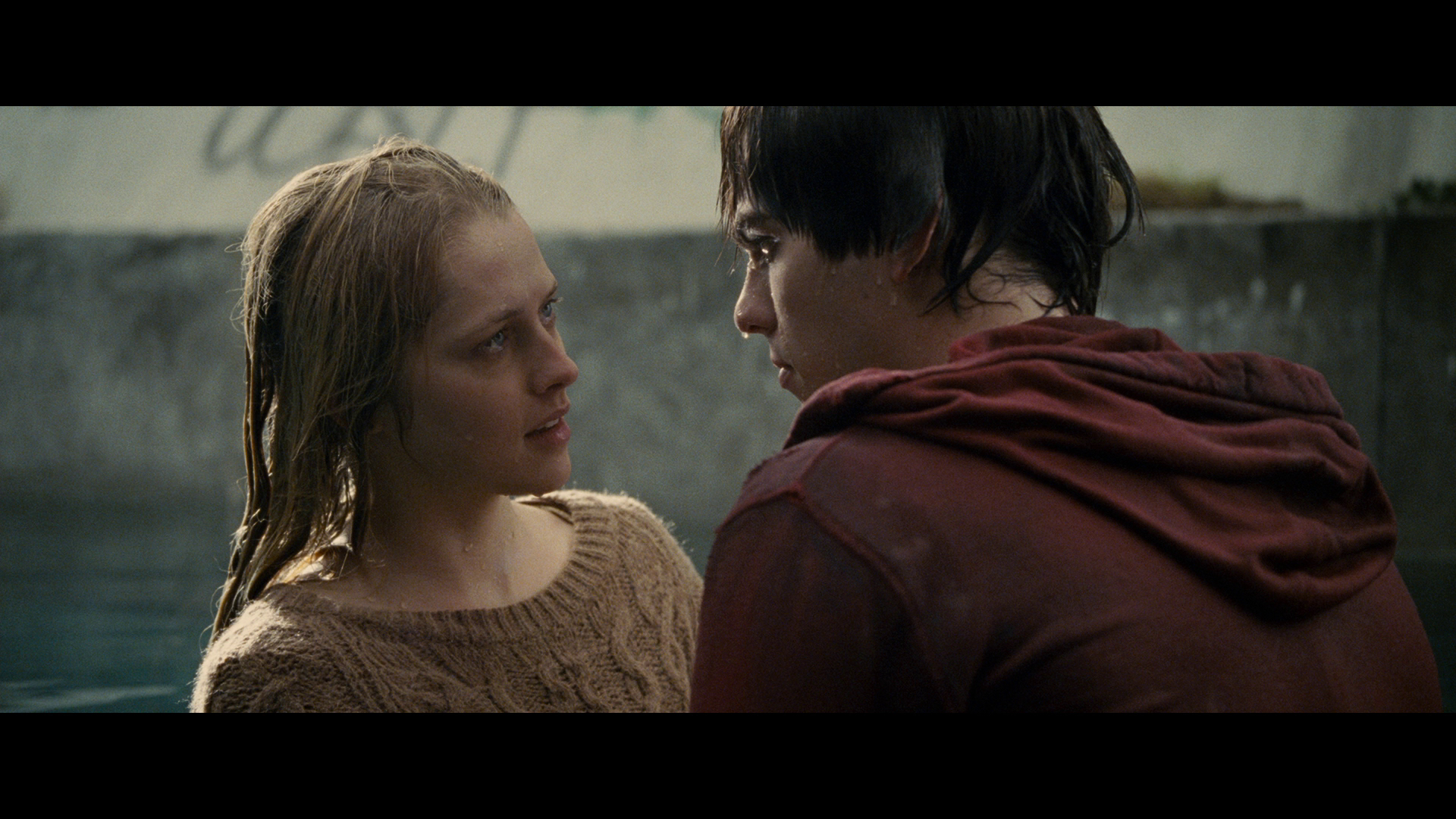