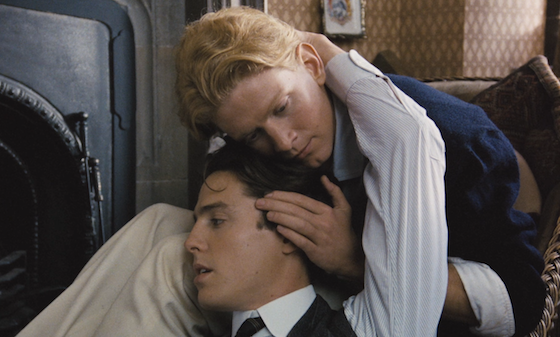 Maurice (1987) is the oft-forgotten middle installment of Merchant-Ivory's trilogy of E.M. Forster adaptations, bookended by A Room with a View (1985) and Howards End (1992). Now in a gorgeous 4K restoration, the Cohen Film Collection has revived this quiet gem of gay arthouse cinema. And, let's be honest, it's probably because it is an unabashedly gay film that we don't hear about it as often as we do those other two Forster films.

James Wilby, with floppy strawberry-blonde hair and the soft features of an innocent baby duck, is the middle-class title character, Maurice (pronounced "Morris") Hall. Mr. Hall has the bad fortune to be in love with his schoolmate in Edwardian England, a time and place where such feelings are literally considered criminal. Hugh Grant, seven years before his own floppy brown hair made an international breakthrough in Four Weddings and a Funeral, is Maurice's upper-class love, Clive Durham.

The early scenes of Maurice and Clive's budding relationship are giddy and sometimes intoxicating. They enthuse over pieces of music, roughhouse like small boys, and, in one of the film's most exquisitely charged moments, indulge in a little tender hair-stroking. When Clive admits his love for Maurice out loud, both young men are stumped for what to do. After an awkward delay, Maurice reciprocates, but then finds Clive suddenly hesitant to do anything more than snuggle. Clive claims that avoiding sex makes their relationship more special -- less base -- but it becomes the first indicator that Clive is maybe ruled too much by his head and not his heart.

From this point, the film sets its two lovers on two divergent paths. Clive is frightened by his feelings, and after seeing another upper-crust classmate, Lord Risley (Mark Tandy), publicly humiliated and sent to prison for being of "the Oscar Wilde sort," he forces himself to pursue a "normal," heterosexual life. Clive succeeds, to a degree, marrying a bright young woman of means named Anne (Phoebe Nicholls). Maurice is devastated, but figures that Clive must be correct. He consults with a doctor friend of the family (played with perfect stuffiness by Denholm Elliott) to "cure" him, but to no avail. He starts seeing an American hypnotist, played by a slyly knowing Ben Kingsley, who suggests Maurice might be better off moving to a more permissive country rather than trying to repress his natural feelings.

Maurice continues to beat himself up for his longing, until he is unexpectedly wooed by Alec Scudder (Rupert Graves), a strapping young gamekeeper who works for Clive's family. Maurice is smitten. Alec provides Maurice with all the passion and unguarded affection that he could never get from Clive. Their class difference gives Maurice pause, as well as significant reason to doubt their potential longevity as a couple, but one of the film's best attributes is the way that it rewards its main character for remaining true to himself. At the end of the film, Maurice has a potentially difficult road ahead of him, but it will no doubt be more rewarding than the sham life to which Clive is subjecting himself and poor Anne.

As one expects from a peak-era Merchant-Ivory film, the acting is uniformly superb. Wilby's performance is injected with youthful passion and ornamented with subtle grace notes, particularly as Maurice tries to navigate the murky waters of his desire. Grant, whose hesitance and vague neurosis is essentially his trademark, pulls off the tricky business of making the same type of skittish behavior seem charming in the film's early passages and downright grating as his character continues to build emotional walls between himself and Maurice. If anything, Grant becomes such an effective baddie that the film starts to drag in the middle, while we viewers wait for these two characters' emotional stalemate to resolve in some way. (At 140 minutes, the film feels a touch overlong.) Graves plays his working-class part with believable earthiness and sincerity -- and no noticeable seams showing.

Forster's novel was originally written in the mid-1910's but, due to concerns over its subject matter, it was not published until after his death, in 1971. The film version was released in a small window where the cultural temperature was such that producer Ismail Merchant and director James Ivory didn't face a major backlash -- but they didn't manage to score a Room with a View-sized hit either. Now, the culture has shifted enough that Maurice has the potential to resonate more effectively, with a wider audience, than it did upon release. And the film deserves it. 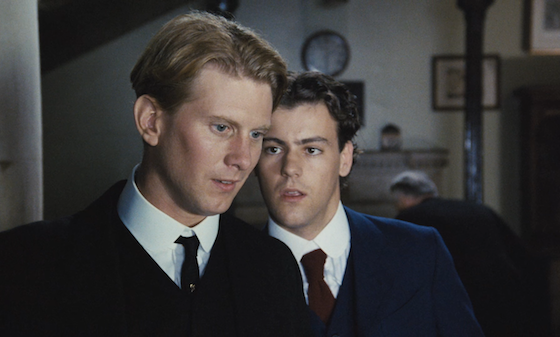 The Blu-ray
Maurice is presented in 2-disc set, with the feature on disc 1 and all the bonus features on disc 2. A color booklet, featuring stills, a note from director James Ivory, a new interview with actor James Wilby, and an essay by John Pym, is also included.

The Video:
Like Cohen's Howards End release last year, this AVC-encoded 1080p 1.66:1 presentation is sourced from a brand-new 4K restoration that is just jaw-dropping. Outstanding clarity and depth, with intricate fine detail reproduction and subtly nuanced color and contrast. The film is kept on a stand-alone disc, so that the bitrate is totally maxed-out, and there are no noticeable digital compression issues, with the film grain well-resolved.

The Audio:
The soundtrack is offered in two versions: a new DTS-HD MA 5.1 surround remix and the original LPCM 2.0 stereo mix. Both are clean and clear, with no noticeable defects. It's not a particularly "busy" movie, so the lush musical score by Richard Robbins gets the biggest upgrade in the remix. Both versions are full and supportive. One subtitle option: a slightly over-zealous English SDH track that mentions sound effects for actions very clearly taking place on screen.

(HD, 15:44) - A new conversation with the film's director and cinematographer, recorded in the Cohen Media Group offices. They discuss working together and the reasoning behind some of their creative choices. Ivory also touches on the English leads' lack of self-consciousness in appearing as gay characters, compared to the guarded way most straight American actors tend to deal with it.


Final Thoughts:
Maurice is the kind of film that just seems like it should be better known. It's a delicate story of forbidden romance between college chums, in an era where such feelings could easily lead to a prison sentence. But it's so well-crafted and so well-acted that it demands a larger audience. Cohen Film Collection's new A/V restoration is absolutely first-rate. Highly Recommended. 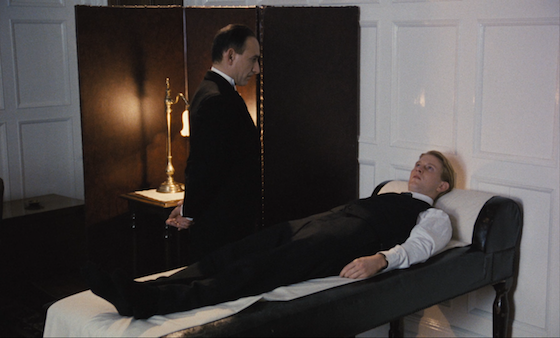