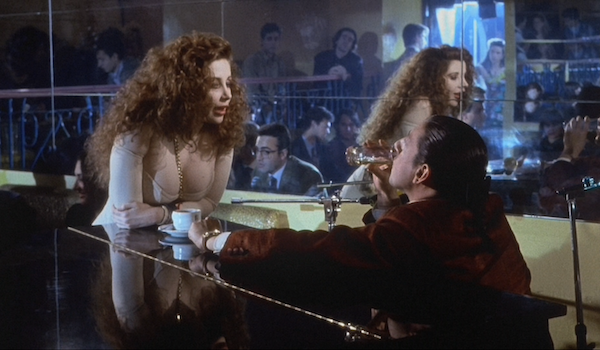 Director Marco Ferreri is known for provocative and absurd films like Dillinger Is Dead and La Grande Bouffe, so it comes as no surprise that his 1991 film The Flesh (La Carne) is very odd indeed. Like his better known work, The Flesh deals with the male appetite for food and sex -- and not subtly.

Sergio Castellitto stars as Paolo, a nightclub piano player whose chance encounter with the curvy and somewhat spacey Francesca (Francesca Dellera), leads to a bizarre, gluttonous, sex-filled, seaside excursion that stretches what should reasonably be a one-night stand into a life-demolishing six-month stand. Francesca is depressed after a recent abortion and doesn't seem to mind some decent sex and indulgent meals. Paolo is a caricature of a typical male, who will do anything to keep Francesca by his side and in his bed. His children and ex-wife show up for child support payments, but he's been seductively paralyzed by Francesca, and is too tired to get out of bed or hide his erection from his chuckling teen daughter. Later the cops come because they say Paolo's boss wants to know where he has been for months.

Ferreri has some satirical notions in mind, clearly, about the way men bully women into behaving a certain way for them, and about how they then can't handle it when women reveal some desires of their own. (Ferreri hints -- broadly -- that Francesca still wants to be a mother: she is constantly on the lookout for storks. However, if the audience still doesn't get it from this clue, he includes a scene where she nurses a stranger's baby.) But The Flesh lacks a sense of urgency. There are plenty of small laughs, some titillating sexy scenes, and two memorably unusual performances by the leads, yet this viewer was left shrugging once the end credits started to roll. This isn't a bad flick necessarily, just an inessential one. 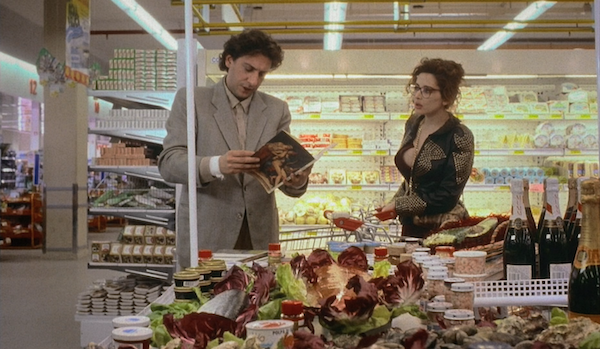 The Blu-ray
The Flesh comes in a Blu-ray/DVD combo set, with the same features on both discs. The Blu-ray is region free.

The Video:
The Flesh is presented indifferently in an AVC-encoded 1080p 1.72:1 transfer. There's HD-level detail, but there's a ton of grain and noise. Color is inconsistent. Sporadic dirt and damage. There are certain blank frames that are either tape drop-outs or instances where the projector/scanner missed engaging the sprocket holes and blurred past the image. I can't quite tell which. It's watchable, but it just looks like you're watching an OK print in a so-so movie theater.

The Audio:
The audio is similarly indifferent. There's a lossless Italian DTS-HD MA 5.1 surround mix, but it's pretty thin. There are a lot of interesting needle drops in the film, like a few tunes by Kate Bush, but the sound quality is that of a tiny tape deck playing in the corner of the room. There is also a lossy Italian Dolby 2.0 mix and a muffled, lossy Spanish Dolby 2.0 mix. Optional English subtitles, but, as in many kung fu movies, they appear to have been written by a non-native-English speaker.

(HD upscale, 5:13) - A few moments of Marco Ferreri being amusingly cranky on the set, as he directs some scenes.

Final Thoughts:
Fans of Marco Ferreri's dark, absurdist sensibility might find some enjoyment here. Certain passages are quite entertaining, and the whole enterprise is intriguingly strange. However, Ferreri explored this territory more memorably in his earlier flicks. If you're interested, I say Rent It. 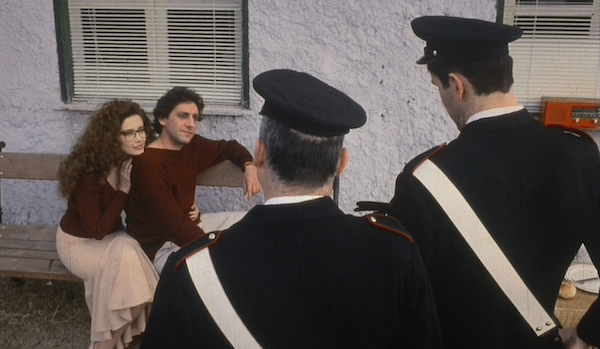