Return of the Ape Man

Olive Films // Unrated // October 31, 2017
List Price: $24.95 [Buy now and save at Amazon]
Review by Stuart Galbraith IV | posted November 16, 2017 | E-mail the Author
In the field of "Poverty Row" horrors, Return of the Ape Man (1944) is perhaps the most unwittingly amusing. Bela Lugosi and John Carradine star as bickering scientists who bring a galumphing caveman (Frank Moran) back from the dead in this 60-minute wonder.

Many Poverty Row horror films have fallen into the public domain and were staples of late-night local television for decades, later turning up on VHS and DVD. Return of the Ape Man was a bit more elusive, though the unrelated The Ape (1940), starring Boris Karloff, and The Ape Man (1943), with Lugosi, were readily available.

Lugosi's star had fallen precipitously since about 1934. By the early 1940s he was relegated to small, menial parts in bigger studio horror movies and horror spoofs, while headlining cheap Monogram programmers. The Devil Bat (1940), on Blu-ray, is immensely enjoyable for such a crummy movie, thanks to Lugosi's ripe performance. The Ape Man, also starring Lugosi, is even loonier, and Return of the Ape Man approaches that film's level of low-budget delirium.

British actor George Zucco is listed prominently in credits, but his appearance in Return of the Ape Man is one of the stranger and more arcane bits of Hollywood trivia. Zucco was scheduled to play the title creature. Stills exist of Zucco in makeup, but onscreen credits have him "sharing" the role with Frank Moran. A close examination of the film clearly shows Zucco in two shots from the same camera angle, thawed from his icy tomb awaiting to be revived. After a cutaway the guy on the slab, and for the remainder of the film, is Frank Moran. (Some of the props are in different locations, betraying the continuity.) Zucco's onscreen for maybe five seconds.

He left the film either for health reasons or maybe he simply didn't want to be associated with a movie this terrible and a part so demeaning, though he came pretty close in movies he made before and after this. Regardless, Monogram still billed him third in the credits and played up on his "appearance" in exaggerated publicity material. 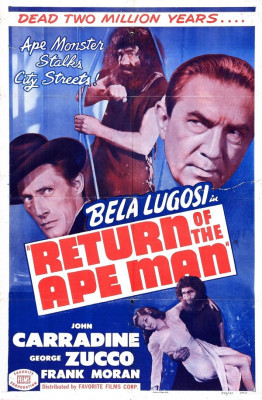 Professor Dexter (Lugosi) and his assistant, Professor John Gilmore (Carradine), revive a tramp they've kept frozen in Dexter's basement laboratory for the past four months. No worse for wear, the tramp (Ernie Adams), happy to receive a fiver from Gilmore, wanders off. Both are delighted by the experiment's success, but Dexter, rather than publishing his results in a scientific journal, insists they travel to the Arctic in search of a preserved prehistoric man.

In the Arctic, played by a single set with two "Eskimos" barely touching the ground with their picks, lest they damage the soundstage floor, Gilmore is ready to pack it in, but Dexter berates Gilmore's lack of total commitment. Providentially, a glacier cracks open and a prehistoric man encased in ice presents itself.

Back at the lab the creature is thawed and revived but is unable to communicate. Dexter believes the answer is to transplant a portion of a modern human brain into the ape-man's skull. This, of course, poses a slight problem.

At a party that evening, wild-eyed Dexter scopes out the party guests ("You know," he mutters, "some people's brains would never be missed!"), settling on Steve Rogers (Tod Andrews), the fiancé of Gilmore's niece, Anne (Teala Loring). Gilmore, concerned, follows Dexter and Steve back to Dexter's lab, where the mad scientist already has scalpel in hand. Gilmore pulls a gun and Dexter's plans are, temporarily, thwarted.

Later that evening, the ape-man escapes from his cage and kills a policeman before Dexter, conspicuously in formal attire and brandishing a lit blowtorch, manages to subdue the primitive. Reading about the murder in the morning newspaper, Gilmore immediately suspects Dexter's ape man, enters the lab but is paralyzed in Gilmore "electronic ray" (which looks like a doormat with wires attached) and falls victim to Dexter's brain transplant scheme.

The primary appeal of watching movies like Return of the Ape Man today is Lugosi. He's not as self-satisfied as he was showing off his latest aftershave formula (actually the kiss of death for victims of The Devil Bat), nor as pathetically silly and humorously whiny as he was in The Ape Man, but as one of his maddest of mad scientists, Lugosi undeniably entertains here with Dexter's sheer ruthlessness and determination.

Despite eyes more expressive than big Frank Moran, Zucco's thin frame and withered arm would not have made for a very threatening ape man, and it's impossible to imagine the nearly 60-year-old actor carrying Anne around like a ragdoll during the protracted, endlessly repetitive climax. (His ape man brain with a dash of Gilmore provides him with enough intelligence that he's able to play Moonlight Sonata at the piano, yet not enough to speak in complete sentences. Go figure.) The piano-playing monster bit was reworked in the equally funny The Alligator People (1959), while this film's climax seems inspired by an earlier film, also with Lugosi, Murders in the Rue Morgue (1932).

Olive Films' Return of the Ape Man does not look good. There's been a lot of speculation on its source, some swearing it's derived from a 16mm print, but in the end it's basically a good transfer of very poor, dupey film elements. While lacking the amateur qualities of many public domain label video transfers, the source elements, whether 35mm or 16mm, are several, perhaps many generations removed from the original camera negative. The image is soft with poor contrast and shows signs of damage from whatever it was printed from, but the image is still watchable, if barely so. The mono audio, supplemented with optional English subtitles, is similarly substandard. While one can't really fault licensor Paramount, who probably had access to nothing better, something this lousy looking (not to mention short, just 60 minutes) probably shouldn't carry a suggested retail price of $24.95. Fans of such pictures likely would have been satisfied were this paired with a similar Poverty Row horror, but for what it is, it's overpriced. And no Extra Features besides.

Definitely not for everyone, but a must for fans of this often amusing sub-genre of classic horror. Recommended.