Kino // Unrated // December 5, 2017
List Price: $29.95 [Buy now and save at Amazon]
Review by Stuart Galbraith IV | posted December 7, 2017 | E-mail the Author
For mystery fans, Maigret Sets a Trap (Maigret tend un piège, 1958) exceeds expectations. A French-Italian co-production, the film is handsomely made, features good performances, and perhaps most importantly is far franker and more explicit about the sexual aspects contained in the story than would ever passed Hollywood's Production Code at the time. In that sense the film hardly seems dated at all, and overall compares favorably to the very best murder mysteries made for British television in recent years.

Iconic French star Jean Gabin plays Police Inspector Maigret. In his later postwar films, movie roles seem to adjust to Gabin's screen persona rather than the other way around, his chiseled stone-like features becoming a kind of French monument. This inflexibility made him a pretty terrible Jean Valjean later that year in the big budget adaptation of Les Misérables, but these qualities work in his favor as Maigret.

Georges Simenon wrote 76 Maigret novels and another 28 short stories between 1931 and 1972, with the earliest film adaptation, Night in the Crossroads, directed by Jean Renoir in 1932 and starring his brother Pierre as the famous commissaire of Paris's Brigade Criminelle. The first English-speaking Maigret was Charles Laughton, in The Man on the Eiffel Tower (1950), directed by co-star Burgess Meredith, Laughton, and Irving Allen. The character proved even more popular on television, with adaptations made in the Soviet Union, Austria, Italy, Japan and, of course, France, where Jean Richard played him from 1967 to 1990.

In Britain Rupert Davies played Maigret for many years and, all too briefly, Michael Gambon essayed the character for two series (seasons) in 1992-93. In a startling casting move, comedian Rowan Atkinson picked up the role for ITV in 2016. I've not yet seen it but reportedly he's quite good. 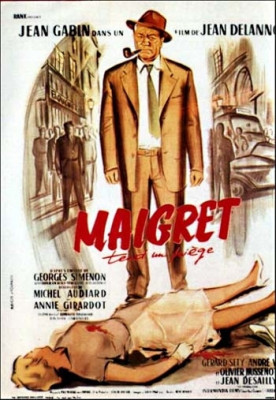 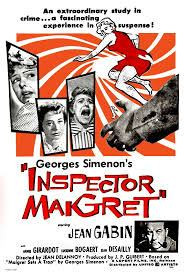 A serial killer of middle-aged, full-figured brunettes terrorizes the Parisian artist-nightclub enclave of Montmarte. The murderer eludes the police after claiming his (or her) latest victim, but clues suggest the killer accessed the butcher shop of Emile Barberot (Alfred Adam) and used one of his boning knives for the deed. He's brought in for questioning but Maigret (Gabin) believes him innocent. Another suspect is arrested and paraded before the press, but he's actually a plant installed by Maigret to draw the killer, whom writes to le commissaire personally, out in the open.

(Spoilers) After a failed sting operation using policewomen as bait, more clues lead Maigret to question Marcel and Yvonne Maurin (Jean Desailly and Annie Girardot), the son and daughter-in-law of the building's owner, widower Adèle Maurin (Lucienne Bogaert). Yvonne has been involved with gigolo George "Jojo" Vacher (Gérard Séty), operating out of a seedy apartment nearby, and both women appear overly protective of Marcel, a former child prodigy with man-child emotional problems.

Director Jean Delannoy is best known outside of France for lesser works like his 1957 remake of The Hunchback of Notre Dame but in France he is most remembered for his film noir, a category in which his two Maigrets fall. The look is more police procedural than stylized noir, but the atmosphere of 1950s Paris oozes from every scene. The main streets and alleys seem to be a mixture of real locations, soundstage exteriors and backlot streets, but it's all integrated well. Moreover, there's an effortless authenticity to the atmosphere, the movie being made just three years after the novel was published, that present day Maigret versions must recreate as period pieces.

Delannoy also gets excellent performances from the entire cast. Gabin isn't particularly distinctive as Maigret, but he's a good fit, looking and acting the part. That same year he played another police inspector in The Night Affair (Le désordre et la nuit ); without having seen it, I have little doubt he played that role more or less in the same manner.

The real standout is Jean Desailly, so memorable as the cheating husband in Truffaut's The Soft Skin (1964); his work in Maigret Sets a Trap earned him a well-deserved BAFTA nomination as Best Foreign Actor that year. In a difficult role, Desailly expresses mental illness with clinical verisimilitude, and his evasiveness when questioned by Gabin is highly suspenseful. The movie impressively builds steam throughout, even when the identity of the killer(s) becomes obvious. Annie Girardot (Rocco and His Brothers) is nearly as good as his conflicted wife, while Lucienne Bogaert is fine as his protective mother.

French star Lino Ventura is prominently billed on the disc's packaging, but in actuality he's billed way, way down on the cast list and his role as an inspector on Maigret's team is limited to probably no more than five or six lines and three or four minutes of screentime.

Kino Classics presents Maigret Sets a Trap (previously released in America as Inspector Maigret and, of all silly things, Woman-Bait) in its orginal 1.37:1 standard screen shape. (The next Gain-Maigret was 1.66:1 widescreen.) The black-and-white film looks great, nearly flawless, and the 2.0 DTS-HD Master Audio mono is clean and clear. The subtitles are excellent and the disc is region "A" encoded. No Extra Features apart from trailers for both titles.