Maigret and the St. Fiarce Case

Kino // Unrated // December 5, 2017
List Price: $24.95 [Buy now and save at Amazon]
Review by Stuart Galbraith IV | posted December 9, 2017 | E-mail the Author
A follow-up to Maigret Sets a Trap (Maigret tend un piège, 1958), Maigret and the St. Fiacre Case (Maigret et l'Affaire Saint-Fiacre, 1959) isn't quite up to the level of its predecessor, but it's still a fine mystery and nicely visually contrasts the earlier picture. Maigret Sets a Trap took place mostly at night, in the densely urban Parisian enclave of Montmarte. Maigret and the St. Fiacre Case is set in the country, with most of the action in broad daylight. French film icon Jean Gabin again stars.

As noted in my earlier review of Maigret Sets a Trap, Georges Simenon wrote 76 Maigret novels and another 28 short stories between 1931 and 1972, with the earliest film adaptation, Night in the Crossroads, directed by Jean Renoir in 1932 and starring his brother Pierre as the famous commissaire of Paris's Brigade Criminelle. The first English-speaking Maigret was Charles Laughton, in The Man on the Eiffel Tower (1950), directed by co-star Burgess Meredith, Laughton, and Irving Allen. The character proved even more popular on television, with adaptations made in the Soviet Union, Austria, Italy, Japan and, of course, France, where Jean Richard played him from 1967 to 1990.

In Britain Rupert Davies played Maigret for many years and, all too briefly, Michael Gambon essayed the character for two series (seasons) in 1992-93. In a startling casting move, comedian Rowan Atkinson picked up the role for ITV in 2016. I've not yet seen it but reportedly he's quite good.

Jean Gabin returned to the character in one final film, Maigret Sees Red (Maigret voit rougue, 1963), but that was made by different production companies. Hopefully these will sell and Kino will acquire home video rights to that third film, too. 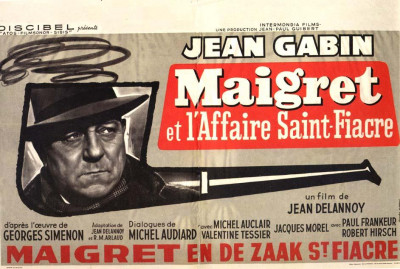 Police Inspector Maigret (Gabin) returns to the rural village he left as a teenager at the request of widowed Countess de Saint-Fiacre (Valentine Tessier). She's concerned about an anonymous letter she's received, claiming that she will die on Ash Wednesday, the day following Maigret's arrival.

The two are old friends and, in a charming scene, joke about how Maigret, as a lovesick teenager, would douse himself with cologne, hoping to impress her. Maigret's late father had been the estate manager for the family and during his youth he played at their château. He's therefore shocked and dismayed to find the sorry state that the palatial château is in now. Riddled with debt owing to her alcoholic playboy son's extravagant lifestyle, she's been forced to systematically sell off the contents of the château and the surrounding land, leaving many rooms picked clean of their treasures and mementos.

(Spoilers) The following morning the countess does indeed die, collapsing in her pew at church during mass, shortly after receiving the sacrament. The local doctor, Bouchardon (Paul Frankeur), is quick to rule the already sickly countess's death natural causes, a heart attack. But then Maigret discovers a newspaper headline announcing the death of countess's son, Maurice, by suicide in Paris. The story turns out to be false as the very much alive count (Michel Auclair) arrives at the château soon after. Maigret contacts the paper, learning that the story was reported at the last-minute by their Paris bureau with no time to have it properly vetted. But if the countess died of shock upon learning the false news, how could she have received it so early that morning?

Maigret and the St. Fiacre Case is excellent in its first half, tracing the detective's wistful return to a childhood home he left decades ago, before the first World War. Though married (Maigret's wife has a small but significant role in Maigret Sets a Trap but does not appear here), his protectiveness toward the countess, whom he loved as a teenager, is sweetly done. Later, there's another charming scene where Maigret visits the village general store, where its old lady owner (Gabrielle Fontan, 86 at the time of filming), is delighted to reunite with Maigret, whom she's not seen since he was a boy.

The locations, which the IMDb reports include Courquetaine, Sein-et-Marne for the château, and Gaillon-sur-Montcient and Vernon, are attractive while suggesting the kind of decaying, gossipy community reminiscent of Sherlock Holmes oft-quoted "You look at these scattered houses, and you are impressed by their beauty. I look at them, and the only thought which comes to me is a feeling of their isolation and of the impunity with which crime may be committed there…They always fill me with a certain horror. It is my belief, Watson, founded upon my experience, that the lowest and vilest alleys in London do not present a more dreadful record of sin than does the smiling and beautiful countryside."

The cast is good though no one particularly stands out. Other than Gabin, Jacques Marin is probably the most recognizable face to American viewers, he having appeared in numerous English-language productions filmed in France, most memorably playing a police inspector himself in Stanley Donen's Charade (1963).

The Blu-ray of Maigret Sets a Trap is in its original 1.37:1 standard screen shape, while this is in its correctly framed OAR of 1.66:1. Both are in black-and-white and each looks great, nearly flawless, while the 2.0 DTS-HD Master Audio mono is clean and clear. The subtitles are excellent and the disc is region "A" encoded. No Extra Features apart from trailers for both titles.

A charming if less perfect companion to Maigret Sets a Trap, Maigret and the St. Fiacre Case is Highly Recommended.