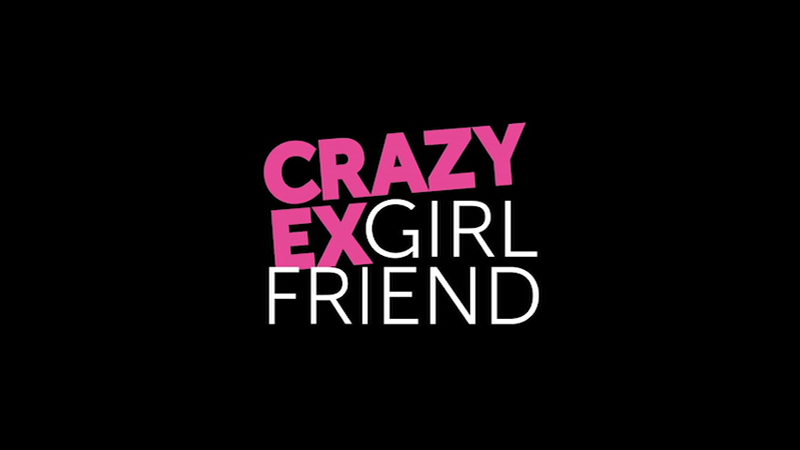 
The Story So Far...
Rebecca Bunch (Rachel Bloom) saw her camp crush Josh Chan (Vincent Rodriguez III) on the streets of New York one day, and it was enough to prompt her to ditch her high-paying job as an attorney and fly across the country to re-settle in West Covina, California...which just so happened to be where Josh lives--with his yoga-teaching girlfriend Valencia (Gabrielle Ruiz.) Rebecca set down roots in this small city--much to the chagrin of her domineering mother--getting a new job and new friends, but the real prize would be the heart of Josh Chan, a goal she schemed her way toward with the assistance of her friend/co-worker/mother-figure Paula (Donna Lynne Champlin.) The first season of Crazy Ex-Girlfriend was released on DVD by Warner Archives in September 2016, and DVDTalk has a review.

The Show
So, after all of Rebecca's scheming, screw-ups and sociopathic behavior earned her a spot in Josh's heart at the end of season one, what was the plan for season two? Well, just because she hooked Josh away from Valencia (and left her second-choice Greg (Santino Fontana) an even more broken man), doesn't mean holding on to him is going to be an easy task. And there's also the question of whether an actual, realistic relationship with Josh is actually what she wants, or was the fantasy and the chase the real thrill?

This conflict is the core of the second season, as Rebecca's mental state makes a relationship with Josh a struggle, and also sees her pinball back to Greg the second things start to get tough with her goal beau, repeating the love triangle that powered Season One. The thing is, Greg is a different person now, which further complicates matters, leaving Rebecca with the real possibility of going from two suitors to none at all, and a desperate Rebecca is a recipe for comedy.

Greg's not the only one who's changed, and not the only one pulling away from Rebecca. Paula has come to realize she wants different things in life, including a career in law, and adding that to her responsibilities as a wife and mother means she can't spend the time she's spent capering with her gal pal. Worse yet, paula's new plans--and the personal complications that threaten to undo her dreams--put her in conflict with Rebecca, putting their friendship at risk, leading Rebecca to seek comfort in another: Valencia. The oil-and-water pairing--combined with the ever-curious Heather (Vella Lovell) as the third part of their girl-group--adds a new dynamic that is surprisingly endearing.

Changes are all around this season, even at Rebecca's office, where her boss Darryl (Pete Gardner) has sold control of the firm to Type-A personality Nathaniel (Scott Michael Foster) and his family, shaking Rebecca loose from her comfort zone, challenging her and even giving her another potential love interest--despite her severe personal misgivings. Essentially there is no safe space for Rebecca anymore, whether physically or in terms of a relationship, and pushed to the brink, she responds in a big, big way. (The office is also where we meet new employee Maya (Esther Povitsky) who joins forces [in a way] with Darryl to provide plenty of low-key laughs.) 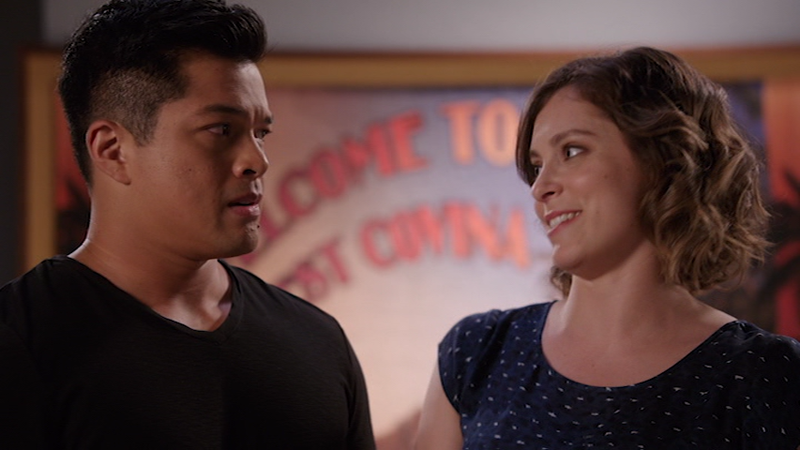 While Rebecca is and always will be the focus of the show--as it should be considering the title--Paula once again gets a healthy slice of the spotlight, giving the star of the show a run for her money for the title of the series' heroine. If there's anyone the audience is going to feel for and pull for, it's Paula, as she's the most human, she's the most put-upon and she gets the songs that really connect, like "Maybe This Dream" or her duet with Rebecca "You Go First." No character gives more of themselves and gets back less than Paula. One one character can challenge her in terms of likability, and David Hull's White Josh doesn't get nearly as much screen time (even if he tends to steal scenes when he appears.)

While this season raises the stakes for Rebecca, introduces or expands roles for several fun characters, and takes the story in an enjoyable direction, the music just doesn't match the quality of the first season's. There are a few catchy and/or clever tunes--like "Love Kernels", "The Math of Love Triangles" and "We Tapped That Ass"--but only a few can touch the pitch-perfect combo of humor and musicality that the first season seemed to achieve so easily. Foster's "Let's Have Intercourse" is a dead-ringer for a ‘90s singer-songwriter ballad, Bloom's "So Maternal" is a spot-on Bruno Mars tune and the epic Patti LuPone/Tovah Feldshuh duet "Remember That We Suffered" is the best tale of the Jewish people never to have been sung on Broadway. But on the whole, this season's musical segments sharply pale in comparison. 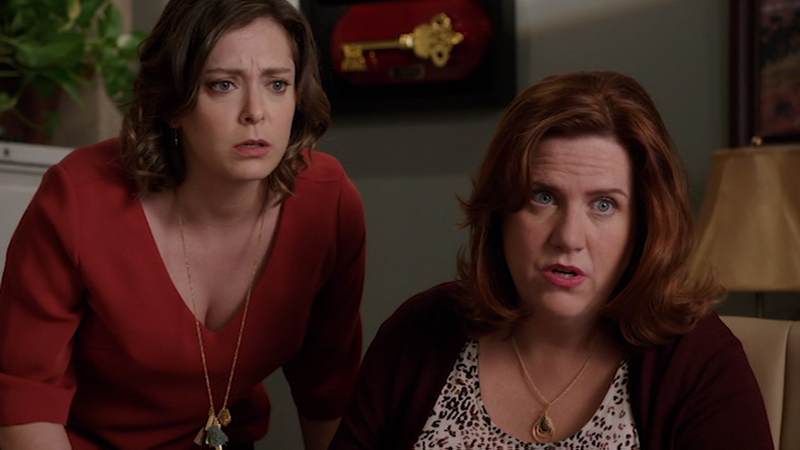 The Discs
The 13 episodes of the second season of Crazy Ex-Girlfriend are delivered on three manufactured-on-demand DVDs, which are packed in a clear standard-width keepcase with a dual-hubbed tray. The static, anamorphic-widescreen menus have options to play all the episodes and select shows. There are no audio options and no subtitles.

The Quality
Like last time out, the standard-definition, anamorphic-widescreen 1.78:1 transfers on these discs are solid, if certainly short of the original HD broadcasts. There's excellent saturation and appropriate skin tones, while the level of fine detail remains quite high, ensuring the show's production value makes it to the screen. There are no obvious issues with digital distractions, making for an appealing viewing experience.

The Dolby Digital 5.1 tracks remain most notable for the series' many musical numbers, with the surround channels providing the power for the songs, while the low-end makes its presence known when the moment makes sense. Voices are clear and free of distortion, with appropriate prioritization to ensure they are heard correctly. The side and rear speakers offer up some atmospheric effects to flesh out the soundstage. The result is a good, if not great sound.

The Extras
The first season offered nothing in terms of extras, but Warner Archive has retroactively made up for it by offering a commentary track for the show's first episode here (with the episode helpfully included.) Bloom and show co-creator/executive producer Aline Brosh McKenna sit down to share plenty of behind-the-scenes details on this censored-for-expletives track, including a healthy amount of info about the differences from the original pilot for Showtime and the edits that had to be made. As someone who was unaware of the show's production journey, this track was quite interesting and informative, and if you enjoy Rebecca's personality--surprise--Bloom isn't too far removed.

The two return for a second track, this time on the second-season's premiere episode, where they provide a ton of production details, along with some discussion on their philosophy on "previously on" segments. Between the two tracks, there's not a lot about the show that isn't covered.

A 6:10 second-season gag reel features a load of flubs and screw-ups, and a surprising focus on Bloom's bodily fluids. There's also a quartet of deleted scenes--one from season one, and three from this season--running a combined 3:09. Nothing is particularly revelatory, but there is a fun moment between Rebecca and Josh's parents. 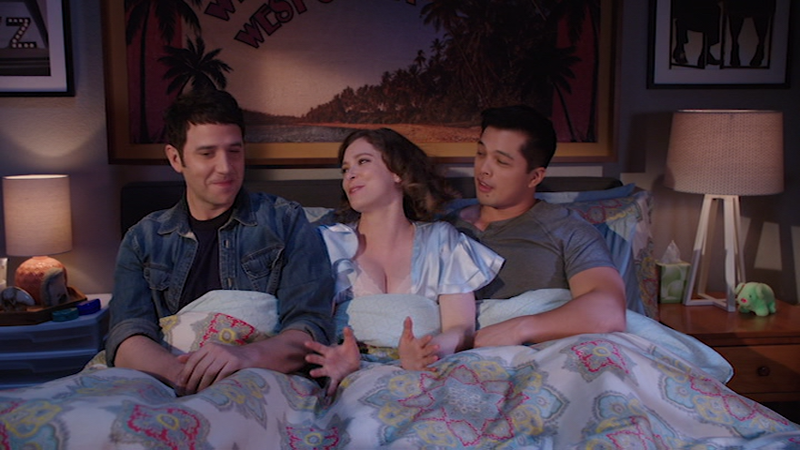 The Bottom Line
There's no doubt that Rebecca's world gets caught up in loops, as she cycles through boyfriends and gets caught up in lies and schemes, but there's growth to be found as well, usually in those who are sucked into her orbit. That's a big part of this season, as she deals with the repercussions of the her first-season shenanigans and how they have affected her friends (and continue to affect them.) It all serves to set up a very different third season. This set looks and sounds as good as the previous (even if the music isn't as great), but Warner Archive has gone the extra mile to provide fans with a couple of extras to enjoy (going back to season one), making it more worth your dime to add these episodes to your collection.