Kino // Unrated // December 19, 2017
List Price: $29.95 [Buy now and save at Amazon]
Review by Stuart Galbraith IV | posted December 31, 2017 | E-mail the Author
Based on a novel by early Western fiction writer Eugene Manlove Rhodes (1869-1934), Four Faces West (1948) makes ideal use of its stars, Joel McCrea and real-life wife Frances Dee, in a uniquely suspenseful, sweetly romantic film. It's as much a romantic drama-moral dilemma story as a Western, and in many respects it anticipates Sam Peckinpah's great Ride the High Country (1962), also starring McCrea in a similar role. It was not a success when it was new and usually isn't listed among the all-time great Westerns, but it's in that class and deserves to be better known.

Originally released by United Artists, at the time a distributor of mostly smaller independent productions to lesser theaters, rights to the film changed hands several times. MGM had it for a while (their logo appears on reissue credits here), and something called Favorite Attractions reissued it in the 1950s. Artisan issued a blah DVD version some years ago, and today it's controlled by Paramount. Kino's Blu-ray looks great. 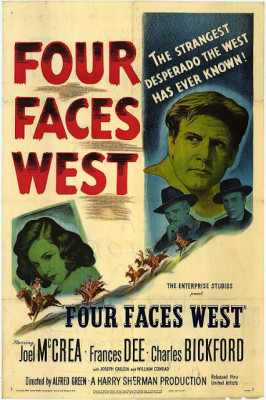 While the citizens of Santa Maria, New Mexico, herald the arrival of celebrated lawman Pat Garrett (Charles Bickford), he having recently shot outlaw Billy the Kid, just yards away Ross McEwen (Joel McCrea) quietly rides into town and robs the local bank of $2,000, leaving an I.O.U. and signing it "Jefferson Davis."

The outraged banker, Frenger (John Parris), offers a $3,000 reward for McEwen's capture - dead or alive. A rattlesnake bites McEwen in the desert, and he jumps aboard a train bound for Albuquerque. On board he's treated by Fay Hollister (Frances Dee), a middle-aged, unmarried nurse, and quietly observed by Monte Marquez (Joseph Calleia), a subtly shady gambler and businessman.

With the law hot on his trail, McEwen's problems are compounded when the train tracks ahead are washed away and he and others are forced to proceed aboard a slow-moving buckboard taking a lengthy detour. Also compounding matters is that McEwen and Hollister are falling in love.

Four Faces West works as marvelously well as it does because of the casting. As an actor, Joel McCrea had a limited range, but within that range he was often superb, particularly in comedies and Westerns. Like Gary Cooper he was incredibly handsome early in his career, and as he got older exuded an innate basic decency (even better than Cooper, in this writer's opinion). Clearly, McEwen is no career outlaw. Though his motive for the robbery is never entirely explained, it's clear the money is intended for a never-seen father, presumably back east someplace, perhaps ill. McEwen's I.O.U. is sincere even if his signature is not; he pays back some of the money over the course of the story.

McEwen's calm, casually executed robbery and frequent ingenuity in eluding capture (incredibly, at one point he saddles a bull and rides it across the desert) mask the largely unstated moral conflict that haunts him throughout the story. He knows he's broken the law but is prepared to live on the run, fearing both the massive numbers of cowhands and the like eager to bag that $3,000, or face a long prison sentence if he's captured alive. The movie audience is completely on McEwen's side; more than most Western heroes, we don't want anything bad to happen to him.

Once it becomes clear that Hollister won't leave his side, either, the emotional stakes are raised even higher. What if this lonely woman is shot trying to help this her lover escape? We really don't want anything bad to happen to her, either. Frances Dee had been one of the most beautiful women in an early 1930s Hollywood choking with beautiful women. By 1948, Dee was pushing 40 and, while still attractive, Dee was also middle-aged and the mother of three teenagers. Here she resembles a younger Irene Tedrow, the fine character actress who specialized playing matronly roles. Rather than the profoundly attractive couple they'd been in the early 1930s (they married in 1933), in Four Faces West they look like next-door neighbors, a Mom and Dad who love one another very much.

Some reviewers have described the film as a "faith Western," but it completely lacks the overt religious symbolism of movies like John Ford's 3 Godfathers (1948). Rather, the crux of the conflict, mostly internal, is whether McEwen can avoid capture long enough to work through his moral dilemma to an acceptable resolution. A less moral man with his smarts would simply slip into Mexico, never to be seen again, but for McEwen it's not that simple.

Hollister and Marquez realize early on that McEwen is a wanted man but dance around the problem, never pressing the circumspect bank robber for details. The casting of Calleia makes us wonder whether he's biding his time to gun down McEwen and collect the bounty for himself. She eventually urges McEwen to turn himself in but is in no way sanctimonious about it, while gradually it appears Marquez actually wants to help McEwen escape. Yet throughout imminent capture is around every corner. The screenplay makes good use of a particularly obnoxious little boy who several times threatens to expose McEwen. As Westerns go few are more suspenseful.

Into the mix and, presumably the "Fourth Face" after McEwen, Hollister, and Marquez of the otherwise meaningless title, is Pat Garrett. Respected actor Bickford (Johnny Belinda, the 1954 A Star Is Born) was twice as old as Pat Garrett was at the time (barely 30 when he shot Billy the Kid), but is nonetheless well cast. Bickford's Garrett withholds judgment on McEwen when clues suggest he's no ordinary outlaw, a contrast to Frenger, who wants to send a clear message to anyone else who might think his bank is easy pickings.

To its credit, Four Faces West offers no easy solutions and the ending isn't the cop-out it might have been in lesser hands. McCrea sells the difficult consequences of whatever choice he might make, and McCrea makes the route he finally chooses entirely believable and even heroic. One scene in the film exemplifies this beautifully: McEwen, seated, has been sifting the sulfur from his bullets to use as medicine for a family stricken with diphtheria. What about the bullets already loaded in his pistol? If he uses those he'll effectively be defenseless. McCrea here is so good grappling with this question that his acting is invisible, and the audience feels the agony of his choice.

(Mild Spoiler) The unusualness, perhaps even uniqueness of Four Faces West is pointed out in colleague Cinesavant's review, he noting that this may be the only Western in which not a single shot is fired during the entire film.

Extras are limited to trailers for other Kino-distributed Westerns.

A great humanist Western, genuinely romantic and in its own way incredibly suspenseful, Four Faces West is a DVD Talk Collector Series title.