Kino // Unrated // December 12, 2017
List Price: $24.95 [Buy now and save at Amazon]
Review by Stuart Galbraith IV | posted December 31, 2017 | E-mail the Author
Back in 2011, I reviewed a DVD boxed set of Bob Hope comedies from Shout! Factory that included six of Bob's best (Son of Paleface) and worst (The Private Navy of Sgt. O'Farrell) movies. Apparently owned and managed by Hope's estate (currently via Fremantle Media), this mash-up also included one of his best and more unusual later-career features, Paris Holiday (1958). Lavishly appointed, the film was shot entirely in France and co-stars (with more or less equal billing) beloved French comedian Fernandel, while featuring the great American film director Preston Sturges in a small but delightful role.

The DVD version was 16:9 enhanced but was pretty tepid-looking, considering that the picture was among the first photographed in Technirama, the large-frame negative process that was basically VistaVision with CinemaScope-like anamorphic theatrical prints. 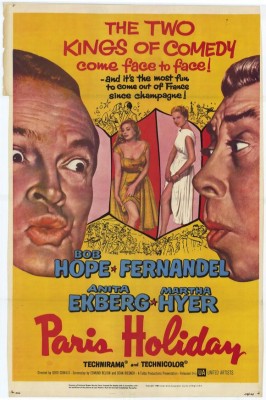 "Do you know it's mating season for shellfish? Maybe the lobsters are having a hayride tonight!"

Hunter is en route to Paris hoping to secure the American rights to the latest play by Serge Vitry (Preston Sturges), in which Hunter wants to star. However, Vitry's play is in fact a veiled exposé about a real-life counterfeiting ring whose leaders are at the highest levels of the French government. Zara and others, believing Hunter has a copy of the play, or something, are out to assassinate him, and when that doesn't work they try to have him committed to an insane asylum. (A doctor reassures him, "We have many actors here. Especially since television.")

The idea of putting America's and France's most-popular comedians together in the same movie is pretty irresistible. Their comic styles aren't really compatible, but someone had the good sense to let each comedian do his own thing and they seem to be enjoying each other's clowning when they're together. When they first meet, Fernandel admires Hope's famous ski-slope nose to which Hope responds, "And that's comin' straight from the horse's mouth!" a reference to Fernandel's trademark: equestrian-like choppers. In one scene Fernandel even briefly disguises himself as a priest, a reference to his famous Don Camillo character and films.

Fernandel's 40-year movie career, from 1930-70 (he died in 1971) nearly mirrored Hope's. He attracted attention in the all-star Hollywood roadshow and Best Picture winner Around the World in 80 Days (1956) as star David Niven's coachman, but like Niven's co-star, Mexican comedian Cantinflas, Fernandel's stateside fame was short-lived. Several of the Don Camillo movies were released to DVD a number of years ago, but they didn't spark a Fernandel revival.

The movie wisely elicits most of Fernandel's laughs through pantomime or through Hunter's inability to understand Fernandel's French, rather than saddle him with Bing Crosby-type wisecracks as Hope's expense.

The great comedy writer-director Preston Sturges made short gag appearances in a few movies but this, his last film credit in any capacity, was his only real movie role, a small but pivotal part. He was only in his late-50s but looks tired and a good 15 years older at least, but his appearance is still almost touching, as is Hope's admiringly delivered line "I've seen most of your comedies."

Filmed in Technirama, as its title suggests Paris Holiday has a strong travelogue-type appeal. The footage in Paris really glamorizes the city well, much like Stanley Donen's Funny Face, which was shot there (in VistaVision) at about the same time. The footage set aboard the SS Île de France is likewise lush and exotic. (The ship was decommissioned soon after filming but used one last time, for the exciting disaster film The Last Voyage in 1960.) Apparently the picture was made entirely in France - some of the shipboard and later hotel scenes were done at a studio on sets, but the art direction is so good it's often impossible to tell what's a set and what's a real on-location interior.

The picture has several big comic set pieces, including an elaborate car and helicopter chase at the end featuring some incredible stunt work. But the biggest laugh may be the casting of British-born André Morell as an American ambassador, whose American accent is one of the most surreal ever attempted.

Technirama used standard 35mm film that ran through the camera horizontally rather than vertically, thus producing an image roughly eight perforations wide rather than four perfs highs, Technirama adding a slight anamorphic squeeze to produce a CinemaScope-shaped picture. This essentially provided an image twice as sharp as regular CinemaScope and much less grainy. Blu-rays sourcing original Technirama negatives can look superb, and while the Blu-ray of Paris Holiday is a big step up from the DVD, it's still a bit disappointing, lacking the full clarity Technirama allowed. The film elements show signs of damage and age-related wear, and the color is a little off, all this suggesting most likely a 4-perf reduction element was used for the transfer. The mono audio is also a bit erratic and rather tinny at times.

Kino's Blu-ray of Paris Holiday offers what may be a record for Least Extra Features while still technically offering something. Included is a single page reproduction of a shampoo advertisement featuring Ekberg, a vague tie-in with the movie. A-n-n-n-n-n-n-d that's all, folks!

Enjoyable with an okay but not great transfer, Paris Holiday is Recommended.