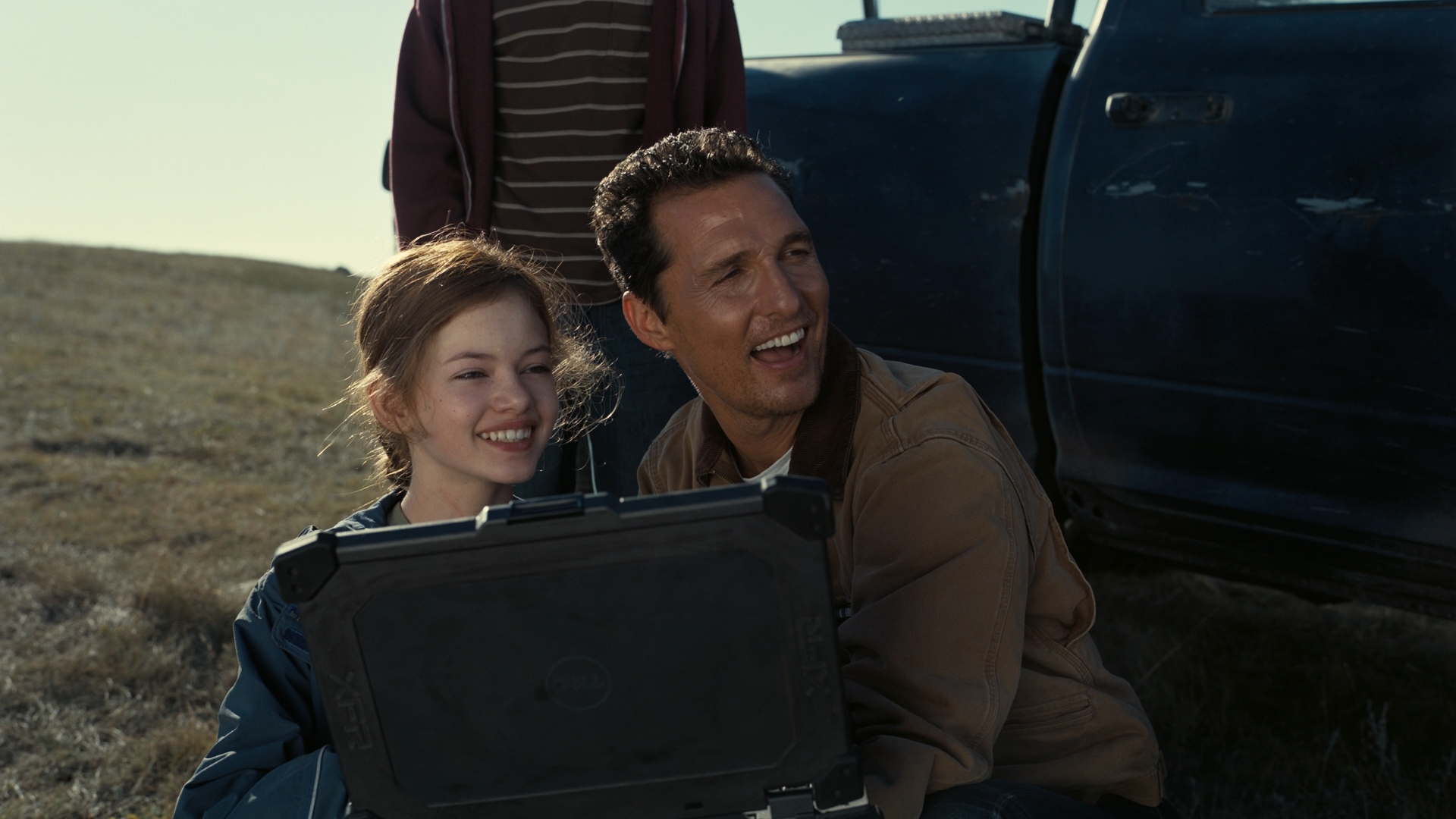 So few studio movies come along these days that are truly original (if they're not sequels or reboots, most of the time they're based on books), when one does we sometimes never give it the credit it deserves. Because of its hefty price tag (estimated to be at about $165 million), Interstellar was never considered a runaway hit at the American box office (grosses of $188 million), although it made enough overseas ($489 million) to turn a profit for Paramount. Released a few weeks before Thanksgiving in 2014, it was gone from a lot of theaters by Christmas of that year and is rarely at the top of the list when discussing director Christopher Nolan's best movie...but it happens to be mine, despite some issues I have with it.

Written by Nolan and his brother, Jonathan, but based on an idea by theoretical physicist Kip Thorne and film producer Lynda Obst (who both collaborated on the 1997 movie Contact), Interstellar is one of the few science-fiction movies you'll see (like the aforementioned Contact) where real science is used for the majority of its plot. Is "artistic license" used at points for plot purposes? No doubt, but it's so rare to get a "smart" film such as Interstellar, it's hard to criticize it for some of the liberties it takes.

The movie stars Matthew McConaughey as former NASA pilot (and widower) Joseph "Coop" Cooper, who now raises crops in the Midwest with his two children and father-in-law. The story is set in the near future, where space exploration has been abandoned in favor of focusing on producing food, as the environment has gotten so bad that Earth is slowly dying. Things have gotten to the point where schools have started to teach that the moon landing never happened - lest any children of the next generation start looking to the stars instead of focusing on the planet's immediate problems.

There's odd occurrences going on in the bedroom of Coop's youngest child, daughter Murph (played by Mackenzie Foy, then as an adult, by Jessica Chastain). Murph thinks she has a ghost in her room, but later on, the two of them figure out there's some sort of gravity flux going on in the bedroom, which translate into coordinates. Going to see if the coordinates mean anything, Cooper and his daughter run across a secret base, run by NASA, where the scientists are working on a way to save mankind. Their solution isn't to save the Earth, but rather move as many humans as possible into space. A wormhole has appeared near Saturn (and it doesn't seem to have shown up by accident - implying greater forces are at play) that leads to another galaxy with possible inhabitable planets. An earlier mission has already been sent to the planets with a handful of astronauts, and now NASA's leader, Professor John Brand (Michael Caine) wants to send his daughter Dr. Amelia Brand (Anne Hathaway) and a couple other scientists out to investigate what those other astronauts found. He also wants Coop to pilot the spaceship taking them.

The voyage isn't without personal costs to Cooper - and that's where science comes into play. Because of a black hole that is near the planets they're going to investigate, time will not move at the same rate for the astronauts as it will for those on Earth - meaning a few hours exploring a planet will mean the passage of many years for Cooper's children. Only through messages can he see what's going on back on Earth, and as the hours and days pass for him aboard the spaceship, his daughter and son and living whole lives back home.

As ambitious as Nolan's movie is, it loses some of its steam in later acts, starting with an unnecessary antagonist in the form of Dr. Mann (Matt Damon), who is one of the scientists found on one of the worlds our heroes go to explore. The final act seems like even more of a misstep, as Nolan's conclusion leans more to the spiritual side of things than the scientific - almost as if he hoped Interstellar could be a modern-day 2001: A Space Odyssey.

Despite a few problems, though, it's hard not to love Interstellar just because we get so few films like it. While I don't expect every science-fiction movie I see to be this ambitious and attempt to address questions like who we are as a species and where we might be going, wouldn't it be great if a whole lot more did?

Interstellar launches onto 4K in this Ultra HD/Blu-ray/Digital HD combo pack. The 4K disc, along with a 50GB Blu-ray and a bonus disc Blu-ray (which holds all the extras) come housed inside a black Elite keepcase, with the Blu-ray on the inside left hub and the 4K disc stacked on top of the bonus features Blu-ray on the right hub. There are no front-loaded trailers or advertisements on any of the three discs, and the main menu on both the 4K and Blu-ray movie discs are identical, with a short shot from the movie followed by a title screen (in the widescreen format) and menu selections horizontally across the bottom of the screen.

Interstellar was shot both on 35 mm film (for the 2.39:1 scenes) and 65mm IMAX (for the IMAX shots, shown here in the 1.78:1 format, which means the movie rotates between the two aspect ratios). The transfer here is from a 4k digital intermediate master taken from the original film elements, meaning viewers are in for a real treat when it comes to the visuals - which are nothing short of reference-quality.

The 4K scenes shown in the 2.39:1 format are impressive enough, with wonderful details, depth, sharpness, plus the deeper colors and contrast that have become the hallmark of 4K's high dynamic range (HDR) capabilities. But it's the footage originally shot in 65MM for IMAX that really "wows" in 4K, particularly during the scenes on "Mann's Planet" during the middle portion of the movie. The image is simply flawless, with every crack, crevasse, and grain of dust visible on the surface's rocky landscape. Facial features are wonderfully defined here, and even the fibers and stitching of the astronauts' white spacesuits can be made out.

Interstellar is going to be one of those go-to titles when wanting to show off 4K's impressiveness to friends and family. This transfer is the main reason you'll want to add this release to your home library - it's one of the best I've seen so far in this still relatively young format.

Interstellar didn't get an Atmos mix for its theatrical release, and it doesn't get upgraded to one here, either - providing viewers/listeners with the same English 5.1 DTS-HD Master Audio mix on the 4K discs that was present on the original Blu-ray release (and on the Blu-ray included here).

As lossless 5.1 audio goes, the track is an impressive one, with lots of surround activity, some low, booming LFE sequences (the most impressive ones coming during a dust storm early in the film and the rocket launch not that long afterwards), and an immersive feel throughout. My only real complaint about the audio is that the dialogue (almost exclusively featured through the front center speaker) is significantly lower than everything else. If memory serves, this was an issue in the theatrical version as well and actually reflects Christopher Nolan's intent for the soundtrack. So for good or for ill, I suppose this is an accurate rendering of the audio - just get ready to struggle to hear the spoken word in spots or have some of the louder sequences shake the room should you decide instead to turn up the volume a bit.

The other audio/subtitle options are exactly the same for both the 4K and Blu-ray discs: Tracks in 5.1 Dolby Digital for Spanish and French, along with an English Audio Description track and subtitle options in English, English SDH, Spanish, and French. 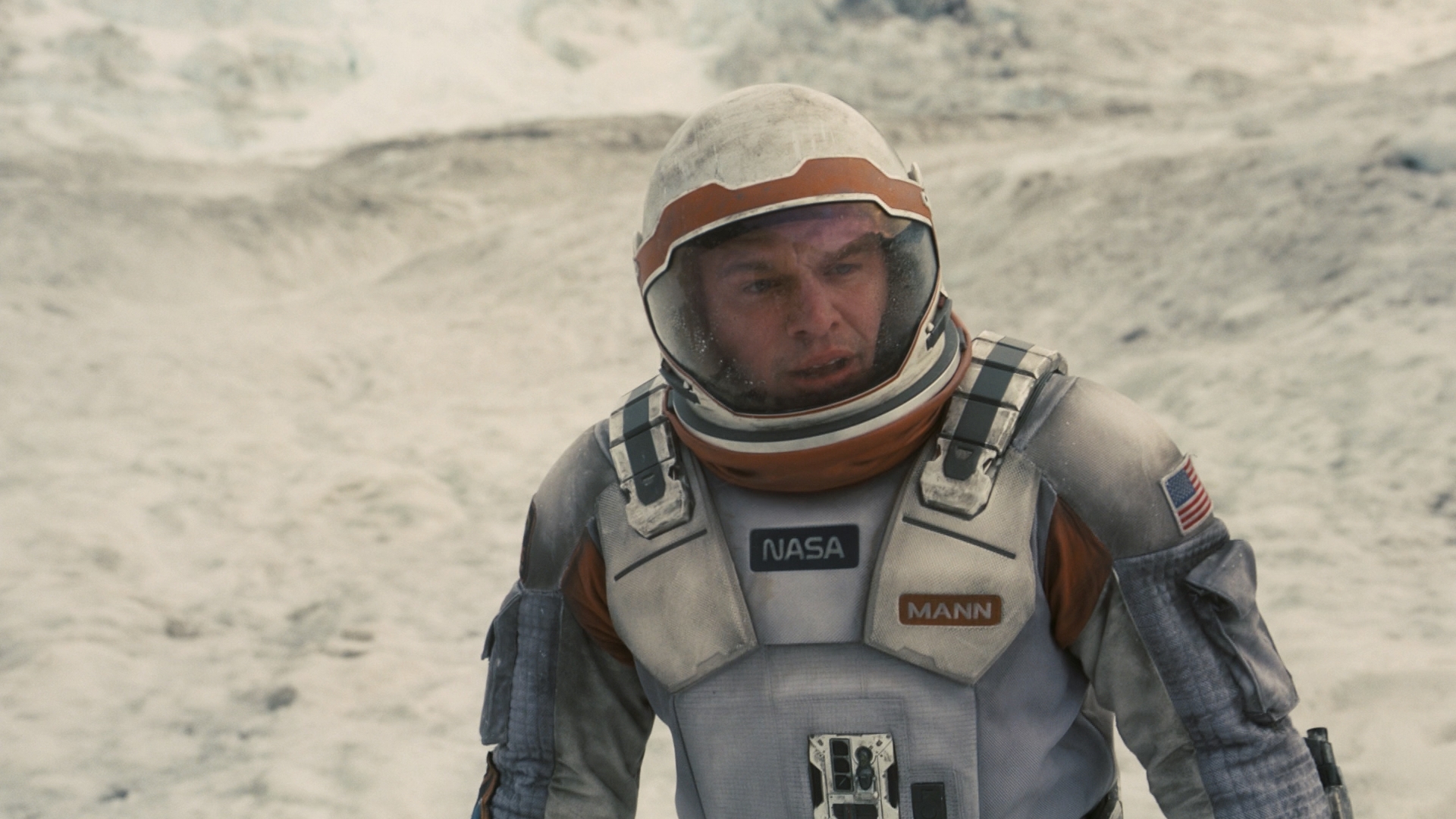 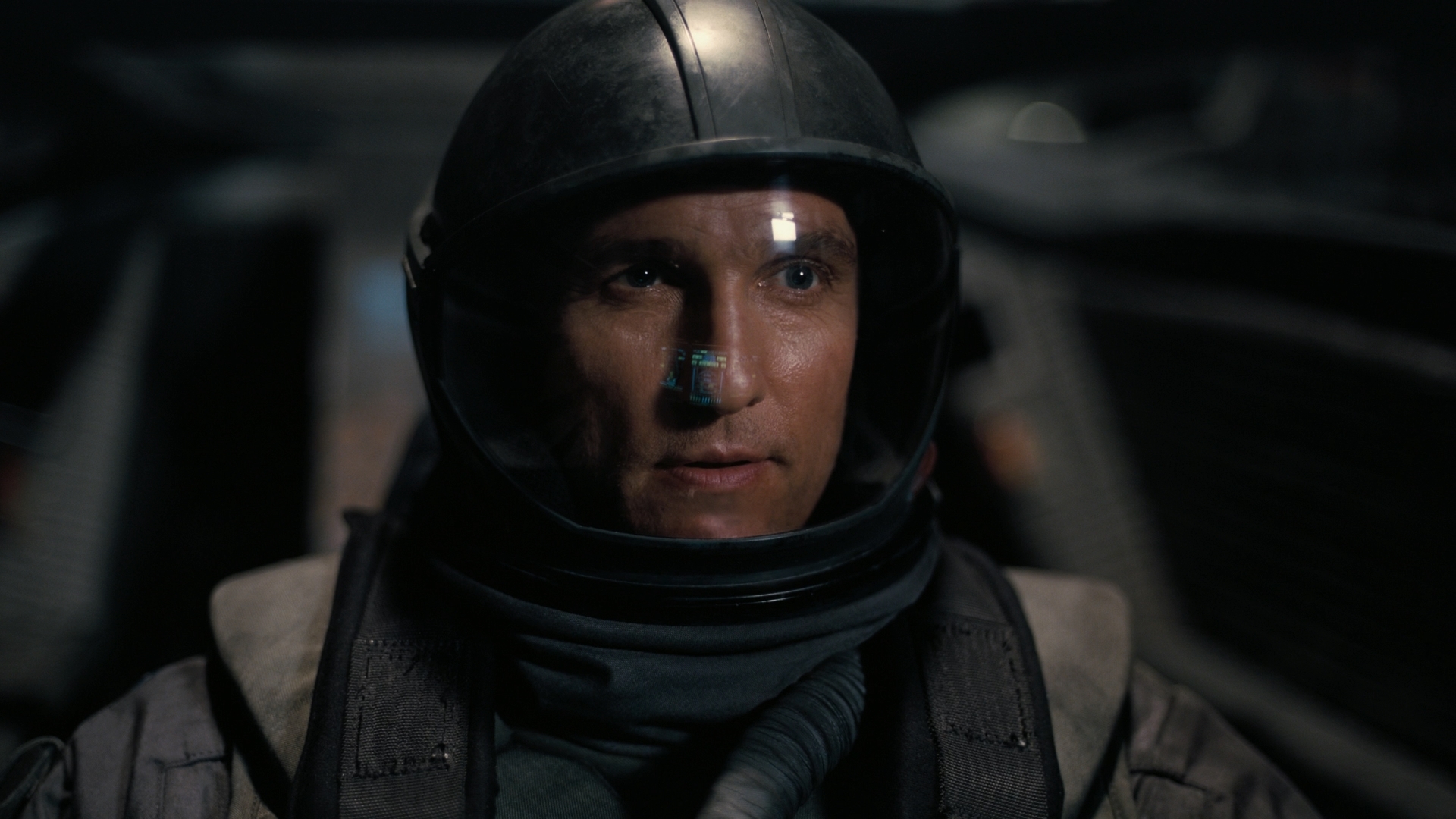 An impressive movie by any standards, Christopher Nolan's Interstellar doesn't quite make re-entry, but it's an ambitious, original film that is full of solid performances, great visuals, and an intelligent scientific slant. This 4K version of the movie gives even more clarity to the movie's already stunning images and is worth picking up, particularly for 4K aficionados who do not already own the standard Blu-ray release. Highly Recommended.