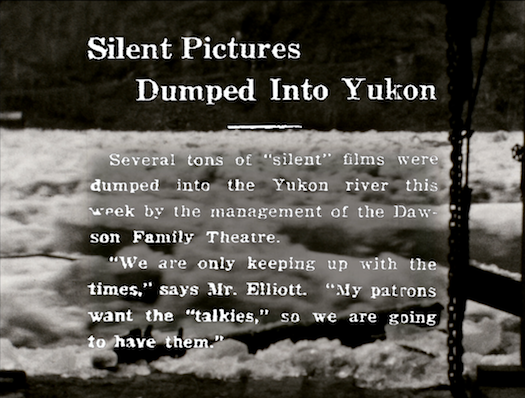 Bill Morrison's new documentary Dawson City: Frozen Time is a story of fire and ice; specifically, what history has lost to fire and what has been preserved by ice.

In its earliest decades, the film industry chose to distribute its products on nitrate prints that were not only highly inflammable, but sometimes spontaneously combusted. It's little surprise then that the majority of films produced in the silent era have been lost. In his best known film, Decasia, Morrison created a Brakhage-like collage of silent films seeming to disintegrate before our eyes. There are moments in Dawson City: Frozen Time reminiscent of that style of collage, but here Morrison has fashioned something more complex and satisfying than that earlier experiment.

In the late 1970s, a cache of otherwise lost silent films was discovered buried in the ground in Dawson City, a town which came into existence during the Klondike Gold Rush. Because of its remote locale, Dawson City was the end of the film distribution circuit in the early silent days, and studios typically didn't want to pay to ship their films back from the Yukon. As Morrison's film reveals, these movies were then burned or dumped in the nearby river (when it thawed) or -- in the case of what became known as the Dawson City Film Find -- buried in the permafrost.

Dawson City: Frozen Time offers a cosmology of the Film Find, starting all the way back with the first white man to discover gold in them thar hills. From there, Morrison retells the history of Dawson City, through the use of vintage stills, including a number of glass-negative photographs shot by Eric Hegg during the gold rush era, and pertinent visual moments from the many fiction films and newsreels that were discovered underground. Morrison somewhat pointedly avoids using Ken Burns-style voice-over narration; instead, he super-imposes titles over the images as they unspool, with the soundtrack largely a moody mix of isolated sound effects and Alex Somers's ethereal musical score.

Rather than simply track the development of this plot of land from the native population's fishing and hunting ground, to a raucous boomtown made world famous, to a sleepy forgotten backwater (or is it back-ice?), Morrison follows all sorts of political and cultural tangents which reverberate off of Dawson and the footage discovered there. These include the fate of the natives who were displaced to make room for gold prospectors, the eventual corporatization of gold mining in the area and its impact on the world labor movement, and the legacy that Dawson City had in the cinema and other arts. Sid Graumann, who founded many of the famous movie palaces in Los Angeles, like the Chinese and the Egyptian, got an early start as the Dawson City newsboy. Writers Jack London and Robert W. Service did some of their best-known work, based on their experiences in Dawson (the 1928 film version of Service's Trail of '98 is one of the non-Film Find movies excerpted here). Footage of the 1919 World Series anchors a brief vignette about the Black Sox scandal. Morrison even ties in the current presidency, by pointing out that the Trump family's wealth began with the founding of a gold rush hotel (Morrison says brothel; Snopes isn't convinced).

There are a few moments where Morrison engages just with the images captured in the Film Find. At one point, we are treated to a montage of newsreel footage from around the world -- revealing what the secluded citizens of Dawson would likely never get a chance to see otherwise. Morrison finds rhyming moments, such as beauty queens and women in native dress both doing 360-degree turns for the camera and different crowds, thousands of miles apart, jumping and cheering in an ecstatic frenzy. Later, Morrison fashions another poetic montage out of moments presented in the order they would have originally appeared chronologically on Dawson City's movie screens (although Morrison notes that sometimes the movies had been released for as long as five years by the time they were shipped up there).

Morrison's idiosyncratic approach to the material guarantees that this film will stick in the mind of viewers long after it is over. Part history, part elegy, part tone-poem, Dawson City: Frozen Time is melancholy but warm. You won't see anything else quite like it. But you should certainly see it. 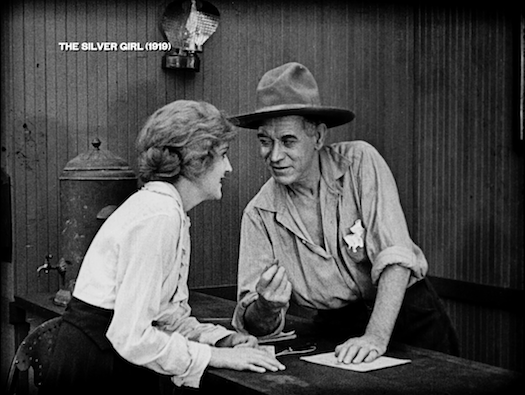 The Video:
A film like this shouldn't be judged like most. After all, the damage present to the many film clips included here represent the history of those prints, and are more than part of the point. Still, this AVC-encoded 1080p 1.33:1 presentation seems to offer a true representation of the raw scans of this footage. There's surprising depth and clarity in the period photographs that are featured throughout as well.

The Audio:
Since Morrison eschews Ken Burns-style voice-over in favor of titles, the soundtrack -- presented in both DTS-HD MA 5.1 surround and DTS-HD MA 2.0 stereo mixes -- is driven largely by the moody, ambient music of Sigur Rós producer Alex Somers. Both mixes sound great, although the surround mix is more immersive -- which serves the film well -- while the stereo mix comes off louder and more present. Somers's score blends well with the selective sound effects that Morrison uses to accompany certain clips. One subtitle option: English SDH.

(HD, 9:54) - Additional footage, following the fate of the Dawson City Film Find and Dawson City itself. This piece flows like an early version of the ending that was eventually deleted from the film. One understands why the filmmakers would cut this section for pace, but it feels like a natural continuation and effective alternate wrap-up of the existing film. 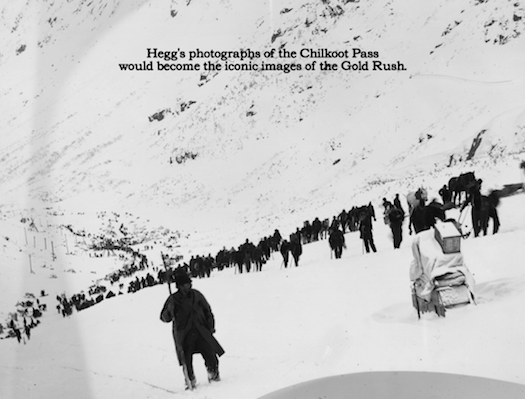