Kino // Unrated // September 19, 2017
List Price: $19.99 [Buy now and save at Amazon]
Review by Stuart Galbraith IV | posted January 9, 2018 | E-mail the Author
Many years ago, my late friend Bill Warren and his wife, Beverly, attended a talk with movie director Howard Hawks. The usual films were discussed - Red River, Bringing Up Baby, Only Angels Have Wings, Rio Bravo - and then someone there spoke effusively about Hawks's late-career feature Red Line 7000 (1965). After what seemed like several minutes of listening to this, Hawks confessed he thought his own movie was a pretty worthless pile of cow dung.

Conversely, Quentin Tarantino sings its praises, and French film critic director Francois Truffaut so loved it that, a dozen years later when he appeared as an actor in Close Encounters of the Third Kind, he instantly recognized Teri Garr, not for her ‘70s comedies but for her unbilled extra role as one of four dancing waitresses in Red Line 7000, so well did Truffaut know Hawks's film.

It's definitely lesser Hawks, yet part of the appeal of Red Line 7000 is that it's unequivocally, unmistakably Hawksian. It has many but not all the earmarks. Men bonding working together in a dangerous profession, strong female characters either as tough as the men or who toughen up to their hard level. Like Hawks's Hatari! (1962) it's episodic, with long, sometimes draggy and sloppy romantic interludes and conflict breaking up the sometimes thrilling action. Like The Thing (from Another World) (1951) it features an ensemble cast of non-stars, top-billed James Caan still several years away from being a box-office draw.

It's a curious picture: after Hatari!, a substantial hit starring John Wayne; and Man's Favorite Sport?, a lesser but nevertheless successful comedy starring Rock Hudson originally intended as a follow-up/homage to Hawks's Bringing Up Baby, came Red Line 7000 with no stars and an obviously lower budget, perhaps as low as $1.5 million. After that Hawks made two final Westerns with Wayne: El Dorado (1966), practically a remake of his classic Rio Bravo but (as far as this critic is concerned) even better; and Rio Lobo (1970), which also reworked, less obviously so, elements from Rio Bravo but not nearly as well.

The Blu-ray of El Dorado, another Paramount title, looked fabulous, but Red Line 7000 is just okay here. Regardless, it's still fairly entertaining, and worth seeing. 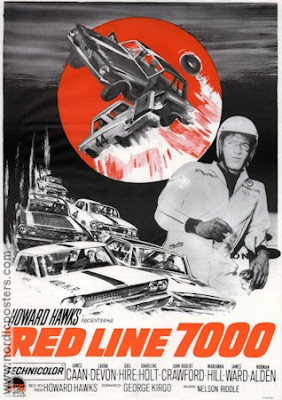 The NASCAR racing team of Pat Kazarian (Norman Alden) finds itself short a driver after Jim Loomis (Anthony Rogers), recently engaged, dies in a horrific crash at the Daytona 500. The arrival of Jim's fiancé, Holly (Gail Hire), at the Holiday Inn where they're all staying creates an uncomfortable situation for Pat, driver Mike Marsh (James Caan) and mechanic Kato (George Takei). Further, Holly tells Mike that she killed Jim: all three of her boyfriends died tragically. She gets a job at the local hangout.

One imagines Hawks's film was green-lighted during the simultaneous rush by numerous parties to make car-racing dramas. Budding star-drivers Paul Newman and Steve McQueen each had projects, eventually were produced as the terrible Winning (1969), with Newman, and Le Mans (1971), with McQueen. However, each paled to director John Frankenheimer's magnificent, first-out-of-the-gate 70mm roadshow Grand Prix (1966), well into production and getting loads of press coverage while Red Line 7000 was being made. At the other end of the artistic spectrum, low-budget imitators also filled movie screens, like AIP's similarly titled Fireball 500 (1966), with Frankie Avalon and Annette Funicello; and several Elvis Presley movies about racing: Viva Las Vegas (1964), Spinout (1966), and Speedway (1968).

Red Line 7000 falls somewhere in the middle of all these. Its use of grainy stock footage of NASCAR races - and admittedly spectacular crashes - can't remotely compete with Frankenheimer's innovative, you-are-there Super Panavision 70 lensing, while the production values are more akin to one of Paramount's Elvis vehicles than Hawks's usual productions.

Hawks's Hatari! offered absolutely incredible, never-to-be-duplicated animal capture/chase sequences, shot on location in Africa, but all the soap opera romantic melodrama stuff in-between was awfully silly and more than a little boring. Unlike Grand Prix and some of the other racing films of the ‘60s, Red Line 7000's screenplay has no interest in trying to get inside the heads of the drivers, to find out what makes them risk their lives for a living. Rather, like Only Angels Have Wings, Red Line's closed shop of talent needs no self-appraisal; indeed in the film they barely talk among themselves. Risking one's life is simply part of the job description.

The movie has many strange qualities. Gail Hire, in the pivotal role of Holly the seemingly cursed girlfriend, did no other movies and made just one TV appearance, opposite guest villain Vincent Price in a two-part episode of Batman. She's reasonably attractive but clearly no great actress, her slight lisp, odd intonation, and deep, Bea Arthur-level voice is an almost startling combination Hawks must have found intriguing but which really doesn't play well. Caan is a bit too actorly with his constant hemming and hawing, but Devon and Hill are very good as signature Hawksian heroines.

Tarantino aptly describes Red Line 7000 as a kind of polished AIP or Elvis movies, which both describes its appeal and squarely nails it in terms of its budget-defined appearance.

Kino's Blu-ray of Red Line 7000, licensed from Paramount, looks okay, not great. The color is a bit tepid, and the elements show their age here and there. The racing scenes incorporate a lot of stock footage, some of which appears blown-up from 16mm, judging by its graininess. The DTS-HD 2.0 (mono) Master Audio comes off a bit better, strong for what it is. English subtitles are offered on this Region A disc.

The lone supplement is an audio commentary by Nick Redman and Julie Kirgo, apparently moonlighting from their normal digs at Twilight Time.

A must for Howard Hawks completists and not bad on its own terms, Red Line 7000 is Recommended.