GKIDS Films // PG // January 16, 2018
List Price: $19.95 [Buy now and save at Amazon]
Review by Stuart Galbraith IV | posted January 13, 2018 | E-mail the Author
My Neighbors the Yamadas (Hohokekyo tonari no Yamada-kun, 1999) is a departure for Japan's Studio Ghibli, the company behind such contemporary animated classics as Grave of the Fireflies, My Neighbor Totoro (both 1988), Princess Mononoke (1997), and Spirited Away (2001). Adapted from Hisaichi Ishii's four-panel manga Nono-chan (1991-present), director Isao Takahata deliberately eschews the usual Studio Ghibli look, opting instead for a different stylization, deviating from the rich colors of other films by the company, and instead embraces a more schematic, sketchy, watercolor and pastel appearance. The movie was much less successful in Japan (earning less than $8 million against a $20 million cost) and around the world, stalling a Blu-ray release in the U.S. until now.

The look of My Neighbors the Yamadas isn't really the problem with the film, which is entertaining but slight and less universally appealing than other Studio Ghibli productions. For one thing there's no story per se; rather, the film unfolds as a series of vignettes of varying length, sometimes with abrupt and unclear transitions from one to the next. Also, while amusing, both Ishii's manga and the film are quite similar to an earlier, more established, even iconic strip and long-running prime-time television series, Sazae-san, which made My Neighbors the Yamadas seem a lot less innovative yet imitative. 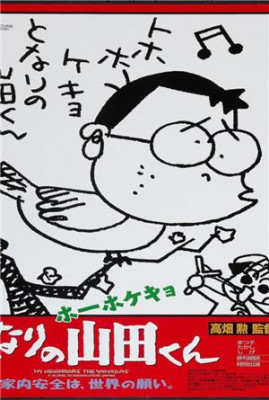 The family resides in a typical urban Japanese home, the family unit familiar if slightly old-fashioned by contemporary standards. Takashi, for instance, smokes constantly in the house, orders his wife around in a very postwar Japanese male manner, and likes to sneak off to play pachinko. The family spends much of its time huddled under a kotatsu, a low table with a blanket over it, heated from below, to keep warm in Japan's typically drafty homes, lacking as they do in central heat.

An example of the type of humor that's low-key for Japanese audiences and which doesn't translate that well for non-Japanese ones involves the kotatsu itself. Matsuko and Shige are cleaning one afternoon and when they can't find a number of items have an epiphany and decide to look under the kotatsu, where they find all the missing items and other long-lost treasures. (The western equivalent would be under the cushions of the family room sofa.)

The vignettes are sometimes 30 seconds or less, and likely adapted from one of the four-panel strips, while the longer ones run maybe 10 minutes. For instance, there's an extended sequence in which the absent-minded family accidentally leave Nonoko-chan behind in a busy department store then, and in their car during the height of rush hour, realize they've forgotten her.

Like much of the film, it's mildly amusing and somewhat educational, in this instance the family's panic builds slowly, partly because in Japan even small children are typically more self-reliant, and short of Nonoko-chan being kidnapped by a stranger, there's initially little concern that anything terrible might happen to her.

What struck me most about My Neighbors the Yamadas was how closely it resembled Machiko Hasegawa's earlier four-panel strip Sazae-san (1947-74). The enormously popular strip, like Charles Schulz's Peanuts, diversified into other media. There was a popular series of Sazae-san movies in the late 1950s, and several live-action adaptations for television. However, by far the most famous incarnation is Fuji Television's long-running animated television series, which began in 1969 and is still going strong today, more than 7,000 (!) episodes later. Take that, The Simpsons.

Indeed, so iconic is the series that for several generations of Japanese, its familiar theme song served as a wistful reminder that the weekend was ending, the program airing since its inception from 6:30-7:00pm on Sunday nights.

Except for its title character, an adult woman in her mid-20s, the dynamic is much the same: a younger brother and sister, ages 11 and nine, respectively; a 50-something mother and father; and a family pet, this time a cat. The humor is nearly identical, wry little observations about how family members interact with one another and their neighbors.

In Yamadas, for instance, Matsuko, wants to order sushi for dinner, but Shige complains it'll be a waste of money and that she'll make it instead. However, the old lady has a change of heart and decides to try a recipe for Beef Stroganoff, which turns into a messy disaster and no one is happy. A very Sazae-san-like vignette has the father calling from the station during a downpour asking for someone to bring him an umbrella. Everyone is too lazy to help, while asking that he pick up dinner for them at the supermarket on his way home. He's not at all happy about this, but then his family surprises him in the end.

A Shout! Factory release, My Neighbors the Yamadas gets a top-tier transfer in its original 1.85:1 widescreen, with DTS-HD Master Audio in both English and Japanese with optional subtitles in English and French. There's also a Dolby Digital 5.1 French track. Picture and audio are essentially perfect. A DVD version of the film is also included and everything is region-encoded.

Supplements, in both English and Japanese with optional English subtitles, include storyboards, the NTV Network television special "The Secrets of My Neighbors the Yamadas," a behind-the-microphone featurette, trailers and TV spots. There's also a nice little booklet with statements from producer Toshio Suzuki and director Takahata.

My Japanese wife and 10-year-old daughter likewise were a bit underwhelmed by My Neighbors the Yamadas. We enjoyed it okay and got some of the jokes western world viewers are less likely to pick up, but found it only modestly likeable and generally unmemorable. Worth seeing and the transfer is great, but just Recommended.