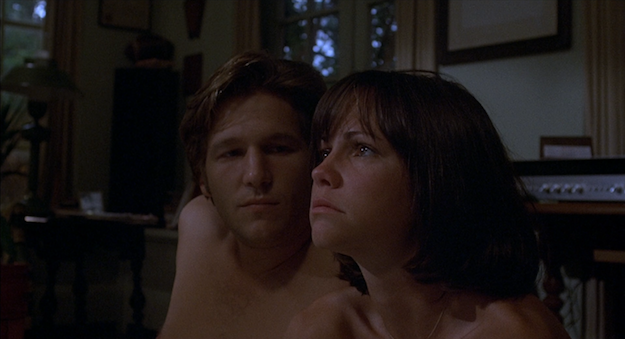 At this point, the unjustly neglected 1976 film Stay Hungry is possibly best known as the film that proved Arnold Schwarzenegger could act. Sure, he made his debut in Hercules in New York, but no one who enjoys that film is looking for good acting. Stay Hungry doesn't stunt-cast Arnold as something he's not -- he plays a foreign bodybuilder, training for competition and living it up in his off hours -- but the film also doesn't just use him as a muscly prop. There's a disarming, emotionally full-blooded dimension to Arnold's performance as Joe Santo that he rarely gets to exploit in his later films, apart maybe from the old-man gravitas he exudes in his most recent films like Maggie and The Last Stand.

To be fair, Arnold doesn't have to do the main job of emotional heavy lifting (ha ha, see what I did?) in Stay Hungry. Based on Charles Gaines's novel, this comic drama is centered on Craig Blake, the newly orphaned scion of an old-money Alabama family, played by Jeff Bridges with the blend of cockiness and confusion that was pretty much his forte at the time. Craig is hooked up with some shady real estate guys, including Maniac's Joe Spinell, who want him to buy a local fitness joint, so they can knock it down and turn the whole block into a giant high-rise.

There are a few wrinkles. Not only does the owner of the gym, the irascible, toupee-wearing Thor (R.G. Armstrong), not want to sell, but Craig comes to like the gang of misfits at the gym. First off, there's the lively cutie patootie who greets him at the door, Mary Tate Farnsworth (Sally Field). She's in some sort of relationship with Joe the bodybuilder, but neither of them seem to mind it much when Craig starts flirting with Mary Tate. There's also Joe's curly-haired "greaseman" (future Freddy Krueger, Robert Englund), the harried women's martial arts instructor (Helena Kallianiotes), and an offbeat masseur (Magnum P.I.'s Roger E. Mosley). Needless to say, these weirdos are a lot more fun than hanging around his family's disused mansion with only a disapproving servant (Scatman Crothers) to keep him company.

There's a clash of cultures when Craig tries to mingle his old country club pals (such as Ed Begley Jr. and Fannie Flagg) with his earthy and "real" new friends, although there appears to be no shortage of high-toned Southern belles who would like to take Joe for a spin. After all, who can resist the pull of an Austrian bodybuilder who has learned to play bluegrass fiddle? Meanwhile, Craig and Mary Tate are getting on like a house on fire, but she falls for him harder than he falls for her.

Some of the other reviews I've read of Stay Hungry characterize it as minor or lightweight, and admittedly, Stay Hungry isn't much concerned with the "stakes" of its plot, in a film school screenwriting class sort of way. Director Bob Rafelson (Five Easy Pieces) instead gives us charming, multi-dimensional characters and the distinct regional flavor of the Southern setting. And with a cast as talented as this, and a milieu as unique, that more than sustains the film. The final act -- which goes both darker and more broadly comic than the preceding 80 minutes -- doesn't quite mesh with the film's till-then naturalistic style, but it would be disingenuous to say that the climactic sequence featuring dozens of speedo-clad bodybuilders running loose on the bustling streets of Birmingham didn't tickle me with its left-field absurdity. That's just good cinema. 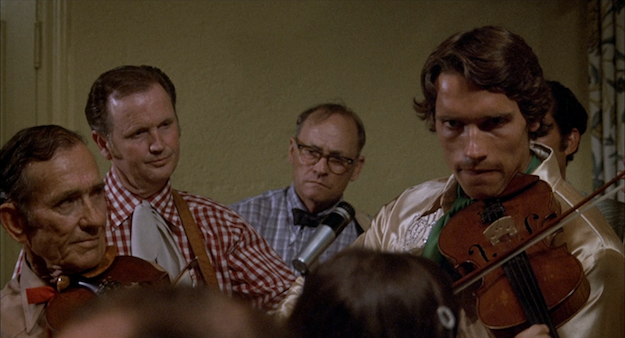 The Video:
Solid, but not a jaw dropper. The AVC-encoded 1080p 1.85:1 transfer is pretty clean, with occasional dirt and debris. Victor Kemper's cinematography is naturalistic, which translates to a bit grainy and soft. Certain shots look particularly sharp, but the overall style doesn't really demand crystal clarity.

The Audio:
As with the image, the soundtrack is not particularly flashy. And as such, the DTS-HD MA 2.0 mono audio presentation isn't a showstopper, but it's clean and clear, with satisfying fidelity that gets the job done. No noticeable flaws or damage. Optional English subtitles are also provided.

Special Features:
Sadly, none of the bonuses included on MGM's DVD have been brought over. There's not even a trailer.

Final Thoughts:
Stay Hungry is the kind of oddball, character-driven gem that could have only been made by Hollywood in the 1970s. A tremendous cast, all shockingly young. This one's just got a good vibe about it, you know? It's a shame the DVD bonuses couldn't make the leap to this release, but on the basis of the flick alone, this comes Highly Recommended. 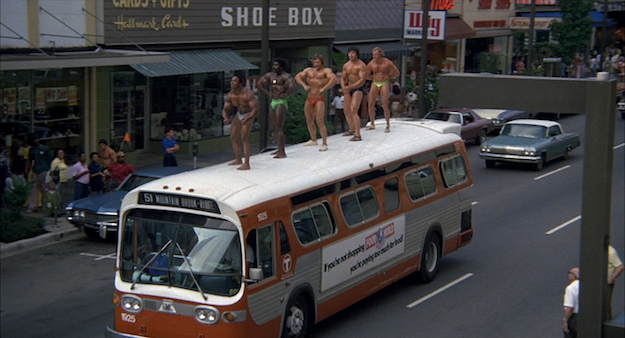