Garden of Allah, The

Kino // Unrated // January 9, 2018
List Price: $29.95 [Buy now and save at Amazon]
Review by Stuart Galbraith IV | posted January 15, 2018 | E-mail the Author
Not quite what one might have expected, The Garden of Allah (1936) is rather unlike star Marlene Dietrich's other Hollywood movies of the period. I expected something super-stylized and ornate, like Joseph von Sternberg's The Scarlett Empress (1935), with Dietrich a fairy tale Catherine the Great, or Morocco (1930), in which she played, for neither the first or last time, a provocative cabaret singer. Rather, The Garden of Allah is a romantic melodrama about spiritual crisis, and Dietrich plays a glamorous looking yet comparatively ordinary woman.

A big draw is that it's one of the first narrative features photographed in three-strip Technicolor, just the fourth following RKO's Becky Sharp (1935), Fox's The Little Colonel (1935), and RKO's Dancing Pirate (1936). David O. Selznick's company made The Garden of Allah for release through United Artists and, as he was wont to do, spared no expense. The picture cost nearly $2 million, roughly six times the cost of an average studio feature, and sixty times the cost of low-budget "B" from an independent company. 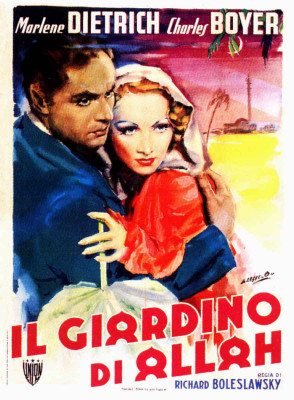 Following many years of hardship caring for her invalid father, wealthy but lonely Domini Enfilden (Dietrich) is facing a spiritual crisis. Returning to the convent where she was raised, the Mother Superior (Lucile Watson) advises her to travel to the Sahara Desert, suggesting she will find purpose to her life there.

Elsewhere, at a Trappist monastery near the desert, Brother Antoine (Charles Boyer), sole keeper of the secret formula of the monastery's famous liqueur, its sole source of income, suddenly abandons his faith, fleeing into the outside world he's not known since childhood.

En route to Beni Mora in Algeria, the two spiritually rudderless protagonists meet, and later the troubled but reticent Brother Antoine, now in civvies and calling himself Boris Androvsky, rescues Domini from a café after a fight breaks out. Riding together to an oasis near Azur, they begin to fall in love, despite her religious fragility and his utter aversion to the faith he's rejected.

Adapted from Robert Smythe Hichens 1904 play and filmed previously in 1916 and (by director Rex Ingram in) 1927, The Garden of Allah has a monk abandoning his sacred vows to God for earthly love, a premise quite shocking a century ago, and still a big enough concern in 1936 that Selznick clashed with Hollywood's Production Code over the film's story, the latter concerned that a fallen monk engaged in a consummated romance would deeply offend movie-going Catholics. Such concerns seem quaint today, yet the movie's willingness to even explore these ideas was unusual, and it probably never would have been made at all, except outside the system by a company with the daring and resources Selznick enjoyed.

Polish theater director and acting teacher-turned-director Richard Boleslawski died young, at 47, just three months after The Garden of Allah premiered, and for probably that reason isn't well remembered by cineastes, despite credits that include Rasputin and the Empress (1932), Men in White (1934), Les Misérables (1935), and Three Godfathers (1936). The Garden of Allah, like its cinematography, has a decidedly European look, at times at odds with the Selznick-imposed Hollywood glamor.

Another facet of the film that impressed colleague Cinesavant as much as it did me was the featured performance by dancer Tilly Losch. Every Hollywood movie with an exotic setting (the Middle East, Africa, Asia, the South Seas) has one: the main characters are in a nightclub setting, or taken before a sultan, appear in a palace (whatever) and one or a parade of dancers in veils or grass skirts prance about trying to appear seductive. Such scenes are almost always laughable, but in The Garden of Allah Losch's dancing and Boleslawski's direction actually make it work. Her moves are indeed intoxicating yet subtle in this generally unsubtle film; Cinesavant is not far off when he argues that, for that scene anyway, she "steals the show."

To fault the film for being wildly inauthentic and unrealistic misses the point. The Arab Fantasyland created on Hollywood soundstages and in the Arizona desert is merely the lush backdrop for the romantic melodrama-religious quandary Dietrich's and Boyer's characters find themselves in. By today's standards it doesn't really work, bordering on high camp, but so what? Squint and it's easy to imagine a 1936 movie audience lapping it up, like Domini in a puddle of tears at the end and, for 2018 audiences, the journey there is sumptuous feast of eye candy.

Kino's Blu-ray does not appear to source original black-and-white separation negatives, but rather sources composite elements that are still very impressive, if noticeably less than perfect. The DTS-HD 2.0 Master Audio (mono) is fine, and supported by optional English subtitles. No Extra Features, save for related trailers from Kino's growing Blu-ray library.

Definitely worth seeing, The Garden of Allah resembles other ‘30s Marlene Dietrich confections in some ways, not at all in others. Highly Recommended.