Not as a Stranger

Kino // Unrated // January 9, 2018
List Price: $29.95 [Buy now and save at Amazon]
Review by Stuart Galbraith IV | posted January 17, 2018 | E-mail the Author
An enormous hit in 1955 yet virtually forgotten today, despite an all-star cast including Robert Mitchum, Frank Sinatra, Olivia de Havilland, Gloria Grahame and, in an early role, Lee Marvin, the medical drama Not as a Stranger marked the directorial debut of Stanley Kramer. As a producer, Kramer already had nearly a dozen prestigious films under his belt, including Champion, Home of the Brave (both 1949), Death of a Salesman (1951), High Noon (1952), The Wild One (1953), and The Caine Mutiny (1954). Breaking from Columbia Pictures, Kramer began a long-term association with United Artists, shrewdly pouring money into the screen rights of the year's bestselling novel, packing it with big-name stars, and spending enormous amounts of money promoting it. (Kramer was an unsung genius of hard-sell movie promotion.)

His liberal populist humanism and the topicality of his movies served him well for about 20 years, but since his decline in the early 1970s he's remained stubbornly unfashionable among cineastes, who find his work as a director ham-fisted and obvious. But for those two decades Kramer was, undeniably, ahead of the socio-political curve, striking a fine balance between daring social consciousness and commercial filmmaking.

Yet both the political left and the political right criticized the majority of Kramer's movies as director. Conservatives found On the Beach's (1959) post-nuclear winter story defeatist and irresponsible while some on the left criticized it for not being graphic enough. (No corpses are seen, as if the Production Code would have allowed mounds of rotting corpses littering the streets.) They pounced on the interracial marriage comedy Guess Who's Coming to Dinner (1967) because the black man engaged to the young white woman was idealized and played by handsome Sidney Pointier, missing the whole point of that decision. They thought Kramer incapable of making comedy generally, criticizing It's a Mad Mad Mad Mad World (1963) for its epic-ness, as if Kramer was trying to buy unearned laughs.

As for Not as a Stranger, the medical and political issues it raises may be commonplace and familiar in the wake of movies and TV shows like The Hospital, ER, and more recently Chicago Med, but viewed with 1955 eyes the picture looks at that world in ways not seen in movies up to that time. It's also a bit surprising in the manner in which the personal lives of its up-and-coming doctors play out. Though Kramer makes a lot of rookie director mistakes, including an outrageously bad seduction scene laughable even then, it's a very engrossing, interesting film that deserves to be better known. 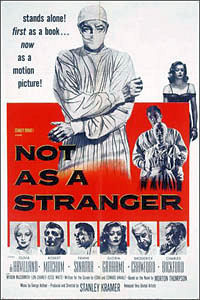 Olivia de Havilland is top-billed but Robert Mitchum is the primarily protagonist, Lucas Marsh, a brilliant and obsessively determined medical student facing expulsion after his despondent, alcoholic widower father (Lon Chaney, Jr.) drinks away Lucas's tuition money. Left with no other option, he marries Swedish-American operating room nurse Kris(tina) Hedvigson (de Havilland), an "old maid" with several thousand dollars stashed away in her bank account. She loves him and he's attracted to her, but his burning desire to get through school comes first and so, against the advice of roommate and fellow medical student Alfred Boone (Frank Sinatra), Lucas marries Kris for her money.

Unlike his materialistic, fee-obsessed classmates, after graduating Lucas accepts a position in Greenville, a city in rural America, working under similarly dedicated Dr. Runkleman (Charles Bickford). Kris is happy to give up nursing and support Lucas as an ordinary housewife, but she longs to have children Lucas clearly does not want. Increasingly self-destructive, he begins an affair with rich widow Harriet Lang (Gloria Grahame) just as Kris realizes that she's pregnant.

Not as a Stranger is a lot more interesting than this brief synopsis might suggest. Although the groundbreaking television series Medic had debuted the year before, most audiences regarded doctors in saintly terms as seen in movies like MGM's "Dr. Kildare" film series. Realistic depictions of medical procedures were virtually nonexistent in Hollywood films and certain medical conditions like cancer were essentially taboo. In Not as a Stranger, Lucas's colleagues include students questioning the merits or treating the poor, arrogant and pig-headed doctors, and incompetent political appointees. Conversely, Lucas's dedication is absolute, but he's too uncompromising to work within the system, completely unforgiving of others' mistakes, and his obsession with practicing medicine, driven by an obviously unhappy childhood, all but destroys his marriage.

Though he'd quickly improve, Kramer's direction is awfully clumsy. In trying to distill Morton Thompson's thick novel into a 135-minute feature, Kramer and screenwriters Edna and Edward Anhalt create several labored montages of Lucas treating one patient after another in short, jokey vignettes. Kramer's direction of the actors is generally good and the movie is packed with fine performances, but his blocking is frequently awkward. (So awkward that Frank Sinatra's heavy scar tissue around his left ear is more visible here than perhaps any other movie he ever made.)

Kramer's worst neophyte judgment comes when Harriet and Lucas decide to get it on, crudely symbolized by Lucas setting a stallion in heat loose upon a waiting mare, a scene so insanely over-the-top one can only admire Kramer's restraint in not having the stallion gallop through a tunnel while champagne bottles pop and fireworks explode overhead.

Yet, the dynamic behind their affair is unusual. Grahame is neither the bad girl-temptress she often played in earlier noir, nor is Lucas driven by sexual desire so much as guilt-fueled self-destructiveness. She's fully aware of this, and actually cautions him against their having any kind of sexual relationship, despite her loneliness. Olivia de Havilland's billing seems less about star stature than a nod to the movie's primary audience, presumably women, yet the long-suffering Kris is clearly a crack nurse, a successful if underpaid working woman whose job financed her husband's education, and whose tutoring and advice helped earn him his medical diploma.

When he begins to self-destruct she's had all that she can take and she's the assertive one who kicks him out of the house. (In direct opposition to the lame symbolism with the horses, this scene is quite powerful.) She's actually quite the opposite of the typical woman depicted in Hollywood movies of the 1950s, and as Not as a Stranger's final scene demonstrates, she's clearly calling the shots in that relationship.

Though forgivably dated after 60-plus years, the film's depiction of medical school and medical procedures boasts a level of verisimilitude rare if not heretofore unseen including, reportedly, the first graphic depiction of open-heart surgery. Some viewers felt Mitchum and Sinatra too old to be believed as medical students, but Lew Ayres was likewise in his 30s when he played medical student Dr. Kildare a dozen years earlier.

The picture opens well, with pathologist professor Dr. Arons (Broderick Crawford) dissecting a corpse in an operating theater as one student faints dead away and others appear on the verge of retching. (It plays rather like the opening titles for the later Quincy, M.E..) Crawford's dialogue is on the flowery side, but the actor's sincerity and rat-a-tat-tat, Highway Patrol-like delivery, lecturing on the ethics of medicine is nonetheless captivating.

Crawford, de Havilland, Mitchmum, and Bickford are all particularly good. Kramer rather obviously intended Ingrid Bergman for the role of Kris, but de Havilland's subtlety really sells the character. Amusingly, Mitchum remembered the actors "not so much as a cast as a brewery," referring to alcoholics Crawford, Chaney, Lee Marvin (as a fellow medical student), and Myron McCormick (as an incompetent doctor), as well as heavy drinkers Sinatra and himself.

An early 1.85:1 flat widescreen release in black-and-white, Not as a Stranger gets a decent if not particularly spectacular 1080p video transfer, the blacks looking a little washed out and the film showing minor damage here and there, especially during the final reel. The mono audio, supported by optional English subtitles, is adequate.

The main extra is an audio commentary track by Troy Howarth, along with what appears to be a general release trailer, and not the reportedly five-minute one hosted by Kramer that featured make-up and costume tests with the actors and perhaps some behind-the-scenes footage.

Engrossing as melodrama, fascinating as a portrait of the medical profession as it existed in 1955, and despite some directorial clumsiness, Not as a Stranger has more than its fair share of surprises and generally is quite effective. Highly Recommended.