Simpsons - The Eighteenth Season, The

Fox // Unrated // December 5, 2017
List Price: $33.98 [Buy now and save at Amazon]
Review by Stuart Galbraith IV | posted January 18, 2018 | E-mail the Author
Like Old Man River, The Simpsons just keeps rollin' along. Recently renewed for two more seasons of 22 episodes each, by 2019 The Simpsons will have been on the air for 30 years with 600-plus episodes, making it the longest-running American sitcom and the longest-running animated series. (However, Japan's Sunday night staple Sazae-san, has it beaten by a mile: 48 seasons and around 7,500 episodes.) Like the 20-year run of Gunsmoke, which produced about as many shows, the cast of The Simpsons has remained remarkably, virtually unchanged.

Fans and critics generally agree that The Simpsons has been in steady creative decline for a number of years, since around seasons 10 or 11. Looking at Season 18 on DVD, there's certainly some evidence of that, but nearly every episode still offers at least one big belly laugh, and some of the episodes in that set are quite funny throughout. Rather, I think, television viewing habits and the American animation industry landscape has dramatically changed since The Simpsons debuted. It's been a remarkably stable comedy, given its longevity, but the world around it is nearly unrecognizable from what it was, some of these changes spawned by The Simpson's very success.

Consider this: When the series began, few people owned cellphone, DVDs fans now collect were still years away, and the Internet was still in its infancy. It was one of the very few animated shows to target adults, the first successful prime-time animated series since Wait Till Your Father Gets Home left the air in 1974, and yet its success led to an explosion of more adult-oriented cartoon shows, among them Family Guy, King of the Hill, and South Park, as well as subversive Nickelodeon series like The Ren & Stimpy Show. One imagines the topical and cultural references of the early seasons befuddle younger audiences today.

In a sense, there had been nothing like The Simpsons since the heyday of Rocky & Bullwinkle. So innovative was The Simpsons when it was new, my friends and I made a point of never missing new episodes broadcast Sunday (and, sometimes Thursday) nights, taping shows to re-watch multiple times on our VHS players in the weeks that followed. Viewing habits have changed since then, and probably the series' great glut of syndicated reruns made premieres of new Simpsons episodes seem much less special than they once did.

Indeed, so much has changed over even the last four or five years that a release of The Simpsons' eighteenth season on DVD is almost as much a novelty as a new album debuting on vinyl. The last regularly released DVD set of The Simpsons, Season 17, was more than three years ago. Only fan outcry prompted Fox to resume production. 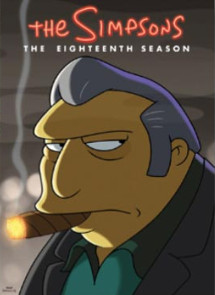 This is perhaps best exemplified in the show's annual "Treehouse of Horror" Halloween shows, standalone episodes that mostly spoof popular horror and sci-fi TV shows and movies. (So creatively exhausted is this mainstay that season 18 features a parody of the German silent classic The Golem!) Similarly, the opening "couch gag," with a different gag to open every episode (and inspired by the variations with Donald Duck in the opening titles of The Mickey Mouse Club), is so run into the ground that the show's writers might consider dropping it entirely.

A few Season 18 episodes stand out from the pack, including "The Haw-Hawed Couple," "Stop, or My Dog Will Shoot," "24 Minutes," "Yokel Chords," and "The Wife Aquantic" among them. Guest stars include everyone from Gore Vidal and Stephen Sondheim to Andy Dick and Melallica.

While some fans seem to love the elaborate packaging of these Simpsons DVD sets, I found this one to be an unruly mess. Considering the episodes are as short as 21 minutes, it shouldn't take 10 minutes to take the disc out, get past all the FBI warnings and animated menu screens and actually start a show. The set comes in a heavy-duty paper box and inside that is foldout packaging with the DVDs inside paper sleeves. I belatedly discovered an elaborately designed booklet, modeled after "True Crime" pulp magazines, that includes an episode guide. But the discs themselves don't list episode numbers or titles.

The shows look just okay, these being from 2006-2007 when the program was not yet in 1.78:1 widescreen nor in high-definition. Though apparently still shot on film it appears they were still finishing shows on tape, and that hampers the image quality. The Dolby Digital 5.1 audio is great, however, amended by 2.0 Dolby Surround Spanish and French tracks, with optional English and Spanish subtitles. The four discs are region 1 encoded.

Supplements include a "Welcome Back, Loyal Fans!" message, acknowledging the long delay between DVD releases; audio commentaries on every episode; deleted scenes with commentaries; a bonus episode; "Multi-Angle Animation Showcase"; and "A Conversation with Fat Tony," the featured Simpsons character for this DVD set.

Not what it once was but still enjoyable, The Simpsons: The Eighteenth Season is Recommended.