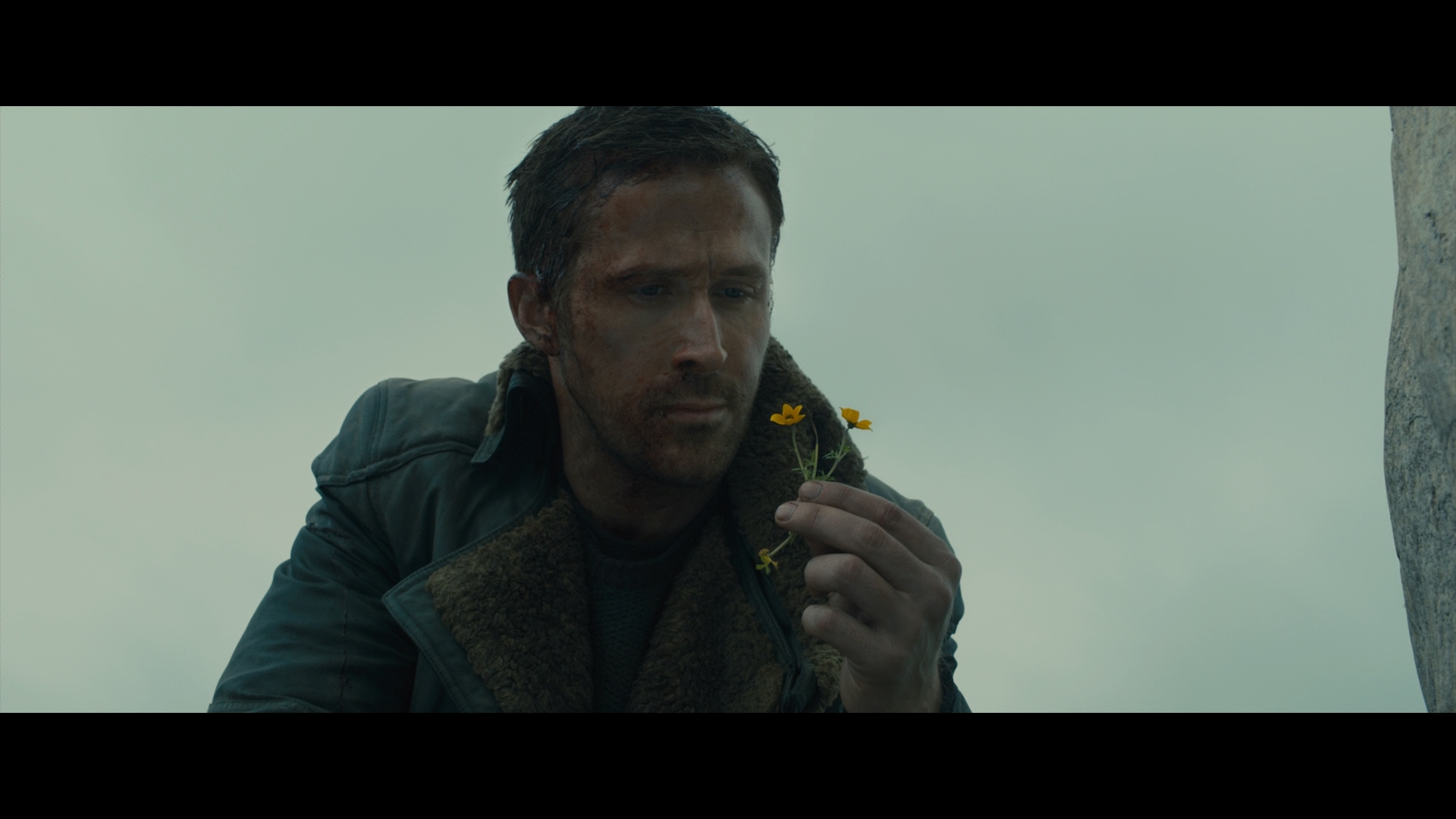 I have either the advantage or disadvantage of catching up with Blade Runner 2049 now, after last fall's critical onslaught of raves for this sequel/reboot and after the movie underplayed at the box office (with a budget of $150 million, it made only $92 million in North America, although it nabbed an additional $167 million overseas). So who was more right about this movie - the critics who loved it or the moviegoers who stayed away? Honestly, they're both a little right and both a little wrong. Blade Runner 2049 is a good movie, but it's far from the masterpiece that it has been made out to be. The story is far too thin to justify the film's lengthy run time, and the ideas addressed here have already been addressed before - back in the original 1982 movie.

Set 30 years after the original movie, Blade Runner 2049 stars Ryan Gosling as "K," a blade runner who has the duty of tracking down and killing (aka "retiring") rogue replicants. "K" is a replicant himself (not a spoiler, as it's given away early in the movie) and takes orders from a human police boss, Lt. Joshi (Robin Wright). After disposing of a replicant in the opening sequence, "K"'s spinner (the flying cars that blade runners get around in) detects a box buried beneath a nearby tree. Curious about what it might be, the box is dug up to reveal what appear to be human remains. Taking the bones back to the police station for further examination, it's revealed that they're actually the bones of a female replicant.

Further examination shows that the replicant had a caesarean section and died during childbirth. Lt. Joshi fears that public knowledge that replicants may be able to reproduce will lead to an all-out war between humans and replicants, so she orders "K" to find out what happened with the child - and kill him or her if they are still alive.

"K"'s investigation leads him to the Wallace Corporation, headed up by Niander Wallace (Jared Leto), who took over replicant production after the collapse of the Tyrell Corporation years earlier (when something characters refer to as the "Black Out" happened). Wallace IDs the replicant bones as Rachael, Rick Deckard's (Harrison Ford) girlfriend in the 1982 film. Wallace is also interested in the fact that Rachael produced a child, but for much different reasons - he hopes that by figuring out how replicants can procreate on their own, it will be much easier/cheaper to produce more of them. He sends his replicant enforcer, Luv (Sylvia Hoeks), back to police headquarters to destroy the bones in question and orders her to find the child before "K" does.

It would be unfair to reveal much more of the plot for those who have yet to see the film, but I'm sure many are wondering how Rick Deckard fits into all of this - as it's no secret that Harrison Ford has gotten top billing alongside Ryan Gosling. Well, Ford doesn't even show up until the movie is past its one-hour, 45 minute mark, and Deckard seems more like a plot point in Blade Runner 2049 than a chance to revisit and reveal more about the "ex-cop, ex-killer, ex-blade runner."

Which is not to say that Ford doesn't do a great job in the role. In fact, after the long slog that the movie takes to finally find Deckard (he's been holed up in a casino in radiation-deserted Las Vegas), he's a breath of fresh air. But Deckard isn't given a whole lot to do other than vaguely talk about his past. Even when it comes to the movie's big climax, the character of Deckard is immobilized so he's more of a witness than a participant. Even the question of whether the character is, in fact, a replicant himself (a debate that's gone on for the last 30 years), is never answered, as the movie punts on the topic, having one character raise the question and only get the response from Deckard that he "knows what is real."

Blade Runner 2049 spends a lot of time having "K" pondering his place in the world and questioning his own humanity. He has a relationship with a computer-simulated woman named Joi (Ana de Armas) that helps emphasize the movie's theme of what it really means to be human. While there's nothing wrong with a science-fiction film focusing on a cerebral theme like this for the majority of its run time, the problem here is that these questions were already tackled in the first Blade Runner, and I'm afraid the follow-up doesn't have a whole lot new to say or ponder.

All of the above may sound like I hated Blade Runner 2049. I didn't. It's a good movie, but that's all it is...good. It's beautifully shot (will someone please give Roger Deakins an Oscar?!), solidly directed, and with some nice performances (Gosling and Ford being right at the top of the list). But it's nothing new. It reintroduces us to the Blade Runner world, but it doesn't really expand things in any meaningful way. It doesn't answer any of the questions we were left with back in 1982, nor does it provide any new ones to mull over. As a result, it's a lesser movie than 1982's Blade Runner, albeit one that is still worth picking up and checking out, particularly in the 4K format.

Blade Runner 2049 replicates onto home video with this 4K Ultra HD/Blu-ray/Digital HD combo pack. The 4K disc and 50GB Blu-ray disc are housed inside an eco-friendly black Elite keepcase along with an insert containing a code for a digital copy of the movie (note: I was able to redeem mine on Vudu for an UHD version, but one's mileage may vary depending on the redemption service they use). A slipcover with artwork matching that of the keepcase slides overtop. There are no front-loaded ads on the 4K disc, but the Blu-ray does contain a single ad for the video game "Blade Runner: Revelations." The menu on both discs is the standard Warner Bros. design, with a still of the box cover image and menu selections across the bottom of the screen.

Blade Runner 2049 was shot digitally on Arri Alexa cameras and this transfer is taken from a 4K digital intermediate, which means that this is a "true" 4K presentation (many titles have been up-converted from a 2K intermediate) that viewers are getting with this release. The movie is presented in the 2.40:1 aspect ratio, which is pretty much identical to it's 2.39:1 original (non-IMAX) theatrical presentation. Blade Runner 2049 was also "blown up" and re-framed at the 1.90:1 aspect ratio for presentation in IMAX theaters. That aspect ratio is not an option here. None of this movie was actually shot using IMAX cameras, so it was just the ratio that was changed for IMAX theater presentation. Blade Runner 2049 also got a 3D post-conversion for theatrical release, and that version is available on Blu-ray (the 4K format doesn't support 3D), but not part of this release...you can find it at a few online retailers, although cinematographer Roger Deakins has publicly stated that he prefers people don't see the 3D version of the movie at all - as he didn't shoot it with 3D in mind.

As those of you in the 4K Ultra HD world are probably already aware, a 4K presentation isn't nearly so much about the detail (although there is an added boost from Blu-ray, it's not always visibly noticeable) as it is the application of HDR (high dynamic range), which provides an added boost to contrast and color. As expected, given the visual palette of Blade Runner 2049, HDR is the main reason you'll want to pick up this movie in 4K. The colors are deeper, brighter, and add a wonderful texture to viewing the movie. Facial details are remarkable here as well, showing every crease and crack in the actors' faces, particularly the now weather-beaten appearance of star Harrison Ford. Black levels are inky deep, and I detected no glitches or problems in the 4K transfer, which is, quite simply, reference quality.

The featured audio here is a Dolby Atmos track (contained on both the 4K and Blu-ray discs and which down-converts to 7.1 DTS-HD for those without an Atmos setup) that, like the video, is also reference-quality stuff. It's a fully immersive experience with deep, booming LFE activity, swooping overhead action (for those with an Atmos home theater), and lots of surround fun. Dialogue is crisp throughout, and properly mixed with the rest of the aural experience. There are no glitches to be found on this perfectly-rendered track, which - combined with the stunning visuals - provides for a very entertaining viewing experience. 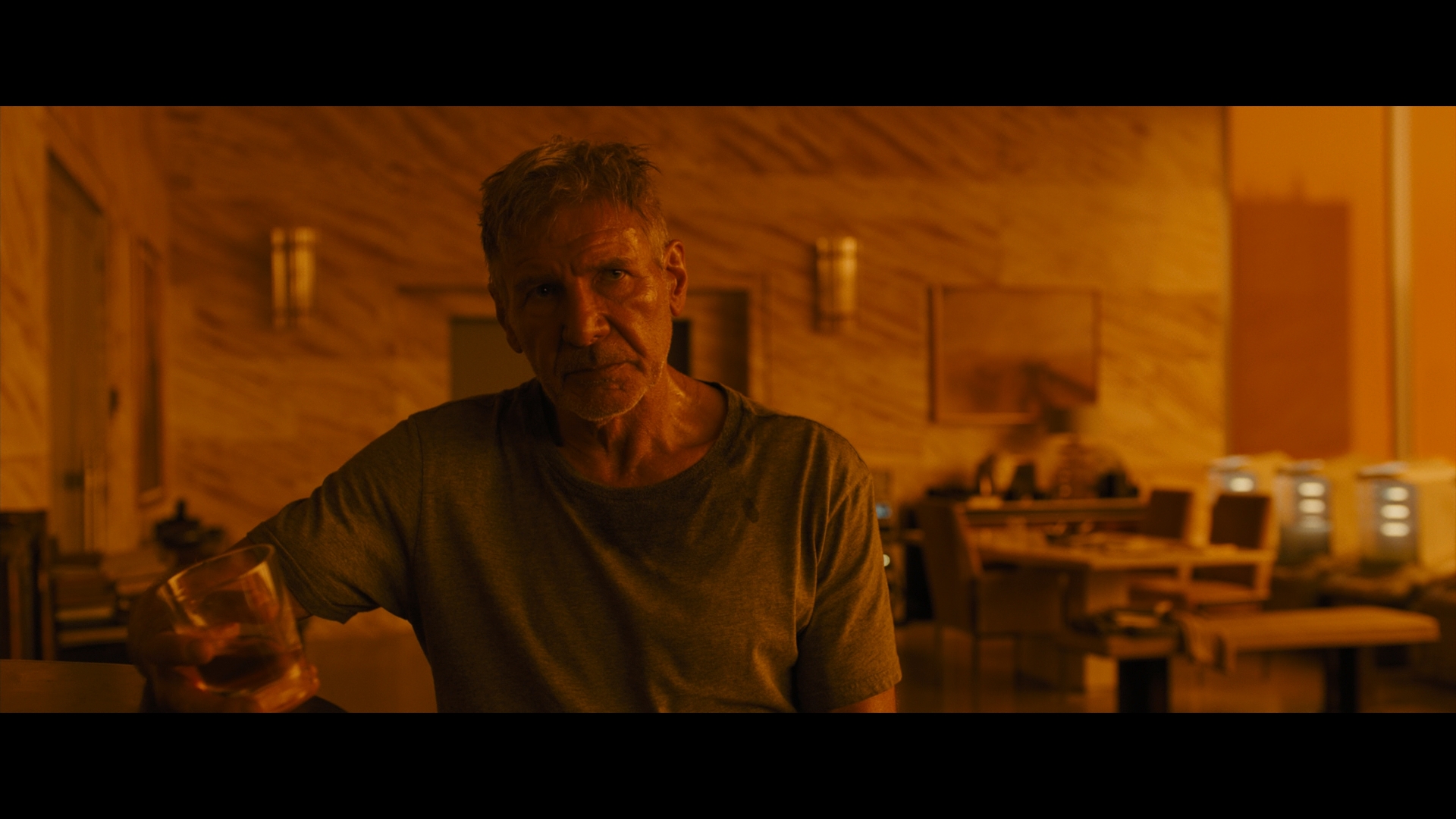 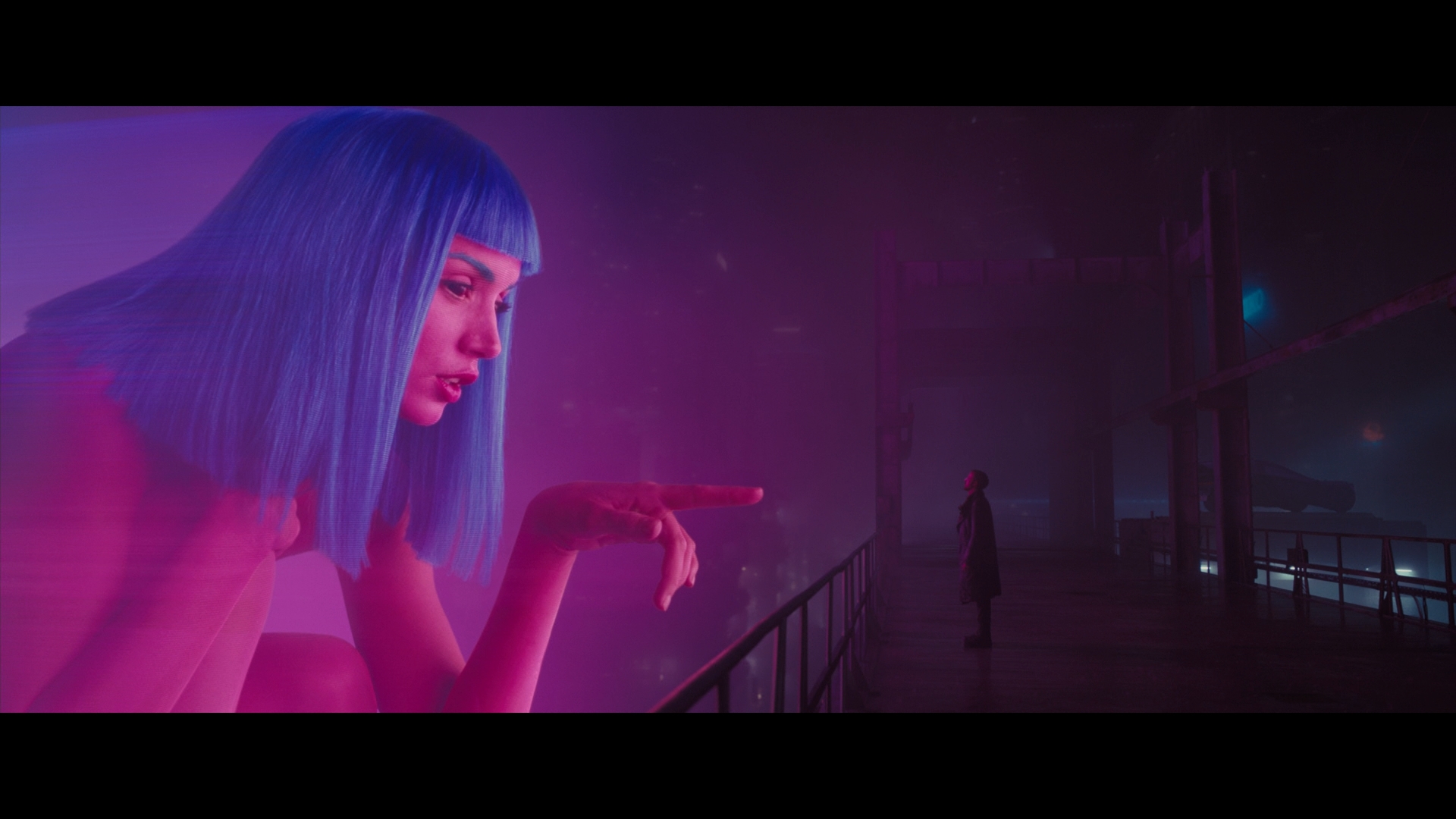 Blade Runner 2049 is a good movie...but it's far from the "masterpiece" many have made it out to be. While the visuals (and the soundtrack that accompanies them) are dazzling (particularly when seen on this 4K release), this sequel/reboot to the 1982 cult classic doesn't really cover any new ground, nor does the story justify the nearly two-hour, 45-minute run time. However, Director Denis Villeneuve does deserve credit for providing a big-budget science-fiction film that is more concerned with its main character's questions about his own humanity than it is about staging big action sequences. So even though I don't think the movie fully succeeds, it's still one that is Recommended, particularly in the 4K format.