Kino // PG // February 6, 2018
List Price: $29.95 [Buy now and save at Amazon]
Review by Stuart Galbraith IV | posted January 31, 2018 | E-mail the Author
An unexpected delight, The Wilby Conspiracy (1975) works wonderfully on all levels. As a chase-thriller, the picture is strong with several amusing twists, much humor, and charming performances by the entire cast.

Beyond that, however, what really surprises is the film's political content. Set in South Africa at the height of apartheid, the Rodney Amateau-Harold Nebenzal script (from Peter Driscoll's same-named novel) pulls no punches. It depicts racist policies against blacks (and whites that would help them) in starkly honest terms. Fifteen years later Hollywood began making a number of high-profile movies about apartheid - A Dry White Season, Cry Freedom, etc. - but those films were pat, clumsy and obvious. The Wilby Conspiracy, while chiefly a thriller, cleverly integrates the brutalities of apartheid into its plot in very direct, relatable terms, and even more surprisingly in scenes often laced with black or sardonic humor.

A good example of this happens early on, when fugitive Sidney Poitier, sadistically handcuffed so tightly that his wrists bleed and his hands go numb, suddenly has to urinate. (After years of torture, his bladder is no good.) Unable to unzip his own trousers he has no choice but to ask fellow fugitive Michael Caine to unzip him - and then take "it" out. Caine's incredulity, simultaneous with the humility Poitier's character suffers, makes the audience laugh and wince at once. Ironically, The Wilby Conspiracy may be the best movie ever made about the dehumanizing effects of apartheid. 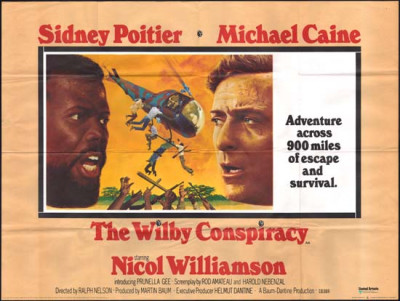 In Cape Town, after many years in prison, "Black Congress" (i.e., African National Congress) revolutionary Shack Twala (Poitier) is on a technicality released to the custody of his Afrikaner attorney, Rina van Niekerk (Prunella Gee). She suggests returning to her office for Champagne, accompanied by her boyfriend, English mining engineer Jim Keogh (Caine).

En route, however, the three are stopped by South African Police who demand to see Twala's identity papers. Rina tries to explain that as Twala, having just released from prison has no papers to give them, but the police violently beat and handcuff him anyway. When she tries to intercede they knock her to the ground, prompting Keogh to attack the police in self-defense.

Suddenly fugitives, Keogh and Twala make a break for Johannesburg in Rina's car, while she plans to fly down there separately. She's detained and questioned by Maj. Horn (Nicol Williamson) of the South African Bureau of State Security, who soon also plants a homing beacon in the fugitives' vehicle. Horn is aware that Twala plans to retrieve from Indian dentist Dr. Anil Mukarjee (Saeed Jaffrey) uncut diamonds he's hidden on behalf of the ANC's leader, the mysterious Wilby.

Directed by Ralph Nelson (Lilies of the Field, Charly), The Wilby Conspiracy is nearly a total success. Echoing slightly Poitier's earlier The Defiant Ones, the pairing of Poitier, as a man terrified of being re-imprisoned and tortured yet determined to remain free and able to look at his situation with humor, with Caine, whose English tourist gets a lot more than he bargained for and appalled by the treatment of blacks, strike a perfect balance. In another scene Twala graphically describes how he was tortured by white authorities that electrocuted his scrotum, yet his simple description is somehow more effective than in conventional later films about apartheid, that would actually dramatize such torture. The balance works because apartheid is integral to the plot but it isn't the story. It drives the narrative here and there, but neither does it wear its heart on its sleeve.

The picture similarly strikes a perfect balance between the humorous and the harrowing. A tense scene with Rina has her surrounded by authorities after several hours of questioning. There's a reference to an invasive, humiliating body search, and threats of another, even more invasive one. Yet moments like these are balanced with some wonderfully evocative, amusing bits, like Keogh hiding out in a (segregated) Indian cinema exhibiting some ancient musical, or a believable yet funny car crash that inadvertently reveals another tragic bit of state-sanctioned violence.

The supporting characters are great. The late Saeed Jaffrey, so wonderful with Caine in The Man Who Would Be King that same year, plays a politically radical dentist so committed to the Black Congress he fails to notice that his gorgeous wife (Persis Khambatta, several years before Star Trek) engages in an impromptu tryst with sex-starved Twala or that she wants to keep the diamonds for herself. Rutger Hauer, in his English-language film debut, plays Rina's shady pilot husband, forced into the middle of the action.

Best of all is Nicol Williamson, here an atypical heavy for such thrillers. Profoundly racist and nationalistic, he's also weirdly calm, collected, articulate and even charming, unshakable even during the picture's brutal climatic scenes. (What I'd give to have been able to see the picture in 1975 with a predominantly black audience. I imagine they loved the picture, laughing and cheering throughout.)

The movie was produced by, of all people, ‘40s actor Helmut Dantine, immortalized in Casablanca as the young married who wins exit visa money for he and his wife at Rick's crooked roulette table. In the ‘50s he turned to producing, eventually through his own company making two of Sam Peckinpah's films, Bring Me the Head of Alfredo Garcia and The Killer Elite. In this Dantine has a small role as a prosecuting attorney.

Obviously, the film could not be made in South Africa, and instead was shot chiefly in Kenya.

Previously released to DVD way back in 2004, Kino's new Blu-ray of The Wilby Conspiracy looks great, bright and sharp with excellent color and no signs of damage. The DTS-HD Master Audio 2.0 mono audio is strong, bringing to life Stanley Myers's score and the film's use of South African township music years before Paul Simon's Graceland album. English subtitles are provided on this Region "A" disc.

No supplements, just trailers for other movies starring Poitier or Caine.

Some sources suggest The Wilby Conspiracy had an only limited release in the U.S., and today it's neither particularly remembered nor highly praised by those who've reviewed it recently. But they're wrong: it's a near-great film unfathomably underrated, and a DVD Talk Collector's Series title.