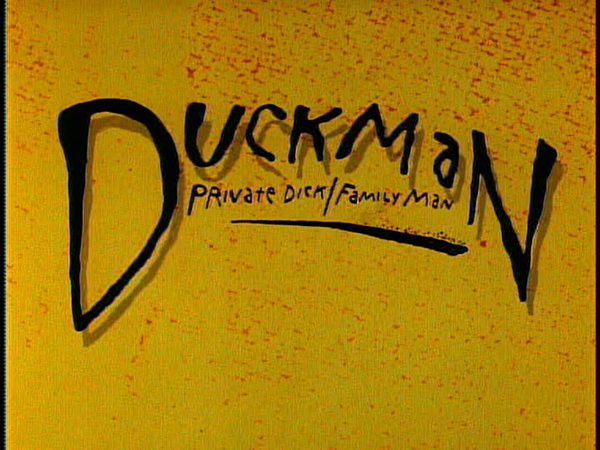 
The Story So Far...
Duckman (voiced by Jason Alexander) is an altogether awful person, whose sole focus is his own unlimited libido. That self-absorption creates unending pain and suffering for his family--including his two-headed sons Charles and Mambo, his dim child Ajax and his dead wife's sister Bernice--and his one friend, Cornfed Pig. Duckman ran for four seasons on USA Network from 1994-1997, and was released on DVD in a pair of two-season box sets in 2008 and 2009, DVDTalk has reviews of both sets.

The Show
It's no secret to anyone who has known me or read a good deal of my writing, but I am no fan of Seinfeld, as I find it hard to enjoy spending time with selfish, awful people like the four main characters, particularly Jason Alexander's mostly-irredeemable George. The creators of Duckman were obviously looking to capture some of that "magic" in casting Alexander as the voice of the titular duck, and he brought that elements in spades, as Duckman is somehow even worse, yet somehow also more enjoyable. Perhaps it's the effect of all that awfulness coming from a cartoon duck, but Duckman beats George every time.

The show follows Duckman, a poor excuse for a private detective, as he makes the lives of those around him miserable during his never-ending hunt for a woman willing to put up with his nonsense, at least for as long as it takes for him to be sexually satisfied. He's got two and a half sons (one child has two heads) but he's barely a presence in their lives, as his far more responsible sister-in-law Bernice (Nancy Travis) has taken over as caregiver following the death of Duckman's wife. At work (if it can be called that), his pig partner Cornfed fills in as Duckman's better half, solving the cases Duckman never could and counteracting his worst impulses and decisions.

Each episode is standalone, though there are callbacks, running gags and character development, which makes the show more rewarding as the seasons move forward. There's no such thing as an average Duckman episode, as the show was barely constrained by the idea of what a sitcom is, what a TV show is or generally what reality is. You could have an episode following a case Duckman and Cornfed are working or one where Duckman becomes an evangelical after a near-death experience. Though cases tend to be at least an entry point early in the show's run, that falls to the wayside later on, with the focus falling more on the family dynamic or some flight of fancy, like Duckman increasing in size depending on his level of rage. Similarly, early episodes are heavy on social and political commentary, touching on topics like religious hypocrites, class warfare and medical profiteering, but that becomes more of an undercurrent in later seasons. That's unfortunate, because the show could be very pointed in its criticism, and a lot of the points it was making are still--also unfortunately--hugely valid today. If not for the ever-present references to ‘90s pop-culture figures and subjects, the show could air today and feel relevant. 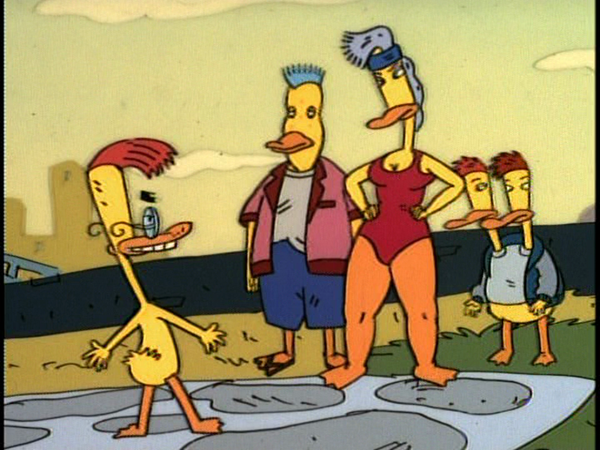 One of the elements that makes Duckman so unique and enjoyable is its willingness to embrace its status as an animated series and take advantage of the possibilities that being a cartoon provided. Art styles (including the striking, angular default look adapted from creator Everett Peck's original work) were experimented with, genres were mixed, live-action segments were tried (featuring Wings, Leeza and even Leonard Nimoy) and surreality was explored. There's not much the show wouldn't try, introducing musical episodes (doing a Road to.. homage years before Family Guy would make it a staple of that series), full-episode parodies of popular show like Cops, Star Trek and Law and Order and fourth-wall-breaking meta comedy that indicated the characters knew they were on a TV show, and behaved accordingly.. The results recalled the Looney Tunes married to a more adult mindset, and set the stage for the shows that would become [adult swim].

Led by Alexander's extreme bravado, Travis' versatile turn as Bernice and Gregg Berger's take on Jack Webb as Cornfed (not to mention a delightfully mellow Dweezil Zappa as Duckman's son Ajax), the cast is fantastic, with tons of animation vets appearing in a variety of roles, including E.G. Daily and Pat Musick. The guest cast of Duckman is simply loaded with recognizable performances, with names like Tim Curry, Gilbert Gottfried, John Astin, Eddie Deezen, Judith Light, Brian Doyle-Murray, Maurice LaMarche, Bobcat Goldthwait, Eugene Levy, Laurie Metcalf, Burt Reynolds, James Brown...the list just goes on and on. If an actor had any level of success in the ‘80s or ‘90s, there's a good chance they appeared on this show.

As enjoyable as the show is, with its surprising ability to blend ridiculous tales of outrageousness with a few genuinely touching moments, it's got problems, the kind that may not have been as evident when the show first aired some 20 years ago. Anyone would notice how sexist the show could be, with its exaggerated depictions of female physiques and sexually-available women--even if Duckman and his misogyny aren't exactly celebrated by the show, but the show also has a homophobic streak that's very off-putting at this point in history. Again, considering the overall tone and politics of the show, you'd like to think that these elements are just examples of a less "woke" time, but that doesn't make them any less awkward to watch. 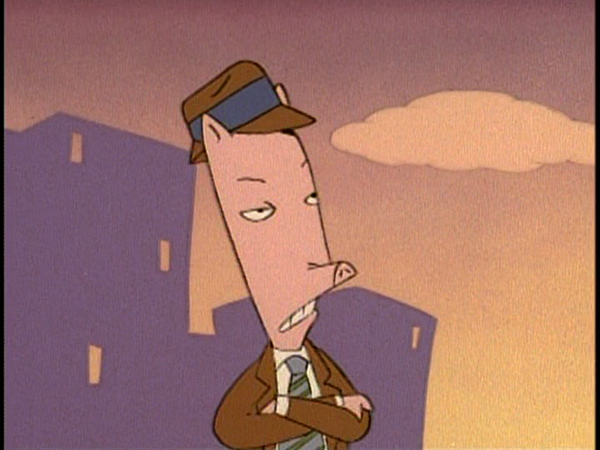 The Discs
The 70 episodes of Duckman are spread over 10 DVDs (the same set-up as the original sets) but this time they are all packed together in a clear double-width keepcase with four dual-hubbed trays. The animated, anamorphic-widescreen menus have options to play all the episodes, select shows and check out the extras (where applicable), with audio clips that play on each transition. There are no audio options and no subtitles.

The Quality
Presented with the same column-boxed 4:3 transfers from almost 10 years ago, this show doesn't look great. From a distance or on a small enough screen, you won't have any issues with the show's detailed, color-saturated animation, but blow things up or get close and you'll notice some excessive aliasing and some noticeable artifacting. Some dirt and damage can be spotted, but for the most part the image is pleasing, even if it doesn't hold up to scrutiny, the result of a lack of polish on this presentation. Keep your expectations low.

The Dolby Digital 2.0 tracks on these episodes do a fine job of delivering the show's dialogue and music without distortion, though a few episodes have an odd and inconsistent hiss on them (as if it originated with certain actors' recordings.) The music, including that iconic Frank Zappa theme song, comes off very nice, and there's actually some slight differentiation at points between the channels. No one will confuse this show with a modern series, but there's nothing about the audio that greatly affects the show.

The Extras
There's nothing new in this set in terms of extras, but at least everything from the previous releases in included here. "I, Duckman", the show's first episode, is presented with commentary from Peck and Alexander. It is quickly clear that Alexander is an excellent moderator, prodding Peck for information about the series, which the artist provides readily.

A quartet of office-set promos for the show runs 1:32 and introduces the new character to audiences before the show's premiere. Catching a glimpse of the old-school USA logo has plenty of nostalgia value all to itself.

Disc two offers up a trio of extras, starting with the 29:46 "What the Hell Are You Staring At?: A Special Investigation Inside Duckman, Private Dick/Family Man," which includes interviews with all the main players, with Peck, executive producers and writers Jeff Reno and Ron Osborn, Alexander, Berger, Travis, Daily, Musick, Details are delivered in large amounts, as they talk production process, character creation and trivia about the series. It's a perfect look back for fans of the show, recorded about 10 years after the show ended.

Continuing the theme of very long titles is "Designing Duckman: Inside the Creation of an Anti-Hero from Comic Book Character to Screen Star", which runs 12:54, and features Peck, Reno and Osborn as they talk about the crafting of the show's main character's look and personality.

Wrapping up the extras on this disc is "Six Degrees of Duckman", which lets you select from eight of the show's most prominent characters, with a bio, loves and hates and a video clip for each. It's worth a look for the clips, but it's not a feature you'll revisit.

On the final disc you'll find the remainder of the bonus features, starting with the 15:44 "Video of the Original Animatic Drawings and Animation from the Unaired Pilot with Everett Peck and Greg Berger." A compilation of footage and drawings from the unaired pilot with commentary from Duckman's creator and the voice of Cornfed (who occasionally appear on-screen) as they discuss the origins of the show and the characters, while also touching on the show's success and how they approached topical comedy. It's a nice, compact primer on the show's history,

"Walk Cycles, Expressions and Pencil Tests" (1:15) is just what its title says--a reel of rough sketches showing how the characters move and react. There's also "Selected Storyboard Scenes from "I, Duckman" (2:59) which are presented with music and some sound effects. This stuff is strictly for animation die-hards.

On the Hunt
An easter egg is easily found on the final disc, offering a brief clip of Peck creating a large-scale image of the star of the show. 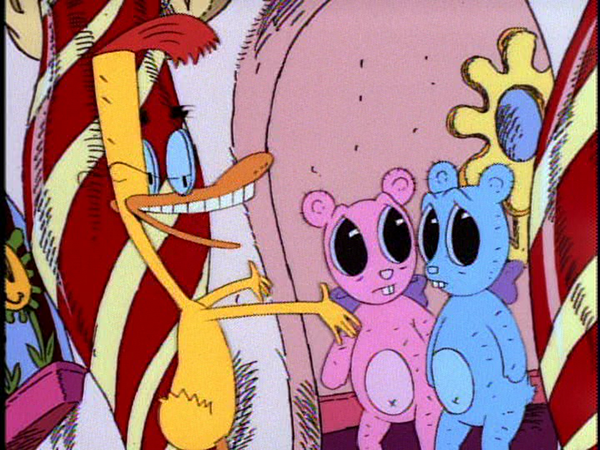 The Bottom Line
Before revisiting these episodes, I couldn't have told you much about the now 20-year-old Duckman series, aside from generally positive memories of it and its unique art style. Plowing through four seasons, the show holds up remarkably (and, in some cases, depressingly) well, despite the main character's rampant sexism and misogyny, and a general tone of homophobia. Assign those elements to a less-enlightened time and you can certainly enjoy the show's exploration of the possibilities inherent in animation and an anarchic sense of humor. Unfortunately, the show doesn't look great on DVD, and the sound isn't going to impress anyone, but the extras included with the original box sets return in this new repackaging, which--at a very reasonable price--is very easy to recommend for anyone who came of age in the ‘90s or who enjoyed the show during its original run.