Kino // Unrated // February 6, 2018
List Price: $29.95 [Buy now and save at Amazon]
Review by Stuart Galbraith IV | posted February 6, 2018 | E-mail the Author
The Way West is not a good Western, nor a particularly good movie generally. The dialogue, apparently an attempt to capture 1840s syntax, is particularly stilted and unnatural. The acting is uneven and two of the three main roles are miscast. Based on A.B. Guthrie, Jr.'s Pulitzer Prize-winning novel of the same name, published in 1949, the movie plays like a 1949 Western rather than a 1967 one, old-fashioned, corny even, and way out of step with where the genre was moving at the time.

Conversely, other qualities make the film worth seeing. William H. Clothier's cinematographing, aided by Albert Whitlock's matte paintings, is often breathtaking, among the best ever done for a Western film, and the Blu-ray offers a superb transfer accentuating the picturesque locations. The supporting cast mixes familiar genre faces like Jack Elam and Harry Carey, Jr. with some surprises, including a baby-faced Sally Field in her movie debut. Reportedly budgeted at $5 million, the movie looks expensive and has several big action set pieces, and a couple of worthy dramatic moments. 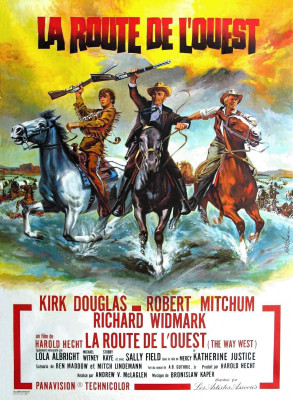 The story opens in 1843, as a wagon train bound for the long journey across the Oregon Trail, prepares to leave Independence, Missouri. (In long shots, Independence seems to consist of just a few buildings. One suspects a Whitlock matte painting was planned but never completed.)

They encounter the usual hazards wagon trains encounter in such films. At a river crossing one man (Nick Cravet) drowns because of a hidden money belt weighing him down. On the plains they run afoul of Sioux Indians, especially after a drunken Johnnie accidentally shoots the youngest son of the chief, mistaking him for a wolf. In the film's only outstanding scene, Tadlock metes merciless trail justice when the chief (Mike Lane) demands it or suffer the consequences.

One of the top-grossing movies of all of the 1960s was How the West Was Won (1962), an old-fashioned "greatest hits" of genre tropes mainly designed to showcase the wonders of Super Cinerama, the three-camera/three projector process. That movie was wildly popular, in theaters for years thereafter, but The Way West is about the only Hollywood feature that seemed to consciously emulate its old-fashioned west-winning spirit, albeit it in ordinary Panavision. Even some of the posters (see above) emulated the How the West Was Won look.

Unfortunately, The Way West's script isn't any better than HTWWW, which is a good movie when seen in Cinerama, not so good on ordinary TVs. The Way West's archly written dialogue is one of its many problems. Some of the actors obviously struggle with it, and most of the time it seems unnatural and clunky, even if it captures certain period syntaxes.

Kirk Douglas and Richard Widmark might have been better had they switched parts. It's easy to imagine Douglas playing the hard drinking, boisterous rambler but not Widmark, while it's easy to imagine Widmark playing the wealthy, driven ex-senator unhesitatingly cruel and ruthless in achieving his goals. Robert Mitchum, on the other hand, was an actor who gave great performances when he believed in the part, and merely good ones in projects he didn't much care for. Audiences got the latter Mitchum in this case; he's not bad, but it's also clear from the get-go he's not really committed.

On the other hand Sally Field, far more than Katherine Justice (both of whom get "Introducing" credits), really glows in her substantial part. Like everyone else in the film, she's stuck with a genre stereotype, the backwoods "bad girl" in love/lust with the handsome, straight-laced greenhorn, but Field makes it memorable.

Vying for her affections is Michael McGeevey's Brownie. McGreevey had done lots of TV work from the late 1950s but mainly became associated with Disney films and TV shows, most memorably as Kurt Russell's best pal in Disney's three "Dexter Riley" sci-fi comedies (The Computer Wore Tennis Shoes, The Strongest Man in the World, and Now You See Him, Now You Don't). I related to McGreevey's slightly nerdy, awkward but loyal character rather than Russell's extroverted, impetuous one, and McGreevey himself was a very likeable, convincing actor, even in those goofy fantasies with their broad slapstick. In The Way West he, like Field, is onscreen as much as the three leads, and his gentle Brownie seems more real than most of the other characters.

The rest of the cast does what they can with their clichéd parts. Jack Elam turns up as a wild-eyed (natch) preacher-stowaway; Connie Sawyer has a bigger-than-usual part as Field's mother; in small parts Patric Knowles, William Lundigan, and genre favorites Peggy Stewart, Roy Barcroft appear, while Sam Elliott makes his feature debut, uncredited and unrecognized, at least by me.

Originally a United Artists release licensed to Kino from MGM, The Way West looks razor-sharp except during dissolves and fades, when the image suffers only slightly. The vistas as the wagon train rolls along really look outstanding, especially on big screens like my 90-inch projection system. The DTS-HD Master Audio mono audio is robust for what it is and English subtitles are provided on this region "A" encoded disc.

Supplements are limited to trailers for this and other related titles.

Not a good film but definitely worthwhile for other reasons, The Way West is Recommended.