Kino // Unrated // January 9, 2018
List Price: $29.95 [Buy now and save at Amazon]
Review by Stuart Galbraith IV | posted February 19, 2018 | E-mail the Author
As romantic melodrama, Intermezzo: A Love Story (1939) has dated badly. The film is awfully corny by contemporary standards and maybe even the standards of 1939, even incorporating the deus ex machina of a suddenly critically injured child at the climax to patch up a seemingly hopeless dilemma.

The picture is mainly remembered today for a couple of reasons, first and foremost because it marked the American screen debut of Ingrid Bergman, just 23 years old at the time and positively luminous. She had starred in the original, 1936 version of the film, Intermezzo and appeared in about ten other movies in her native Sweden before producer David O. Selznick brought her to America.

Less significant but still interesting is that in the picture she and star Leslie Howard play virtuoso musicians, and the ingenuity showing him at the violin and her at the piano is quite impressive and wholly believable. Also good is Gregg Toland's cinematography, while the production values, typical of Selznick's features, is first-rate. But, as a movie, well…. 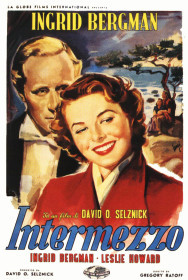 Celebrated violinist Holger Brandt (Howard) returns home to Sweden, reuniting with his wife, Margit (Edna Best), their son, Eric (Douglas Scott) and precocious, adoring young daughter, Ann Marie (Ann E. Todd). At a birthday party for Ann Marie, her piano teacher, Anita Hoffman (Bergman), is coaxed to play, and Holger, up to then barely taking notice of her, is suddenly mesmerized by her talent. He immediately insists she become his new accompanist on his next European tour, eve though she's still studying under master Thomas Stenborg (John Halliday).

Of course, Holger and Anita fall in love, and while on their fairy tale tour he's ready to throw away his years of marriage and fatherhood for his love of her. But it's clear he's feeling guilt for his shabby abandonment of Ann Marie especially, and she begins to question the wisdom of their decision to stay together.

What's most interesting about Intermezzo is watching Ingrid Bergman exhibit much the same moral conflict she expresses in her signature role in Casablanca (1942), just a few years later. Indeed, one of the faults of the film is that her performance is entirely naturalistic and heartfelt, while Leslie Howard's is of an earlier acting style already on the way out. At 46, Howard had been on the stage and in movies since the middle 1910s, his film career really taking off with the dawn of talking pictures, where his stiff upper-lipped Englishman was much in demand. He peaked in such movies as Berkeley Square (1933), The Scarlet Pimpernel, Of Human Bondage (both 1934), and Pygmalion (1938), and though acclaimed at the time, Howard's performances in those movies aren't particularly remembered today. Rather, he's best known for two films famous for other reasons, the film version of the play The Petrified Forest (1936), in which Howard famously and generously insisted struggling actor Humphrey Bogart; and Selznick's Gone with the Wind (1939). After returning to England near the start of the war, Howard died unexpectedly when the Luftwaffe shot down his commercial flight to Lisbon. Had he survived though, one wonders what sort of film career he might have sustained, as even by the 1930s a younger generation of British and American actors made Howard's reserved, carefully enunciated style seem quaintly unreal. I confess to not having seen the original Intermezzo or Bergman's co-star in that, but the contrasting acting styles here is striking and he inhibits its success.

Far more successful is the ingenuity in which the two actors playing is faked. Bergman could play the piano well enough that, on camera, she energetically nails the hand positions with complete believability even though a professional pianist overdubbed her playing. For Howard, who could not play the violin, a more radical approach was called for. A professional violinist resembling the actor positioned himself in such a way that he, rather than Howard, did all the fingering while Howard faked the bowing. The violinist also apparently doubled Howard in some long shots. All this is so well done the movie audience might reasonably assume both actors were also talented musicians.

The picture looks nice, with lavishly appointed sets standing in for its European locations, and it appears some stock shots were lifted from the Swedish version.

Filmed in black-and-white and presented in 1080p 1.37:1 standard size, Kino's Blu-ray of Intermezzo: A Love Story looks very good throughout, with sharp resolution drawing upon good film sources. The DTS-HD Master Audio mono is also fine on this region "A" disc, for which optional English subtitles are provided.

Supplements consist of an audio commentary by film historian Kat Ellinger and a trailer.

Worth seeing for Ingrid Bergman's memorable Hollywood debut and its handsome, sometimes ingenious production, less so for star Leslie Howard and the movie's hoary melodrama, Intermezzo is Recommended.