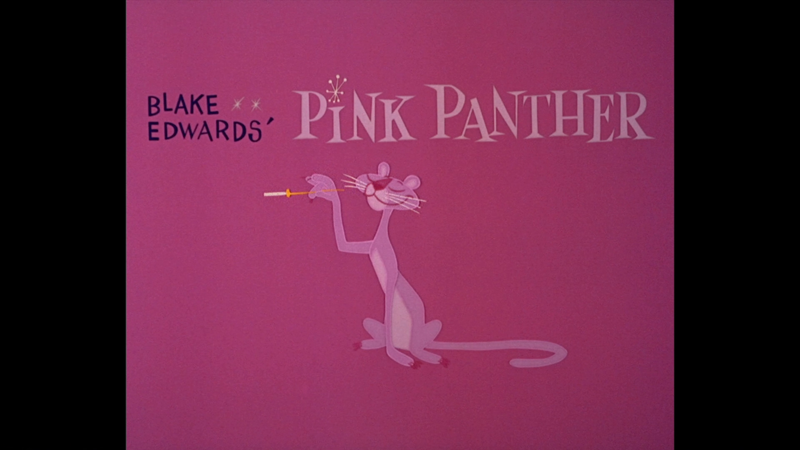 
The Movie
Making his mark in the opening titles of Blake Edwards' The Pink Panther, the sly feline became a recognizable screen star, and under the direction of legendary animator Friz Freleng made the jump to his own series of cartoon shorts, eventually starring in 124 in all. Though over the course of decades he has taken a backseat to more famous animated stars--better remembered by many as an insulation mascot--the Pink Panther certainly had his moments of glory, many of which are found in this set, which collects the first 20 shorts, created from 1964-1966.

Many of these shorts follow a similar story, in which the Pink Panther acts as an aggravating nemesis to The Little Man, a stout fireplug of a guy who is driven slowly insane by the Pink Panther's antics. Sight gags are the order of the day, as reality is warped and abused by The Pink Panther, and The Little Man can only get angrier. These shorts--including the Oscar-winning The Pink Phink, The Pink Blueprint and Pink Plunk Plink--are easily amongst the best of the set, as the rivalry adds to the comedy, much as it did in Freleng's Bugs Bunny/Elmer Fudd cartoons.

That said, the dynamic could and was changed in shorts like Reel Pink, which pitted the Pink Panther against some worms, and the great Pink Punch, where, in a bit of surreal lunacy, the Pink Panther does battle with a mischievous green asterisk, in a reversal of the color war seen in The Pink Phink. Casting the Pink Panther as the protagonist rather than the antagonist he started as could show his depth as a character, or it could be seen as another example of the way the early cartoons would try anything to figure out what works for the concept. Either way, it made for one of the best entries here. 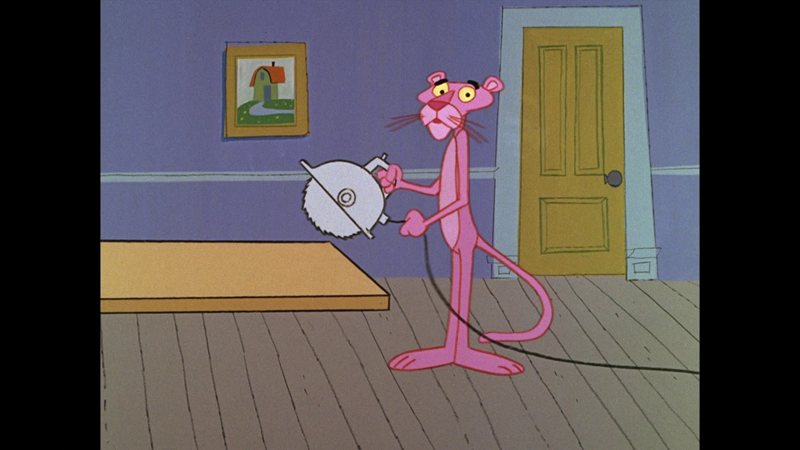 The "spaghetti against the wall" technique also results in a few shorts where the Pink Panther actually speaks (given voice by famous impersonator Rich Little, who is doing something akin to a James Mason voice.) Though it's not the only voice heard in these cartoons (there is at times a somewhat obnoxious narrator, and Mel Blanc can be heard as the voices of a miserable Lockhorns-style couple) it is extremely off-putting to hear the smooth cat speak, as he is best as a silent comic character in the vein of The Kid, M. Hulot and Mr. Bean. Thankfully, he is far more often seen than heard.

There are more hits than misses in this collection by a far margin, with just a few worthy of an outright skip--namely Pink Pistons and Vitamin Pink. But even with a high ratio of success, some shorts stand above the others, including the wonderfully surreal and visually inventive Pink Pajamas, in which the Pink Panther attempts to find a place to bed down for the night, and the previously mentioned Pink Punch, The Pink Blueprint and The Pink Phink. All are representative of how the show could combine minimalist and abstract backgrounds with smooth character animation to create great slapstick comedy and sight gags. There wasn't much the creators wouldn't try, including integrating live action footage, resulting in a cameo from Henry Mancini.

After watching all 20 shorts through, one continues to leap to mind, and it's surprisingly not one of the franchise's trademark Little Man battles. Instead it's Bully for Pink, a fun adventure that sees the Pink Panther channel his inner wascally wabbit in an attempt to become a matador (as Bugs did in the 1953 Chuck Jones short Bully for Bugs.) It's not a rip-off of the early cartoon in a very important way, as the Pink Panther inadvertently took a magician's cape to be his matador prop. The magical effects are put to great use as he faces off with the bull in the ring, and the Pink Panther displays all the qualities that made him an animated hero worth cheering for. 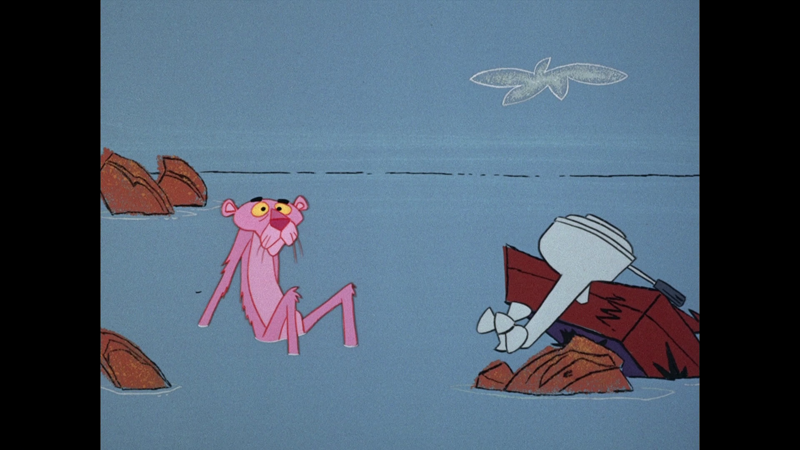 The Disc
The first volume of Kino's The Pink Panther Cartoon Collection features the first 20 shorts featuring the character, running from 1964 to part of 1966 (oddly leaving the final four shorts of that year for another volume, which will also include 1966 apparently.) The films arrive on one Blu-ray disc with a static menu offering a choice of shorts, a play-all option and the extras. The disc comes in a standard Blu-ray keepcase with a two-sides cover that had identical designs on both sides, with the exception of the background color, which is in royal azure or a more striking white. There are no audio options, nor subtitles.

The Quality
Usually Kino will note on the box when they are providing a new transfer, so one would assume these 1.33:1, AVC-encoded shorts are picked up from existing masters, and they look quite good, though if you're looking closely you'll notice some jitter and damage throughout (just never at a distracting level.) Color is bright and attractive, while the level of fine detail shows off the hand work in the animation, particularly in the often abstract backgrounds, where brushwork and splatter give style and texture to otherwise simple spaces. Overall, there's little to complain about with this image.

The 2.0 DTS-HD Master Audio 2.0 tracks are exactly what you'd expect for these kind of cartoons, as they ensure the music--including Henry Mancini's famed theme song--is strong and clear, along with the sound effects that punch home any number of gags. The occasional voices are appropriately prioritized in the mix, which, for the most part, is clean, though a few exhibit some unfortunate and obvious defects--including, unfortunately, the music-driven Pink Plunk Plink.

The Extras
The extras take the form of 14 new audio commentaries, available on an assortment of shorts, with two getting a pair of tracks. These commentaries cover most of the best entries in this set, with an assortment of participants with expertise in animation, including the always-welcome Jerry Beck, animator/historian Greg Ford and author Mark Arnold (as well as William Hohauser, a writer on Courage, the Cowardly Dog, who provides on track.) Some of the tracks integrate clips of Freleng himself talking about his work (which can be a bit tough to decipher), while Bob Kurtz, who wrote several of the shorts included here, sits down with Beck to provide his own perspective. Arnold leaves a surprising amount of dead air, considering the brevity of the shorts, but otherwise there's a lot of solid info and insight provided, including historical context and production details. 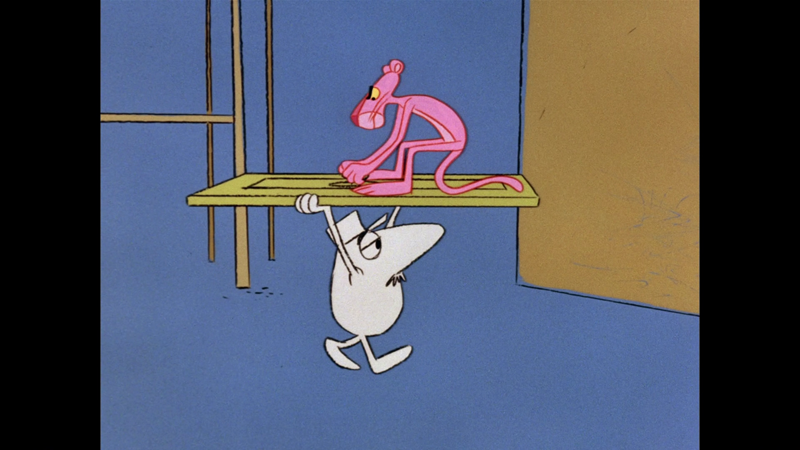 The Bottom Line
Though oddly selected--leaving out four shorts from the listed years--this collection delivers what may be the best of the Pink Panther, as the first 20 cartoons include many of his most memorable and most enjoyable adventures, like his award-winning debut in The Pink Phink, though there are a few forgettable outings in there as well. The presentation by Kino Lorber isn't exactly pristine, but it's still appealing, while the assortment of commentaries are both enjoyable and informative to listen to, adding value to the package. For animation fans, this is classic goodness that's well worth adding to your shelf.