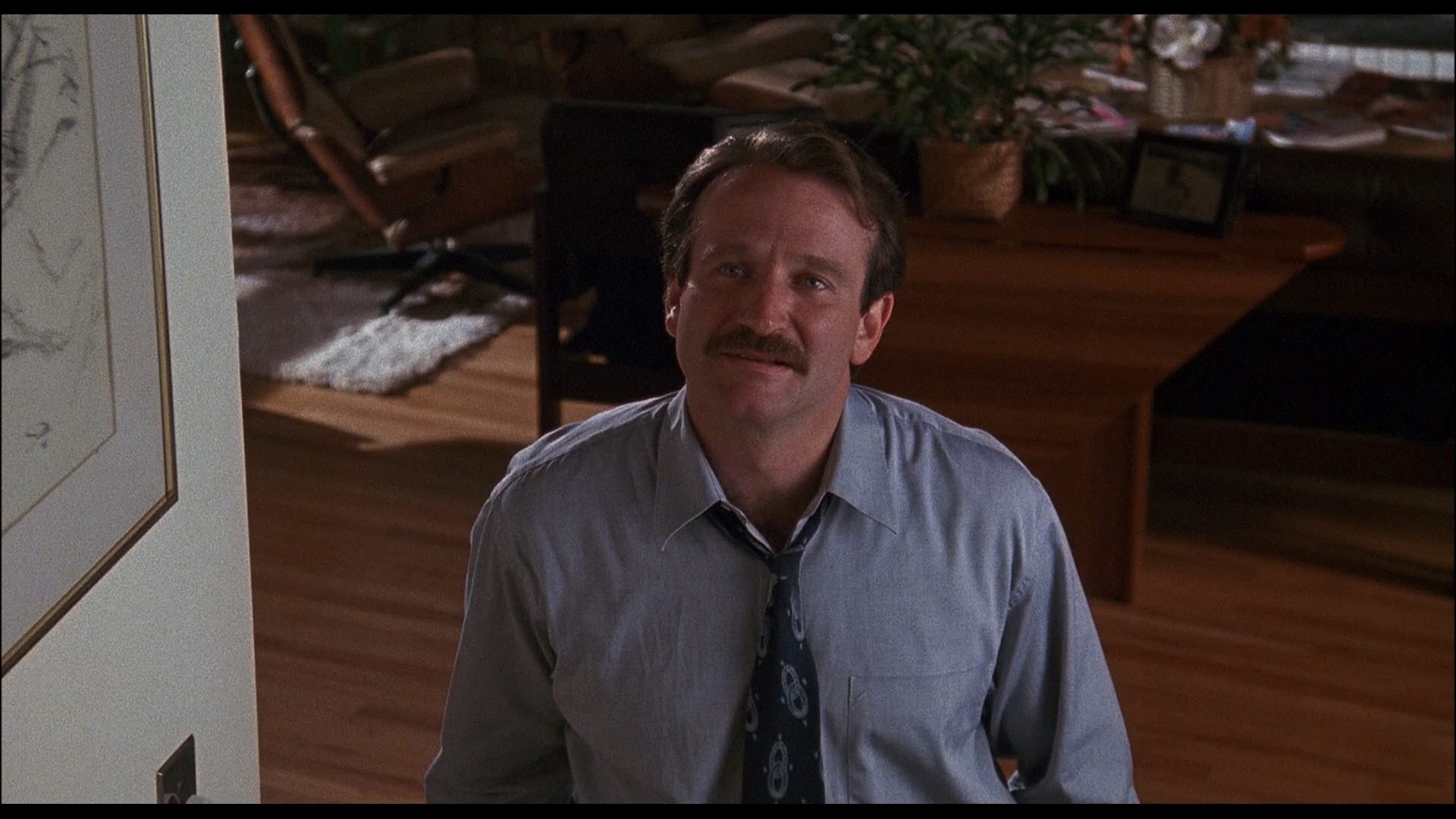 There's that old movie saying, "They don't make 'em like they used to." In the case of Cadillac Man, that's probably a good thing - not that any major studio would be likely to green-light a script similar to the one we find here in today's social environment. Not only does this black comedy feature a plot about a man with a automatic weapon taking hostages at a car dealership, but every major male character in this film is sexist to one degree or another, none more so than our lead character, car salesman Joey O'Brien (Robin Williams).

Joey is the stereotypical car salesman - a guy so desperate to make a sale, he'll give his business card to a widow at a funeral (which he does to Elaine Stitch in a brief cameo in the opening scene of the movie). If there's anything Joey's good at beyond selling cars, it's juggling relationships, as he has one going on with married woman Joy (Fran Drescher) as well as wannabe fashion designer Lila (Lori Petty). He still has feelings for his ex-wife, Tina (Pamela Reed), as well.

Things aren't going great at the dealership where he works. He's informed by co-worker Jack (the son of the owner, and played by Paul Guilfoyle) that they'll be moving to a new location soon and they can't take all the employees with them. There will need to be cuts, and only the best salesmen will make the move to the new dealership. The challenge: to sell at least 12 automobiles in a single day. Of course, when that day comes around, things go horribly wrong.

Joey isn't the only one messing around with multiple women. Jack is having an affair with co-worker Donna (Annabella Sciorra), and when her husband Larry (Tim Robbins) finds out about it, he arrives on his motorcycle. After crashing through the glass of the front window, he starts shooting up the place - taking everyone hostage in the process. Hoping to negotiate with Larry before anyone gets seriously hurt, Joey lies to him and tells him he's the one who has been sleeping with Donna. The remainder of the movie has Joey trying to talk sense into Larry, all while dealing with the police who arrive on the scene, led by Police Captain Mason (Anthony Powers, now known best as the "get the papers" guy from GoodFellas).

Cadillac Man is nothing if it's not manic. Big chunks of this movie feature the main characters screaming at each other - mostly either Williams's character getting chewed out by one of the women in his life or Robbins's character flipping out and firing his weapon indiscriminately. The film works best when it's just Joey and Larry talking about their problems in more quieter moments, but sadly the movie doesn't give viewers a whole lot of those.

A big mistake director Roger Donaldson and crew make here is waiting so long to get to the Tim Robbins portion of the movie. Donaldson feels the movie needs to establish Williams's character first, giving us scenes that contain voice-overs by him, as well as ones in which he talks directly to the camera/viewer. This needless exposition isn't really necessary and thankfully these bits are pretty much gone after the crisis at the car dealership begins.

Another problem with Donaldson's movie is that after 90 minutes of dark humor, he can't pull the trigger and give us what the movie calls for: a dark conclusion. No, instead he goes for the typical Hollywood happy ending, which not only doesn't work, it's not honest to the characters of this screenplay.

Cadillac Man won't be remembered among either Robin Williams's or Tim Robbins's best films, although it may hold some curiosity for fans of either (or both) of the actors, as it's far from their worst work, either. At best though, this release falls firmly in rental territory, as it's unlikely something you'll wish to watch more than once.

Cadillac Man has a deal for you on Blu-ray, arriving from Kino Lorber in a standard Elite keepcase. The single-layer 25GB disc is packaged alongside a 22-page full color booklet that features box covers (four to a page) of other "Studio Classics" releases. There are no front-loaded trailers on the Blu-ray, whose main menu features a still shot of stars Robin Williams and Tim Robbins against a white background with menu selections at the bottom of the screen. The opening credits song, "Snatch and Grab It" by Julia Lee, plays over the menu.

Cadillac Man was shot on 35mm film and is presented here in its original theatrical aspect ratio of 1.85:1. The transfer here is a lot more detailed and colorful than I expected and very little dirt and debris (or other problems like banding and aliasing) exist. The movie still has noticeable grain in the print, but the overall look is one that accurately displays what this movie looked like in theaters back in 1990. While still not a stunning transfer by any means, it's better than many Kino Lorber titles I've seen from the same period, so the source material must have still been in excellent shape.

The only audio track (other than the commentary track) on this release is an English 2.0 DTS-HD Master Audio track. While there's nothing showy about the audio, it is crisp and clear throughout, with no hints of muddiness and no apparent dropouts. Everything is properly mixed here and there's even a little "oomph" (well, as much as you can get from two speakers) when things like gunfire happen on the screen. Much like the video on this release, the audio isn't comparable to a recent big-budget title, but it's more than serviceable for a movie such as this one. No complaints here. 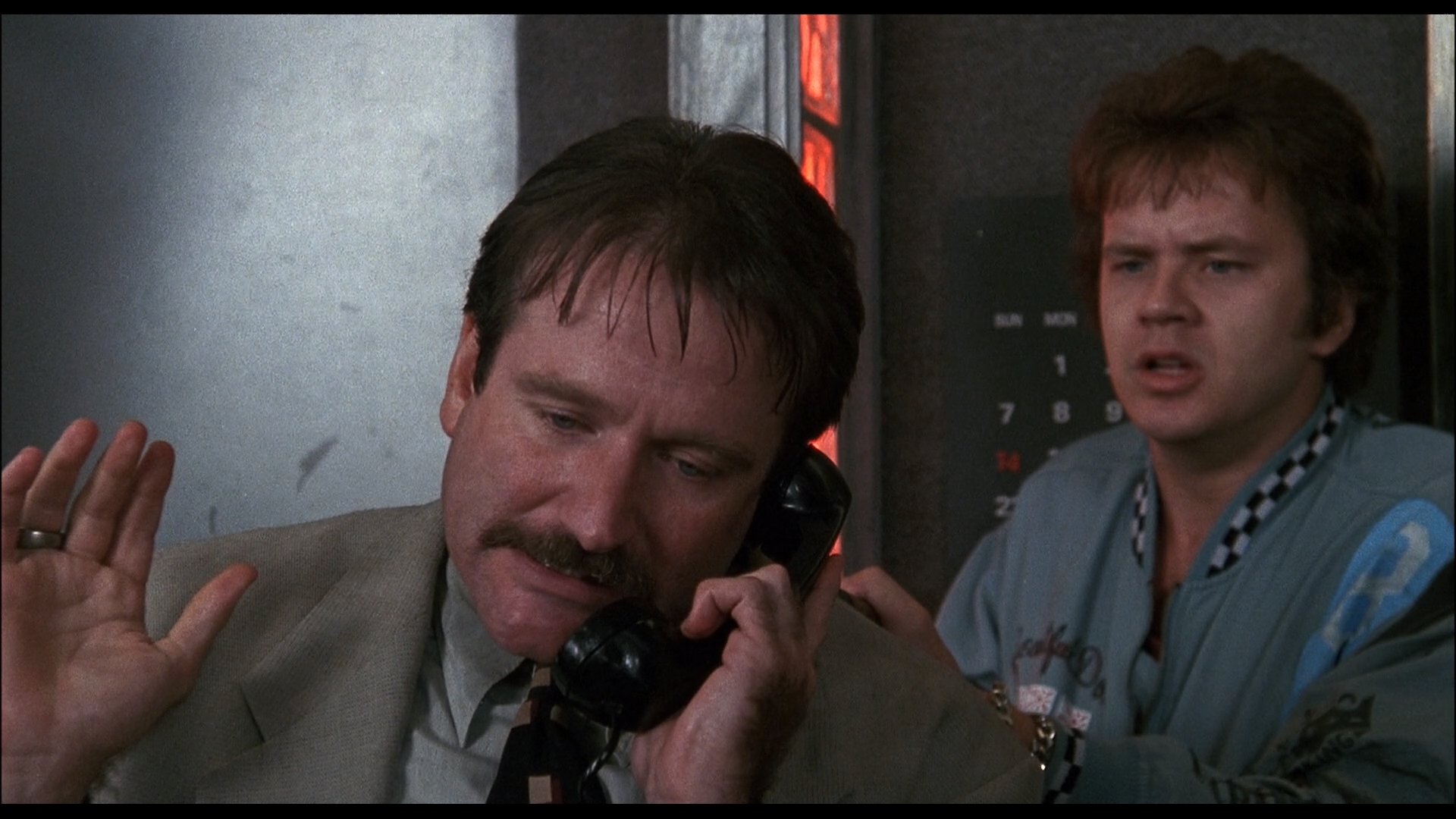 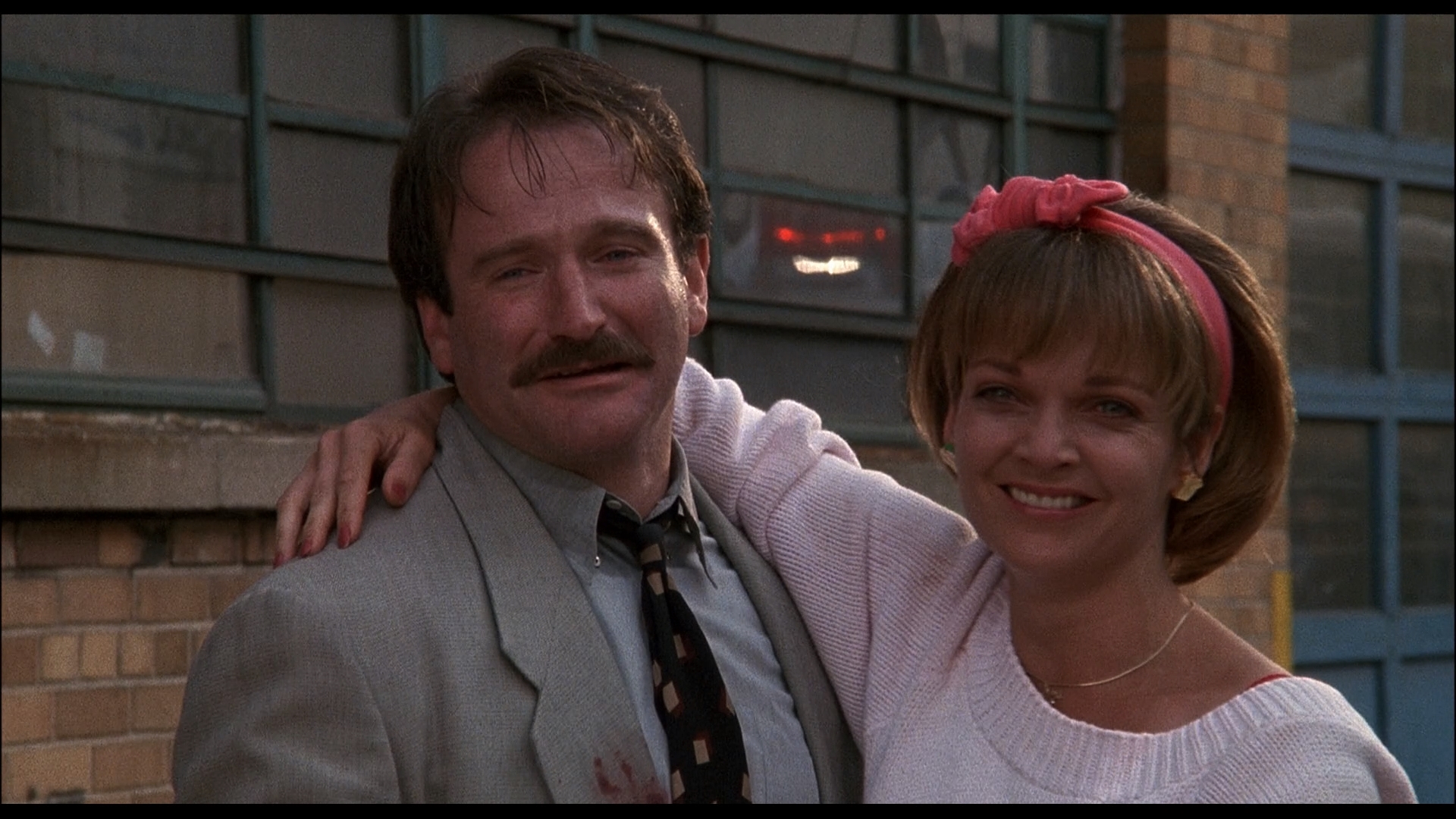 Cadillac Man wasn't a great movie when it was released back in 1990, and it hasn't aged very well. Still, parts of it are quite watchable, thanks in no small measure to the talents of stars Robin Williams and Tim Robbins. However, this release is probably something you'll watch once and never again, even if you're a huge fan of both the leads. If you do pick it up, be sure to give the commentary track a listen, as it's the highlight of this Blu-ray. Rent It.