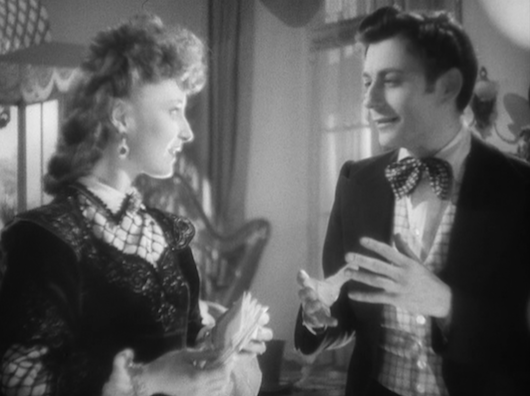 The four films in Criterion's most recent Eclipse set, Claude Autant-Lara: Four Romantic Escapes from Occupied France, are interesting for two historical reasons*. The first reason is right there in the title of the set: these films were made (or in the case of the last entry, conceived) during the Nazi occupation of France during World War II. Only escapist films that didn't comment upon the war were permitted to be made, which proved to be a balm to shell-shocked French audiences anyway. The second cause for notability is that director Claude Autant-Lara's handsomely mounted productions are exactly the kind of thing against which the Cahiers du cinema crew wanted to rebel, roughly a decade later. Seen now, there's much to appreciate in Autant-Lara's work, despite the lack of immediacy one associates with those later nouvelle vague flicks. 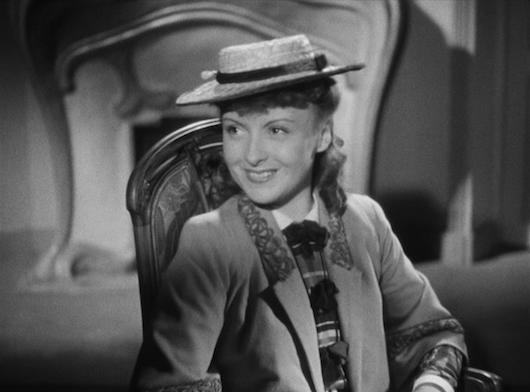 The first film in the Eclipse set is 1942's Le mariage de Chiffon (Chiffon's Marriage), which sets a template that the rest of the films tend to stick to, in one way or another: a period setting, plenty of would-be lovers at cross purposes, a certain amount of commentary on class divisions, and Odette Joyeux in the lead role as a headstrong young woman (frequently a 16-year-old, despite the actress being roughly 30 at the time).

Set at the turn of the century, Le mariage kicks off when Joyeux's Chiffon crosses paths with a middle-aged general (André Luguet) in the rain. The general suspects he has met the love of his life. Chiffon doesn't dislike the general -- he's a jolly and affable sort of chap -- but she has been nursing a decade-long crush on her step-uncle (Jacques Dumesnil), a misunderstood visionary who has thrown away his family fortune while trying to build a functioning airplane. Uncle has a lover of his own, and he constantly makes a point of treating Chiffon like a kid, but he secretly shares her deeper romantic affection. Le mariage is light and joyful, but it works better than standard romcom fare because it doesn't ignore the emotional heft behind its characters' feelings. Luguet's general is far from the sidelined Baxter of American romantic comedies; he's smart enough and he cares enough for Chiffon that he genuinely wants what will make her happiest, even if that means she disappears into the wild blue yonder with a bankrupt pilot. 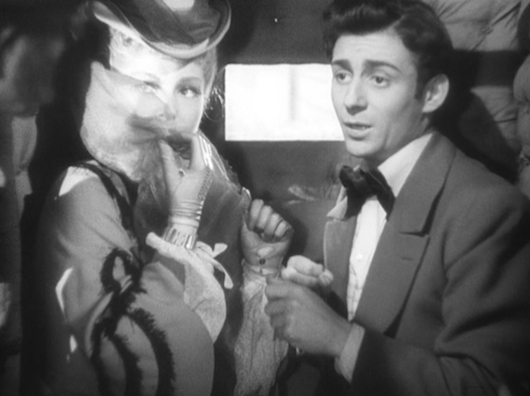 Next, we have Lettres d'amour (Love Letters), also from '42, which is the most blatantly farcical outing in the set -- and, not coincidentally, the most satisfying. This time, Odette Joyeux is Zélie Fontaine (great name!), a widowed postmistress of a small 19th Century town, whose youthful impudence rubs the town's aristocrats (dubbed the "Society") the wrong way. When a district attorney position opens up in town, the Society bigwigs try to get their man in the post, so they can oust Zélie from hers. However, the government has other ideas. The town prefect has embarrassed them, so they want to embarrass him back. Their plan is to send a prosecutor with the secret mission of seducing the prefect's wife (Simone Renant). The relatively upstanding François de Portal (François Périer) volunteers for the position, because -- oh boy -- he has already been carrying on a long-distance affair with the prefect's wife for over a year, which has just suddenly ended. François has been sending the titular love letters, signed "Hedgehog" (because of his fluffy hair), to postmistress Zélie, who acts as the go-between for the prefect's wife. (Zélie also reads the letters first, for a vicarious thrill.) Once he gets to town, François finds himself slowly forgetting about the prefect's wife and falling instead for Zélie (of course).

This brief synopsis of the set-up only lightly touches upon the full breadth of entanglements and complications that writers Jean Aurenche and Maurice Blondeau combine into this delightful soufflé. For instance, the wrangling between the upper-class Society and the working-class "Shop" for control of the town leads to an amusing subplot involving clandestine dance lessons in prep for an upcoming ball, with Jean Renoir regular Julien Carette as the over-worked and under-appreciated dance instructor. 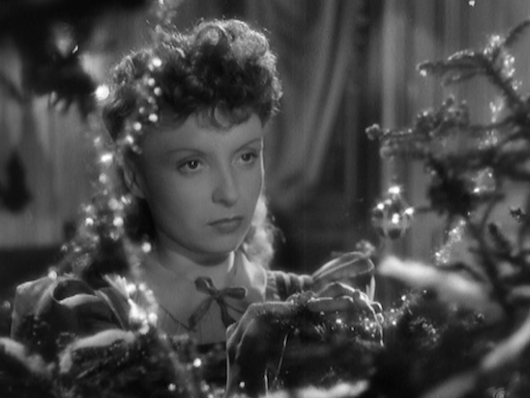 The only non-comedy in the bunch, 1943's Douce, is essentially a dark, melodramatic mirror-image of Le mariage de Chiffon. Douce (Joyeux) is an upper-class girl, in love with the man who takes care of the family horse stable (Roger Pigaut). When she reveals this desire to a priest in an opening scene, his immediate distaste for the man of low station, coupled with a prediction that Douce is "on the road to hell," is a sharp commentary on class relations and -- sadly -- foreshadowing for what the character can expect. There is a parallel star-crossed love story, with Douce's sweet but slightly pathetic single father (Jean Debucourt) in pursuit of the family's governess (Madeleine Robinson). The family matriarch, played with sharp-tongued, bitter humor by Marguerite Moreno, would not approve of any of this if she found out. Yes, eventually she finds out.

Odette Joyeux is magnetic and enchanting in the other films in this set, but Douce offers her an opportunity to bring a bit more shading to her role. In Le mariage de Chiffon, for example, one can see Joyeux trying to be girlish to create the impression that she is not yet a woman. But Douce, even though she is also just 16 years old, is allowed to own the full power of her feelings. Her sadness is more than just petulance; it comes from deep (and unfortunately, misguided) longing. I browsed some of the other online reviews of this set, and Douce comes up as many reviewers' favorite film in the collection. This is partly due, no doubt, to the "seriousness" of the film, with the ambitious smuggling of thinly veiled Vichy critiques into the dialogue. But I think that Joyeux's more dimensional performance should not be discounted in the overall impact that Douce makes. 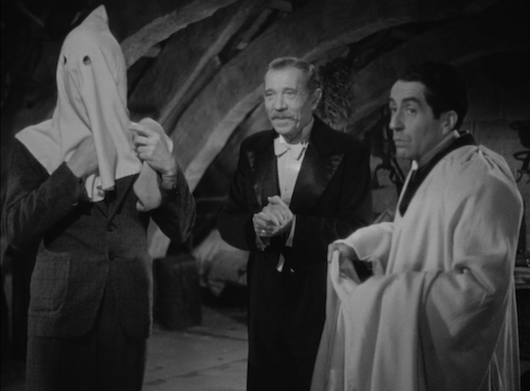 Jacques Tati makes his feature film debut in the set's final film, 1946's Sylvie et le fantôme (Sylvie and the Ghost). Tati plays the ghost of Alain de Francigny, an old-fashioned romantic killed in a duel over a woman. Joyeux plays Sylvie, a young dreamer who fantasizes about Alain's ghost coming to visit her. In honor of Sylvie turning 16 (she's ageless, this Odette, I tell ya), her father hires an actor to play the ghost, to appear at her birthday party. Bizarrely, three men show up for the job. One is an old ham actor (Raymond Rognoni), one is a young thief on the run (François Périer), and the third is a boy who has fallen in love with Sylvie (Jean Desailly). Well, the role requires being hidden under a sheet, so the father figures all three men can have the job. Complications arise when the young thief also falls in love with Sylvie, putting him in competition with Desailly's loverboy -- not to mention, Tati's ghost, who also tries to woo Sylvie despite being invisible and inaudible to the living.

There are lots of enjoyable performances throughout Sylvie et le fantôme -- any business surrounding Tati's character is a physical delight, of course, and Périer is oddly menacing in a way that makes him seem like a wholly different man from the "Hedgehog" of Lettres d'amour -- but the film's sometimes sluggish pace prevents it from being a full-blown hoot. 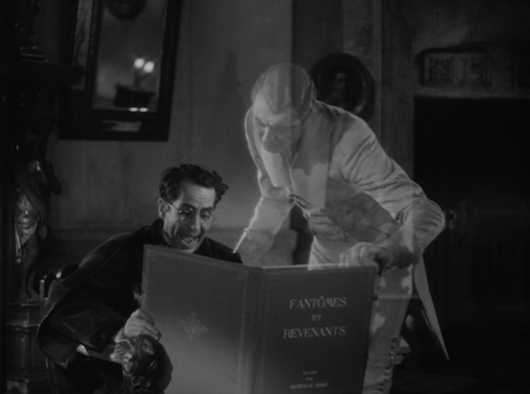 *Autant-Lara is of historical interest for other reasons, including his very public drift from left-leaning sympathies to bigoted fascism in his later years. But you can read about that somewhere else.

The DVD
Each of the four films in this set are package in their own slim cases, featuring liner notes essays by Nicholas Elliott.

The Video:
The Eclipse series' M.O. is that these films are taken from best available sources, which are not always up to the snuff of standard Criterion releases. In the case of this set and its standard 1.33:1 presentations, two films look excellent and two films look less-than-pristine. The bookending films, Le mariage de Chiffon and Sylvie et le fantôme, are the ones that appear to have been remastered from first-rate materials, with strong detail for SD, nuanced contrast, and minimal dirt and damage. Lettres d'amour is a solid digital transfer of dupe-y film materials, that show signs of wear and look a little bright -- the whites tend to wash out. Douce comes from a digital master that has lots of stair-stepping artifacts and noticeable video noise when examined up close. Nitpicky viewers might be bothered by the imperfections of middle two films, but all four presentations are fully watchable without much effort.

The Audio:
As with the image, the French Dolby mono audio (with optional English subtitles) sounds relatively better on the bookending films than on the two in the middle. Still, all four soundtracks are pretty limited and boxy, but they do the trick.

Special Features:
None, apart from the aforementioned liner notes.

Final Thoughts:
The worldwide infatuation with the French New Wave in the '60s basically abolished films like the ones included in this set to footnote status. Freed from that stigma, these four films prove to be charming, touching, and wholly entertaining. The frothy farce Lettres d'amour and the nuanced melodrama Douce are the highlights for this reviewer, but all four films are worth a look. Recommended. 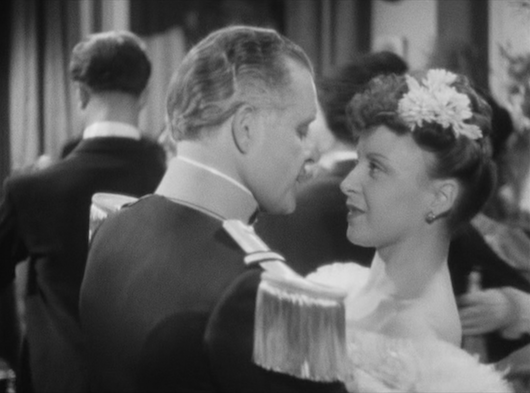