No Orchids for Miss Blandish

A few years later, Britain's Hammer Films, with gothic horror films still in its future, produced a number of low-budget crime thrillers, and like No Orchids for Miss Blandish, would import a dubious Hollywood "star" like Dane Clark or Dan Duryea for one of the leads. Those low-budget, unpretentious films were sometimes fairly good. Miss Blandish enjoyed a comparatively large budget, reportedly $800,000, quite high for a British film of the period, and yet the movie is almost astoundingly awful. Had Ed Wood talked some misguided British producer into giving him $800,000 to make a crime film there, the results could hardly have been any worse.

British-born James Hadley Chase's 1939 crime novel, the first in a long career, was quite successful, prompting a 1942 West End production starring Robert Newton and Linda Travers. George Minter, the managing director of Renown Pictures, envisioned a whole slew of imitation American noir thrillers, but No Orchids for Miss Blandish was the first and last. Scathing reviews and censorship battles over its sexual content and (by British standards) graphic violence limited its distribution, though the controversy fueled its box office where it did play, and the picture made a lot of money in the end. Seen today, the film is entertaining for all the wrong reasons, as unintended high camp. 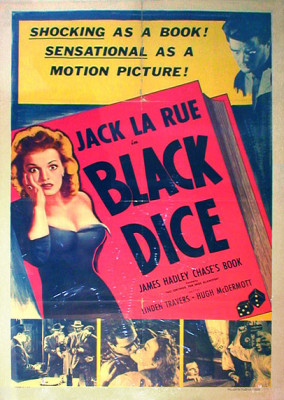 Bored heiress Miss Blandish (Travers, repeating her stage role) refuses delivery of a bouquet of orchids but keeps the accompanying note, unsigned, stating only "Don't do it," apparently a reference to her impending marriage to a rich dullard.

Small-time crooks, including sadistic Riley (Richard Neilson), plan to steal her priceless diamond necklace, but the drop goes south when the would-be bridegroom goes for Riley's gun and shot dead, and then Riley is fatally wounded, too, leaving only Ted Bailey (Leslie Bradley). Left with few alternatives, he improvises a kidnapping scheme - her family, we're told, is worth $100 million - but the more powerful Grisson Gang gets wind of the crime and takes over, with leader Slim Grisson (Jack La Rue) killing Bailey.

Slim, it turns out, has been pining away for Miss Blandish (she has no first name, apparently, and is never called anything else), and the man behind the unwanted orchids. After first imprisoning her in the gang's swanky Black Dice nightclub and raping her, she becomes so attracted to him and his dangerous living that she decides to stay on, willingly, as his swanky moll.

Slim's actions do not endear him to his gangster colleagues, nor does it amuse the police, though hard-boiled reporter Dave Fenner (High McDermott) smells a great story.

No Orchids for Miss Blandish is not entirely unique. Watching this I was reminded of Carry On Cowboy (1965), an amusing if awkward British spoof of American Westerns, with the ensemble cast speaking with outrageously inauthentic accents against absurd, London-based backlot recreations of the Old West. The star of that film, Sid James, turns up in Miss Blandish in a large uncredited role, as a bartender.

That film, however, was a comedy. No Orchids for Miss Blandish is funny for different reasons. Gangsters going soft for a dame is a frequent conceit of the genre - think High Sierra (1940) or Out of the Past (1947) - but the utter lack of chemistry between the two stars is just one of the picture's myriad problems. Travers is pretty but sketchily written and she's fairly expressionless. Clearly, American Jack La Rue was cast because of his resemblance to Humphrey Bogart, and a performance style similar to George Raft. Indeed, Raft replaced him in Howard Hawks's Scarface (1932) after Hawks decided La Rue dominated scenes with star Paul Muni. He worked steadily in Hollywood but typically in small supporting parts, usually playing gangsters. He's not awful but lacks even Raft's finite screen presence, let alone Bogart's.

At least La Rue looks the part. One of Miss Blandish strange endearments is just how wrong so many of the actors look or perform their roles. The character of Riley, for instance, is intended as a trigger-happy sadist, but the actor playing him seems to have based his performance on Bowery Boys headman Leo Gorcey. All that's missing are the malapropisms. Walter Crisham, playing conniving underling Eddie Schultz, isn't bad but looks wrong. He bears a striking resemblance to dialect comedian El Brendel, the loveable Swedish immigrant of early talkies. Ma Grisson (Lilli Molnar) is played by an appropriately large, domineering woman suggesting Ma Barker, but the actress playing her speaks with a thick, unidentifiable accent. She's so dark-skinned I assumed she must have been part Indian a la Boris Karloff, but the IMDb identifies her as Hungarian. She sure didn't sound like Lugosi or a Gabor sister to my ears. Only Canadian MacDonald Parke (Never Take Sweets from a Stranger) as gangster "Doc" comes off less than ridiculous.

The narrative is frequently interrupted by long excerpts from the Black Dice's nightclub acts, including a dance specialty by the Asian team of Toy & Wing, and a terrible comic impressionist, whose imitations of Peter Lorre and Sydney Greenstreet have the nightclub audience in stiches while leaving the movie audience nonplussed.

South African director St. John Legh Clowes made two other dubious features before this, a silent film about tragedy in Lapland and a racing film, both forgotten. Judging from the performances, he was of no help to the actors, and visually has no discernable style short of occasional ineptitude. During the climax, for instance, there's a pointless cutaway to a policeman positioned behind a police car, panning a searchlight that isn't turned on.

Laughable attempts at hard-boiled dialogue abound: "I never count my chickens till I've wrung their necks" and "You crazy rat, you croaked him!" being typical examples. The trailer is similarly ludicrous, cautioning that it's "definitely not for the lily-livered!" Even the film's musical score is awful.

Sourcing British elements, No Orchids for Miss Blandish looks near perfect on Blu-ray, the black-and-white image razor-sharp most of the time and the audio is fine. No subtitle options and the only Extra Feature is a lurid trailer on this Region "A" disc.

Pretty terrible, but hardcore fans of gangster movies and film noir will nonetheless get a big kick out of this, the Ed Wood equivalent of those genres. Recommended.