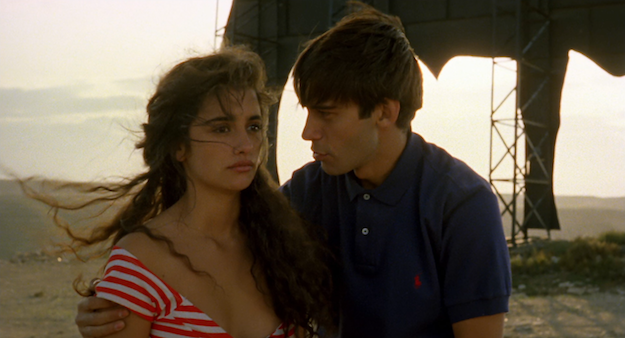 I remember Bigas Luna's 1992 film Jamón Jamón on my local video store's VHS rental shelf distinctly. The cover featured a couple feigning a passionate mingling of their bodies -- the man standing, the woman with her arms and legs wrapped around him -- with a cartoon pig flying in the air above them. (According to what I have found online, stores were allowed to opt for a no-flying-pig option; my local chain clearly went for the pig.) The Spanish film's leads, Penélope Cruz and Javier Bardem, were not international stars at the time, so no one was likely to be bugged by the fact that the entwined couple on the video box were models re-enacting a darkly lit moment from the movie. 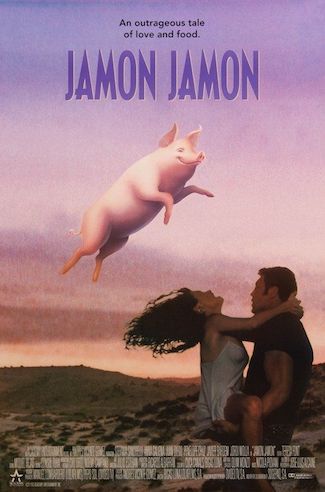 Well, there are no flying pigs in Jamón Jamón. Sorry. (I know my inner younger self is sorely disappointed.) There is sex and nudity in the film, but it's not of the torrid romance-novel variety that the VHS box seems to promise; instead, it's frequently dark, twisted, and absurd. (Per my inner younger self: no comment.)

The action, as it were, is set in a middle-of-nowhere Spanish town whose main industry is the local underwear factory. Young Silvia (Cruz) works on the factory floor and carries on a semi-secret relationship with the factory owner's son, José Luis (Jordi Molla). Silvia's single mother Carmen (Anna Galiena, The Hairdresser's Husband) runs the local bar/brothel, making Silvia an outcast. It comes as little surprise then, when José Luis's mother, Conchita (The Conformist's Stefania Sandrelli), refuses her son's plan to marry Silvia.

Enter Raúl (Bardem). An aspiring bull-fighter who works curing ham (jamón!), Raúl comes to Conchita's attention when he seeks a job as an underwear model. Suitably impressed by his... machismo... Conchita hires Raúl to seduce Silvia away from her darling son. Complications arise when Raúl finds himself legitimately falling for Silvia, as she rebuffs his advances (at first), and when Conchita finds herself seduced by Raúl's earthy sensuality (or maybe just by the bulge in those tidy whities).

The plot has the makings of a soap opera, but Bigas Luna is more interested in class satire, spiced with sexually perverse imagery that is alternately lyrical and absurd. One oddly beautiful sequence features Raúl and his buddy sneaking into the rich folks' bull pen at night -- totally nude -- to practice their bullfighting skills. In one of cinema's more bizarrely documented forms of foreplay, Carmen comes on to a middle-class client by doing a pretty silly call and response with a parakeet. Perhaps most memorably, Silvia's lovers tell her that her breasts taste like ham, which suggests that the double "Jamón" of the title is a coded reference to mammaries.

Director Bigas Luna's storytelling is entertainingly outrageous, but the clear draw for a modern viewer is the appealing performances of Cruz and Bardem who, forgive the cliché, look like babies. Cruz provides the soulful center around which Bigas Luna can build his ludicrous world, while Bardem clearly enjoys the opportunity to play an overgrown kid who tends to think with his small head. Meanwhile, Molla (who later played the villain of Bad Boys II) makes for a perfect privileged prick with no self-awareness. Sandrelli and Galiena, jokingly credited by the film as "La madre puta" and "La puta madre" respectively, both reveal a tangible weariness and ache to counterbalance what are occasionally pretty silly roles. 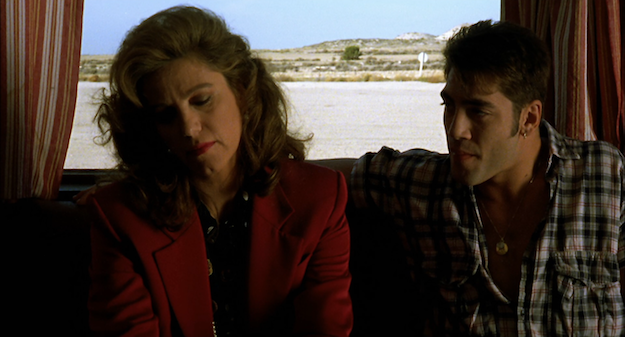 The Video:
This disc's AVC-encoded 1080p 1.85:1 transfer is above average, but it sports enough familiar looking flaws that one is left to assume that this is a fairly old HD master that has been sitting around for a while. Strong colors, and typically strong fine detail reproduction and clarity. Image density varies from scene to scene. No waxy DNR but, on the other hand, wide shots look quite grainy and feature noticeable digital noise. 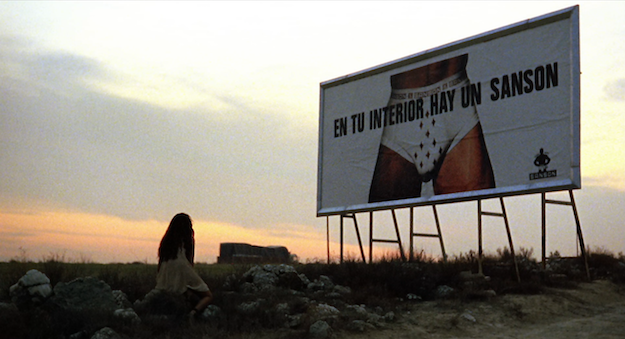