Intended as an epic comedy-Western, sort of How the West Was Won meets It's a Mad Mad Mad Mad World, the picture originally ran as a roadshow, filmed as it was in the Ultra Panavision 70 format, and initially exhibited on Cinerama's huge curved screens.

Shot on 65mm film stock and utilizing an anamorphic lens rendering a 2.76:1 super-wide aspect ratio, Ultra Panavision was, visually and aurally, a very impressive process, rendering a razor-sharp and insanely wide image coupled with six-track magnetic stereophonic sound. Because of the high cost of cameras, lenses (each weighed more than a bowling ball), film stock, and theatrical prints, Ultra Panavision was used on but a handful of movies, notably Ben-Hur (1959), It's a Mad Mad Mad Mad World (1963), Battle of the Bulge (1965), and Khartoum (1966), all of which look spectacular in high-definition. More recently, Quentin Tarantino shot The Hateful Eight in Ultra Panavision, and on Blu-ray it looks great, too. 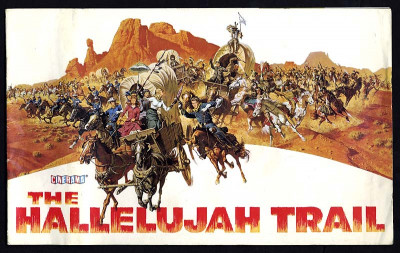 Olive's Blu-ray of The Hallelujah Trail is another story. Rather than approximate the extreme clarity of the Blu-rays noted above, the picture quality in fact is far worse than Blu-rays of movies shot in ordinary 35mm Panavision. Indeed, it's a contender for the worst looking Blu-ray release of all-time. The presentation opens with a logo for United Artists dating back to the laserdisc era, giving every indication that the transfer dates back to the 1990s itself.

It does look better than MGM's 4:3 flat letterboxed DVD, but that's damning it with faint praise. Basically the image quality is on the level of a very poor 16:9 enhanced widescreen DVD. The packaging lists DTS mono audio, and while what's there is reasonably robust and there are some indications that it's actually 2.0 stereo (possibly mono directed to two channels), nonetheless, it's missing all of the original release's directionality and all-encompassing oomph.

So what happened? Olive licensed The Hallelujah Trail from MGM, this despite the fact that MGM had no video transfer up to current Blu-ray standards. Whether Olive did so despite warnings from MGM's tech people or discovered the lack of a useable transfer after the deal was made is unknown. Olive's take-‘em-as-they-come strategy, using whatever latest mastering studios are willing to provide has resulted in some very fine Blu-ray titles (Strategic Air Command, a number of Republic Picture titles including The Quiet Man, and their Betty Boop cartoons) but also some really sub-par releases like The Buccaneer. When Olive announced the Dean Martin-Jerry Lewis comedy Money from Home (1953) last year, the phenomenal team at 3-D Film Archive offered to restore that title as a 3-D Blu-ray and yet the distributor declined, even though the 3-D Archive's efforts have produced popular, high quality restorations at bargain basement prices, far lower than what big studios charge. That release went ahead in flat 2-D and, based on Internet buzz, sold a tiny fraction of what it might have had it been in 3-D.

Olive didn't help matters by promoting the release of The Hallelujah Trail with lines like "photographed in the Ultra Panavision format" in normal type, while on the packaging noting "This film is presented using the best possible elements" in type so tiny I literally had to take out a magnifying glass to transcribe it just now. Not ethical, that. Nor is the title's $29.95 SRP, given Olive's awareness of just how sub-par this release is. I wouldn't be complaining so much had they dumped it onto the market at $5.95.

Despite its big production values and stellar cast (Burt Lancaster, Lee Remick, Jim Hutton, Donald Pleasance, Martin Landau, et. al.), The Hallelujah Trail pretty much flopped when it was new and, unlike, say, It's a Mad Mad Mad Mad World, has never enjoyed the persistent cult following that could, in the eyes of companies like MGM and Olive, possibly justify the high cost of remastering the film in 65mm, let alone spur a true restoration. Other lesser ‘60s era roadshows, like Custer of the West (1967) and Krakatoa East of Java (1969) have suffered similar fates, though Kino's Blu-ray of those titles, while monophonic, look significantly better if far from pristine on Blu.

Conversely, indefatigable restorationists like the 3-D Film Archive's Bob Furmanek and Dave Strohmaier, the man chiefly responsible for Flicker Alley's three-panel and 70mm Cinerama restorations on Blu-ray, have demonstrated time and again that amazingly good work can be achieved with very small budgets, often for films unseen for decades and seemingly unsalvageable.

As the market for Blu-ray shifts further away from the mainstream and into the almost exclusive realm of the same cineastes that supported the laserdisc wave several decades back, distributors like Olive need to get a better handle on that fiercely loyal if sometimes persnickety demographic. Niche labels and big studios alike deserve to be raked over the coals when they botch a release as bad as The Hallelujah Trail, or simply don't listen to the common sense marketing on a title like Money from Home. At the same time, the marketplace of movie lovers needs to support companies like Olive when they do get it right. If you're enjoying The Quiet Man via torrent downloads you're much more a part of the problem than Olive is in using outdated video transfers.

It's very unlikely The Hallelujah Trail will be properly restored or even remastered anytime soon, if ever. So if you're a hardcore fan of the film and just have to have it in the best available format, poor as this is, far be it from me to discourage you. For all others, the presentation is so substandard all I can say is "Skip It."