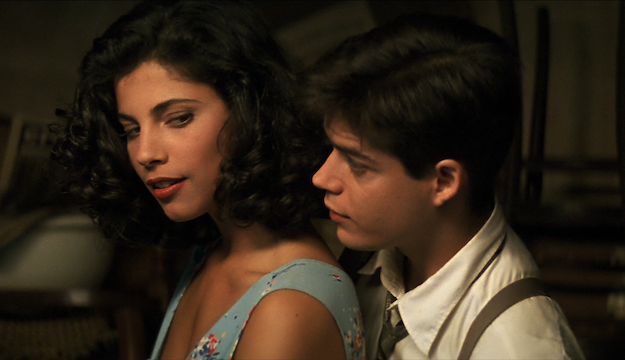 Belle Epoque is a frothy sex comedy from director Fernando Trueba (The Artist and the Model, Chico & Rita) that won the Best Foreign Film Oscar in 1994, besting more serious-minded critical faves like Farewell, My Concubine and The Scent of Green Papaya.

Set in 1931, with Spain on the verge of becoming a democratic republic and the Spanish Civil War still a few years off, Belle Epoque makes some satirical jabs at religion and politics, but mostly focuses on the turbulent and whimsical nature of young horniness... er, I mean, love. Jorge Sanz plays Fernando, an AWOL soldier and seminarian-turned-agnostic. One night, Fernando crosses paths with a crusty old artist named Manolo (Fernando Fernán Gómez), who enjoys the young man's company and his cooking, so he gives Fernando a place to stay. However, in an attempt to keep the proverbial fox out of the hen house, Manolo sends Fernando away when the old man's four daughters are due to visit. However, once young Fernando lays eyes on the ladies, he suspends his intended travels.

He's handsome. They're beautiful. Eventually he lands in bed with every one of them. Maribel Verdú (Y Tu Mamá También) is Rocio, the flirt; she spends most of her time toying with a religious mama's boy who wants to marry her (Gabino Diego), but finds time to succumb to Fernando's sensual magnetism. Ariadna Gil (Pan's Labyrinth) is Violeta, the "man;" she becomes attracted to Fernando only when they both cross-dress at a costume carnival. The sequence where Violeta leads a befuddled Fernando, dressed as a housemaid, through a rigorous tango is the highlight of the film. Director Trueba name-checked Billy Wilder when he accepted his Oscar for this film, and he clearly is paying homage to Some Like It Hot here, with Jorge Sanz doing a delightful conflation of both Jack Lemmon and Tony Curtis from that film. Miriam Díaz Aroca is Clara, the young widow; she feels adrift and hopes to find some solace in the company of a man like Fernando. Finally, Penélope Cruz is Luz, the baby; she has the biggest crush on Fernando of any of the sisters, which just makes her more frustrated when he woos all the rest of them before her.

The performances keep the film light and energized, even as the story begins to wander into less than fruitful directions. The return of Manolo's long-absent wife (Mary Carmen Ramirez) leads to some amusing gags about senior citizen sex and the ignominious decline of operetta in popular culture, but doesn't offer any substantial morsels of character or thematic development.

In total, Belle Epoque is charming, sometimes inventive, but not very thoughtful or deep. No wonder it won an Oscar (*rimshot*).

The Video:
Much like Olive's recent release of Jamón Jamón, this AVC-encoded 1080p 2.35:1 presentation is above average, but seemingly sourced from an old, noisy HD master. Not much film damage, strong color reproduction, nuanced contrast, and decent clarity overall. But wide shots with a lot of details and/or moving parts tend to suffer, appearing less crisp in motion than one might expect from a newer transfer.

The Audio:
The Spanish DTS-HD MA 2.0 stereo audio isn't overpowering, but it is clean and clear, with suitable atmosphere. No distortion -- not even during an upper-register operatic interlude late in the film. Optional English Subtitles, but the default setting on the disc leaves these turned off.

Final Thoughts:
An undemanding sex comedy that owes its considerable charm to its wonderful ensemble cast. If more of the film was as wicked as its gender-swapped tango sequence, I probably would have given this a higher grade. That said, this flick offers enough fun that it still comes Recommended.