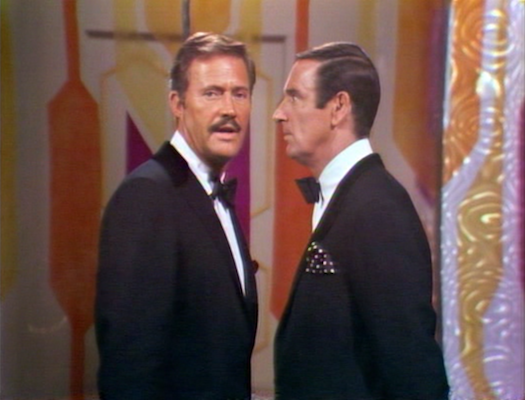 Last year, Time-Life released a complete series box set of the classic neo-vaudeville comedy series, Rowan and Martin's Laugh-In (DVD Talk has a review right here). Now, Time-Life is breaking down the big box into season sets; seasons 1 through 3 are currently available, with season four due in May. Up for discussion currently is the show's second season, which originally ran from September 16, 1968, to March 31, 1969.

Hosted by nightclub comics Dan Rowan and Dick Martin, Laugh-In is an unusual hybrid of old-style showbiz and (then-)modern sensibilities. Sort of a sketch show, sort of a variety show, Laugh-In is essentially a non-stop joke delivery device, which establishes a breakneck comic rhythm through zippy editing. Sketches rarely last more than thirty seconds, and are often peppered with cutaway non sequiturs, delivered by the cast or a bevy of celebrity guests making cameos (John Wayne, Jack Lemmon, Zsa Zsa Gabor, Rod Serling, Phyllis Diller, Tiny Tim, Jack Benny, Lena Horne, Greer Garson, and on and on and on). Some of the jokes probably felt old and creaky 50 years ago, but some of them are unexpectedly timely, such as bits about gun control, the electoral college, police racism, and the pharmaceutical industry, to name just a few. The show is busy throwing so many jokes at the audience that inevitably some work like gangbusters and some are best, well, thrown away.

The first episode of season two features one of the show's most famous moments, in which presidential candidate Richard Nixon utters one of Laugh-In's oft-repeated catchphrases: "Sock it to me." Typically, saying that phrase would lead the speaker to get spritzed with water or smashed with something silly, but Nixon's presence was enough of a joke in this case.

Goldie Hawn is easily the best-known member of the season two cast (Lily Tomlin didn't join the cast until mid-season three), memorable for being a ditzy pixie who laughs through most of her line readings. Show staples like Henry Gibson and Arte Johnson (who I'm not totally convinced are not the same person), Jo Anne Worley, Ruth Buzzi, Alan Sues, and announcer Gary Owens are also present and accounted for. This was the last season for Judy Carne, who was the signature "Sock it to me" girl, constantly getting drenched; she hoped to move on to bigger and better things, but it was not to be. Season two also has an interesting batch of "one-season wonders," such as The Partridge Family's Dave Madden; black stand-up Pigmeat Markham, doing the oft-remembered "Here Come the Judge" sketches; Chelsea Brown, as the other cast member of color on the show; Charlie Brill and Mitzi McCall, doing "fun" bickering couple sketches that are rarely actually fun (sorry, Charlie... and Mitzi); and future Bob Newhart Show regular Jack Riley, popping in a few times during the season to do his LBJ impression.

For a show whose reputation was built on humor that nudged the boundaries of network television, Laugh-In relies on a lot of old-fashioned devices like catchphrases which, besides "Sock it to me," also included, "You bet your sweet bippy," "Look that up in your Funk and Wagnalls," and Arte Johnson's German soldier purring, "Verrrry interesting." It makes watching multiple episodes in a row somewhat less appealing, because the recurring self-referential bits and repeated catchphrases just become monotonous.

That's when the show's more original, left-field moments really stand out. One segment, which essentially presages The Gong Show, is the "Discovery of the Week," in which folks are brought on to display their strange talents. Wild Man Fischer, an absurd street performer that Frank Zappa once signed to his record label, makes a particularly memorable appearance during one of these segments.

So because of the show's repetitive nature -- and the inevitable hit-and-miss quality of each episode -- I feel like season two of Rowan and Martin's Laugh-In is best enjoyed in small doses. But, please, feel free to enjoy it. 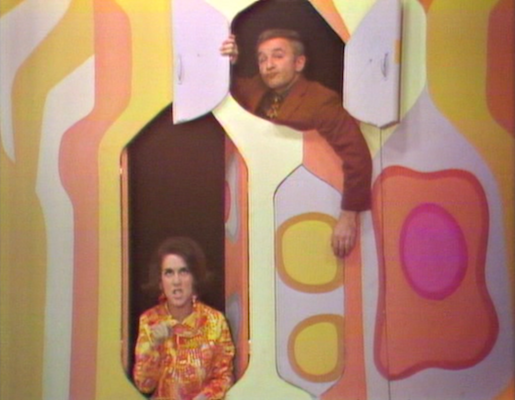 The DVD
The 26 episodes of Rowan and Martin's Laugh-In: The Complete Second Season are presented on 7 DVDs.

The Video & Audio:
As with most old TV shows, the standard 1.33:1 video and Dolby 2.0 mono audio is nothing like we expect today. But recalibrating our expectations for early color TV standards, the presentation is pretty excellent. Not a lot of tape damage or major audio malfunctions. In a few cases, the audio level from episode-to-episode was inconsistent, but we all have volume buttons. The disc offers English SDH, but the few times I sampled it, I noticed more than a few mistakes. Whoever was transcribing these shows must have been speeding through without double-checking the logic of what they typed. Some jokes are spoiled because the transcriber went for a sound-alike phrase that makes no damn sense. I know the show can be random, but not that random.

(20:42) - Originally recorded for the 2004 Best of Laugh-In 2 DVD set. Martin provides a solid summation of the Rowan and Martin comedy team's rise to fame, and the way their TV show came together.

Final Thoughts:
Rowan and Martin's Laugh-In is an odd mix of old-fashioned and new-fangled, silly and smart, broad and pinpoint accurate. It's fondly remembered and unexpectedly influential. There are still plenty of laughs to be gleaned from this season two box set of the old show, but, thanks to a barrage of repetitive gags, I wouldn't subject myself to a prolonged binge again any time soon. Moderate doses of this classic comedy are recommended. 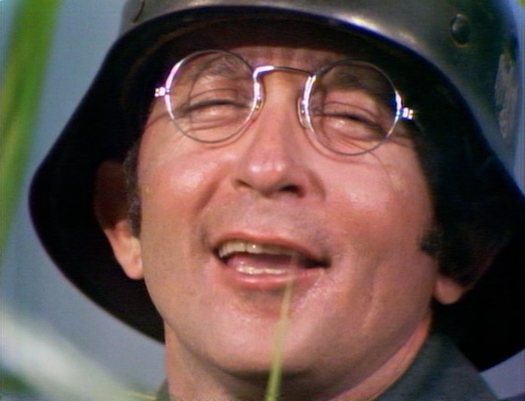