Time-Life releases the seven discs comprising the 1969-1970 season of "Laugh-In" from the complete series set put out last summer separately here. I hadn't seen much of the show aside from a few brief clips and had always wanted to see more of it; I'd even contemplated springing for the big set myself but got a chance to review this individual volume. Unfortunately there's a serious flaw with the picture quality that now makes me glad I didn't buy the whole set, which I'll discuss in the details below, but first some words about the show itself: 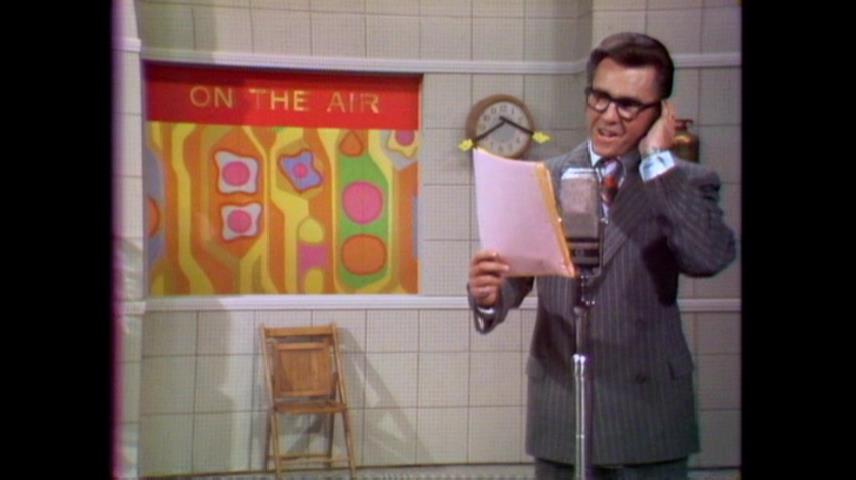 "The Brady Bunch" has always been one of my favorite TV shows from this time period just because of the absurd datedness of most of it, and I somehow assumed most other shows were in the same unashamedly squeaky-clean realm. While undoubtedly a lot of them were, Laugh-In is just about a polar opposite to The Brady Bunch and probably would have been the show I would have more un-ironically enjoyed at the time. The format is quite anarchic for a network show especially back then, with a rotating comedy troupe delivering jokes and sketches at a very rapid-fire pace, with hosts Dan Rowan and Dick Martin with off-stage but still on-camera announcer Gary Owens somewhat attempting to provide some sort of structure to all of it. The earlier shows had included interludes of musical performances by popular rock artists, but they had dispensed with that by this season to keep the laughs coming non-stop during the hourlong time slot.

The main cast members included Goldie Hawn, who played a ditzy-blonde act but seemed in on the joke, straight-faced Henry Gibson, and the rather loud Jo Anne Worley. Lily Tomlin joined the cast mid-season and did a recurring act as Ernestine the telephone operator, doing one-woman sketches (you couldn't hear who she was talking to) exemplifying how frustrating the country's only phone company at the time was to deal with- extorting huge service charges for example. NBC personalities such as Johnny Carson and Ed McMahon regularly dropped in, sometimes only for a few seconds, while an untold number of guest stars appeared as well- just a few in this season include Peter Sellers, Ringo Starr (not quite subtly promoting his new movie The Magic Christian) and Sonny and Cher. The shows here do attempt to maintain a sense of structure, with some runs of skits having a common theme, one segment simply called "Quickies" and a look at the news including a prediction of 20 years into the future, 1989 (often they say that Los Angeles has been completely overtaken by smog that year.) The show is perhaps best known for "The Party", where the cast go-go dances with quick-cuts around everyone until the music stops, everyone freezes and the camera quickly zooms into seemingly randomly-selected performers who then deliver a quick joke, then the dancing resumes for a bit and the process repeats. The one I just randomly checked for an example has Rowen asking Goldie Hawn if she saw the canals in Venice- she replies "Well, when I was there they were all underwater." The humor ranges from corny jokes like that to jabs at current politics (especially then-President Nixon) and pop culture, with Gore Vidal and Myra Breckenridge referenced more than just a few times.

Looking at this now, it's still amazing to see how they could keep this up on a weekly basis for an hour at a time. Some of the gags last literally just a few seconds, with scenery and costumes that likely took a great deal more time to set up. While the material certainly held my interest throughout, it seems to be ideal viewing for those with short attention spans as well since one can easily glance at it for just a few seconds at a time without having to keep the entire episode in context- and this was long before smartphones, cable or even remote controls being commonplace! 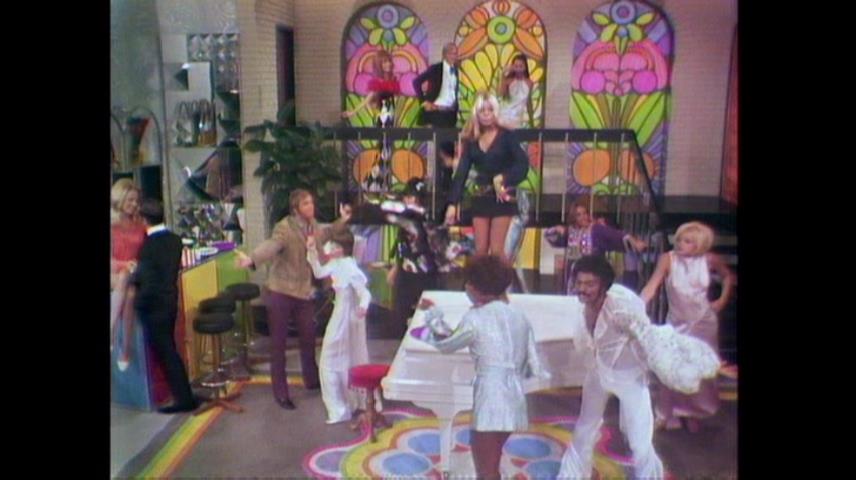 As enjoyable as these shows are, there's a definite flaw in the mastering here that puts quite a damper on things. Each disc begins with Time-Life's usual message: "Due to the age and nature of the film elements, you may notice occasional flaws in the image and sound quality. Wherever possible, we have sought out and restored the original elements to ensure the best possible quality." These shows were produced entirely on videotape however with just a few very brief filmed bumpers, and from the first minute I could tell something wasn't right: the frame rate has been altered from its original 30 frames per second, which is the same as live TV, to a more film-like 24 frames per second which appears choppy, similar to most YouTube videos which look that way due to technical limitations of online video (which are finally improving). As one episode on a recent Time-Life Carol Burnett Show set had a similar issue but the rest remained as they should be, I had hoped that would be the case here but astoundingly ALL 26 episodes in this set are affected and I have heard that all of the other seasons have been as well. Equally baffling is that it seems that some have not noticed this flaw, acknowledging that it does not look "perfect" but that any flaws are likely due to the age of the material. However this problem has nothing to do with how old the master tapes are- this is a DIGITAL mastering error plain and simple. I have seen other more recent material, mainly concert videos, processed this way intentionally (HD video cameras can even be set to shoot either 24 or 30 frames per second) but I've never heard of this being done in 1969. The results were at times rather painful to watch, with the quick zooms appearing jerky and some of the quick cuts being briefly divided across the middle with one shot on top and the next on the bottom. The analog video effects, something I always enjoy looking at, suffer the most as an entire video field of them is thrown out. I was so bothered by this that I tracked down still-sealed copies of the older Rhino Laugh-In DVDs, which can be gotten cheaply now that these Time-Life discs are out, and those ARE presented in the proper frame rate looking like live video that almost could have been shot yesterday. What happened? How in the world did this get past quality control- and not just one, but 140 episodes?

Also baffling is that although the proper 4x3 aspect ratio is kept, all episodes have been re-encoded in true 16x9 format with black side bars as part of the frame. While this will hopefully keep the shows from being watched stretched on widescreen TVs, a bit of resolution is lost as a result of this. A proper 4x3 frame, as the Rhino discs use, is squeezed back to the correct proportions on most modern players with the side bars generated by the player itself- think of it as the reverse of why widescreen standard-def material is ideally encoded in 16x9 (squeezed into the 4x3 frame and then stretched.) I did check one disc on an older DVD player that can be set for a 4x3 TV, and in that case the side bars are automatically cropped out rather than forcing one to watch a smaller image in the center surrounded by black borders on all sides.

The source material itself appears to be mostly in good shape- a few episodes have video noise at the very bottom of the screen, but otherwise very clean with little to no glitching, nicely detailed video for the time with bright colors to shame those who hadn't yet upgraded to a color TV. These shows could have looked great here had it not been for the improper frame rate. 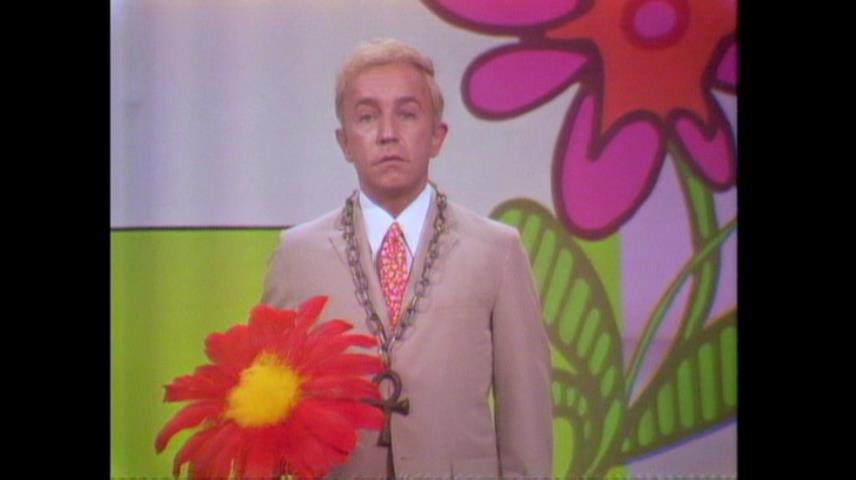 The mono audio is encoded in 2-channel Dolby Digital and stays properly centered. The quality isn't as clean as other video material of this vintage that I have seen, but certainly adequate considering how low a priority sound was on TV then. The volume level varies between a few episodes however, and the sound is noticeably out of sync in the third show.

The discs include both hearing-impaired subtitles and standard closed captions, both containing identical text aside from a few differences in placement. 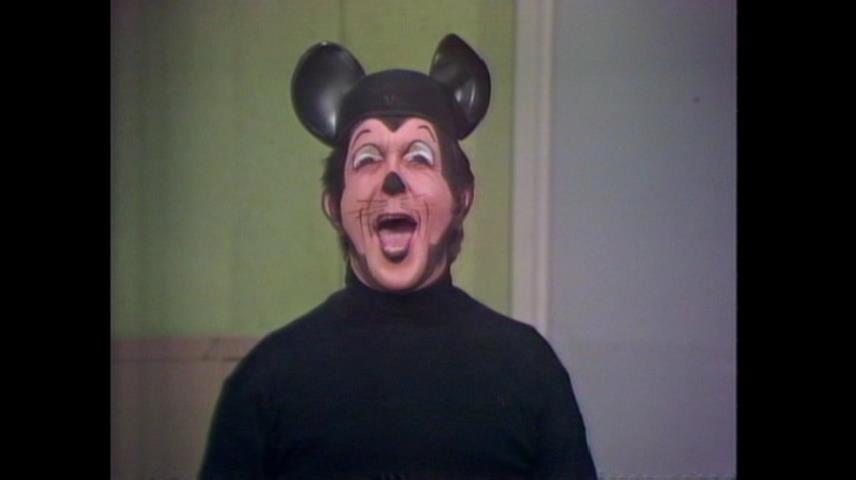 A segment with Lily Tomlin, done for this set, runs about nine minutes where she discusses joining the show and her Ernestine character. There's also a nearly hourlong special, done quite recently although no date is given, titled "Still Laugh-In: A Tribute to George Schlatter" held at Pepperdine University and hosted by Larry King. Many of the Laugh-In cast members appear with Schlatter in the front row. 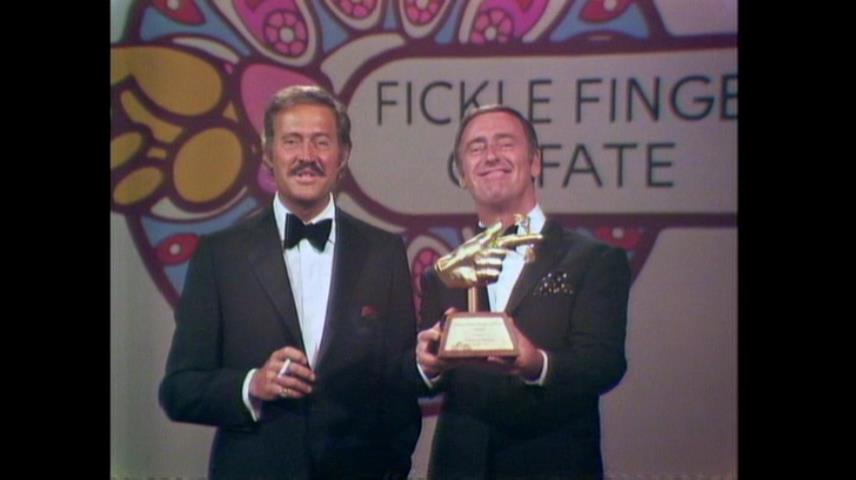 I was quite looking forward to this release, but the botched video is a deal-breaker for me and makes it a late recipient of the Flying Fickle Finger of Fate award. While I was planning on buying the remaining season sets, as they've all been affected I've instead acquired the older Rhino sets and a few of the individual discs from Guthy-Renker that were offered via mail order a few years ago which also have properly mastered video. While some of those shows appear to be missing a few minutes, they look much better than how they are presented here. The best I can give this set is a Rent It for those who haven't seen the show and want to check it out, and then track down the older discs for their collection if they like it.