Half Breed / The Good Bad Man, The 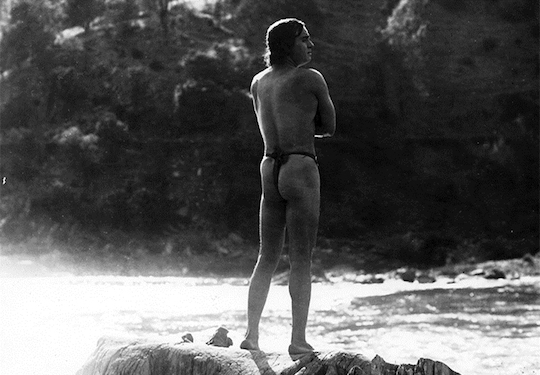 NOTE: The stills accompanying this review are taken from various online sources and do not represent the quality of the Blu-ray under review

Kino serves up a double feature of silent Douglas Fairbanks westerns, The Half Breed and The Good Bad Man, both originally released in 1916 and both directed by Allan Dwan. The films are sourced from recent restorations that were spearheaded by the San Francisco Silent Film Festival and the Cinémathèque française. Because of their age and their convoluted distribution histories, the films still show some wear and tear. But that fails to detract from the enjoyment of these solidly made oaters.

Of the two presentations, The Half Breed reportedly comes closest to resembling the film's original release. Reassembled from three different film sources, including a 16mm reduction print, film restorer Robert Byrne and his team have done an excellent job of putting all the narrative pieces back together in a way that reflects the filmmakers' intentions.

Here, Fairbanks stars as Lo Dorman (a simplified version of the French phrase "L'eau dormante," which means "sleeping" or still water), a man of the woods who was raised by an old white stranger after his Cherokee mother killed herself in despair. He is forced out of his home when the old fella dies, since he's not allowed to inherit the property, which forces him to take up residence inside an old hollow tree in the wilderness.

Lo finds himself ensnared in the goings-on of the nearby town when he catches the fancy of the local preacher's daughter, Nellie (Jewel Carmen). Lo thinks she really loves him, but the truth is she likes how exotic he is. Needless to say, the townsfolk don't much care for a mixed-race outsider taking the attention of their preacher's daughter, so Lo finds himself watched carefully by the local sheriff (Sam De Grasse). Adding more melodramatic circumstance to this triangle, we are told early on that the sheriff is actually the white man who broke Lo's mother's heart and left him a bastard.

Fairbanks's portrayal of Lo is earnest and soulful, which makes him a sympathetic dramatic presence and makes the film easy to watch. The story, which was presumably progressive for its day, inevitably features attitudes that feel distinctly dated now. For example, the film introduces another love interest, a low-class outcast played by Alma Reubens, who becomes the more suitable alternative for a man of Lo's station (low station?).

The film climaxes with a forest fire sequence that feels oddly unmotivated, but is impressive nonetheless. 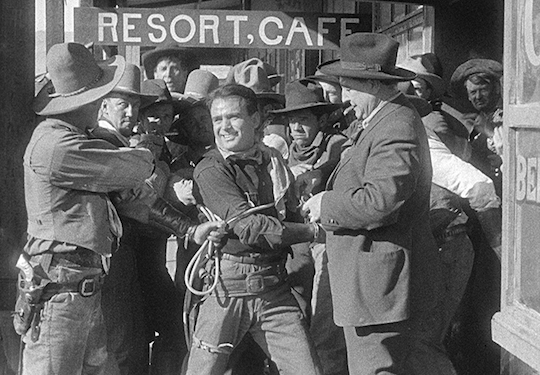 The second film, The Good Bad Man, is presented in a version based on a surviving 1923 re-edit that trimmed the running time to 50 minutes. Call me a philistine, but I slightly prefer the snappier pacing of this abridgment to the more fully restored first feature, which runs roughly 70 minutes. Yes, upon reflection, The Good Bad Man clearly suffers from having some bits of story and character development removed. But the character dynamics here are so archetypal that we don't need a lot of fleshing-out to hook into the story and have a good time.

Besides shared cast and crew, there are many story similarities between the two films in this double feature as well. Here, Fairbanks plays an outlaw named "Passin' Through," a kind of Robin Hood who gives most of his spoils to boys without dads. As in The Half Breed, this is because he never knew his father, and though his mother never talked about it, he assumes that he is a bastard. In his travels, he meets the daughter of a crippled outlaw (Bessie Love, absolutely adorable), whom he wants to marry and take away from her down-and-out situation. But, by falling in love, Fairbanks puts himself once again in the cross hairs of a heavy played by Sam De Grasse, now a cold-hearted gang leader nicknamed "The Wolf."

I won't spoil the revelations about Passin' Through's parentage, or about whether he will have to kill The Wolf or kiss him, because I got a charge out of these little twists. I will say that the whole dern thing culminates in a massive shoot-out between a posse of good folks and a posse of bad folks that oughta satisfy folks in the mood for a rootin' tootin' good time. 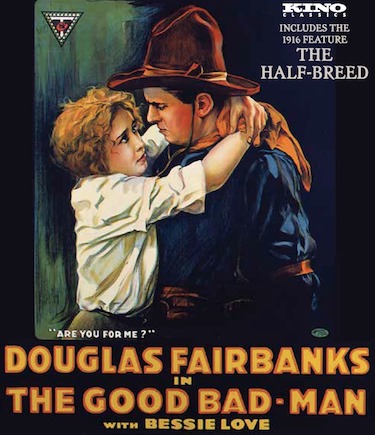 The Blu-ray
Kino's double feature of The Half Breed and The Good Bad Man comes with reversible cover art that highlights poster art for either film. This is handy for those who prefer to think of The Good Bad Man as the "A" picture in the set, rather than the supporting feature.

The Video:
Clearly, a lot of loving care and technical know-how has gone into these AVC-encoded 1080p 1.33:1 presentations. As I mentioned above, The Half Breed comes from multiple sources, of varying quality. So inevitably that means scratches, some minor tears, and some degraded emulsion. That said, the restoration team has done a great job of providing a consistent visual grading to tie together all these sources. Clarity is quite good for the era, and the film grain looks great in motion. The Good Bad Man comes from a single print, and is even more consistent. It's generally cleaner too, with less scratches and tears. Contrast is occasionally a bit muddier, but presumably this is due to this single print being edited together from multiple duplicated generations of the film. Fun fact: future Gone with the Wind and The Wizard of Oz director Victor Fleming was the cinematographer on both of these films.

The Audio:
Donald Sosin provides musical score in LPCM 2.0 stereo audio. Most of it is piano music, although some string instruments appear briefly during The Half Breed. Elegantly composed and crisply recorded.

- A lively and entertaining pair of discussions with Douglas Fairbanks biographer Goessel and film preservationist Byrne. Clearly, these two are good friends and it comes through in the recording. They tend to alternate between production anecdotes and information about the recovery and restoration of each film. Fascinating stuff.

Final Thoughts:
It's a genuine pleasure to get a chance to check out these neglected westerns featuring silent superstar Douglas Fairbanks. Besides their clear historical value, these two films are well-made entertainments. The restoration work that has been done to revive them is admirable, and the supplements nicely round out this whole package. Highly Recommended. 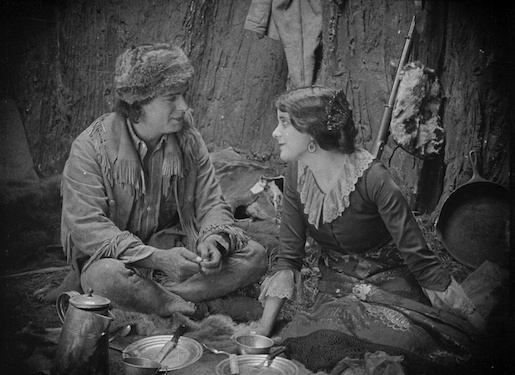