Olive Films // Unrated // May 29, 2018
List Price: $29.95 [Buy now and save at Amazon]
Review by Stuart Galbraith IV | posted June 19, 2018 | E-mail the Author
Until literally the final 90 seconds or so, director Robert Wise's Odds Against Tomorrow (1959) is a taut, subtle, and original crime thriller, made at the very tail end of the classic film noir cycle. Its premise resembles other great noirs like The Asphalt Jungle (1950) and The Killing (1956), but Wise's execution of the material is uniquely his. Watching Olive Films' excellent HD transfer, licensed from MGM, I kept noticing visual and aural devices that, peculiarly enough, Wise would turn to again for The Haunting (1963), his classic ghost story. For instance, much of the film is shot using infra-red black-and-white film stock, creating moody dark skies looming oppressively over the landscape, much as they do in The Haunting's exterior scenes. The often discordant jazz score adds to the effect, and in one sense Odds Against Tomorrow is a kind of crossroads movie, bridging American-style classical noir with the French-made noirs of Jean-Pierre Melville, Claude Sautet and others.

Both Wikipedia and the Internet Movie Database claim this was Wise's "last film shot in Academy ratio," but that's incorrect. Olive's 1.85:1 widescreen version is more obviously right than "full-frame" 1.37:1 versions shown on TV and elsewhere. Possibly 1.66:1 might play better than 1.85:1, but modest cropped widescreen serves the compositions much better than 1.37:1 standard frame. 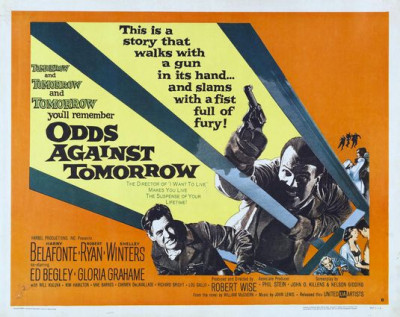 In New York City, disgraced veteran cop David Burke (Ed Begley, Sr.) has hatched a robbery plan and attempts to recruit violent, racist ex-con Earl Slater (Robert Ryan) and divorced gambling addict Johnny Ingram (Harry Belafonte). Though Burke insists his one-roll-of-the-dice scheme is certain to net each man $50,000, Slater refuses to partner with a "nigger," and Ingram doesn't want to risk further damage to his relationship with his ex-wife (Kim Hamilton), whom he still loves, and their daughter.

However, Oklahoma-born Slater is bitterly unhappy about sponging off his clingy, adoring girlfriend, Lorry (Shelley Winters), and, given his age (Ryan was about 50 at the time), begins to think the robbery may be his last shot at getting ahead in life. Meanwhile, a desperate Burke forces Ingram's hand by having mafia moneylender Bacco (Will Kaluva), call in Ingram's $7,500 gambling debt.

Burke's scheme is ingeniously simple but not thought through in other ways. In upstate New York, Ingram will masquerade as the black waiter whose take-out supper Ihe delivers nightly to a side door at the town bank.

Classic noir and French New Wave heist stories almost never end well, but Odds Against Tomorrow's threesome haven't a prayer, obvious from the get-go. Ryan's Slater is a walking time bomb of barely-contained rage. Adding to his humiliation as a kept man, Lolly's kindness and understanding only makes him more hostile. A show-off at a bar (Wayne Rogers, very good in his screen debut) lights his short fuse, the man taunting Slater unaware of his easy-to-imagine manslaughter conviction. Even when seduced by a neighbor (Gloria Grahame, in what amounts to an extended cameo), when she asks him, "What was it like to kill a man?" one can almost hear the movie audience whisper "Oh, shit!" to themselves, knowing that she's pushing his buttons in exactly the wrong way.

Slater's racism toward Ingram plays a key role in the heist's unraveling, but it's not front-and-center in the Stanley Kramer manner, at least until those last 90 seconds, when the film becomes uncharacteristically preachy and obvious. It doesn't ruin all that came before it, but it's nevertheless a big disappointment. It also doesn't make a whole lot of sense. Slater may be racist, but he pretty much hates everybody, even those like Lolly trying to help him. Ingram resents "living in a white man's world," and resents his ex-wife's efforts to integrate into what appears to be some kind of upwardly-mobile, mixed-race PTA group. But race is not at the heart of this story.

Belafonte's Harbel Productions produced this and The World, the Flesh, and the Devil (1959), which gets similarly preachy, though much earlier in the story, spoiling a strong first half and likewise wrapping things up with a truly terrible ending. The singer-turned-actor holds his own with Begley and Ryan, the latter one of the screen's great actors. Belafonte's innate charm makes Ingram more sympathetic than possibly intended, but he's still a loser. The screenplay sort of addresses this: his ex-wife nearly succumbs to his obvious desire for a reconciliation, yet she constantly pulls away from him, knowing nothing good can come from it.

The primary author of the screenplay was blacklisted writer Abraham Polonsky, his screen credit originally going instead to a front, African-American novelist John Oliver Killens. The Blu-ray restores credit to Polonsky, but as I've noted in other reviews, this practice by the Writers Guild of America and the Academy of Motion Picture Arts & Sciences does more harm than good. While admirably trying to right a wrong, it simultaneously vaporizes any trace that a great injustice ever occurred. What should be done in these cases is to precede such films with a title card acknowledging the actual writer, followed by the movie as it was originally released. Otherwise, the motion picture industry is simply rewriting its own history.

Other components add to the film's distinctiveness, notably the unique title design, the editing by Dede Allen, and the score by Modern Jazz Quartet founder John Lewis. Milt Jackson, Percy Heath, Bill Evans, and Connie Kay are among those heard on its soundtrack.

Olive Films' 1.85:1 widescreen presentation of Odds Against Tomorrow looks great, the sharpness of the black-and-white images particularly bringing out the subtleties of Ryan's and Begley's performances, and the bleakness of the urban and rural landscapes. The DTS-HD Master Audio mono is fine, supported by optional English subtitles, and the disc is Region "A" encoded. No Extra Features.

Superbly directed and acted, Odds Against Tomorrow is a great, late noir with a look and feel all its own, and is Highly Recommended.